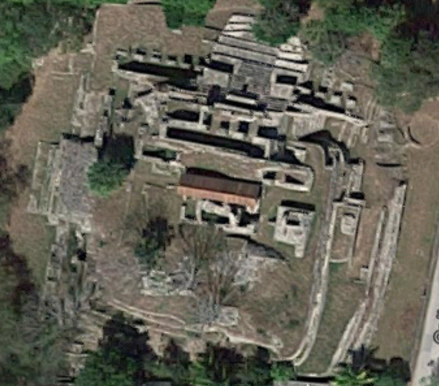 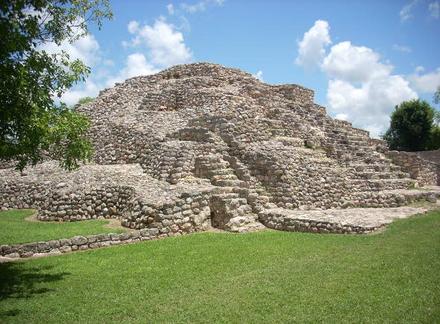 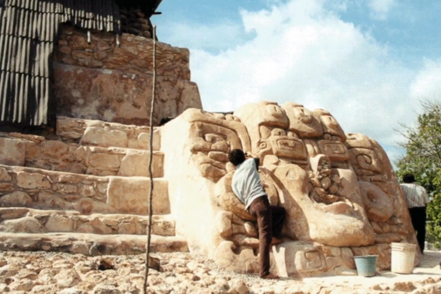 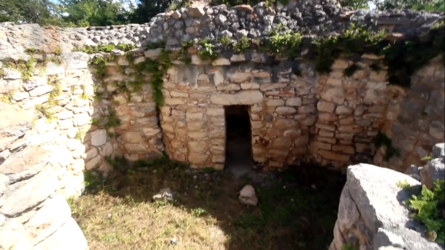 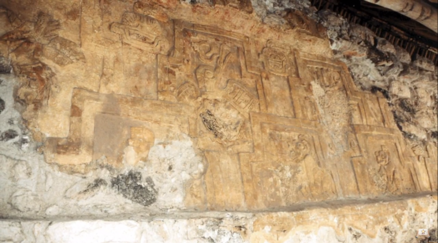 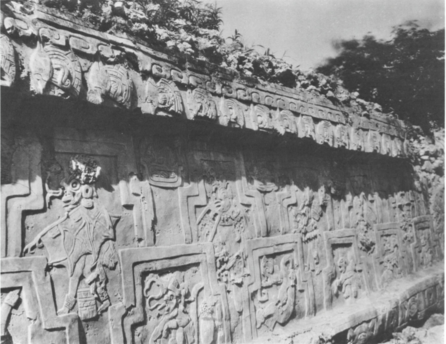 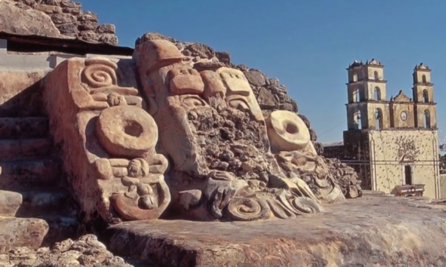 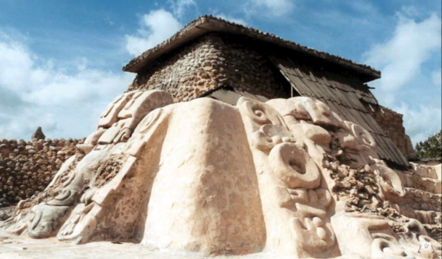 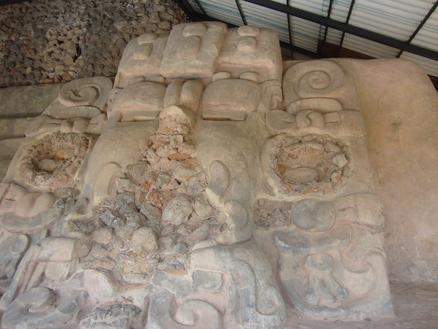 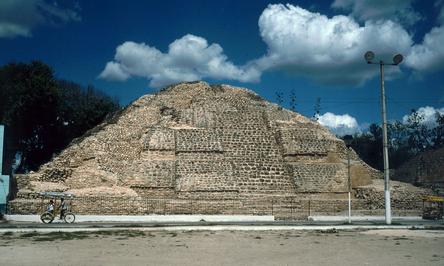 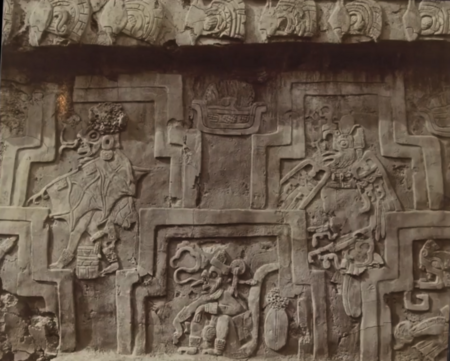 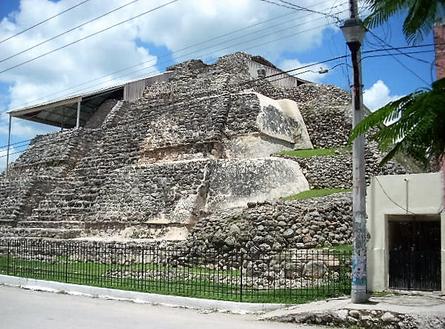 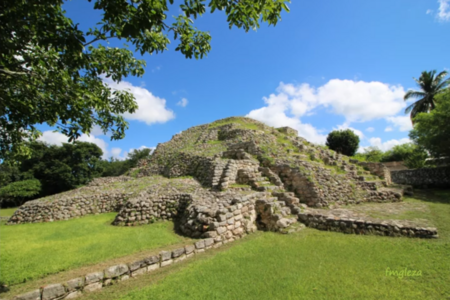 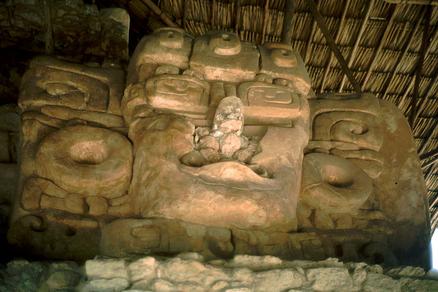 DESCRIPTION
Acanceh, “moan/lament of the deer” in Yucatec Maya, is a compact yet important archaeological zone. Recent evidence has suggested that the original name of the site may have been A’Kan’Keh. It is located on Highway 18, 15 miles/25kms southeast of Merida, in the present town of the same name. The site consists of two main groups, and is hard to miss being situated along the northern edge of the town plaza. The plaza itself is a much smaller version of what once existed in the ancient city.

Today the main pyramid complex is bordered by commercial buildings and a church. The Acropolis containing the notable Palace of the Stuccoes is located a few blocks south of the pyramid in a residential area along Calle 18. The time period of the site’s main occupation and construction dates from the Late Pre-Classic through the Classic (350 B.C-900 A.D.), though the site has been continuously occupied to the present.

HOURS: 8A.M.-5P.M
ENTRANCE FEE: U.S. $3.50/65 Pesos
GUIDES: Yes. No fixed rate, but be generous. This is a small town
SERVICES: None, but you are in the center of town.
ON-SITE MUSEUM: No
ACCOMODATIONS: Local hostel, but you are a short drive from Merida
MISC:

HISTORY AND EXPLORATIONS
The history of Acanceh is not well known. There are no known stelae (free-standing carved stone slabs) or other glyphic inscriptions that can help identify its rulers or associations with other city-states. What is known of its time frame has been deduced from the examination of pottery fragments, burials and architectural styles.  Archaeologists and researchers have made associations with the central Mexican highlands; Tikal in the Peten region of Guatemala; and the site of Dzibilchaltun to the north. Being so near to Merida, ancient T’Ho, it is hard not to imagine a relationship with that site as well. Acanceh, unlike most others, was never fully abandoned as it is mentioned in a number of sixteenth and seventeenth century sources.

The first modern report was made by Desire Charnay in 1888. Adela Breton visited the site in 1908 and painted a full-size color copy of the famous frieze at the Palace of the Stuccoes. Teobert Maler also visited in 1908 and took several photos of the frieze which have been of great value in helping to understand the composition and nature of the frieze which has since dramatically deteriorated. There followed Edward Seler 1911, T.A. Willard 1928, Miguel Fernandez 1933, George Brainerd 1958, and Andrews IV 1965, among others. INAH began consolidations and restorations in 1996 which continue to the present time.

STRUCTURES
Acanceh is located within the current town of the same name. Consequently, the site has been severely quarried for its finished and rough stone, and numerous structures destroyed or buried beneath modern housing. One has to only look at the numerous stone walls surrounding the residences to see where much of the stone ended up. Acanceh is, of course, not the only site to have met this fate. That said, there are three groups of structures that have been preserved.

The first group to report on contains the main pyramid that fronts the north side of the plaza in the center of the modern town, Structure 1. It was first unearthed and explored by Teobert Maler in 1908. The base measures about 100 feet/30 meters square, and the height has been calculated at about 36 feet/11 meters. It has rounded, inset corners, apron moldings and recessed stairways. An early sub-structure exhibiting large sun-god masks of K’inich Ahau has been uncovered near the top of the pyramid. Two masks flank each of the four main stairways and were originally painted red. Though vandalized, they are still very impressive and resemble very closely those found at the site of Kohunlich 170 miles/272 kms to the south, and at Izamal just to the north.

On the east side of the substructure a smaller, inset stairway leads up to an inner chamber. A burial was discovered under the chamber floor which held the remains of a male and female, presumably of noble lineage. What is really striking here is that there is a fair amount of original smooth stucco remaining on the pyramid surface, especially the inner stairway, which helps to show how these structures looked in their finished state when actually in use. The sub-structure has been dated to the Late Pre-Classic (300 B.C.-200 A.D.).

​
The upper portion of the pyramid was once protected by a thatch roof. Unfortunately during a town celebration a few years back fireworks set the thatch ablaze resulting in damage to some of the stucco decorations. These were restored, and a metal roof installed in its place. Behind this pyramid is a four-tiered pyramidal structure, Structure 1B.

Structure 1B is just to the northeast of the main pyramid with which it forms a courtyard. It is smaller, about 15 feet/4.5 meters in height, and has centrally positioned south and north facing stairways. A ruined masonry chamber crowns the summit. A third pyramid that surrounded the plaza was reported on by Desire Charnay in1881, but was dismantled to build the local train station. No drawings or information on this structure survives.

The other significant structural complex to be seen is the Acropolis. This is a massive platform supporting the remains of numerous buildings. It measures roughly 163 feet/50 meters square with a height of 26 feet/8 meters. Early reports mention structures with interior chambers that once depicted now lost painted murals.

The most significant structure is the Palace of the Stuccoes. This building, containing four vaulted rooms, was unearthed in 1906 by local residents quarrying the site for building material. This practice, unfortunately, has been going on for centuries, and many sites have been severely disturbed while others completely destroyed and their history lost.

Contained on the upper north facing facade of this structure is a magnificent stucco frieze unique in all the Maya World, both in style and theme. It exhibits a fabulous display of intricately molded stuccoed deities, animals and birds, either in natural or anthropomorphic form, and all once brightly colored. It measures about 5.5 feet/2 meters in height by 49 feet/15 meters in length. At the time of its discovery there were 20 figures identified with an additional one thought destroyed. It was divided into two rows, was painted in brilliant colors, and in near perfect condition. Through neglect and vandalism, it is now a pale shadow of its former self with many of the figures obliterated.

The frieze was first reported on by Adela Briton in 1908. Her colored paintings, and the photos taken by Teobert Maler later that year, are the best-known resources for interpretation. The frieze is flanked by two large anthropomorphic birds whose wings contained flaked limestone chips imbedded into the stucco to simulate feathers. A series of 21(possibly more) cartouches are divided in a staggered fashion into two registers. The upper register shows mostly birds and animals that either fly or live in treetops, while the lower register exhibits terrestrial animals. Two individuals interspace the scene which has both an upper and lower border.The upper border displays Central Mexican water/rain symbols, while the lower border may exhibit astronomical symbols. On the lower register, a squirrel that is depicted is very similar to one seen on the beautiful frieze located at Balam Ku. One can only imagine how incredible this may have looked in its entirety if the frieze continued around the structure as some have suggested.

The frieze has baffled archaeologists as to just what it may represent. Some believe it could have astronomical connotations relating to the Zodiac. Others think that the figures may represent spirit companions, or that it is a depiction related to the Underworld.

A small structural group has recently received some attention. Structure 6 has been deemed an underground observatory, and dates to the Early Classic Period (200-600 A.D.). The semi-circular structure is set within a raised platform base, though the observatory chamber itself does not penetrate below ground level. During the equinox the Sun enters through an opening in the stone roof and displays no shadow to those gathered below. Venus has also been associated with this structure as certain orientations of maximum elongation of the planet conform to its physical layout. A most intriguing and rewarding site.                 (update February 2020) 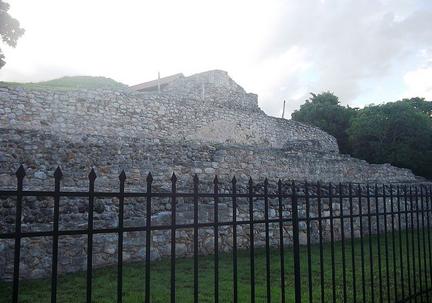 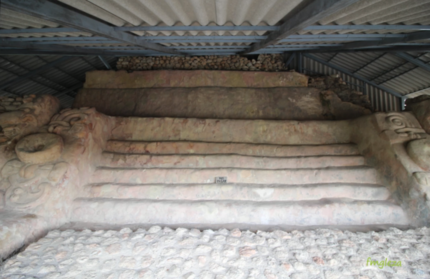 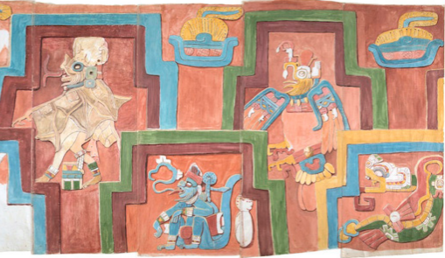