DESCRIPTION
Ake, Place of Reeds in Yucatek Maya, is a nicely preserved, archaeological zone located in the state of Yucatan. The original name of the site is unknown though an emblem glyph associated with the site has been discovered that could help. The glyph contains a hand holding a fish which means “conjurer of clouds, storms, and winds” in Yucatek Maya.

The site is situated within the town of (Ruinas de) Ake, and consists of four groups accessible to the public. Portions of the site are located within a colonial church compound which provides its own paid tours, as well as on the property of an old henequen hacienda. A small, working henequen factory is situated next to the main core area.

The site exhibits an architectural style known as “Megalithic”. This style incorporates huge blocks of stone in the design of the structures with the corners of the structures nicely rounded. Another feature is protruding slabs that run at intervals around the circumference of the structure. These features can also be seen at the nearby site of Izamal.

There are the remains of two walls that once enclosed the site. A number of sacbeob (raised white stone roads) are associated with the site. One of these lead to the ruins of the important pilgrimage site of Izamal, and has been partially restored.

HISTORY AND EXPLORATION
Ceramic evidence points to the early settlement of Ake in the Late Pre-Classic period (300 B.C.-200 A.D.). The structures one sees today date from the Early Classic (200-600 A.D.), and are very similar to those found at its larger neighbor Izamal. A sacbe leads out from Ake 20 miles/34 kms to this important site. The site was populated into the Post Classic (1100-1450 A.D.).

There have been no stelae (large carved stone monuments) or other hieroglyphics inscriptions found at Ake to determine its political/economic relationships to other sites, though it has been suggested that it was a dependency of Izamal. Ceramic evidence points to contacts with other sites such as Rio Bec to the south, Coba and El Meco to the east; and Dzibilchaltun and Oxkintok to the west.

The site was first reported on by those intrepid explorers extraordinaire, John Lloyd Stephens and Frederick Catherwood in the 1840’s. There followed other explorers such as Desire Charney in 1887, and Teobert Maler in the 1885-92. Modern explorations, excavations and consolidations began in the 1960’s with restorations undertaken by INAH in the 1979. A current project has been ongoing to further consolidate the structures, and to obtain a better understanding of the cultural nature of the site.

STRUCTURES
The core area of the site is centered about a huge, slightly raised plaza typical of the Maya, and is called here the Grand Plaza. They loved expansive open spaces, and this one measures 254 feet/77 meters x 430 feet/131 meters.

The most notable structure here is Structure 1, also known as the Temple of the Columns, and is on the north end of the Grand Plaza. This very impressive palace type structure runs 341 feet/104 meters long on an east west axis, and is 113 feet/ 34 meters wide. The extremely wide stairway (148’/45m) is constructed from large rectangular blocks typical of “Megalithic” architecture, and rises to a height of about 55 feet/17 meters. A flat surface runs across the top of the structure which contains three series of large block columns that at one time supported the largest roof in the Maya World. The column blocks themselves are about 4 feet/1.5 meters square in width, and are stacked atop one another to a height of about 10-12 feet/3-4 meters. A band of smaller stones, termed chinking stones, were interspersed between the larger blocks for structural support.

Structure 2 is the main pyramid and forms the west side of the Grand Plaza. Its construction contains 3-4 levels having terraces wrapping around the outer walls at each level. The summit of the pyramid is an uneven surface having the unexcavated remains of smaller structures. There are stairways that appear on the North, East, and South sides of the pyramid, with only the East stairway reconstructed. The corners of the pyramid are all nicely rounded. “Megalithic” slabs extend out from the pyramid sides on the different levels, and some appear to overhang recessed rectangular spaces. These spaces may have contained colorful murals or perhaps sculptured figures. The pyramid is about 384 feet/117 meters x 200 feet/61 meters at its base. The height is about 49 feet/15 meters.

There are some small structures that front the pyramid on the north side. The most interesting is a perfectly round structure on the Northwest side. This has a diameter of around 25 feet/7.5 meters. Its possible use is unknown to this writer.

The East side of the Grand Plaza features another long palace type structure, here named Structure 4, though not nearly as high or as impressive as the Temple of the Columns. Still, it manages to inspire in its own right. The platform base measures about 317 feet/97 meters in length, and rises to a height estimated at around 20 feet/6 meters. There are a number of stairways that lead to separate structures that run along the length of the platform. The upper level is in a ruinous state, and therefore difficult to determine the nature of the many rooms and chambers that once existed, and whether any had a stone corbeled roof. The rear of the structure is engulfed in forest, though a portion of the platform base on the north end is visible and is about 20 feet/6 meters deep. It is possible that a plaza platform extended out to the east.

In front of Structure 4 are the ruined foundations of a few structures along with some contemporary piles of stone rubble. Another smaller circular structure is located at the foot of Structure 4. Just to the north is another low platform with a central set of steps. No stone structures appear to remain.

On the west side of Structure 2, the pyramid, is a raised plaza that extends out to the West, here called the West Plaza. This plaza is noticeably higher than the Grand Plaza base. There are a number of structures that are located here. Immediately to the west of the pyramid are two structures that are on the north and south sides of a westward passageway. These are in a ruinous and unrestored state, with the north structure a forest covered mound. Structure 3 is located at the western end of this plaza.

Structure 3 is a temple type structure that is first viewed when entering the archaeological site. It is on a platform base that rises up on a series of low terraces until it meets the height of the West Plaza at about 8 feet/2.5 meters. This structure has similar features as the Temple of the Columns, such as a Megalithic stairway and a few remaining square columns. The structure measures approximately 171 feet/52 meters in length, and 105 feet/32 meters in width, with the main stairway extending out another 17 feet/5 meters.

The main stairway is on the north side of the structure and measures 72 feet/22 meters in length. It leads up to a multi-roomed structure that has three entrances between two square columns. Again, all the stone is just massive in scale. The structure has a large central room with adjoining rooms on both the east and west sides. The south side of the structure has the remains of columns that appears to once have supported a wood beam roof, along with an unrestored stairway.

An interesting observation here were the numerous butterflies that circled among the ruins of Structure 3. They make an audible clicking sound as they chase each other about.

A pyramidal structure is located outside of the archaeological zone on the church property and forms part of what is here called the North Group. It is in an unrestored condition and rises about 30 feet/9 meters in height. It borders on the road across from a sports field. The church itself sits atop a huge Maya platform.

In the opposite direction a sacbe leads South from the Grand Plaza a distance of around 727 feet/221 meters, where it takes an east course another 638 feet/194 meters to the South Group. Along this sacbe are the remains of a small platform with what might be a fallen monument, and also the remains of what may have been a base for a formal entry into the site proper.

The South Group is in an unrestored state, and heavily forested. It is set on a very low platform base. The east side of the plaza has the unrestored remains of a long palace type structure that measures about 140 feet/43 meters in length at its base. One of the more significant structures atop the base measures around 50 feet/15 in length. This has a corbeled roof that has mostly collapsed except for the north and south ends. Each end contains a single corbeled room. The rest of the structure is in too ruinous a condition to provide any further information. Across the plaza on the west are some remains, but again too destroyed and forested to make any determination. The northwest corner has a small platform. There are most likely other structures as well that were once part of this group and hopefully will be reported on at a later time.

A notable feature here is the terminus of the sacbe that arrives from the great center of Izamal 20 miles/34 kms to the East. It is located just to the north of the palace structure.​​ 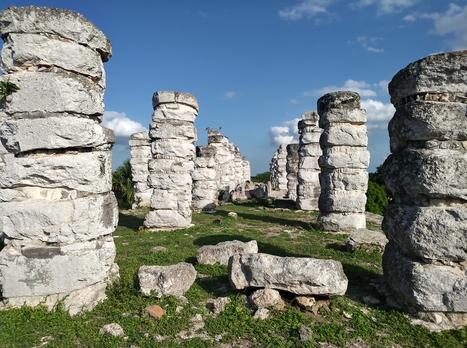 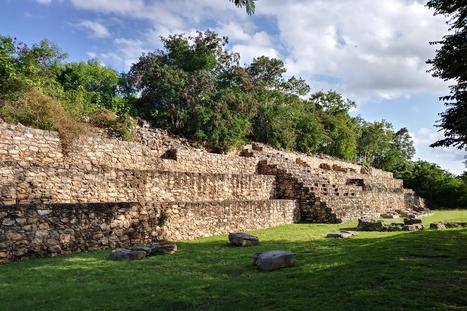 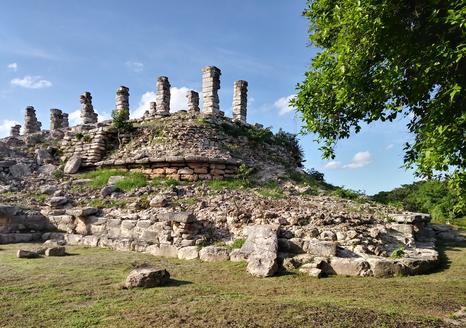 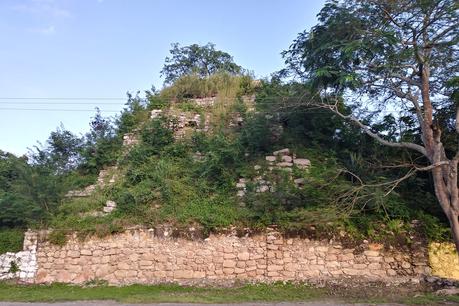 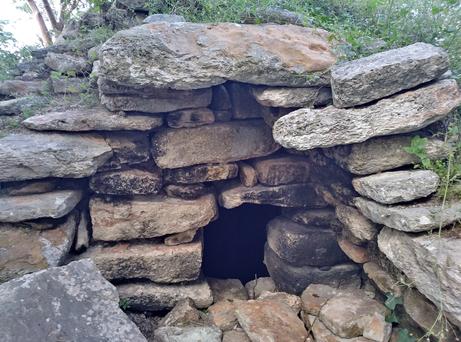 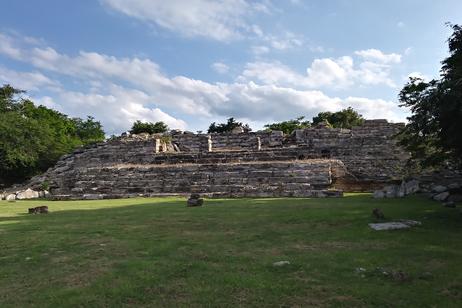 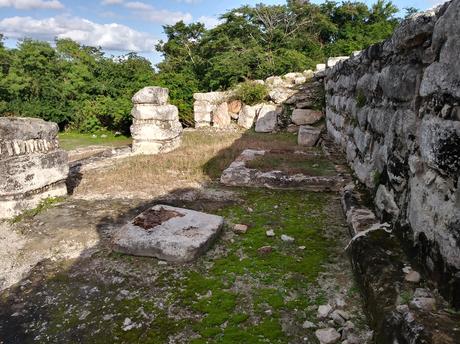 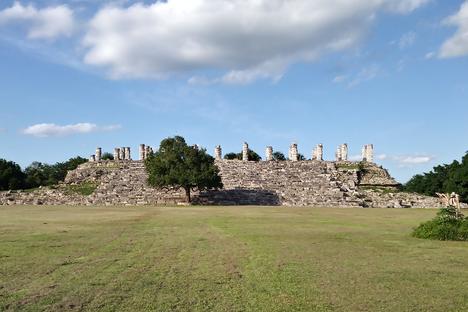 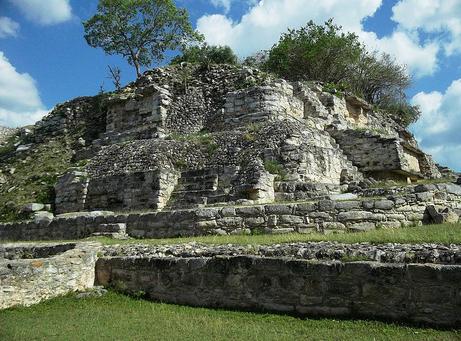 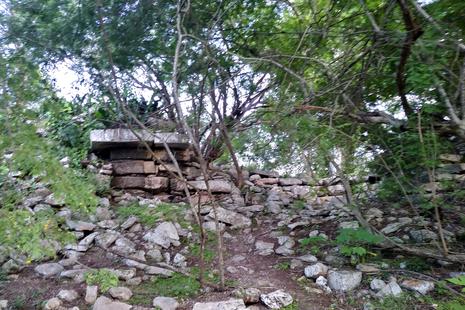