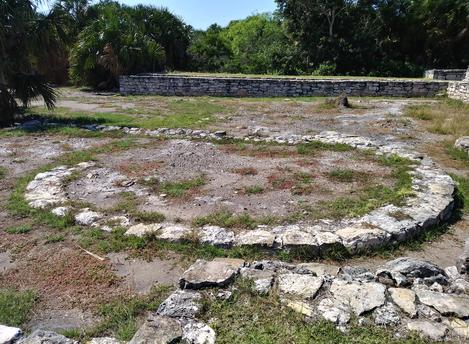 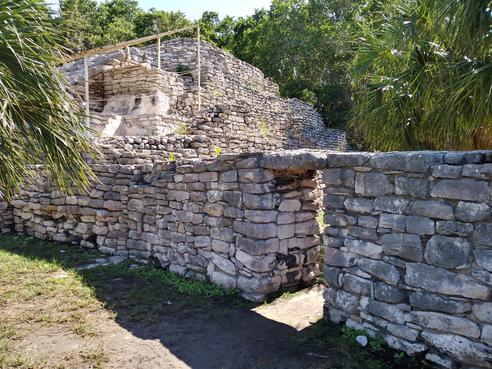 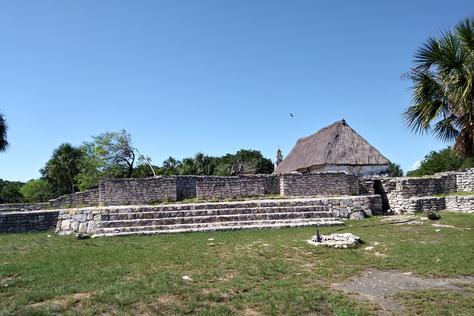 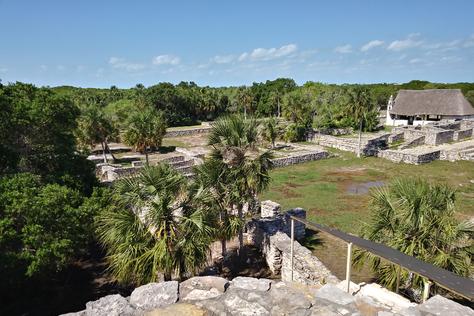 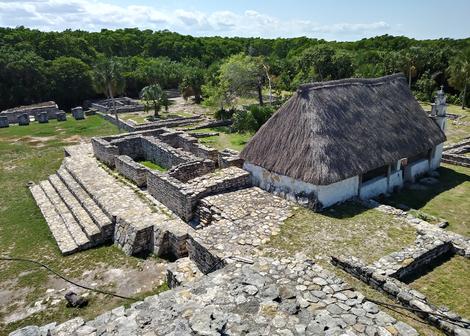 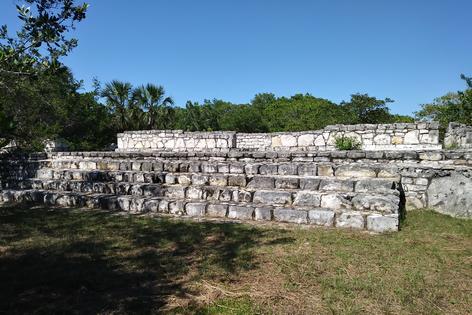 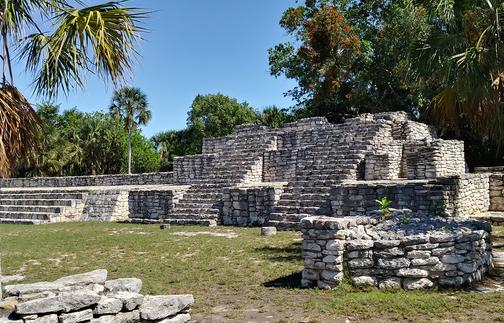 ​​​​​DESCRIPTION
Xcambo is a Mayan archaeological zone located on the North coast of the state of Yucatan. It was an important commercial port and linked up with the vast trade network that spread around, throughout  and beyond the peninsula.  The earliest structures feature Peten style architecture as is found in other well-known sites such as Izamal and Ake, and which date to the Early Classic (250-600 A.D.). The area sits on the edge of a lagoon and is part of a broad marshland. Salt flats were commercially exploited which provided an important export commodity. There are three main architectural groups that make up the site. A sacbe (raised white stone road) leads internally from one group to another. Others lead out from the core area to smaller, nearby sites.The compact site is easily visited, with most of the structures in a good state of restoration. It is located in a sparsely inhabited region, the closest town being Dzemul.

To reach Xcambo from Merida, take Highway 176 east towards Motul. At the turnoff to Baca, go north through that town and continue on the bypass north around Dzemul. The turnoff to the site is about 8 miles/13 kms beyond Dzemul. It can also be reached from Motul passing north through Telchac, then west through Dzemul.

HISTORY AND EXPLORATION
Xcambo had its beginnings in the Early Classic (250-600 A.D.). This was done possibly under the auspices of the important pilgrimage site of Izamal to establish a seaport for its expanding trade network. These early structures show an architectural influence from the Peten region of Guatemala and feature Megalithic stonework, rounded corners, and stucco masks. Later constructions feature Puuc elements.

During the Late Classic (600-900 A.D.) the political dynamics of the Yucatan were in flux. New polities and trade routes were established. By the end of the Late Classic Xcambo had lost its influence and the site was gradually abandoned. There have been no stelae or other monuments recovered to help in identifying its rulers or political associations.

Xcambo has a short history of investigation, excavation, and consolidation with the site only opened to the public in 2001.

STRUCTURES
Xcambo has three main groups that make up the site, East West and Central, all easily visited, and nicely restored. The main civic/ceremonial group is very impressive despite its small size in area, and makes up the Central Group. There are eleven structures that are spaced around a central plaza. This plaza measures172 feet/52 meters x 129 feet/39 meters.

The main pyramid, here called Structure 1, forms the north side of the plaza, and reaches a height of about 35 feet/11 meters. This structure rises up on seven tiers and most likely had a temple of perishable materials on its truncated summit. It is the tallest structure at the site. A central stairway leads down into the plaza.

The northeast corner of the plaza has an interesting stepped pyramidal structure containing two niches that flank a central stairway. The summit is flat and probably held a temple of perishable materials as well. The height of this structure is about 14 feet/4 meters. An upright stone is anchored onto the first step of the stairway. This structure, here called Structure 5, connects to a series of structures that run the length of the east side of the plaza.

The first structure seen on the east side of the main plaza is a long, two-tiered platform approximately 5 feet/1.5 meters in height that has a broad stairway for most of its 60 foot/18 meter length. The stairway is flanked by sloped panels. A small terrace fronts the second flat-topped tier. It is identified here as Structure 6. Behind this platform to the east is a small raised plaza about 20 feet/6 meters x 60 feet/18 meters.

Connected to Structure 6 is a well-proportioned, three-tiered structure with twin staircases. This structure reaches a height of about 10 feet/3 meters, and appears to have had a ceremonial nature to it. In front of each stairway is a short column. The summit has the remains of three chambers. It is identified here as Structure 7.

Adjoining Structure 7 is a three-tiered platform structure here called Structure 8. It has as its central feature a single stairway that reaches up to the third level. The summit is flat, and again may have housed a temple of perishable materials. The corners are nicely rounded on the second tier, yet the third tiered corners are squared. The north side of the structure has a single-entry chamber on the second level. A small addition seems to have been added at some point that connects Structure 7 to Structure 8, and has a small access stairway to the first level. The partial remains of a circular structure are located behind it.

Structure 9 forms the southeast corner of the plaza. It is a small, one level platform with a single stairway to the top. It has a nice curved wall on the back side. The platform has a small, squared altar in the center. It is possible to walk along the first level all the way back to Structure 5.

The second tallest structure at the site is on the south side of the central plaza, here called Structure 2. It is a seven-tiered pyramid that has a height of about 27 feet/8 meters. A grand central stairway leads down to the plaza. The interesting remains of stucco masks flank the stairway on the third level. They are currently somewhat protected by an overhang. These stucco masks have endured for around one thousand years! Pretty impressive for the conditions they exist in. A partial stairway is located on the east side of the structure. In front of the pyramid are some small structures, one of them with a steps.

A wall extends out from the west side of Structure 2 and connects to the House of the Pilasters, Structure 3. This is a most interesting structure. It has a series of pilasters that form an outer gallery. A very small doorway leads into a single chamber that at one time supported a stone roof. Against the back wall of the chamber is the remains of what appears to be a stuccoed, small altar. This structure completes the south side of the central plaza.

On the southwest side of the central plaza, and somewhat indented is a large raised plaza containing the foundations of numerous residential structures and courtyards. An interesting circular foundation is located within one of the courtyards.

A pathway separates this residential platform from Structure 4. This appears to have been a civic/administrative center. It is set on a raised platform that runs about 75 feet/25 meters along the plaza perimeter. The central stairway is flanked by sloped panels. The structure contains a main gallery with adjoining rooms. A rear chamber of the structure opens up onto a large courtyard with the remains of other structures visible. On the north side of this structure is a platform that connects to Structure 1. It has a corbeled arch corridor that currently leads to a dead end. A chapel has been constructed atop the platform and this may have altered the original architecture of the structure.

The chapel is simple in design with a thatched palapa roof. Inside is a plain altar covered by a large stone slab that may have been a stela at one time. Steps lead out from the chapel to the residential complex called here the West Group.

​The West Group is composed of numerous platforms, courtyards, pathways and plazas. It lies adjacent to the Central Group. Many of the platforms have the remains of walled rooms. Some columns are found strewn about, and one wonders how they may have been incorporated into the structures.

Several circular, above ground storage basins are built into some of the raised platforms. These were in all likelihood salt evaporation tanks, or perhaps were used as fish salting tanks, providing the site with an important export industry. The West Group then, may have had an economic purpose infused within a residential area. An interesting walk about.

​
A sacbe leads out from the Central Group to the east about 670 feet/204 meters to the East Group. This group is situated around a raised plaza containing 5 structures of significance. The two largest structures are built atop raised platforms. The northwest structure has a single, broad stairway that leads to a terrace. Sloping panels flank the stairway. A long, single chamber occupies the central portion, with 5 smaller, separate adjoining chambers.

The northeast structure has three stairways; a central stairway leading to the flat top of the second tier, while the other two flank it rising only to the platform terrace. It has a height of about 15 feet/4.5 meters.

A short sacbe that leads further to the east is flanked by two structures. A small pyramid of about13 feet/4 meters takes up the north end, and a raised platform is on the south end. Other smaller platforms run off to the south and west. The aforementioned sacbe stretches out about 338 feet/103 meters to a cluster of three structures. The largest of the three forms the east end of a small plaza. It rises up on a platform with a single stairway facing west across the plaza, back to the East Group. It has the remains of four chambers atop the platform base. All in all, this is a most pleasing site. 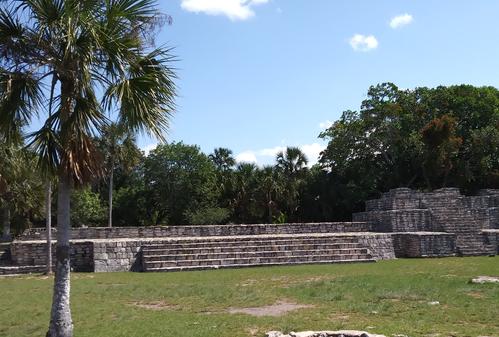 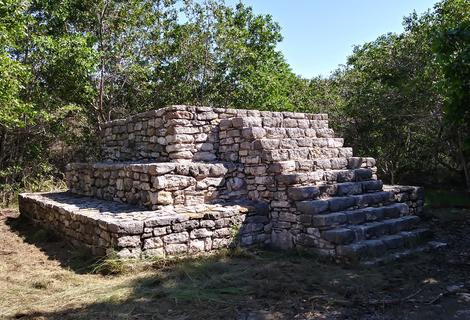 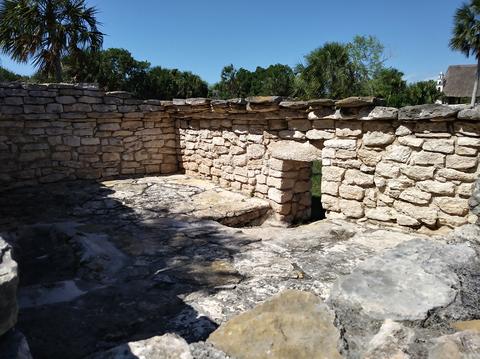 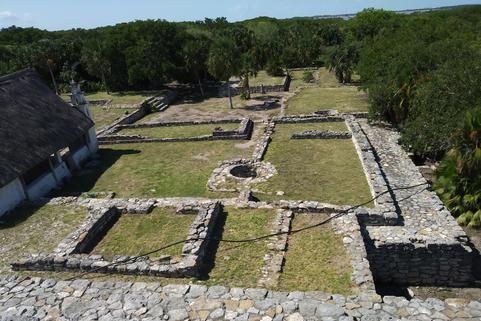 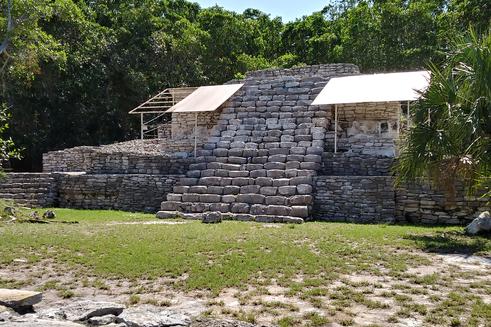 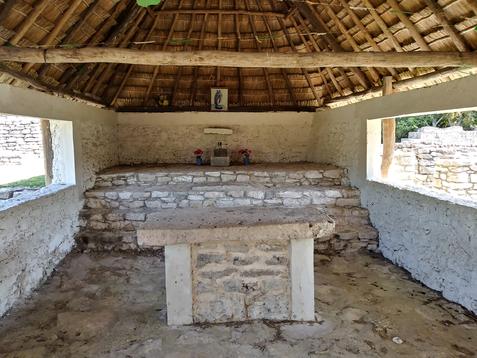 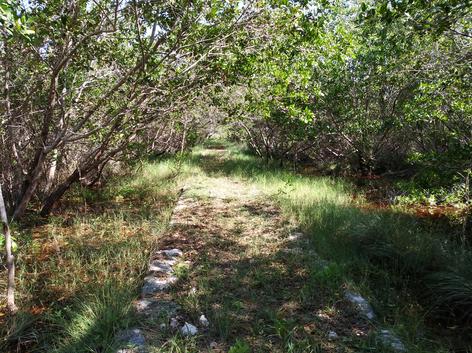 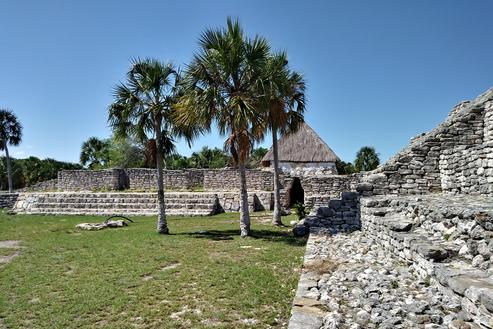 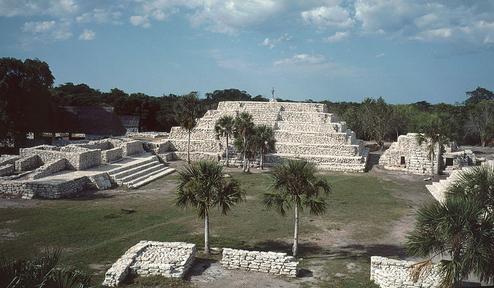 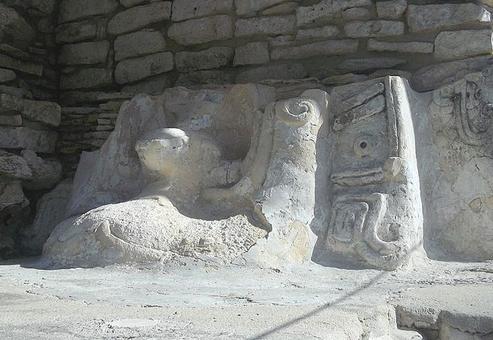 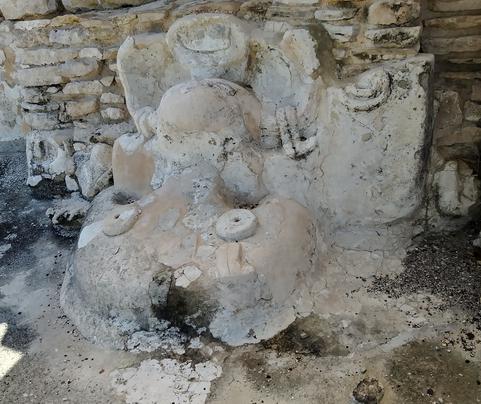 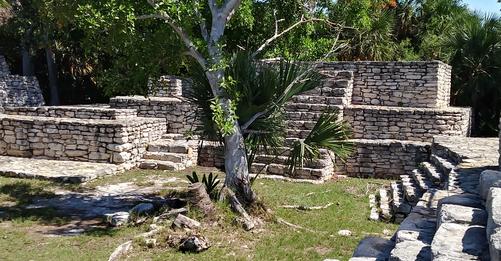 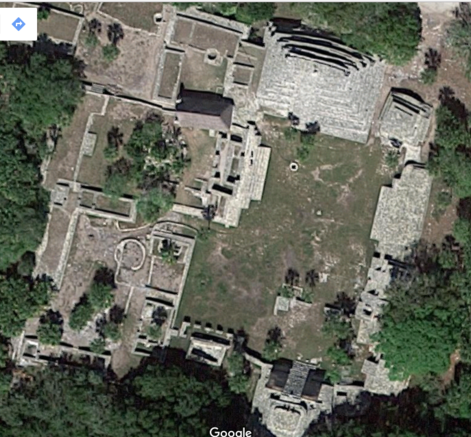 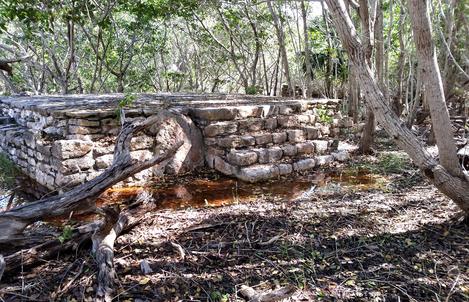 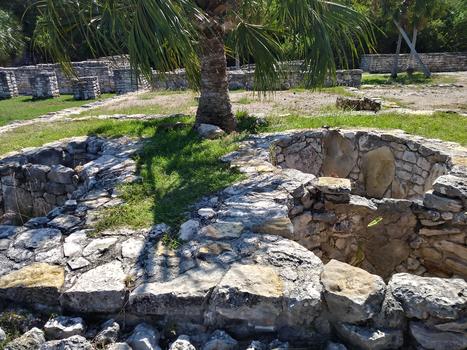 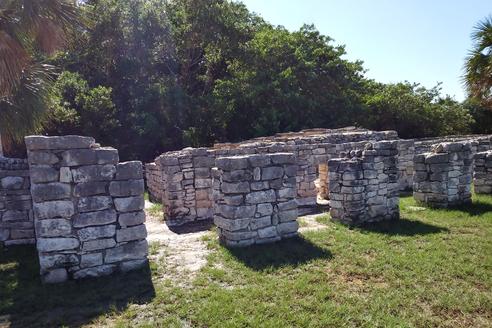 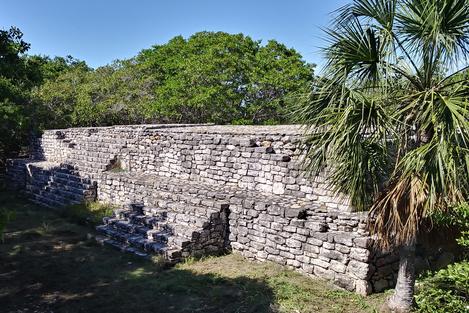