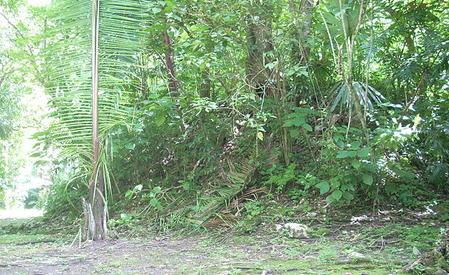 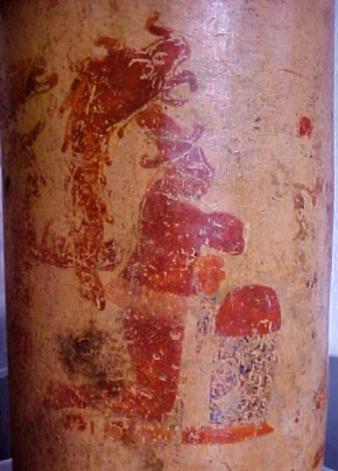 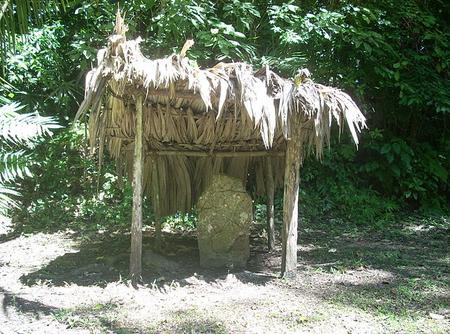 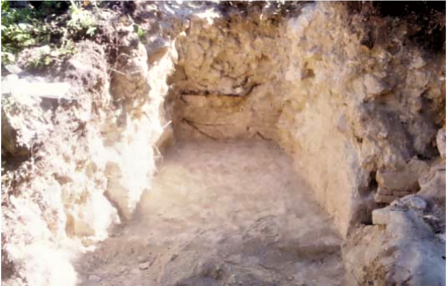 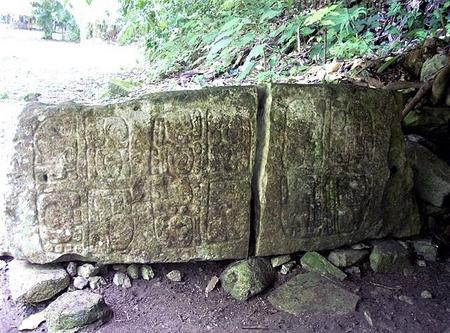 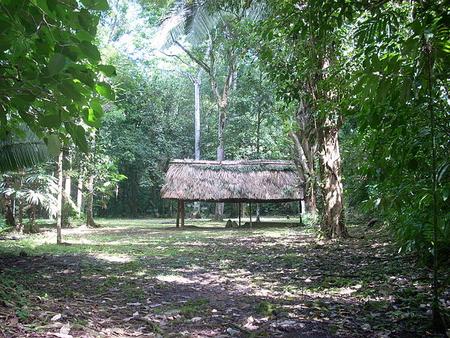 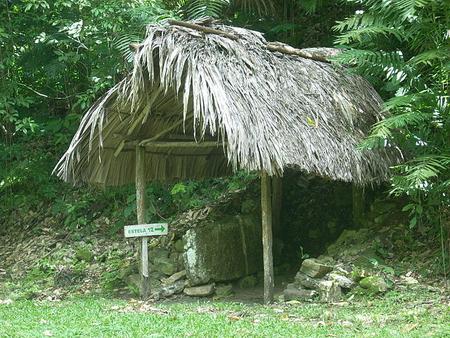 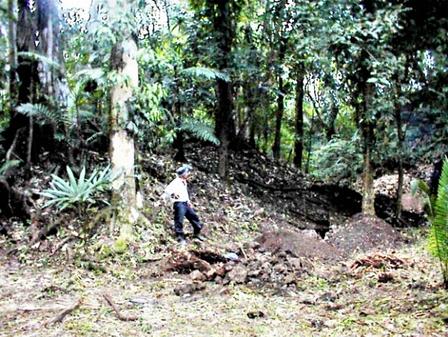 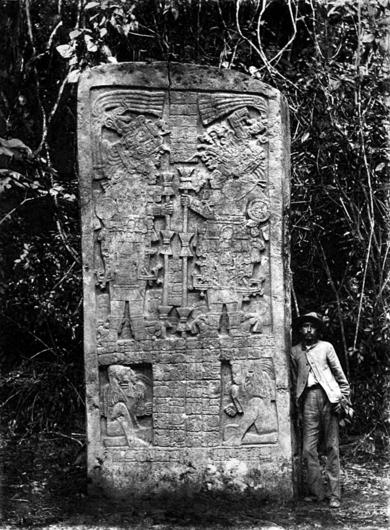 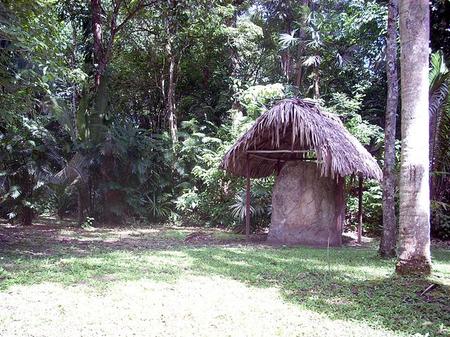 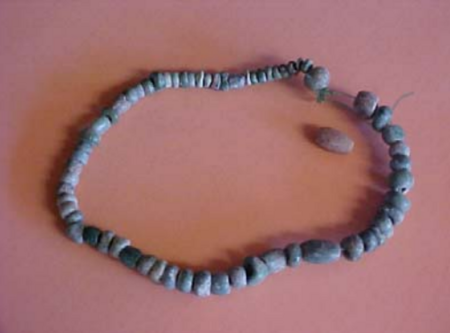 ​IXKUN, Peten Department, Guatemala
DESCRIPTION
Ixkun is a notable archaeological zone located in the municipality of Dolores, and situated within the Ixkun Valley, part of the upper Mopan River Valley basin. It was ideally positioned to take advantage of the important trade routes that flow from the interior of the Peten out to both the Caribbean Sea to the east, and the mighty Pasion/Usumacinta River system to the west.

The site is set within the foothills of the Northwestern Maya Mountains which is composed of numerous hills, streams, rivers, plateaus, and narrow valleys. The structures were built on and about the small hills that dot the Ixkun Valley, at an altitude of about 1,250 ft/384.5 meters. A stream runs near the ceremonial center of the site. The main groups are interconnected by two sacbeob (raised, white stone roads) that run on a north/south axis. It does not have much in the way of excavated architecture, but is representative of an area not well reported on.

The archaeological zone encompasses a large area with the smaller civic/ceremonial center containing pyramids, temples, a ballcourt, vaulted palaces, and an E-Group assemblage.

Ixkun has a long occupational history spanning from the Pre-Classic (750 BC-250 CE) into the Post Classic (1150-1525 CE), nearly 1,600 years. It was one of a cluster of five small polities/kingdoms that were located within the Upper Mopan River basin.

The archaeological zone is located about 4 miles/ 6.5 km north of the town of Dolores, and 2.4 miles/4 km west of the Mopan River. Dolores sits alongside the CA13 and is about 48 miles/78 km southeast of Flores, which can be reached by plane or car from Guatemala City or Belize.

HISTORY AND EXPLORATION
Ixkun shows ceramic evidence of occupation from the Middle Pre-Classic (750-350 BC), around some caves located within the site. Monumental architecture begins in the Late Pre-Classic (350 BC-250 CE.), with further constructions in the Early Classic (250-600 CE). The majority of construction activity takes place in the Late Classic (600-850 CE), with additional constructions into the Terminal Classic (850-1150 CE). The site was occupied with a reduced population into the Post Classic.

There are five polities that make up a cluster of small kingdoms in the Upper Mopan River basin, all within a 9.75 mile/15.5 km radius of each other. They each controlled numerous smaller settlements spread out through a series of valleys traversed by tributaries of the Mopan. These other polities are: Ixtonton to the southeast, Curucuitz to the southwest, and Ix Kol to the south, with Sacul a bit further to the East. Ixkun is the northern most polity. These sites were at times allied with, and at times in conflict with, each other. The regional kingdom of Caracol is located about 22 miles/35 km to the northeast, and probably had some influence over the entire area.

While numerous carved stelae have been recovered in Ixkun, erosion has unfortunately, obliterated much of the information. What has been recovered describes some of the events from the 8th century.

Stela 2 records two conflicts, and names two of Ixkun’s rulers. The first event occurred on 9.17.9.0.13, 3 Ben 6 Kayab-December 21, 779 CE, on the Winter Solstice. This event was a battle against the kingdom of Sacul where Ixkun is apparently the victor. Sacul at the time was allied with the site of Ucanal/Kan Witz located 18.5 miles/30 km away. The second event marked a war against Ucanal/Kan Witz on 9.17.9.7.14, I Ix 2 Xul-May 10, 780 CE, and again Ixkun was victorious. These wars appear to have been undertaken by an Ixkun ruler named Eight Skull.

Eight Skull’s successor, Rabbit God K, received a king of Sacul, Ch’iyel, in an event that is commemorated on Stela 1 in which they face each other as equals standing over bound prisoners. This is dated to a Katun Ending ritual of self-sacrifice that took place on 9.18.0.0.0, 11 Ahaw 18 Mak-October 11, 790 CE. The text mentions an alliance between the two against another polity, perhaps Ixtonton. It also mentions the mother of Rabbit God K as Lady Ik from an unknown site named Akbal. Stela 1 is thought to be among the tallest stelae within the Peten reaching a height of 13.5 feet/4.13 meters. A stylistically similar stela, Stela 2, appears in Sacul describing the same event.

An interesting glyphic inscription is found in Naj Tunich Cave located about 22 miles/37 km to the southeast of Ixkun. The glyphs describe a fire ritual between a king of Ixkun and a king of the major center of Caracol, Tum Yohl K’unich. While no date is mentioned, this Caracol King ruled c.793 CE. The text does not say where the ritual took place, but would seem to indicate a relationship between the two sites. It also mentions a lord from the great Kaan Kingdom of Calakmul, 110 miles/176.5 km away, which implies an even larger sphere of interactions throughout the Southern Lowlands.

Stela 5 records a period ending date of 9.18.10.0.0, 10 Ahau 8 Sak-August 19, 800 CE. This is the latest recorded date at Ixkun. Sometime after 800 CE the site experienced a decline in population, and construction activities were interrupted with structures left unfinished. This may be attributed to the ascendancy of Ixtonton which now becomes the dominant polity in the area. Population and building activity pick up again, however, in the Terminal Classic, possibly involving a different ethnic group, before the slow march to oblivion in the Post Classic.

Ixkun was first reported on by the governor of the Peten, Colonel Modesto Mendez, in 1852. He was accompanied by an artist named Eusebio Lara, who published his drawings the following year in a German publication. The next exploration was  undertaken by Alfred Maudslay in 1887, who cleared the site, and produced the first site plan and descriptions. There followed Sylvanus Morley and Herbert Spinden in 1914, who took photos and notes on the stelae. Detailed investigations were carried out by Ian Graham and Eric von Euw in the 1970’s. Since 1985 archaeological work has been undertaken by the Archaeological Atlas of Guatemala, a government affiliated entity.

STRUCTURES
Ixkun has over 51 groups, mostly of a residential nature. The structurers are mostly unexcavated mounds. The core area of the site consists of 5 main groups that are situated on a North/South axis, with a mixed orientation between 0-10 degrees East of North.  The most important group is the Central Group which is made up of three plazas:  Plaza A, Plaza B and Plaza C.

Plaza A is the main ceremonial center. The most important structures are Structures 3 and 6 which combine to make up an “E Complex” that was designed to observe the equinox and solstices. What is interesting to note is that this complex was built at the beginning of the Late Classic, while this was mostly a Pre-Classic type of construction.

Structure 3, also known as the West Pyramid, is found on the west side of the plaza, and rises up on 8 staggered levels. It is the tallest structure at the site reaching a height of 49 feet/15 meters. It has a base of about 140 feet/43 meters by 126 feet/38.5 meters. A central stairway of about 21 feet/6.5 meters wide, leads up to the remains of a summit temple. In front of this structure is the impressive Stele1. The initial construction phase dates back to the Late Pre-Classic.

Structure 6 is on the east side of the plaza and is an elongated platform base of about 248 feet/76 meters in length, and 150 feet/46 meters wide. The base rises about 10 feet/3 meters in height and houses 3 structures, the central structure being the largest. This structure is set at the back of the platform base and is ascended by a central stairway to a three chambered temple, and possessed a roof of perishable material. Stelae 2 and 3 are set in front of this structure, with Stela 3 having a partnered altar, Altar 3, with a glyphic inscription now mostly eroded.

Structure 5 is located on the north side of the plaza and consists of a rectangular platform that housed a small temple. It has a height of nearly 14 feet/4.5 meters. In front of this structure is a plain stela, Stela 10.

Structure 1 is located on the south side of the plaza. This structure is a three-tiered platform reaching a height of 16 feet/5 meters, and has stairways on both the north and south sides. A burial, Burial 60, was located beneath the floor of the ruined temple. The burial consisted of an unidentified individual with various grave goods such as a greenstone necklace, tripod bowl, a tripod plate, and a painted, cylindrical vase (see photos). The south side of the structure faces onto Plaza B.

Plaza C is the largest plaza at the site. Long platforms occupy the east (Structure 13) and south (Structure 14) sides of the plaza and most likely supported structures of a perishable nature. Stela 4 is located in front of Structure 13. The main construction is the Acropolis on the west side of the plaza.

The Acropolis is set upon a modified hill. It has a broad stairway that rises up 33 feet/10 meters to two unexcavated structures, Structures 21 and 22. A single passageway leads through the structures then down steps into the main patio, Patio 1, that is ringed by four structures. The principal structure of this patio is Structure 20 which rises to a height of 17 feet/ 5.2 meters. A burial was located within the structure.

A second patio, Patio 2, is accessed from the west side of Patio 1, and is elevated about 12 feet/3.6 meters above it. This patio exhibits constructions that were never completed. Behind the acropolis at a lower level are several small residential groups.

Outside of the core area are two complexes, The North Group and the South Group, that are connected to the core area by sacbeob/causeways.

The South Group is reached by a sacbe that runs about 700 feet/215 meters, and is about 59 feet/18 meters in width. The sacbe is raised about 4.25 feet/1.3 meters. Low walls line the edges of the sacbe. At the terminus of the sacbe is a platform which incorporated Stelae 5 and 6. Stela 5 was originally found intact, but has since met an unfortunate end as it was broken up by looters. The pieces that remained were taken to Dolores for safekeeping, but some of them were fated to end up as road construction fill. Stela 6 is a fragmented monument. There is a poorly preserved round altar associated with Stela 6. A small cache was discovered near the midpoint of the sacbe.

The South Group itself is located on the top of a natural elevation of about 134 feet/41 meters in height. There are 5 structures, Structures 27-31, that are set about a patio, with some of the sub-structures dating to the Pre-Classic. In front of Structure 29 is Stela 7 and its associated altar. Three caves are associated with this hilltop group. More than 30 vessels have been recovered from the caves in addition to copal, coal, wood, and strips of burnt wood which have been dated to c200 BC.

To the north of the core area a sacbe connects to the North Group, also known as Group 50. The sacbe runs 939 feet/288 meters and has a width of 46 feet/15 meters. It is raised about 4.75 feet/1.45 meters from the valley floor. This group is set upon a hill much like the South Group, and houses 4 structures, with two of the structures being at the causeway level.

There are over 35 identified residential compounds, and civic groups scattered throughout the site. Two civic groups of note are located on both the east and west sides of the North sacbe across from one another. These are Structures 37 and 38. Both are large platforms that house from two to three structures. 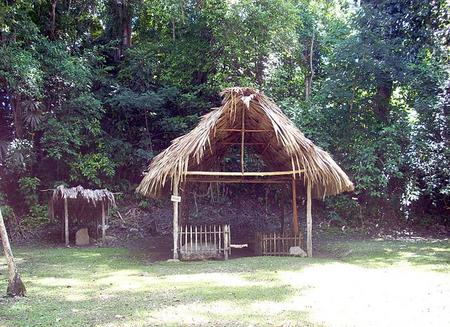 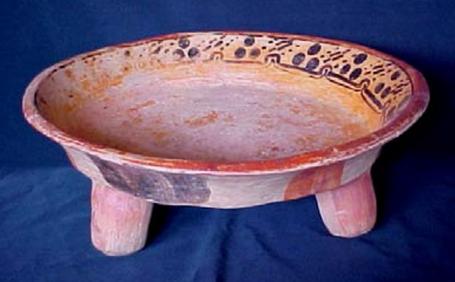 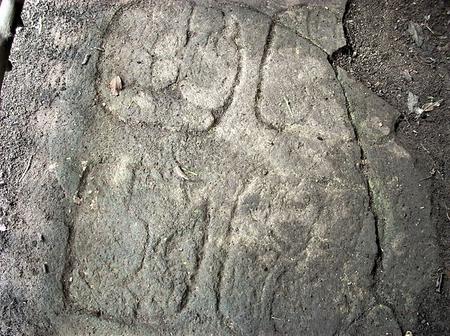 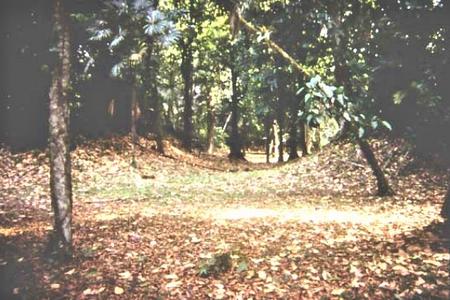 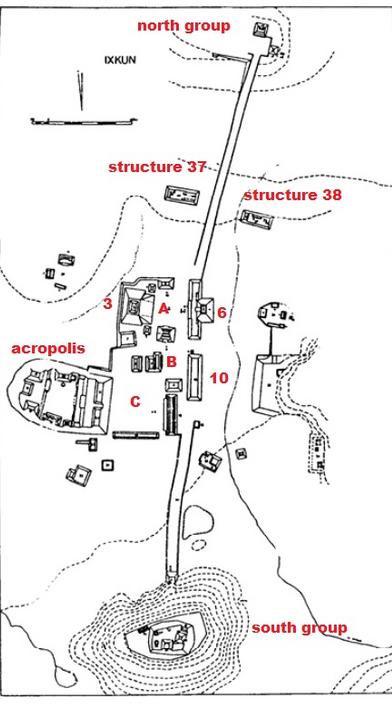 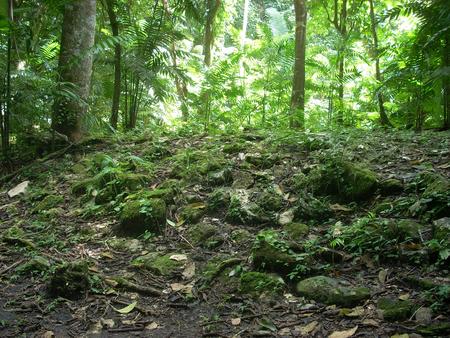 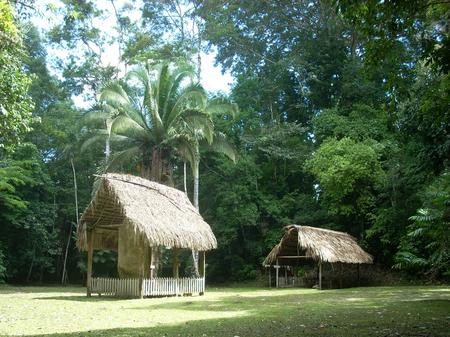 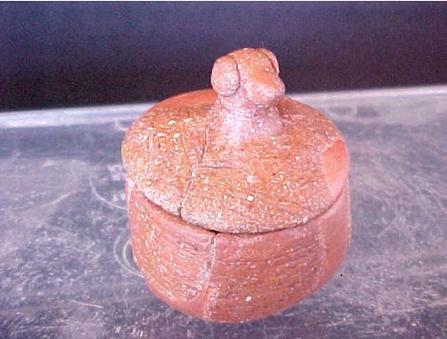 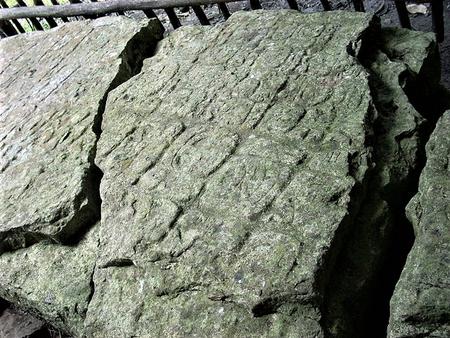 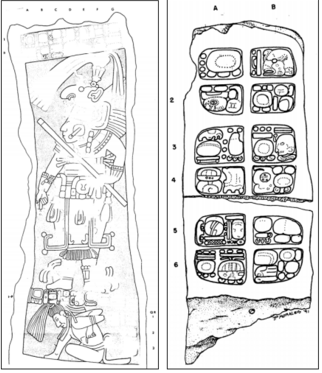 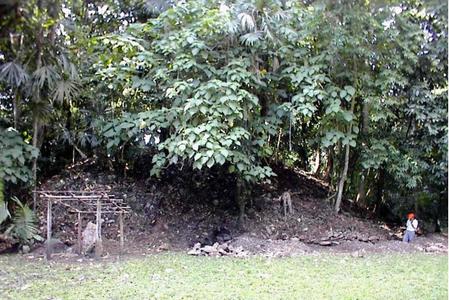 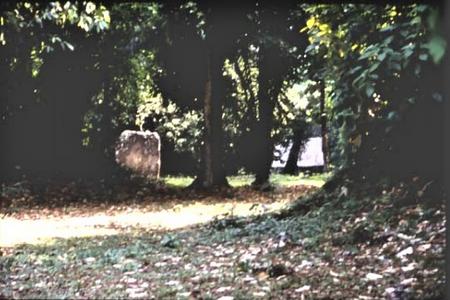 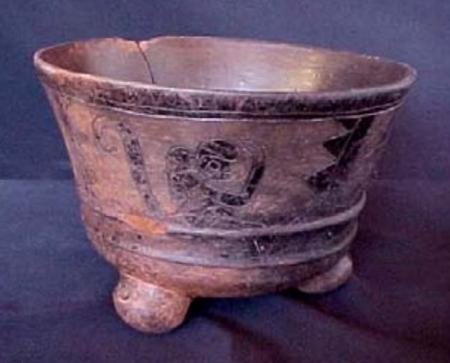