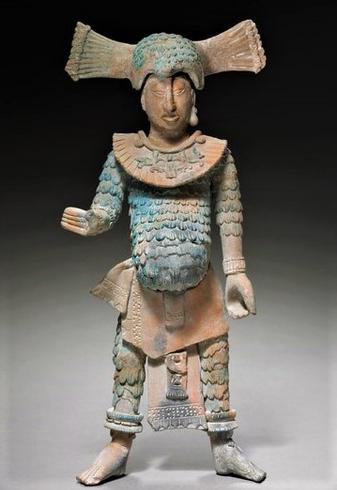 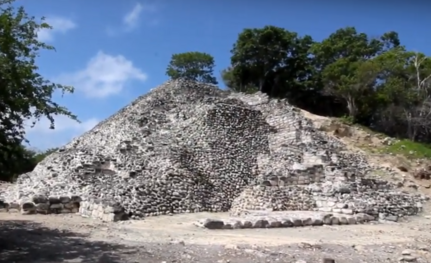 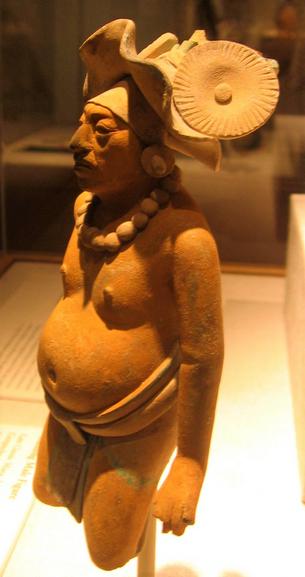 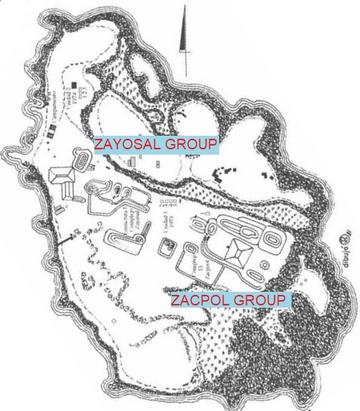 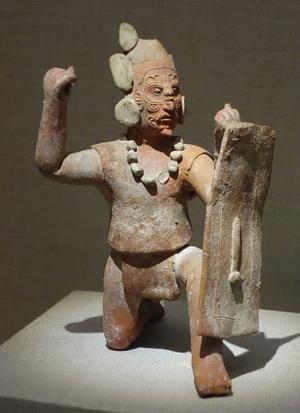 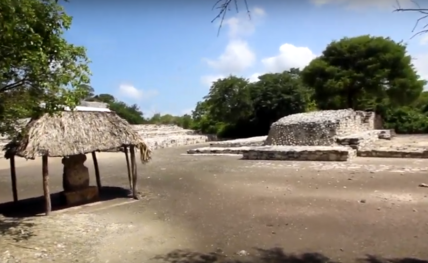 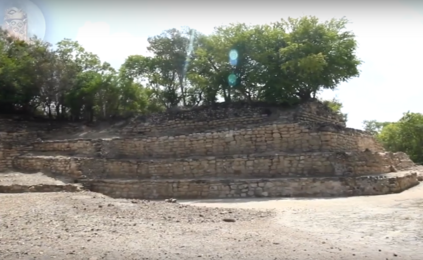 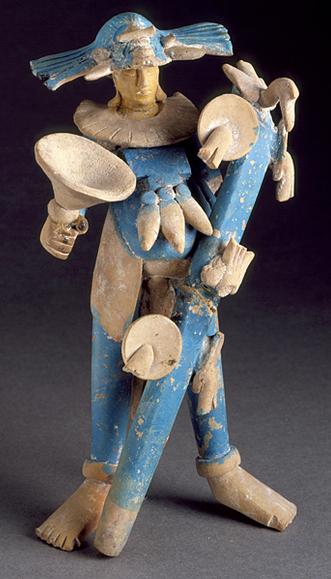 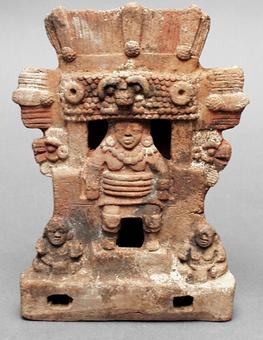 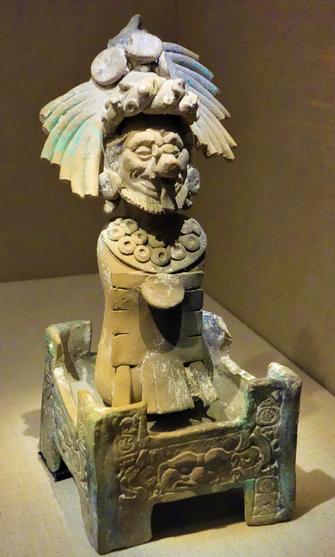 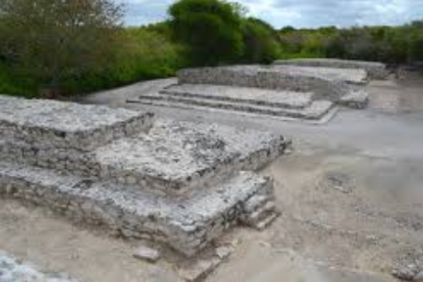 DESCRIPTION
Jaina, Temple on the Water, is a compact archaeological zone located on an island off the western coast of the Yucatan Peninsula. It is 25 miles/42 kms north of the state capital Campeche, and is located within the Parque Natural Petenes. The island itself was artificially created to facilitate commerce along the Gulf Coast. It was at one time considered to be a necropolis for the Maya elite being world- renowned for the realistic and gracefully executed figurines found with those interred there. Current interpretations however, reveal the site to have been an important Gulf Coast commercial center.

The site has historically been accessed by boat from Campeche. There is however, a new unpaved road that has been constructed that links Jaina to the town of Hecelchakan located along the Merida-Campeche Highway 180. It is 22 miles/37 kms along the road from there to the ruins. When more information becomes available concerning this route it will be reported here.

HOURS:  The site is accessed by guided tour only, or with special permission from the INAH office in Campeche. With the new road built it may now be directly open to the public, though inquire beforehand.
ENTRANCE FEE: Check with tourist agencies or INAH in Campeche
GUIDES: Guides available through tourist agencies in Campeche
SERVICES: None
ON-SITE MUSEUM: No
ACCOMODATIONS: Lodging and food can be found in Campeche
GPS: 20d 12’ 25” N, 90d 28’ 57” W
MISC:

HISTORY AND EXPLORATIONS
Ceramic evidence points to Jaina being settled in the latter part of the Late Pre-Classic (300 B.C.-200 A.D.). Most of its surviving masonry structures date from its heyday, the Late Classic (600-900 A.D.), when the site became one of the most important centers on the west coast of the peninsula. The site was occupied into the Post Classic (1000-1450 A.D.), and began its decline around 1250 A.D.

There have been no stelae or other texts located at the site to help in identifying its rulers or political/economic relationships with other sites. The site was important enough though to have its own emblem glyph which has been recorded in various texts found at Xcalumkin. This would appear to indicate a close relationship between the two sites that are located 31 miles/49 kms apart. Some of the structures show Puuc architectural influence. There are several stone sculptures in front of the INAH kiosk, though they do not appear to provide any historical information.

The fabulous figurines unearthed at Jaina are similar to those found at other Mayan sites along the Usumacinta River delta region, as well as at the site of Comalcalco. Comalcalco has been shown to have the remains of extensive clay figurine workshops.

The site has been known since Colonial times, and was pillaged for its finished stone to use in the construction of homes and roads on the mainland. This sad condition has afflicted many ancient sites. It was later plundered for the stunning ceramic figures found there.

The ruins were first reported on by Desiree Charney in the late nineteenth century. More recent explorations, excavations, and restorations have been undertaken by Roman Pina Chan 1948/1964; William Folan and Luis Alverez 1989; and Antonio Benevidas C. 2007/2012.

STRUCTURES
There are reported to be about forty structures throughout the site, with the main structures forming into two complexes, one containing a ball court group. They are on a general northwest/southeast axis. Some of the structures have been excavated showing some nice restoration efforts.

The Zayosal Group is located on the west side of the island and contains six structures set about a main plaza. Most have been partially excavated and restored.

The main structure, Structure 2, is on the west side of the main plaza. This structure is of a large, elongated pyramidal design that runs 188 feet/57 meters in length, and rises up multiple tiers. A stairway on the north side of the structure has been partially uncovered. The east side has been completely excavated and restored. The upper tier has what appears to be the remains of one or more masonry chambers. A small stairway descends from the structure onto the north side of a sub-plaza. The remainder of the structure is overgrown with vegetation.

A platform is on the east side of Structure 2 within the main plaza. It has at least one visible stairway.

Adjoining the southwest corner of Structure 2 is Structure 1. This structure is an “L” shaped platform housing two separate structures, here called Structures A and B. There is a wide east facing stairway that fronts onto the small sub-plaza from Structure A. The platform portion containing Structure A consists of four tiers, the backside of which has not been excavated. The tiers are unevenly spaced and do not run the full length of the structure which may indicate it once consisted of  a series of chambers. The upper part of the structure has yet to be excavated. Structure B is of a truncated pyramidal design also of four tiers. The east side has been excavated and restored. Across the sub-plaza from Structure 1 is Structure 4.

Structure 4 is a nicely restored three-tiered, truncated pyramid. It has a west facing central stairway onto the sub-plaza with a base that measures 96.5 feet/29.5 meters by 88 feet/27 meters. The north side of the structure runs along the main plaza. In front of the east side of the structure is a small, square platform that has the remains of masonry walls. Beyond that is Structure 6.

Structure 6 is a rectangular platform that rises up on three tiers. It may have held a masonry structure along with others of a perishable material. To the east of this structure is Structure 5, the Ball Court.

The Ball Court is of a rather modest design with the two associated structures exhibiting no vaulted or flat-roofed masonry chambers. It is oriented about 7 degrees east of north.

The Zacpol Group is located in the center of the island. This group is more organized, and is centered around a large pyramid. It contains maybe a dozen structures set upon a number of raised platforms. The pyramid has been excavated and cleared of vegetation though it appears that the other structures are still covered in undergrowth.

There are a number of smaller groups that are located across the island. A west group shows several structural foundations. Two groups of an apparent residential nature appear to the south and west of the Zacpol Group.

Little has been published regarding the excavation and consolidation of the structures at Jaina. Most accounts focus on the fabulous ceramic figurines that have been unearthed across the island. Once further reports come to light, additional information will be reported on here.

THE JAINA FIGURINES
While the structures at Jaina are impressive enough, it is the discovery of the amazingly life-like figurines that has captured world attention including that of archaeologists, anthropologists and art aficionados alike. These figurines were placed as grave goods, though their exact purpose is unclear. It is thought that there are over 20,000 burials with about 1,000 so far excavated The burials in general placed men to the north, females to the south, and children to the west. It would appear that the male burials contained more figurines than female burials.

The figurines capture the grace, beauty and essence of Maya nobility. From rulers to warriors, to ballplayers, each figurine is delicately formed with characteristics that seem to portray expressions of individuality and social class.  They also depict a number of the Maya deities.

The figurines are generally between 10-25 inches/25-65 cm in height, and some with removable headdresses and articulated limbs. Many of these acted as whistles. Some of the whistles had additional holes that could be “played” producing different tones, and could have been used in different social and ritual settings. Having had the opportunity to “play” one of these whistles, it is deeply intriguing to try to imagine what the original music would have sounded like.

The figurines can be classified into three general groups. The most artistically refined pieces come from the earliest dated group, c.500 A.D. These were completely hand-made and show the most individual traits. The second group appears later, c.800 A.D., and were produced mostly from molds. The molded figurine then had individual ornamentations applied by hand. Both groups can exhibit traces of red, white and blue paint. The last group, c.1000 A.D., were all molded, featuring mostly female subjects, and had a plain whitewash finish. The cultural heritage preserved by these figurines have been indispensable to researchers in their studies of Mayan daily life.
Updated January 2020 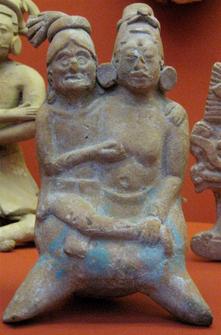 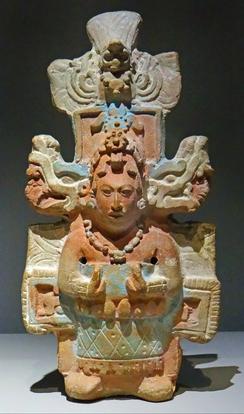 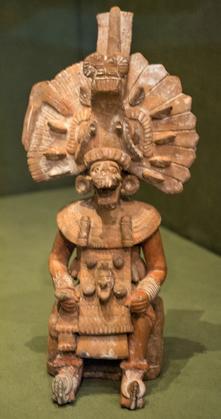