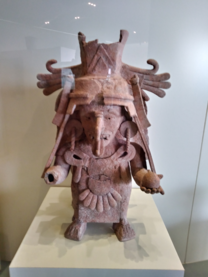 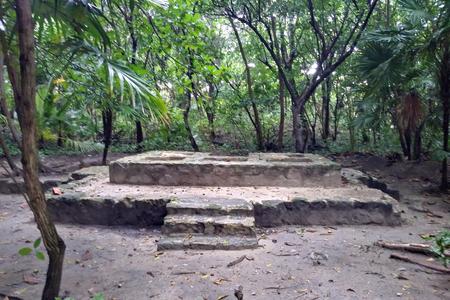 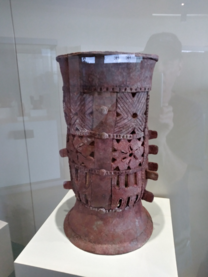 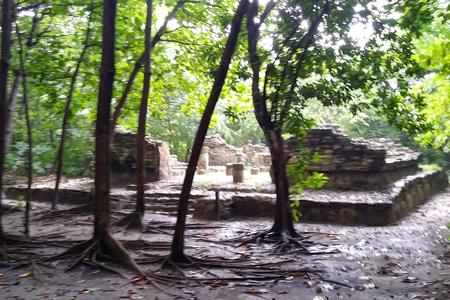 DESCRIPTION
San Miguelito is a Post Classic site (1100-1450 A.D.) located on Cancun Island. It is the northern extension of the larger site of El Rey separated by Avenida Kukulkan which runs the length of Cancun Island. It was part of the polity of Ekab (Black Earth) which ruled over the northeastern portion of the Yucatan at the time of the Spanish invasion. The original name of the site is unknown. The modern name derives from a coconut palm plantation that once occupied the area.

San Miguelito was involved in an extensive trade network that extended from Central America around the peninsula to Campeche on the Gulf Coast and inland. Export items included dried fish, salt, honey, and stingray spines which were an important item in bloodletting ceremonies. Imported items included obsidian, quartz, flint, jadeite, basalt grinding stones and copper tweezers, as well as providing a conduit for evolving world views.

San Miguelito was only opened to the public in 2012. On the grounds of the site is an excellent museum, Museo Maya, with artifacts from around the Yucatan Peninsula and neighboring states. It is situated in a small reserve that features an environment once typical of the island but which is now rapidly disappearing.

San Miguelito was split off from El Rey in the 1970’s. It is presumed that many small structures were lost during the construction of hotels, a golf course, and Avenida Kukulkan. It is located at mile marker 16.5 on Avenida Kukulkan, at the Omni Hotel entrance. The site and museum have their own free parking area.

HISTORY AND EXPLORATION
Ceramic evidence shows San Miguelito/El Rey was inhabited from the Early Classic (250-600 A.D.). It experienced a slow decline through the Late Classic (600-900 A.D.), then came into its own as an important trade center in the Post Classic period. It displays an architectural style known as East Coast, which is similar to its better known cousin Tulum to the South.

The site was protected on the east side by a huge sand barrier, and bounded on the west by Lake Nichupte. The lake offered a protective shelter for trade canoes, and was a source of seafood for its inhabitants. Within the lake is a small Late Pre-Classic (300 B.C-250 A.D.) site, Coxolna, situated on an island.

After the Spanish invasion in the 1500’s, the trade routes were extinguished, and the populations decimated by introduced diseases for which the Maya had no immunity to. The site was soon abandoned.

Modern explorations began in the 1800’s by the likes of John Lloyd Stephens and Frederick Catherwood, Alice and Agustus Le Plongeon, and William Holmes among others. The twentieth century brought Thomas Gann and Samuel Lothrop who contributed the first descriptions and site maps. INAH began restorations and consolidations in the 1970’s which continue to this day.

STRUCTURES
There are four main groups of structures, along with several minor platforms, associated with San Miguelito. These are all easily accessed along a pathway the winds its way through the site.

The first group encountered is the North Group. This group consists of five raised platforms that once held structures of a perishable nature, and is considered a residential zone. They are set close together with two of the platforms adjoining each other, and were accessed by small stairways. On two of the platforms appear a small circular enclosure which may have been related to food preparation or storage. More than twenty graves have been located buried beneath the platform floors.

The Chaak Palace Group contains several structures oriented around a plaza. The Chaak Palace is on the north side of the plaza, and gives this group its name. The palace, along with the pyramid, are the most impressive structures at the site. The palace platform is in the shape of a squared “C” with the middle of the “C” an open entrance, a very common configuration in Mayan design. The palace itself runs the entire length of the platform, about 100 feet/30 meters. The remaining walls are nicely preserved. The open front of the structure faces South. A series of columns once held a flat wooden roof, typical of the East Coast Style. There are at least twelve columns, some of which still retain some of their original stucco coating, now several hundred years old.

The main stairway entrance contains numerous decorative stone blocks which portray the image of Chaak, the Rain God, as well as some relating to Venus and other elements from the earth such as flowers. Unfortunately, this is a very wet environment and mold has obscured most of the decorations.

Across from the palace is a medium sized platform with the remains of a columned entrance that faced back to the palace. On the southwest side of the plaza is a ruined structure with only a portion of the walls visible.

The next group encountered is known as the Dragon Complex, so named for 2 small stone sculptures that were discovered during construction of the avenue. This complex has ten small structures associated with it. These are a mix of palaces, altars, shrines and residential dwellings. Some of these have yet to be excavated or restored. The most relevant is a structure on a shared platform that still has traces of a mural painting on one of its remaining walls. The mural is marine oriented with fish, turtles and other sea creatures. Across from this is a platform with a raised central section which may have been a temple.

The South Group is made up of six structures which include house platforms, altars, and a nice palace which form around a plaza. The palace is the most notable structure here, and is on the west side of the plaza. It has an east facing, columned entryway with a small stairway in front. There is a small altar against the west wall. Interior columns once held a flat wooden beam roof. Two chultuns (shallow water catchments) have been located at the rear of the structure.

On the southeast side of the palace is a medium sized platform which once supported a structure of perishable materials. Other small platforms are grouped about the plaza.

Immediately to the south of the palace structures is the main pyramid. This is the tallest structure at the site, rising up maybe 15 feet/4 meters. The one stairway faces to the south towards El Rey, and the pyramid itself lies along the causeway that once linked the two together.

A small temple crowns the pyramid summit, and was built in the East Coast Style with a columned entryway. Investigations have revealed three distinct building phases, a common practice of the Maya. 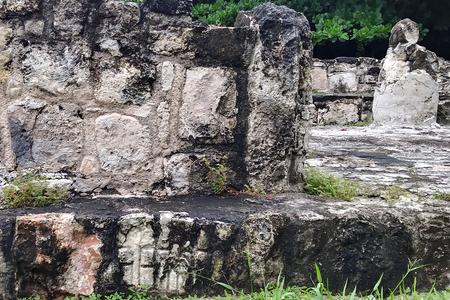 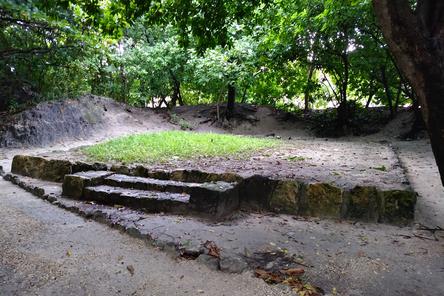 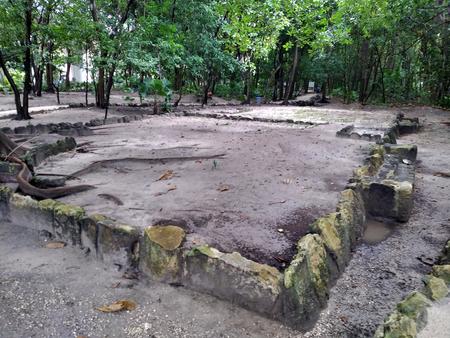 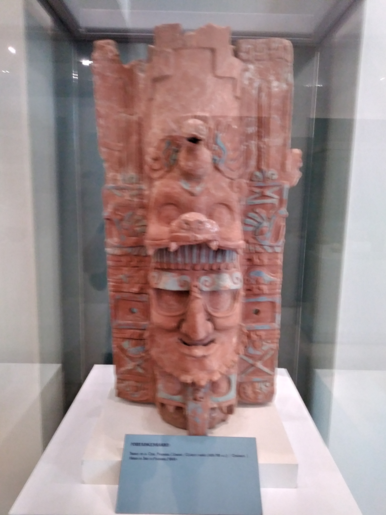 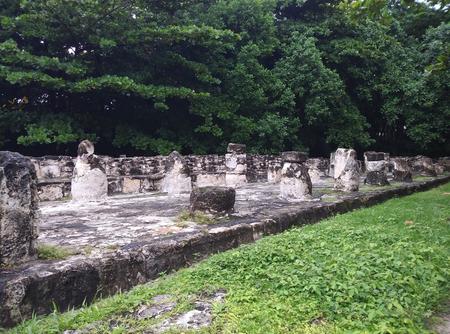 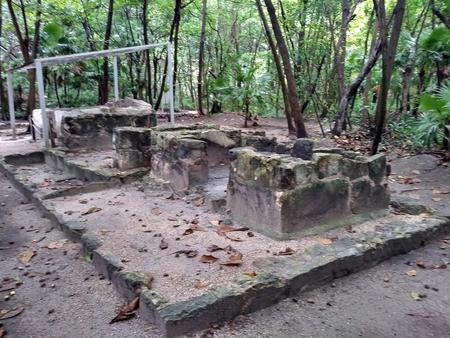 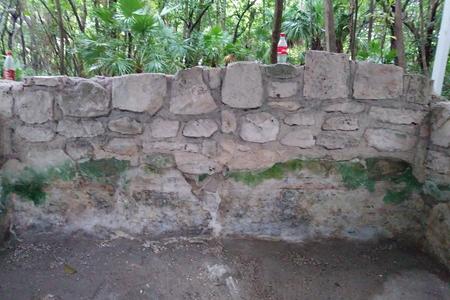 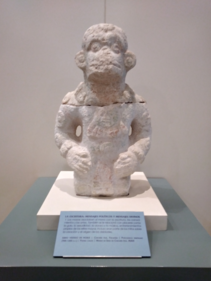 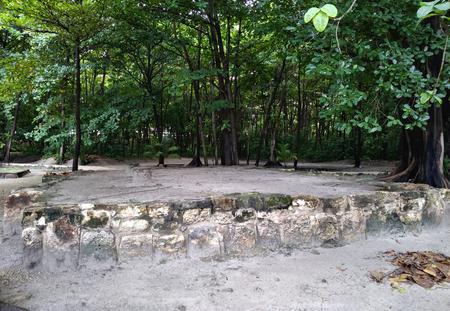 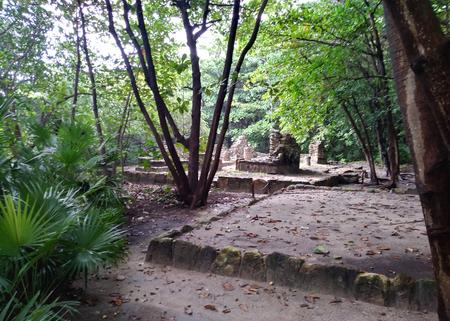 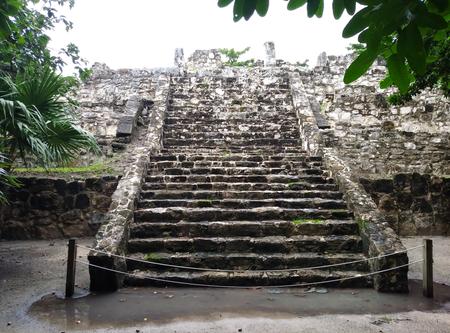 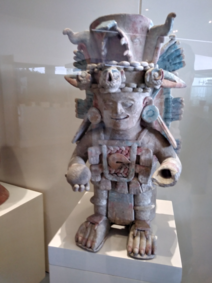 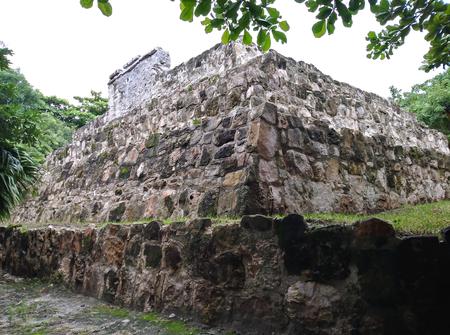 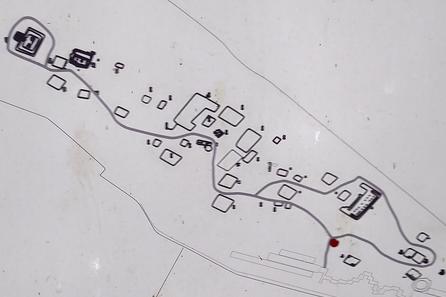 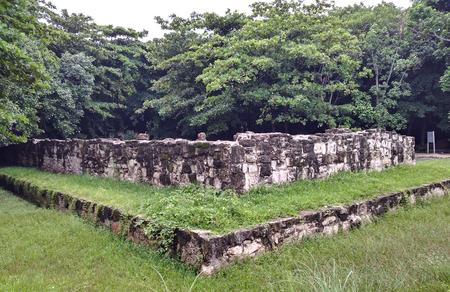