DESCRIPTION
Yaxchilan (green stones) is one of the best known Classic Period (400-900 A.D.) archaeological zones. It is located within a rainforest on the Usumacinta River that forms a part of the border between Mexico and Guatemala. It is situated within a horseshoe  bend of the river which afforded it a protective status, and allowed it to control the  trade between the Peten and the Gulf of Mexico.

Its ancient name has now been deciphered as Pa’ Chan (Divided Sky). This large site contains dozens of structures, many of which have intricately carved lintels. The high level of craftsmanship is absolutely stunning in their execution and design. The historical information derived from them have helped to explain the history of the rulers of Yaxchilan and their interactions with other sites within the region.These lintels are best observed and photographed from a prone position as the inscriptions have been carved on their underside. There are also an abundant number of impressive stelae (carved stone markers) found throughout the site.

The site is located in the state of Chiapas. It is reached by traveling from Palenque southeast on the main highway about 140 miles/224 kms to the border town of Frontera Corozal. Lodging, guides and transportation down the Usumacinta River to the site can be arranged in this town. Travel further downstream to the equally jungle shrouded Maya site of Piedras Negras can also be arranged from here. Make sure you take your passport as Piedras Negras is in Guatemala, and you must first check in at the military checkpoint a bit further downstream. This area of Mexico is a bit remote. Check security conditions before leaving from either Palenque or San Cristobal de las Casas.

HISTORY AND EXPLORATION
Yaxchilan has a very well defined history. A series of at least 19 recorded kings have been identified covering a time span of over 400 years. Numerous stelae (stone carved markers) found here and at other sites, as well as the on-site hieroglyphic stairways, have recorded a time line of events such as royal births, accessions, deaths, marriages, alliances, conquests and defeats.

The early history of Yaxchilan appears around 350 A.D. and continued for around six centuries until it was abandoned about 810 A.D. Its rise in importance began about 410 A.D. under the rule of Mahk’ina Skull I, who initiated a long lineage of kings. By 510 A.D. the city attained a position as a regional capital. It expanded under the reign of Bird Jaguar II in 681 A.D. and he and his successors left an in-depth record carved on the numerous stelae and lintels. Bird Jaguar IV (Yaxun Balam IV) came to the throne in 752 A.D., and became one of the most well-known kings from the Classic Period.

Yaxchilan was in continual rivalry with downstream Piedras Negras for control over the Usumacinta River. Some of the texts deciphered here record military engagements against that site.

Yaxchilan’s early explorers included Desire Charnay who had named the site Ville Lorilland in the 1880's to honor his financial backer. Others were Maler (1897), and Maudslay (1899) who photographed the site and sent a number of lintels back to the British museum. Carl Ruppert conducted excavations and made field reports in 1931.There have been ongoing excavations, consolidations, and restorations by INAH.

STRUCTURES
This large site contains over 80 noteworthy structures, set among several architectural groups which run parallel to the river, and back up into the surrounding hills. There are more than a dozen structures found along the bank of the Usumacinta River and about the Grand/Main Plaza.

Structure 1 is situated on a natural rise facing the southwest side of the Great Plaza. It contained four inscribed stone lintels which were removed and photographed by Maler in the 1890’s. These lintels correspond to the end of a Katun dated in Maya form 9.16.0.0.0, which corresponds to May 7, 751 A.D., and which details events in the life of Bird Jaguar IV.

Structure 2 is an unrestored mound where a lintel, since removed, and stela were found. Structure 3 is a small structure located to the northwest of Structure 1 in which 2 lintels, one legible were found. Structure 5 contains a mostly eroded hieroglyphic stairway with a succession of rulers named thereon. Structures 6 and 7 have facades that face the river. Structure 10 is a two room building atop a 9 foot/3 meter platform containing three lintels with calendric and historical information on a late ruler, Yaxun Balam IV.

Structures 12 and 13 are located west of the main group and are situated around a ball court. These also contain lintels that were mentioned in the early records of the well-known Maya explorer Maudslay.

​Structures 20-24 are located on the next rise behind the Great/Main Plaza, in an area called the Central Acropolis. Lintels 15-17 once located in structure 21 are now in the British Museum. Structure 23 contained Lintels 24 and 25 and are the most famous of the lintels from the site, and indeed all of the Maya World. Lintel 24 depicts an important bloodletting scene featuring Lady Xoc and the accession of her husband Itzamnaaj Balam II in 681 A.D. Lintel 25 is a masterpiece which shows Lady Xoc invoking an ancestor who emerges from the jaws of a vision serpent. Both of these are also housed in the British Museum. There were also two tombs found here during the 1979 INAH excavation season.

Structure 19, also located within the Central Acropolis, is an impressive well-preserved palace. It retains a portion of a once graceful roof comb. There are four entry doors which lead to interior stairways that interconnect the rooms. The palace is also known as the Labyrinth.

Further back and up a long rising stairway behind the Central Plaza is Structure 33, a beautiful palace with a soaring roof comb. A hieroglyphic stairway is located on its broad steps. There are three doorways all containing carved lintels which lead into a high vaulted chamber. Above the doorways are niches that once held figures, and above the central niche within the roof comb is the remains of a huge figure.

The next group of importance would be the West, or Small Acropolis. Structures 42 and 43 were erected by Bird Jaguar IV in 732 A.D., and commemorate military victories of his father Itzamnaaj Balam II. Each has a carved lintel and sculpted steps.

Structure 40 is a bi-level building located in the South Acropolis where 3 altars and a number of stelae were located. A vivid mural, now mostly lost, was described by Maler. There are other areas including the North West Group, and the South East Group. A number of other lintels and stelae from the site have been removed and are on display in museums around the world. 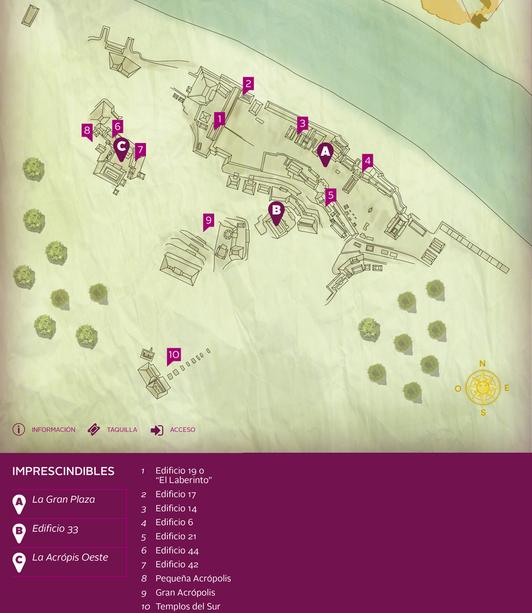 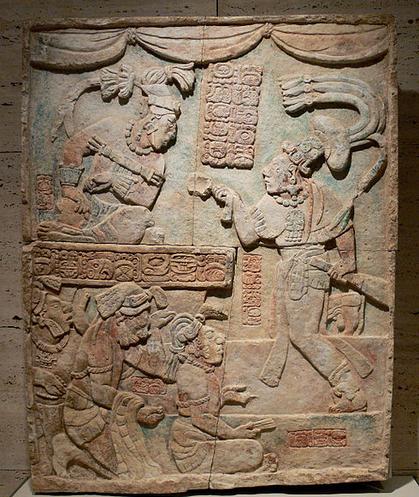 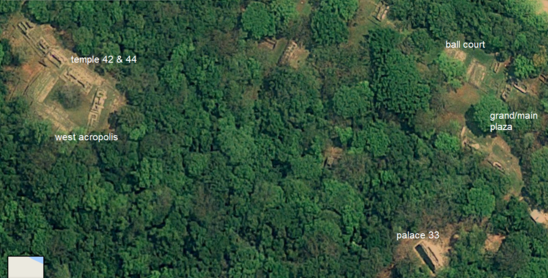 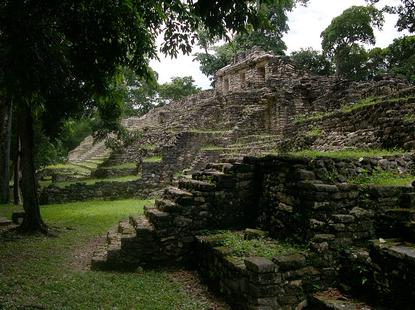 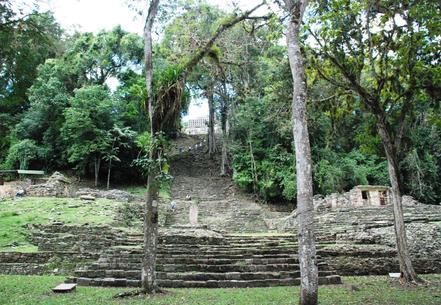 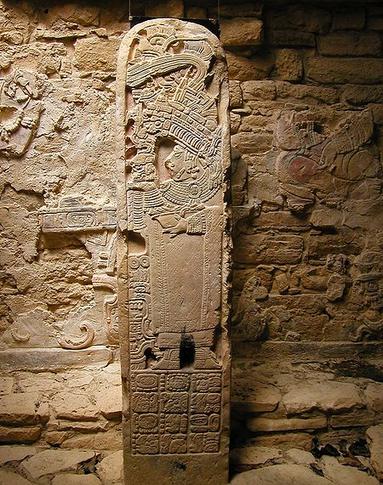 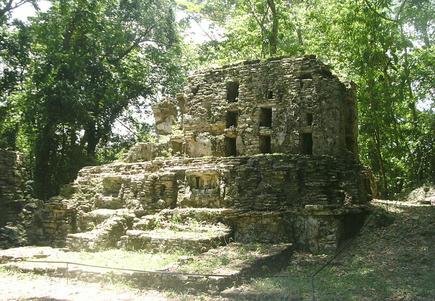 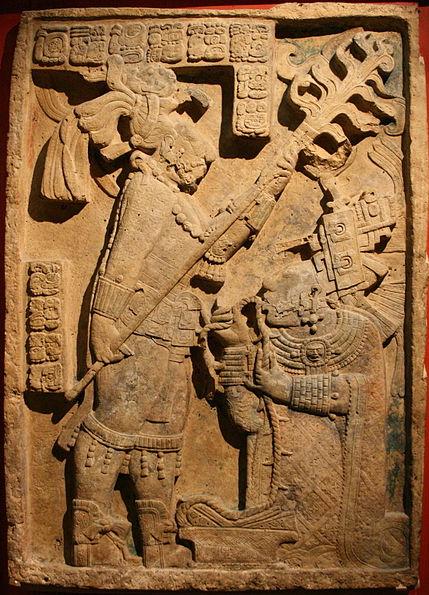 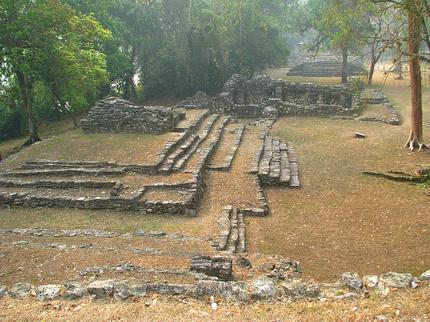 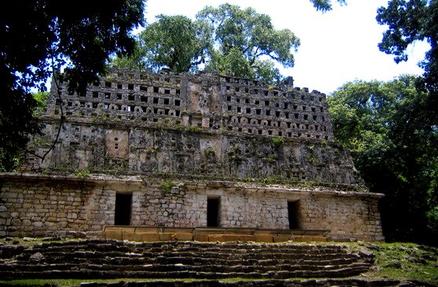 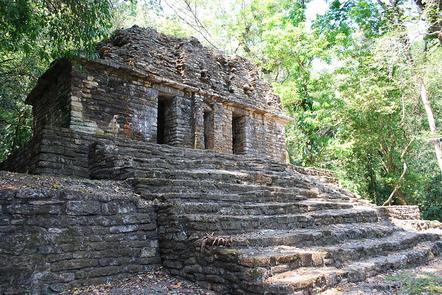 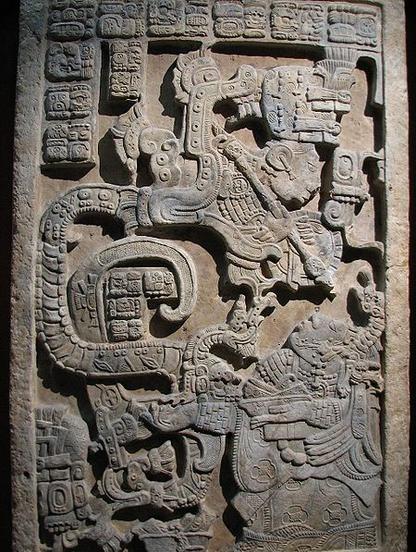 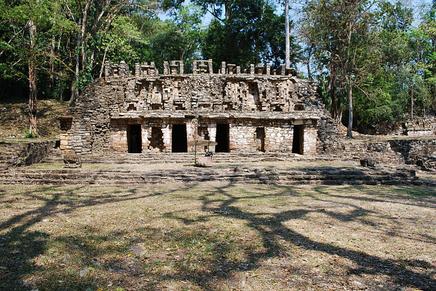