DISCRIPTION
Caracol (snail in Spanish) was one of the great city/states during the Classic Period (200-900 A.D). It covered an area of 55 sq miles/143 sq kms with its outlying regions, and had a population of around 140,000.  The central core area is about 1 sq mile/3 sq kms. Caracol, along with Calakmul and Tikal, was instrumental in forging the destinies of each other and of the numerous smaller cities within the Peten region during the Classic Period. It was strategically situated on the trade routes between the Maya Southern Lowlands and the Caribbean. Over 37 miles/60 kms of sacbeob (white stone roads) have been discovered leading into and out of the site

Caracol is located in a tropical rain forest at the base of the Maya Mountains. It is within the Caracol National Monument Reservation which is situated in the western part of the country about 5 miles/8 kms from the Guatemalan border. Travel to the site can be made from Belize City or from the capital Belmopan.

From Belize City take the Western Highway to Belmopan. Continue west to Georgeville. From there take the road south to the village of Augustine. A free forestry permit is obtained here to continue on into the preserve. Continue onward about an hours drive from Augustine to the site.

HISTORY AND EXPLORATION
Caracol’s settlement history dates back at least to the Early Pre Classic (1000-800 B.C.) with monumental structures commencing in the Late Pre Classic (300 B.C-200 A.D.). A dynasty was established in the middle of the fourth century and continued into the 9th century with 14 kings being identified.

Caracol was early on a vassal of Tikal, but later joined forces with the great city/state of Calakmul, the bitter rival of Tikal. The geopolitics of this era were filled with intrigue, deception, shifting alliances, and warfare.

Caracol made its mark on the region beginning with the succession of the great warrior king Yajaw Te’ K’inich, Lord Water, in 553 A.D. There commenced a series of wars through which he and his sons changed the destiny of the entire Peten area for over one hundred years.

His greatest military campaign was against the powerful city/state of Tikal in 562 A.D. He so thoroughly conquered this kingdom that Tikal endured a hiatus that lasted 120 years in which little new construction or written records are recorded.

His second son, Lord Kan II commenced a series of attacks starting in 626 A.D. against the powerful city of Naranjo, culminating in its complete defeat in 632 A.D. The conquering king had a hieroglyphic stairway installed at that city recording his victory.

Caracol’s grip on the Peten began to weaken at the end of the 7th century with the reemergence of Tikal and Naranjo, and with the new rising kingdom of Dos Pilas. It held on through the next hundred years in a reduced role, yet still a vibrant city. The last recorded monument at Caracol is dated 10.1.10.0.0. Jan 22, 859. By the early part of the tenth century Caracol experiences the same collapse as found at other sites. Some of the site remained inhabited, but was finally abandoned by the middle of the 11th century.

Caracol was only reported on in 1938 by mahogany logger Rosa Mai. Further investigations were carried out by A.H. Anderson the following year. Excavation and restoration work took place in the 1950’s and 1970’s. The site is currently under the direction of Jamie Awe of the Belize Institute of Archaeology, with additional investigations conducted by Dr. Arlen Chase and Dr. Diane Chase of the Caracol Archeological Project.

STRUCTURES
The earliest structures at Caracol date from the Late Pre Classic. These consist of a number of platforms with temples, and an “E Group” which is a complex with astronomical associations. There are five plazas containing 32 main structures. Sacbeob (White stone roads) lead to the outlying areas from the core center.

Group A is located on the western portion of the core area. There are four structures surrounding a small plaza. The plaza contains several stelae and altars.

Structure A6, Temple of the Wooden Lintel, is on the east side of the plaza and has its origins in the Late Pre Classic. It is set on a low platform with the temple itself rising up 5 levels.

To the south of Group A is a ball court and other associated structures. At the south end of the core area is the South Acropolis. It consists of a number of small structures built upon earlier platforms that date to the Pre Classic, and was a residential and funerary complex.

Group B is found at the north end of the central core area. The largest complexes are found here as well as a second ball court. Caana, Sky Place, is an impressive pyramidal structure that reaches a height of 138 feet/42 meters. It is the tallest structure at the site, and in all of Belize. At the top of this truncated pyramid is a courtyard that houses a small group of temples. A number of important tombs have been discovered here.

On the east side of the plaza is the North Acropolis. This complex is built upon a raised platform and has its origins in the Pre Classic. Several structures were built and enlarged upon throughout the Classic Period (200-900 A.D.).. 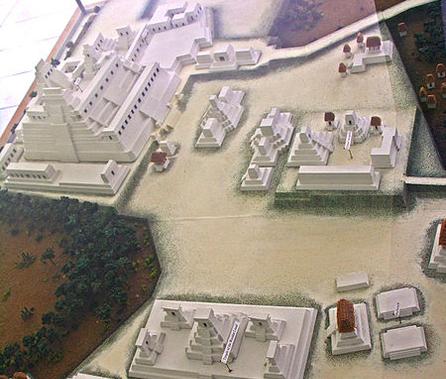