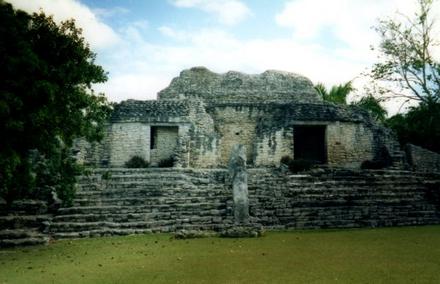 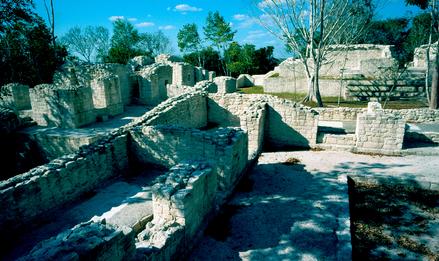 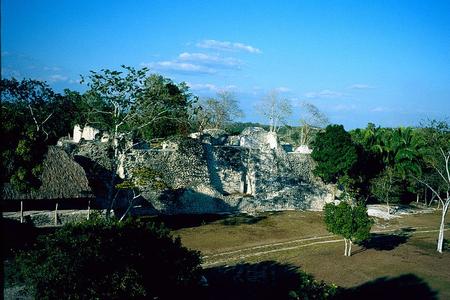 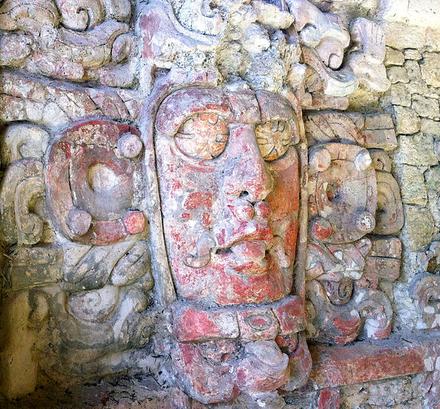 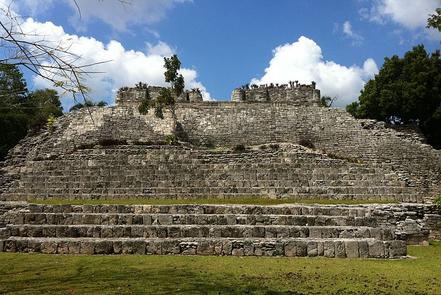 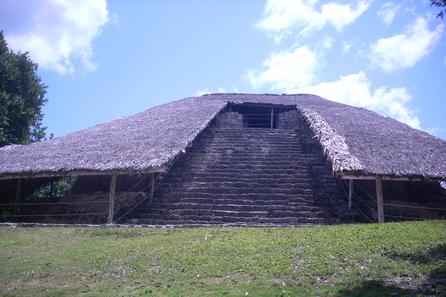 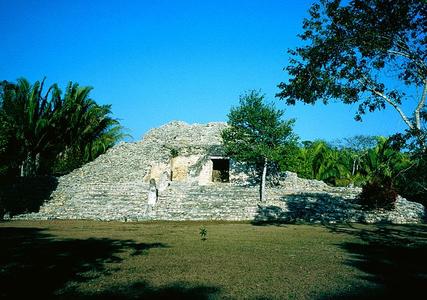 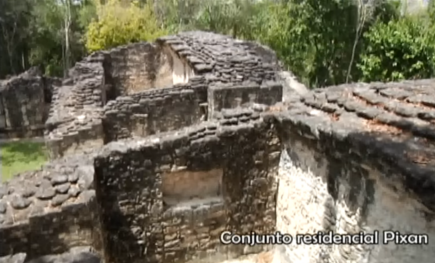 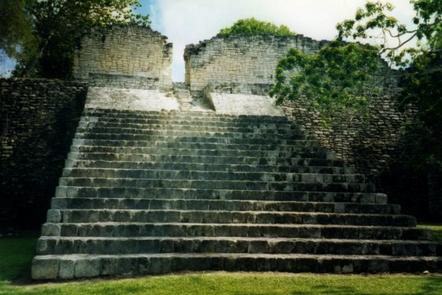 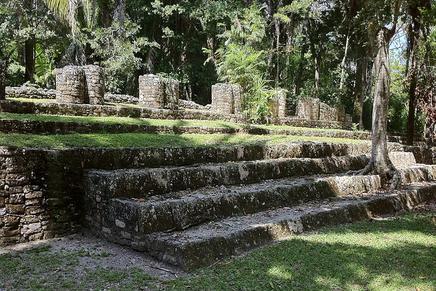 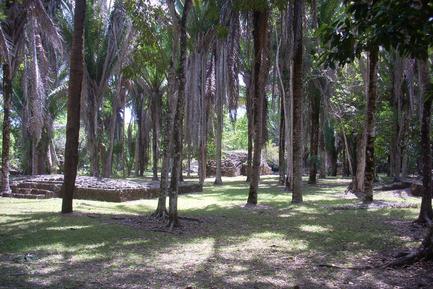 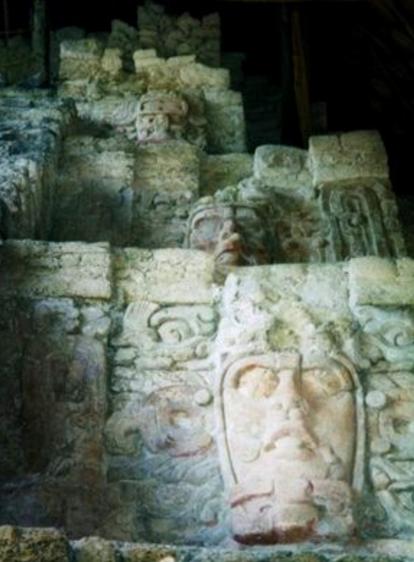 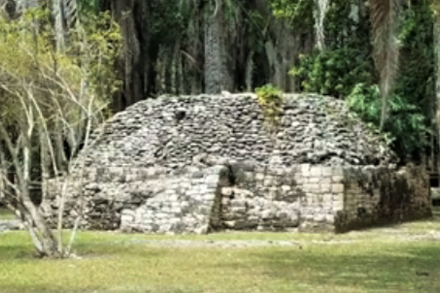 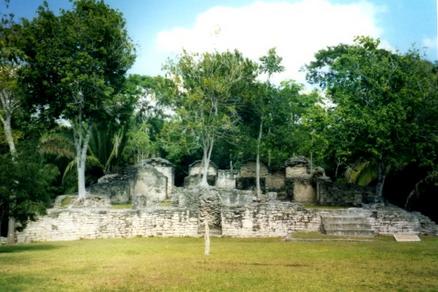 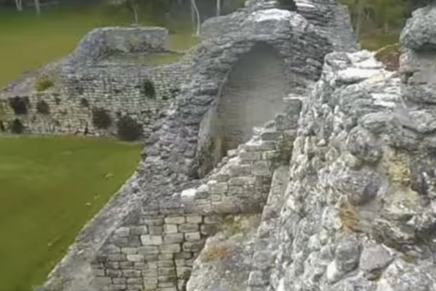 ​DESCRIPTION
Kohunlich is a Maya archaeological zone located in the southwest of Quintana Roo state. The site name derives from the English “Cohoon Ridge”, which refers to a type of Corozo palm tree found in the area. Its original name is unknown.

This is a large site encompassing over twenty acres spread out over relatively flat terrain. Tree shaded trails wind through the sub-tropical rainforest making it enjoyable to explore. While the main attractions are the large Sun God masks, the site has numerous other structural groups to explore. Architectural styles include Peten and Rio Bec.

Within the general area a number of other sites are to be found including the important site of Dzibanche, which is now thought to have been the first location of the great Kan/Snake Kingdom and which later relocated to Calakmul.

HOURS: 8 A.M-5 P.M.
ENTRANCE FEE: U.S. $4.25/80 Pesos. Video camera fee extra.
GUIDES: Inquire at visitor kiosk. Guides can be obtained in Chetumal
SERVICES: Bathrooms
ON-SITE MUSEUM: No, but a community museum is located in nearby Morocoy
ACCOMODATIONS: Lodging can be found at Chetumal, the state capital.
GPS: 18d 25’ 09” N, 88d 47’ 28” W
MISC: your admission ticket may get you into Dzibanche and Kinichna

HISTORY AND EXPLORATION
The earliest settlement activity dates to the Middle Pre-Classic (700 B.C.-300 A.D.) attested to by recovered pottery shards, and low-rise platforms. The Late Pre-Classic (300 B.C-250 A.D.) saw the rise of monumental architecture exhibiting a strong Peten influence. These structures are found in Plaza Yaxna/First House, which is currently closed to the public. During the Early Classic (250-600 A.D) the construction of monumental structures continued and reached its height in the Late Classic (600-900 A.D.).  The site was abandoned in the Terminal Classic (900-1250 A.D.) around 1100 A.D. Excavations reveal early ties to the Peten region in Guatemala, and later with the Rio Bec region farther to the west.

There have been no carved stelae or glyphic inscriptions recovered to identify its rulers or political associations. The architectural influences of both the Peten and Rio Bec areas would seem to indicate a strong trade and/or political relationship.

The site was first reported by Raymond Merwin in 1912. The next explorations did not take place until 1968 by Victor Segovia Pinto of INAH when excavation and consolidation of the site commenced. The 1970’s saw Peter Schmidt, Diana Zargoza and others join the ongoing investigations. George Andrews documented the site in 1981 followed by Adriana Velasquez and Enrique Nalda of INAH in 1993-94. Investigations and restorations continue under the direction of INAH.

STRUCTURES
Kohunlich is mostly set around a series of plazas, with other individual structural groups and residential areas spread over a large area. The site is oriented about 12 degrees east of north, and features a complex drainage system that diverted rainwater into a nearby reservoir/aguada. The most notable structure is the Temple of the Masks.

The Temple of the Masks is a solitary, pyramidal structure set on a small rise on the west side of the core area overlooking the main plaza, Plaza of the Stelae. This very impressive Early Classic (250-600 A.D) structure built in the Peten style of Guatemala stands about 32 feet/10 meters in height. A temple consisting of five chambers is set upon a four-tiered pyramid base, and features distinctive rounded corners typical of Peten architecture. There is a west facing central stairway that is flanked by huge, beautiful stucco masks of the Sun God Kin’ich Ahau, each over 6 feet/2 meters tall. Five of the original eight masks survive. These very rare portraits were carefully preserved when later construction commenced  during the Late Classic (600-900 A.D.). Large masks of the Sun god appear at a few other sites such as on the main pyramid at Acanceh 170 miles/272 kms to the north, and at Cerros in Belize 29 miles/47 km to the southeast.

The site is entered from the northwest. The first group of structures seen is called the Northwest Complex built around a small plaza, a mainly residential area for higher ranking nobles. The raised platforms contain numerous structures, many of which incorporated multiple chambers and corbeled vaulted roofs. A number of lithic objects and scrap have indicated the presence of workshops within the residential area. The west side and a segment of the south side of the plaza is taken up by the Acropolis.

The Acropolis is built atop a large platform, and has a raised interior courtyard. It is accessed by a broad, west facing stairway that leads up from the Northwest Complex Plaza. It is mostly square in shape measuring about 147 feet/45m x 196 feet/60m with an westward extension into the Northwest Complex Plaza. Similar to the Northwest Complex there are numerous structures containing multiple chambers surrounding the interior courtyard, many of them still exhibiting the remains of corbeled vaulted roofs. Several chambers have raised platforms/sleeping areas, many still retaining their original stucco surface.

The south side segment of the Acropolis features a three-chamber structure accessed by its own stairway. These chambers have mostly retained their corbel vaulted roofs. The final construction phase of the Acropolis is from the Late Classic, and completed in the Rio Bec style featuring towers exhibiting steep, faux stairways.

Two groups are located east of the Acropolis. The Plaza Hundida is a low, multi-tiered platform base that houses two ruined structures. The la Aguada Group is further to the northeast, and is not open to the public.  The south side of the Acropolis faces onto the main plaza, Plaza of the Stelae.

The Plaza of the Stelae measures about 260 feet/80 meters square. It is named for the three, plain stelae that are located upon the broad stairway of the Palace of the Stelae, on the east side of the plaza. The structure has a raised platform with a length of about 159 feet/49m facing onto the plaza. A pyramidal structure rises off the central portion of the platform base. While excavated, it is not fully restored except for three single-chambered constructions on the platform level, each accessed through a single entryway. Two of the chamber constructions still retain corbeled vaulted roofs. A low, square altar/dance platform is situated in the center of the plaza.

Plaza Merwin is named after the explorer who first reported on the site. Two altar/platforms are located in the center of the plaza. It may have been of a civic/ceremonial nature due to the Ball Court anchoring the east side of the Plaza.

The Ball Court is of typical design with open end zones on the extreme east end of the plaza. The supporting upper platforms may have at one time supported masonry structures or those of a perishable material. Its orientation is a bit unusual as it is on a NW/SE axis about 104 degrees east of north.

The west side of the plaza is anchored by a linear structure known as the Building of the Twin Columns. A short flight of steps on both the east and west sides lead between pairs of columns into the interior. Behind this structure to the west is a group known as The Roads.

The Roads consists of three parallel east/west “avenues” with residential style structures, lining each side of the “avenue”. The structures are currently unexcavated mounds.

The south side of Merwin Plaza is taken up by another linear structure known as The Building of the Eleven Doors. This structure is set on a low platform with the interior accessed between a series of pillars. Low stairways are on both the north and south sides of the structure. To the west is a small, partially restored structure of about 8 feet/2.5 m in height.

The south side of The Building of Eleven Doors looks towards two residential groups: the Pixa’an Group, and the 27 steps Group. Several burials of high-ranking individuals have been uncovered from within the two groups.

The Pix’an Group is to the southeast of Merwin Plaza. It is a set upon a natural elevation and extends over numerous levels. The constructions show signs of Rio Bec influence. It is a warren of individual multi-chambered structures, courtyards and patios, and is quite pleasant to stroll through.

The 27 Steps Group is located a bit to the southwest of the Pixa’an Group. This is another residential area, and as dense as the Pixa’an Group. It is accessed by a broad stairway to a terrace level. Another stairway then extends upward to a number of multi-chambered structures, patios and courtyards. Some of the structures still retain portions of a corbel vaulted roof.

The Yaxna Plaza is an area currently closed to the public. It is located 1/3 mile/600 meters northwest of the Northwest Complex. Many of the earliest structures are located here dating from the Late Pre-Classic. A number of impressive Early Classic pyramids have been excavated, though not restored. Other structures of a residential, civic, and ceremonial nature have been identified as well.

There are over two hundred mounds located throughout the archaeological zone. Most of these have yet to be excavated. The site paths are beautifully arranged through the shaded forest, giving the visitor a feeling of exploration and discovery. Highly recommended!​

temple of the masks ela ginalska 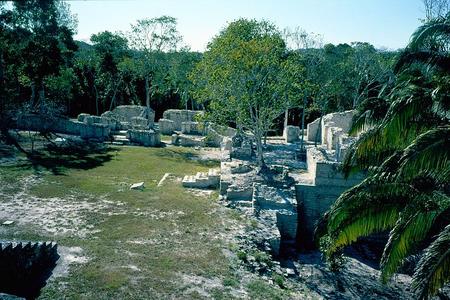 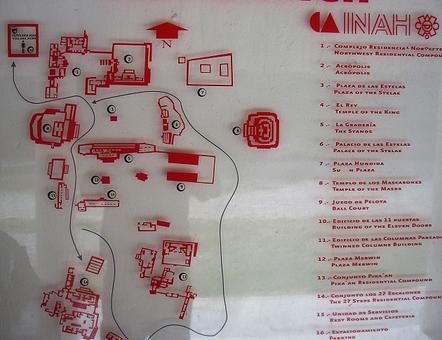 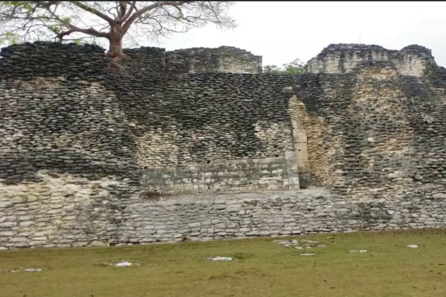 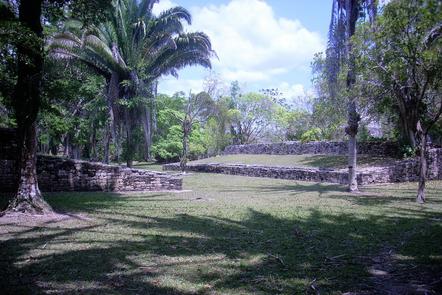 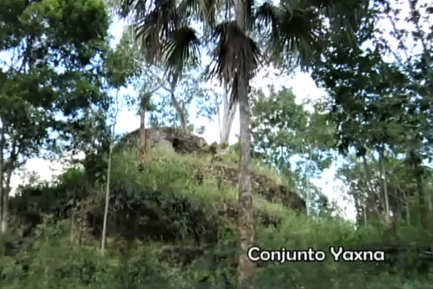