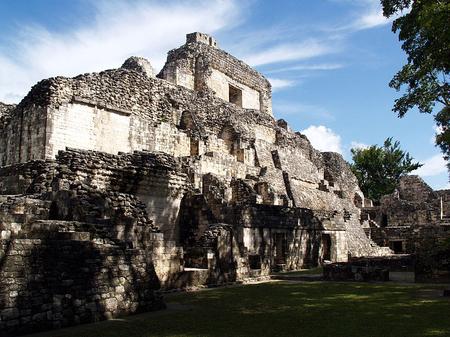 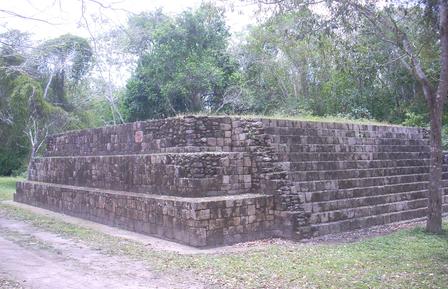 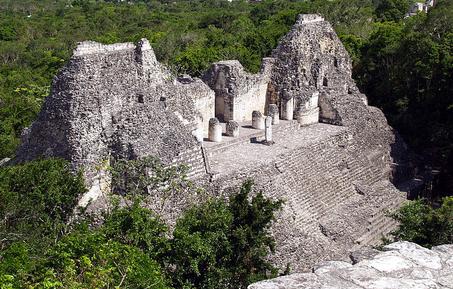 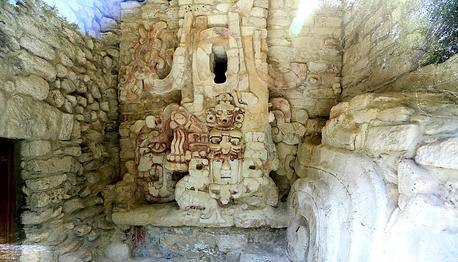 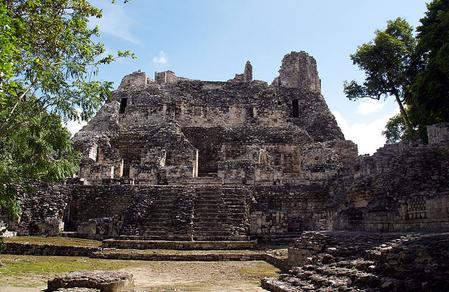 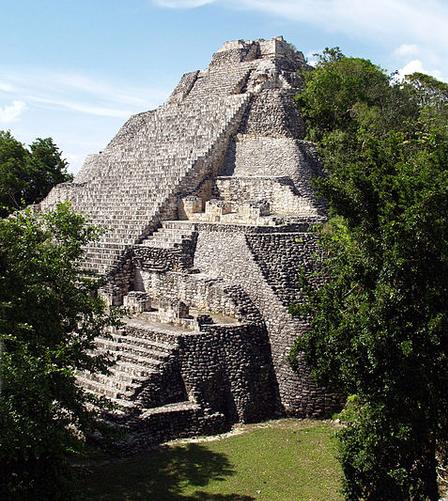 Becan is a noteworthy Maya archaeological zone that is surrounded by both a moat and a wall/embankment. The name is modern and means ravine/ditch or serpent way in Yukatek Maya. The original name is unknown. There are seven entrances over bridges that permitted entry into the site.  The enclosed site encompasses about 16 acres/6.5 hectares, with a much larger outlying settlement pattern. It has one of the largest pyramids in the Rio Bec area, part of a group of sites exhibiting a similar architectural style of construction. These sites include Chicanna, Xpuhil, Hormiguero, Eio Bec and Balam Ku. This style of construction is noted for its high twin towers, non-functioning stairways, and faux temples that crown the tops of the pyramids.  It was first settled around 600 BCE during the Middle Preclassic (700-350 BCE).

The site is located midway between Escarcega and Chetumal on Highway 186, about 5 miles/8km west from the town of Xpujil, also spelled Xpuhil. Campeche is about 186.5 miles/300 km distant.

HOURS:  9 A.M.-5 P.M.
ENTRANCE FEE: $3.75/70 Pesos
GUIDES:  Inquire at visitor kiosk
SERVICES: Bathrooms
ON-SITE MUSEUM: No
ACCOMODATIONS: Food and lodging can be found in the nearby town of Xpujil, or in Chetumal
MISC:

HISTORY AND EXPLORATION
Becan has an early history. The first settlement began in the Middle Preclassic (700-350 B.C). Monumental architecture appeared by the Late Preclassic (350 B.C.-350 A.D) as the site grew in economic and political importance. Many trade goods from the important central Mexican site of Teotihuacan have been found here. Becan appears to have been attacked by an unknown group, possibly from the Peten area between 440-460 CE, and experienced a population decline.  Construction in the Rio Bec style and population growth recommenced during the Late Classic (600-900 A.D.) with the site becoming a regional capital.

Changing political dynamics forced a decline in the importance of the site during the latter part of the Late Classic (600-900 CE), and it was finally abandoned by 1150 CE. To date there have been no monuments or other text discovered to identify its rulers or social/political relationships with other sites though its close proximity to the other Rio Bec sites would seem to indicate one. Central American green obsidian has been found in abundance at Becan which could indicate early trade and/or political ties to Tikal. Calakmul, just 15 miles/24 km to the southwest would certainly have had an impact on Becan’s history, especially during the Tikal-Calakmul wars.

The first reports made of the site were done by Karl Rupert and John Denison in 1934 for the Carnegie Institution. There followed Wyllys Andrews IV, David Webster, Jack Eaton, Joseph Ball, David Potter, and Prentice Thomas between 1969-73. The next investigations were carried out between 1983-85 by Roman Pina Chan. Ricardo Bueno Cano conducted research at the site 1992-94. More recent investigations have been carried out by Luz Evelia Campana, and Vicente Suarez Aguilar.

STRUCTURES
The site is entered from the southwest through one of the original entrances that crosses over the dry moat and leads into the East Plaza/Plaza A. The moat itself encircles the site and is on average 52 feet/16 meters in width, and at least 8 feet 2.5 meters in depth. An earthen embankment fortification follows the course of the moat, and has a height of about 8 feet/2.5 meters.

The East Plaza/Plaza A forms a nice square containing structures I-IV arranged around it. Structure I is located on the south side of the plaza and consists of a large platform base measuring about 213 feet/65 meters in length that contains, on the lower levels, numerous rooms and chambers. Rising above the lower rooms are twin pyramid towers that rise over 45 feet/15 meters in height.

Structure II, is set on a low platform base about 140 feet/43 meters in length, and exhibits a large 45 foot/15 meter high pyramidal structurenorthwest  with lower rooms and chambers such as found at Structure I. The façade of this structure exhibits decorative checkerboard panels in both high and low relief. The structure is situated on the west side of the plaza.

Structure III is found on the east side of the plaza. It is an elongated structure housing numerous, interconnected chambers. Two stairways are located on the plaza side of the structure. In front of this structure is a round platform measuring about 19.5 feet/6 meters in diameter, and 3.26 feet/1 meter in height.

Structure IV is on the north side of the plaza and was a palace type structure. A wide stairway leads up to an upper level courtyard with chambers containing a façade with stone mosaic zoomorphic masks. Behind this structure is an annex which leads northwest to the Central Plaza/Plaza B.

Fronting the east side of the Central Plaza/Plaza B is a monumental structure, Structure VIII, crowned by twin towers. A broad, central stairway leads up to an upper terrace. A plain stela is in the center of the terrace. At the back of the terrace several columns divide a series of nine chambers, possibly associated with the nine levels of the Underworld, the façade of which incorporates a huge mask.

Structure IX is situated on the north side of the Central Plaza. It is a multi-tiered pyramid, and at 96 feet/32 meters is the highest structure at Becan. A broad stairway leads to the summit containing a temple, and this structure was most likely the main religious building at Becan. This structure exhibits three construction phases beginning in the Late Pre Classic (350 B.C-350 A.D.). A rich offering was found inside one of the pyramid’s temples.

Structure X is found on the west side of the plaza. This is a huge palace complex with multiple chambers distributed on two levels. A pyramidal structure rises to a height of 45.5 feet/14 meters. Twin courtyards are located on the north and south sides. A large polychrome mask is built into the south courtyard wall. It features a ruler of the site with his head resting on a small mask. The headdress incorporates twin masks with the jaws of the Earth Monster flanking his side. Above the figure is a cavity surrounded by four lobes which indicates a portal to the underworld, and is recognized as an “ol” symbol. The mask still exhibits red and blue painted stucco, and is behind a protective glass enclosure.

A mound covered structure is seen on the south side of the plaza. Directly behind Structure X is the West Plaza/Plaza C.

The east side of the West Plaza/Plaza C is taken up by the backside of Structure X. Abutting this structure is the main ball court. The two structures form the typical design with the end zones delineated, and the playing field measuring 39 feet/12 meters in length by 29 feet/9 meters in width.

The remainder of the West Plaza/Plaza C is covered in forest, with a large complex on its’ west side. There are numerous other minor platforms and structures located within and without the walled site. 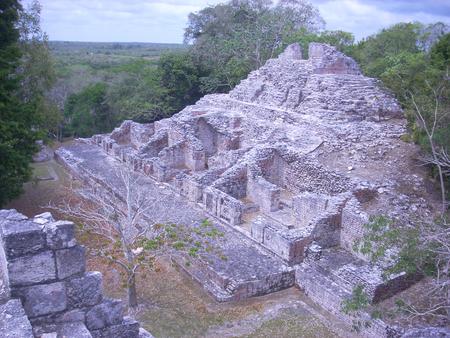 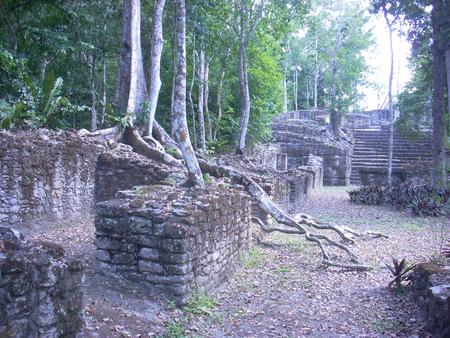 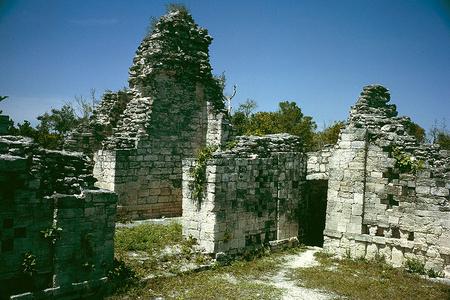 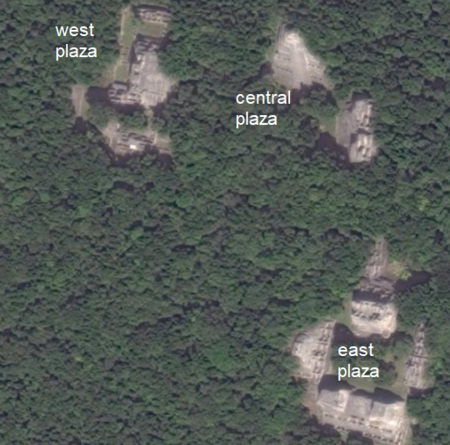 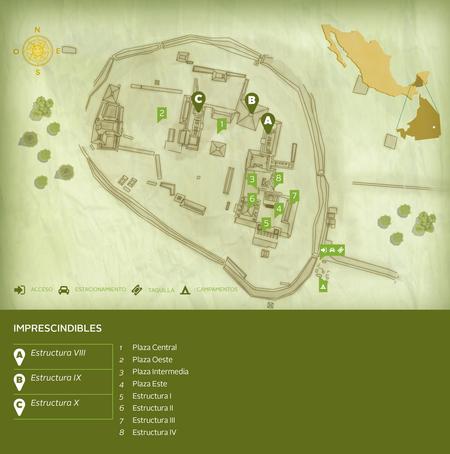 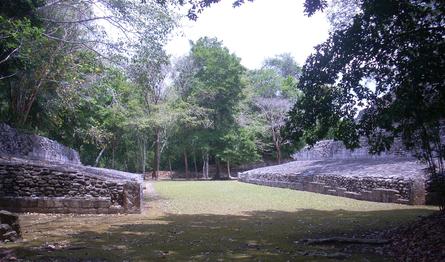 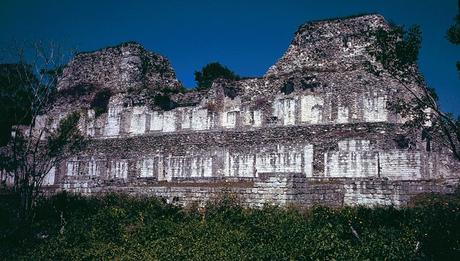 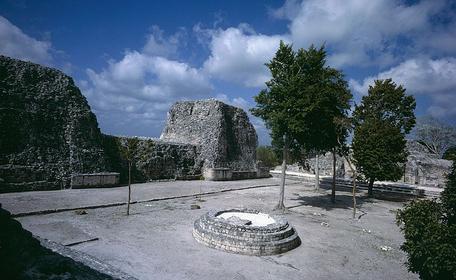 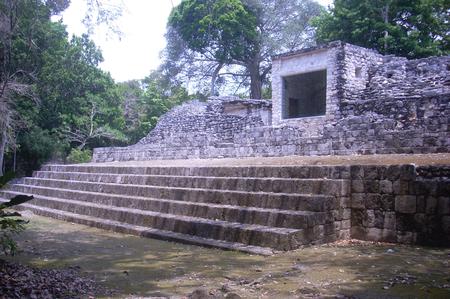