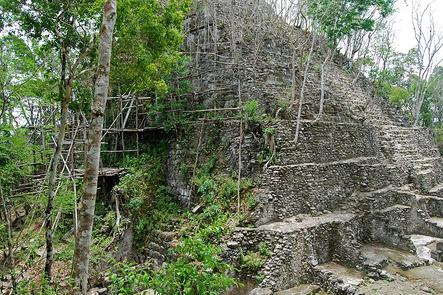 DESCRIPTION
​​El Mirador, a huge Preclassic (1000 BCE-150 CE) archaeological zone, has been called by some “The Cradle of Maya Civilization”. It was, in its time, the largest city in the Americas. It is still the largest known Maya site encompassing an area of 15 sq. miles/36 sq. km. The pyramid complex of La Danta, by volume, is considered by some to be the largest structure in the Ancient World.

The ceremonial/civic center of the site encompasses 9.6 square miles/ 25 sq kms. The population of the city and its environs at its peak has been placed at around 100,000 inhabitants. There are a series of impressive sacbeob (raised white stone causeways) that run within the city and connect with outlying residential areas, and extend out to sites such as Nakbe (8 miles/13 km), Wakna (10 miles/16 km), and Tintal (12 miles/20 km).

El Mirador is located deep within the rain forest of the Mirador Basin, which is in turn a parcel of the Maya Biosphere Reserve. The Mirador Basin contains the largest concentration of Preclassic sites, including Nakbe, La Muralla, and Tintal, among others.  The area borders on the Calakmul Biosphere Reserve in Mexico, with El Mirador being just 4 miles/6.5 km from the frontier.

The investigations and discoveries at El Mirador have changed the understanding and history of the cultural and architectural importance of the Preclassic period. It now appears that all of the components of Maya society were in place several centuries before the advent of the Classic period (150-900 CE).

Travel to the site by land is fraught with difficulties, and is recommended for only experienced hikers (or those in good physical shape) as there are no roads into the site. Tour arrangements can be made from Flores, the trailhead at Carmelita or, for those with a fat wallet, by helicopter.  Flores is most easily reached by plane from Guatemala City, an island city in Lake Peten Itza. It can also be reached by car/bus from Guatemala City north on Highway CA9 to Highway CA13, or from Belize west on Highway CA13. Modern Flores, ancient Tayasal, was the last independent Maya Kingdom to hold out against the Spanish onslaught which finally fell in 1697.

HISTORY AND EXPLORATION
The earliest settlement dates from around 1000-900 BCE, and monumental architecture begins to appear around 600 BCE. El Mirador reached its peak between 400 BCE and 200 CE, developing an advanced concept of architectural design, and ruled over the entire Mirador Basin. At the end of this period however, El Mirador and the other Mirador Basin sites were inexplicably abandoned, or at the least severely depopulated. A defensive wall was constructed at this time, and it appears that warfare hastened the demise of the site as a major center. Similarities in architecture and ceramics at the Early Classic site of Naachtun have led some researchers to believe that a remnant elite class from El Mirador may have migrated to this site.

The site experienced a population increase during the start of the Late Classic (600-900 CE). Structures on a much smaller scale were erected in and around the ceremonial center. Foreign goods such as jade, obsidian and flint indicate that the site was part of the vast trade network that existed throughout the region.

During this time period a beautiful, distinctive type of ceramic pottery was developed known as “Codex Style”. One area of production has been identified in the northwest portion of the site and has been dated between 640-760 CE. Little information has been deciphered concerning its rulers though it appears that El Mirador may have been a vassal of Calakmul during the 7th and 8th centuries. El Mirador was abandoned for the last time around the beginning of the Terminal Classic (900-1100 CE).

El Mirador was not heard from again until 1885 when an area survey of the Mirador Basin was conducted by Claudio Urrutia who reported seeing large ruins. Forty-one years would pass before aerial photographic surveys in 1926, and then in 1930 again revealed its existence. The first serious exploration was in 1962 by renowned researcher Ian Graham, who produced the first map of the site. The Mirador Project commenced investigations in 1978-83. Explorations, excavations, consolidations and investigations have followed.

Dr. Richard Hansen from Idaho State University has been leading the current investigations. He made a spectacular find in 2009 uncovering an exquisite frieze depicting the Hero Twins swimming in the Underworld retrieving the head of their father, the Maize God. This frieze is dated to 300 BCE and confirms continuity in mythological beliefs among the Maya as related in the sacred Popol Vuh recorded 1900 years later.

STRUCTURES
El Mirador appears to have been designed along astronomical lines. There are two main groups that define the site. Located in the core civic area, these groups are of a Preclassic architectural style known as a “triadic pattern complex”. They consist of large tiered platforms surmounted by three pyramids, with the largest in the center and the other two flanking it, all looking into a courtyard/plaza.

​The East Group is comprised of several structural complexes arranged around a central plaza. The largest and most important is the pyramidal La Danta complex which rises to a dizzying height of 232 feet/73 meters, and is located on the east side of the plaza. This entire structure when considered as a whole is thought by some to be the largest structure in the Ancient World.

It has been estimated that as many as 15 million man-days of labor were necessary to complete the construction of La Danta. A group of 12 men would be required to carry each thousand pound block. A mammoth undertaking!

The second tier of the pyramid covers an area of 4 acres/1.6 hectares and has a height of around 33 feet/10 meters as well. The third tier rises to a height of 86 feet/26 meters and forms the summit for the pyramid.

The summit contains three temples arranged in the triadic configuration. This architectural style was prevalent during the Preclassic period. It is thought to represent the 3 hearth stones of creation which in Maya mythology was located within the constellation of Orion. Within this triangle is the Orion Nebula (M42), a birthplace of stars, and for the Maya the celestial hearth containing the fire of creation.

The west side of the plaza houses a small group, two of the structures forming an “E” Complex, an architectural group prevalent in the Preclassic, and which has been determined to represent an astronomical complex designed for observing the solstices and equinox. The north side has a palace type structure, and the south side an acropolis known as La Pava which reaches a height of 104 feet/32 meters. A central stairway was flanked by four carved masks representing a manifestation of Itzamna leading up to a triadic group of structure.

Behind the La Dante pyramid are two small groups identified as Venado and Loro Real. A sacbe leads off the southeast corner of La Danta to the site of Nakbe located 8 miles/13 km away.

An internal sacbe about 1,956 feet/600 meters in length leads west from the La Dante Group into the West Group. This sacbe is about 130 feet/40 meters wide and features two pass-through channels that allowed water to flow between the surrounding swamps. A nice piece of hydraulic engineering.

The West Group is the main group at the site. This group is centered around a large plaza, the Great Plaza, with the El Tigre Complex on the west end; the Central Acropolis on the south side; the Chicharra Complex on the east; and the Leon Complex on the north side.

The El Tigre pyramid platform complex contains several structures set upon a high platform plaza. The platform measures 459 feet/140 meters x 442 feet/145 meters. Structure 34, Temple of the Jaguar Paw, is located on south side of the platform plaza. This structure reaches a height of 55 feet/17 meters. A broad central stairway leads up four staggered levels to a broad terrace containing the triadic arrangement. A secondary stairway, flanked by huge deity masks set on sloped panels leads up to the central structure, the Jaguar Paw Temple. The temple contains an earlier sub-structure that has a beautiful mask with its original red painted surface. This early structure has been dated to 600 BCE, contemporary with the Olmec, and has forced a new interpretation of this time period due to its unexpected sophistication.

The El Tigre pyramid is situated on the west side of the platform and rises up 5 levels to a height of about 131 feet/40 meters. The summit again is crowned with a triadic configuration. Recent discoveries have revealed skeletal remains with arrow points imbedded in their ribs, a sign that the beginning of the Classic period brought about an abrupt and violent end to El Mirador’s early history.

The Central Acropolis is built upon a massive platform base measuring 1,304 feet/400 meters x 1,630 feet/500 meters, and rises 32 feet/10 meters above the ground level plaza. It is composed of 19 major structure and numerous small buildings situated on interconnected, raised levels. Structure 313 is located in the southwest portion of the acropolis and has similarities to Structure 34 of the El Tigre Complex. It is a truncated platform with a central stairway that leads to a terrace summit that at one time held a triadic assemblage. The central temple has its own stairway flanked by deity masks.

A well-managed water catchment system has been identified within the Central Acropolis. A stunning discovery was made in 2009 of twin stucco friezes that run 26 feet/8 meters along the retaining walls of the system. It features the Hero Twins of Maya mythology, Hunahpu and Xbalanque, swimming in the Underworld retrieving the decapitated head of their father, Hun Hunahpu. The frieze recounts the story told in the Quiche book, "The Popol Vuh", a thousand years later and clearly shows the continuity of Maya religion and mythology.

Recent excavations have revealed a new frieze on a lower level containing a serpent head glyph related to the site, and identifying it as the Kaan Kingdom polity. This emblem glyph was also used by the great kingdom of Calakmul centuries later. Whether there is a connection between these two kingdoms separated by time is still under investigation. A very intriguing prospect nonetheless.

Within the Great Plaza a stela, Stela 2, has been located. The stela has been dated stylistically to the Preclassic.

The Leon Complex is on the north side of the Great Plaza. This group contains an “E” Complex. Within the small plaza between the two structures a stela, Stela 1 is located. Unfortunately, it is too deteriorated to provide any information. The Cutz Complex holds down the northeast corner of the Great Plaza. The Cascabel Group is located to the north of the Leon Complex, and has a structure rising to 91 feet/28 meters among the tallest structures from the Middle Preclassic. The Monos Group is located just to the south of the Acropolis and is defined by a pyramidal temple that rises to a height of 157 feet/48 meters.

There are many other smaller complexes and residential areas such as Gavilan, Puma, and Guacamaya that are interspersed throughout the vast site.​ La Muerta is a small, closely associated site located 2 miles/3.2 km to the south, and linked by a sacbe. Its most interesting structure is a rare, 2-level labyrinth.

Numerous sacbeob (raised white stone roads) radiate out from El Mirador connecting internal groups and neighboring sites. These roads provided crucial means for the rulers of El Mirador to rapidly interact, and control its vassal territories. They functioned just as modern road systems do today moving people, products and ideas. They also acted as pilgrimage and ceremonial routes, as well as, having acted as a system of hydraulics to control the flow of seasonal water. A very impressive site. 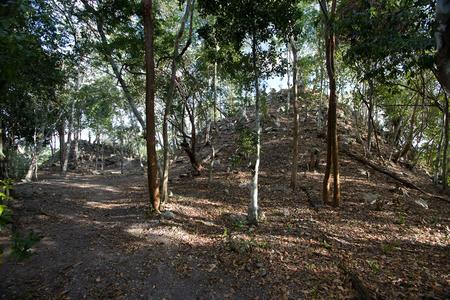 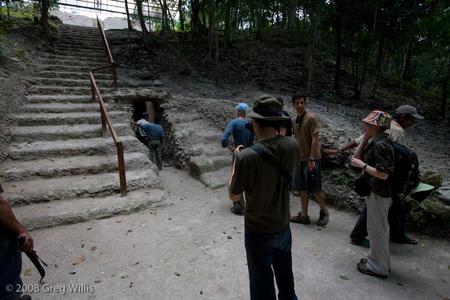 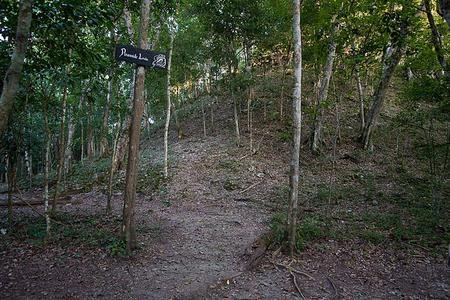 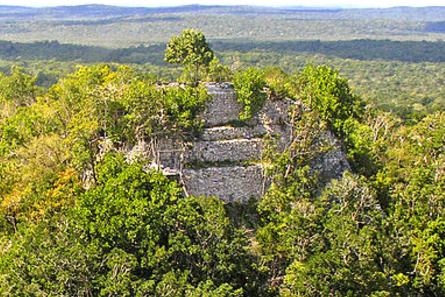 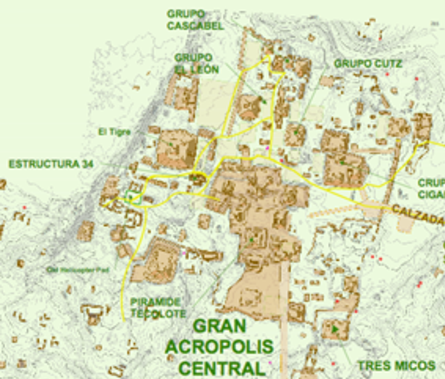 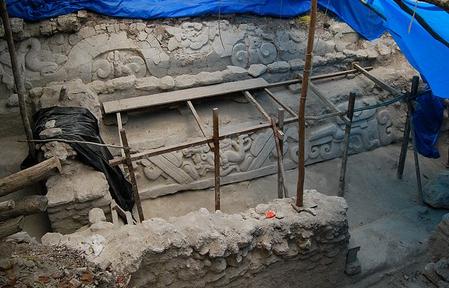 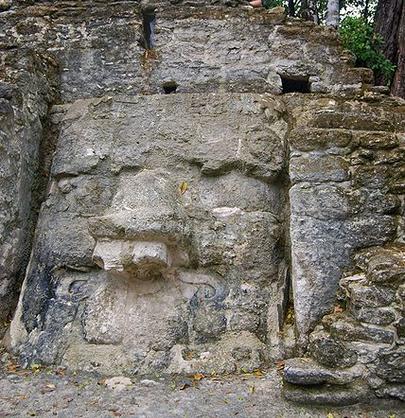 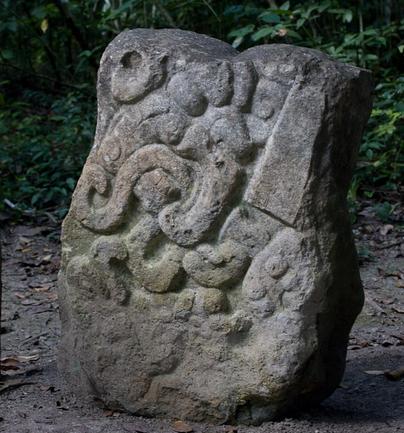 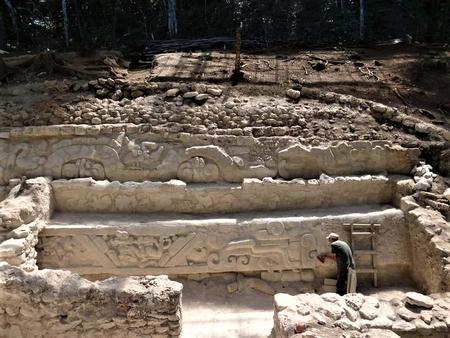 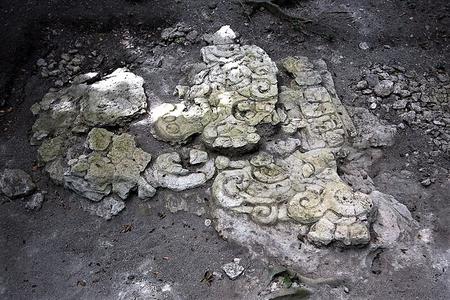 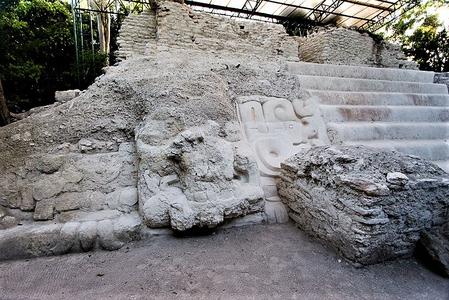 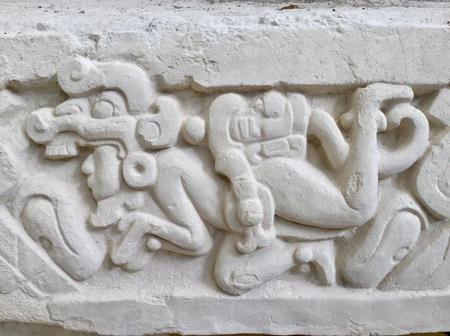 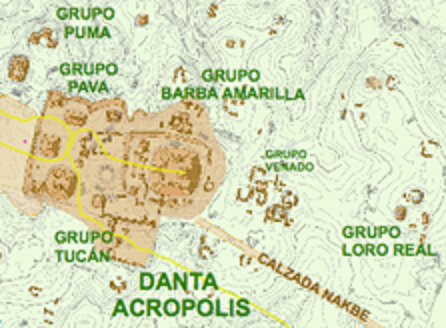