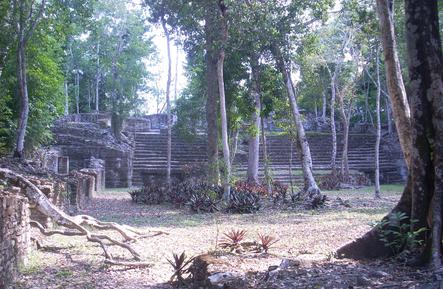 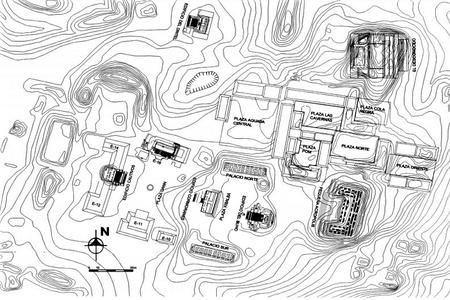 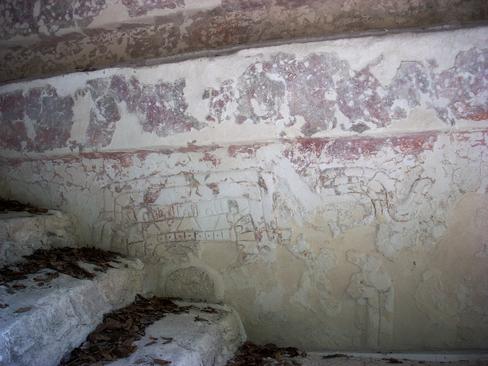 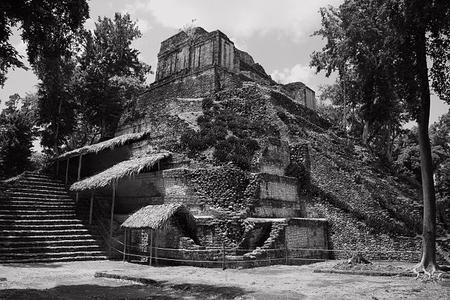 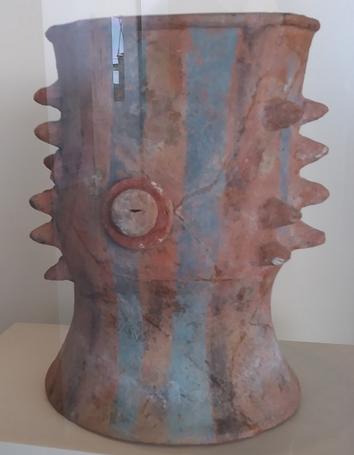 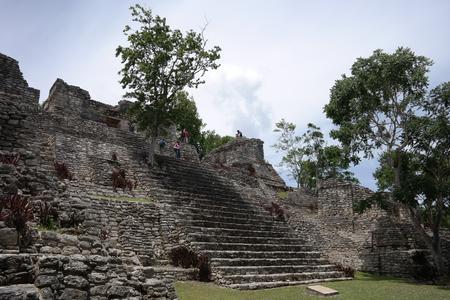 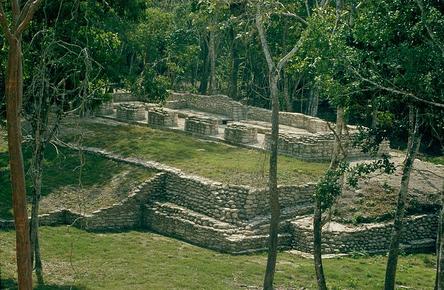 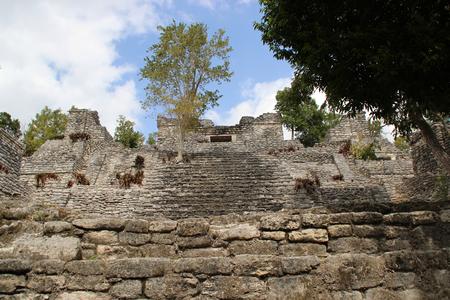 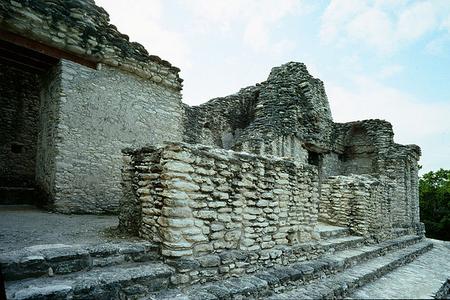 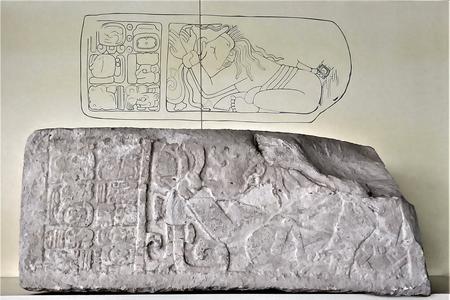 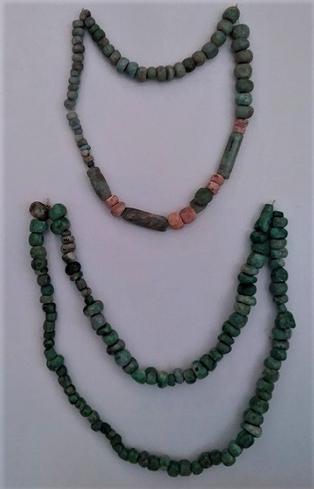 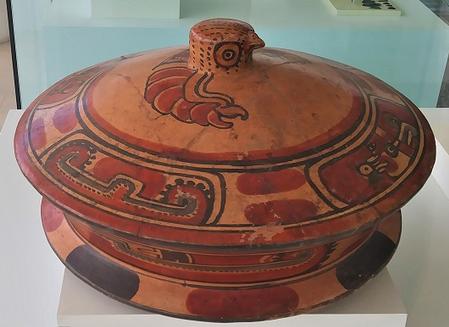 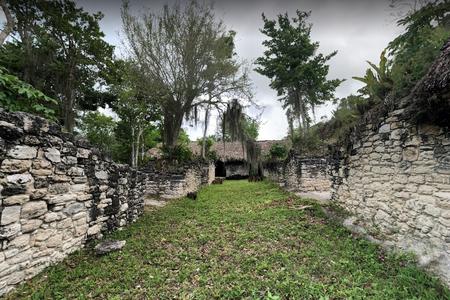 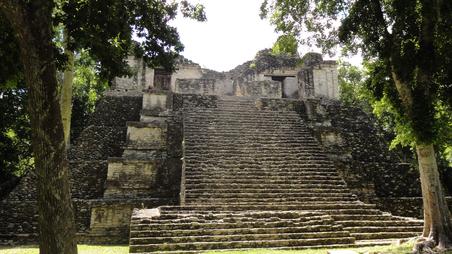 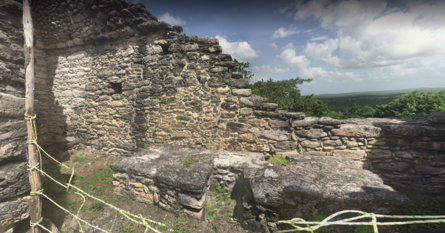 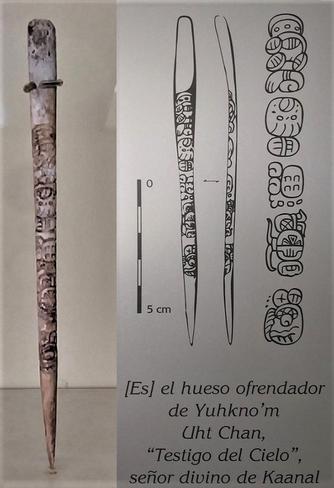 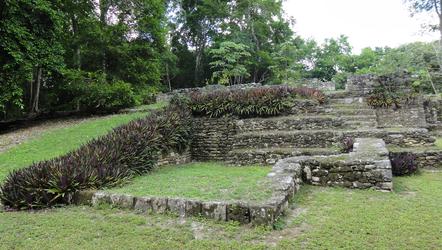 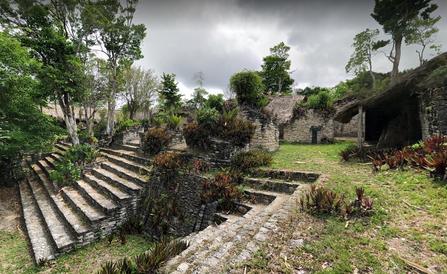 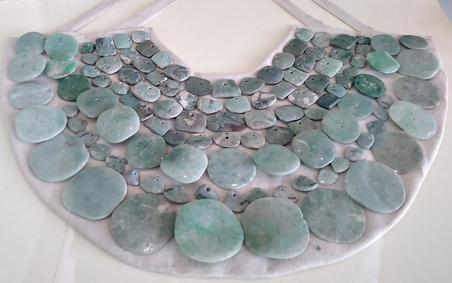 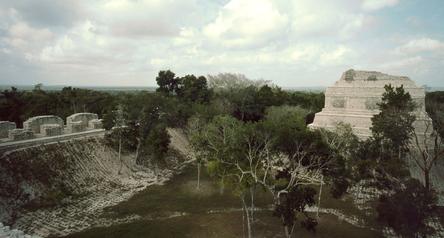 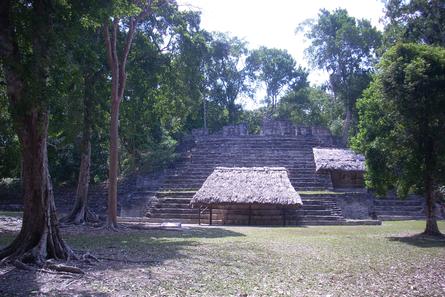 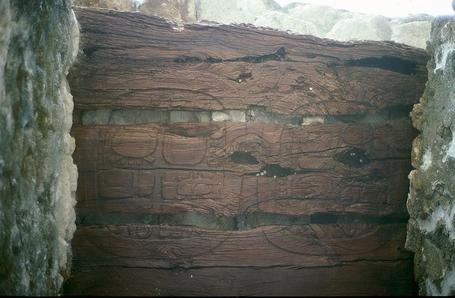 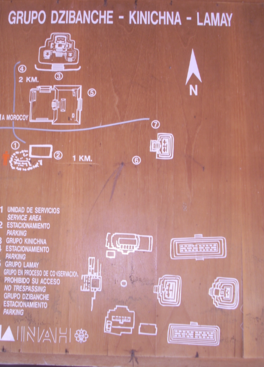 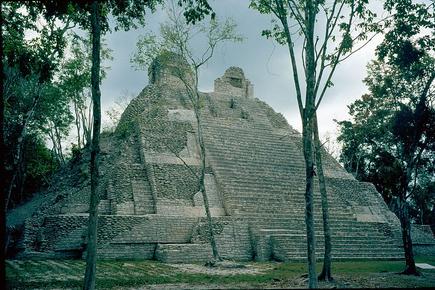 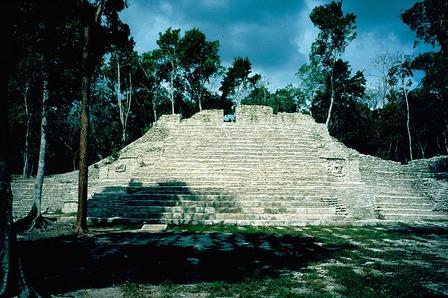 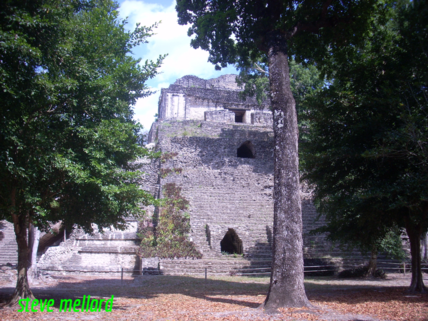 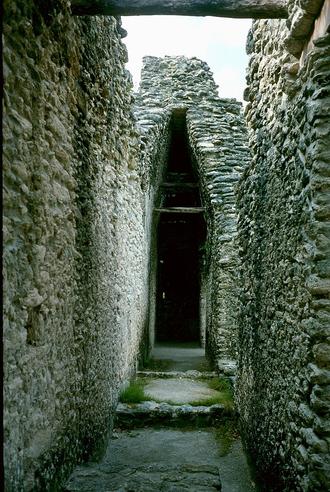 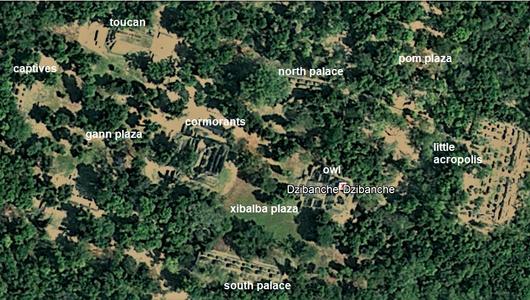 DESCRIPTION
Dzibanche is an important archaeological zone located north of the ruins of Kohunlich. The name means “writing on wood” in the Yucatec Maya language, and is named for a wooden support lintel carved with glyphs found in one of the temples. The site is spread out over 7.7 sq. miles/20 sq. kms, though the core area is much smaller and easily visited. Its peak population has been estimated at 40, 000 inhabitants.

It has been tentatively established that this was the original location of the mighty Kaan Kingdom of Calakmul. The site dates from the Late Pre Classic (300 BCE-250 CE) through the Late Post Classic (1100-1450 CE).

There are four main groups associated with the site, two of which are open to the public. This site is rarely visited and you will probably have the place to yourself. The sub-tropical rain forest is quite dense here. Monkeys pass overhead and break small branches to drop down on you. You’re in their territory after all. But they are otherwise harmless. Toucans and other birds fill the air with sound and silently glide among the trees. A visitor kiosk is located at the intersection before the site on the right-hand side. It is not clearly marked, so watch for it.

If you visit here in March, please drive slowly on the road to the site. The area is filled with thousands of iridescent blue butterflies migrating across the fields and road. Step out of your car and be surrounded. It’s quite an experience.

Dzibanche is located off Highway 186 about 52 miles/83 km west of Chetumal. Turn north at kilometer 58 towards the town of Morocoy. It is past the town, about 16 miles/25 kms from the turnoff.

HISTORY AND EXPLORATION
The Kannu’l Dynasty was among the most powerful kingdoms in the Maya World. Ceramic evidence dates the beginning of settlement of the site to the Late Pre Classic (300 BCE-250 CE). The erection of monumental building structures commenced in the Early Classic (250-600 CE) evincing a strong Peten influence. A carved lintel beam with glyphs has been dated to 554 CE. It has since been removed for preservation. The Temple of the Captives exhibits a hieroglyphic stairway with intricately carved risers of captives and text. One of the risers contains a snakehead emblem glyph associated with the Kaanu’l Dynasty (Calakmul) and dates to 464 CE. It is the discovery of this glyph block that has led researchers to believe that Dzibanche was the early capital of the Kannu’l Dynasty. Other risers identify a ruler of Dzibanche named Yuhkno’m Ch’een I, and may place him in the general time frame of the mid 5th century. Another ruler, Yax (?) Yopaat, is mentioned on a glyph block celebrating a Katun Ending in 9.7.0.0.0 7 Ahau 3 Kankin, December 7, 573 CE.

Dzibanche/Calakmul and Tikal were the two great ‘Superpowers’ of their day. They were in constant rivalry with each other resulting in numerous victories and defeats between themselves and their respective allies. A ruler known as Yuhkno’m Uht Chan, aka Sky Witness; reigned c.561-572. It was during his reign in 562 CE that Tikal was thoroughly defeated resulting in its 150-year long hiatus. His elaborately furnished tomb is located within the Pyramid of the Cormorants.

At some point during the late 6th century the ruling dynasty, or perhaps the senior line, moved to Calakmul. The first identifiable appearance of the Snake Kingdom emblem glyph appears on a stela there dating to 631 CE. The exact arrival date and circumstances are still under investigation. Dzibanche, however, continued on and apparently thrived, exhibiting a late glyphic text recording a date of 909 CE. The site experienced a reduced population by 1200 CE.

The area was first reported on by Thomas Gann in the 1927. Peter Harrison included the site in a regional survey in 1972-74. In the late 1980’s archaeologists associated with INAH began excavation and consolidation of the structures. Work has been ongoing.

STRUCTURES
There are four main groups associated with the site, and spread out over a large area. The groups are named Dzibanche, Kinichna, Tutil, and Lamay. Only Dzibanche and Kinichna are open to the public, though the Lamay Group can be seen on the left-hand side of the road on the way to Dzibanche. These groups are linked by sacbeob, raised white stone causeways.

Dzibanche contains the most important civic and ceremonial structures of the site. They are set on an east/west axis about 16 degrees east of North. There are several plazas of which three are currently open to the public.

The first structure seen when entering the site is Structure XVI, the Temple of the Lintels. It set slightly to the north of Gann Plaza. The structure is of a four-tiered pyramidal platform having a broad, west-facing stairway leading to the summit. The summit houses a masonry temple structure consisting of twin bays. The pyramid base displays an architectural style found at the great Central Mexican capital of Teotihuacan. A lintel support beam was discovered within the temple having a glyphic text commemorating a Katun Ending of 9.6.0.0.0 9 Ajaw 3 Wayab, March 22, 554 CE, which was very close to the Spring Equinox. It also mentions an accession to rulership in 551 CE, though the ruler has not been reported on.

The Gann Plaza is named after the well-known archaeologist who first reported on the site. This plaza is situated on level ground, and is dated from the Late to the Terminal Classic (600-1150 CE). The main structure is located on the east side, and is known as the Temple of the Cormorants. This is the highest pyramid at the site, and features Teotihuacan talud-tablero architecture. A number of friezes are associated with this structure. This multi-tiered pyramid base houses a superstructure of masonry construction. An impressive central stairway leads from the plaza level to the summit temple. Three entrances to the multi-chambered temple are divided between two pilasters.

A rich tomb was found within one of three vaulted chambers that was located within the pyramid platform base. One of the funerary offerings is a ceramic vase decorated in the style of a bird that gives the temple its name. Also found was a jadeite mask with obsidian and shell inlay, and an impressive multi-piece jade breastplate. A bloodletter implement was discovered upon the pelvis of the ruler’s skeleton and identifies him as Yuhko’m Uht Chan/Sky Witness.

The Temple of the Captives is located on the west side of the Plaza. This structure, Structure XIII, is an elongated, three-tiered platform base crowned with a temple containing three chambers.

Large, carved stone risers form a central, hieroglyphic stairway, and may have been re-erected here from an earlier structure. Each block features a bound captive and text. Two of the risers identify a Dzibanche ruler as Yuhkno’m Ch’en I, and one of the captives is named Yax K’ahk’ Jolo’m, possibly from El Resbalon. It is here where one of the risers contains the snakehead emblem glyph associated with the Kaanu’l Dynasty (Calakmul) and dates to 464 CE. Most of the steps have been removed for preservation or museum display.

Structure E11 is a large, low platform base surmounted by a range type masonry structure having a number of chambers entered through four pilasters. There are some additional foundations at the plaza level, and at the rear of the structure. Structure E10 is an unrestored mound.

The backside of the Temple of the Cormorants faces onto a raised plaza, the Xibalba Plaza. It is accessed from a stairway on the northwest side of that structure. The Temple of the Owl, Structure I, is the main structure of this plaza group. It is an imposing pyramid featuring Peten style architecture. A broad, central stairway leads up to a multi-chambered temple. Here a tomb of a high-ranking female, and dating to the late 5th century was located via interior stairways. A rich array of funerary objects was found in this tomb including a rare alabaster bowl with a monkey, and a carved shell depicting a ruler holding a scepter with jade and pyrite inlay. Jade and shell jewelry including necklaces and ear spools were also found along with a number of ceramics including one that has given the temple its name. A very rich find attesting to the wealth and political importance of the individual and the site. Many of these items are now on display at the Museo Maya in Cancun.

On the north and south sides of the plaza are palace structures set upon high platform bases. Each structure contains two parallel bays, and is accessed through nine doors in a possible reference to the nine levels of the Underworld.

Behind the Temple of the Owl is a small plaza. On the east side of this plaza is a large complex known as the Small Acropolis This complex underwent excavation and consolidation during the 2003-2009 field seasons. It dates from the Late Classic (600-900 CE), and was the main center of occupation in the Post Classic. The structure is set on a high platform base and resembles an open ‘C’, and features two levels containing four structures on the upper level. A broad stairway leads up to the first level terrace. Three secondary stairways then proceed to the second level. The main structure is divided down the center by interspersed pilasters forming two long galleries.

An interesting discovery of a sky band and the remains of stucco decoration were identified within one of the structures. Graffiti dated to the Post Classic has been identified on the walls of the structures depicting figures, animals and buildings.

Numerous items have been recovered from the Small Acropolis excavations. Late Classic through Post Classic ceramics have been found, along with a large number of effigy censers in the Mayapan style. Surprisingly, copper bells and rings, and ornaments of tumbaga and gold have been recovered. Flint and obsidian knives, jade beads and carved shell have also been identified. Evidently in the Terminal and Post Classic Dzibanche was still well connected to the numerous trade networks, both coastal and inland.

To the north of the Small Acropolis are three plazas, the Pom Plaza, Plaza Norte, and the Plaza Oriente. These are considered to have been elite residential compounds.

The Kinichna Group is located back near the visitor kiosk and down a side road. The main structure is a monumental platform base containing an acropolis on three levels. It is an impressive Early Classic structure set in a forested area around a small plaza fronted by low platforms. Two royal burials were located within the structure. The rear of this structure displays a stucco Kin/Sun sign which gives the group its name. Well worth the short drive. 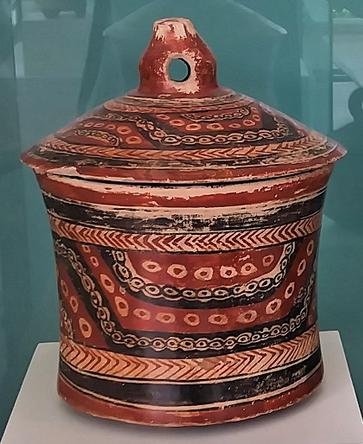 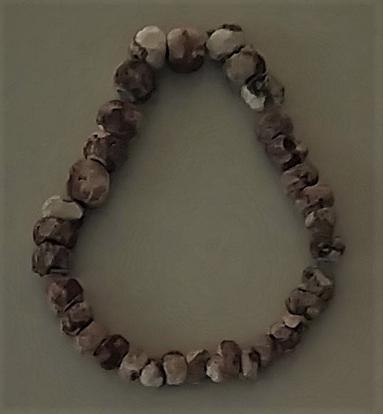