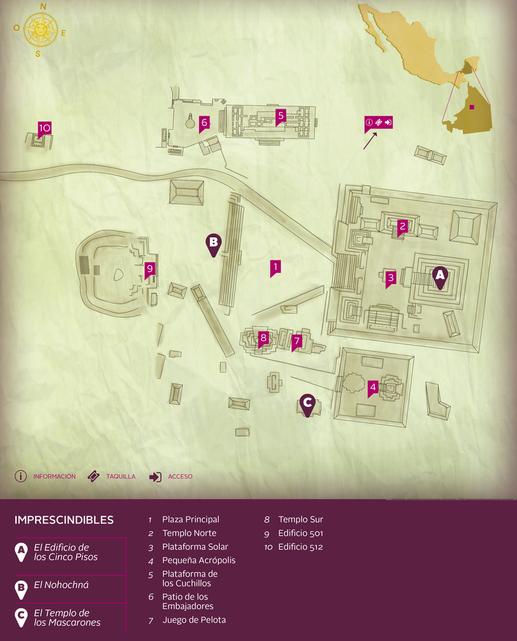 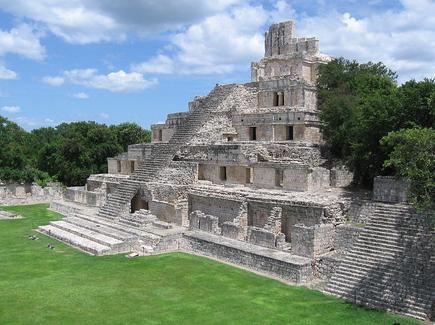 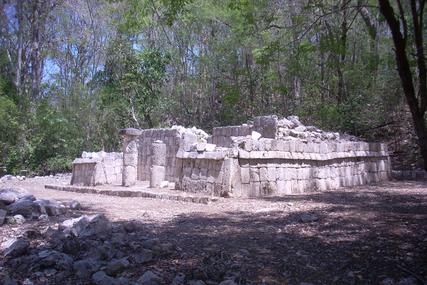 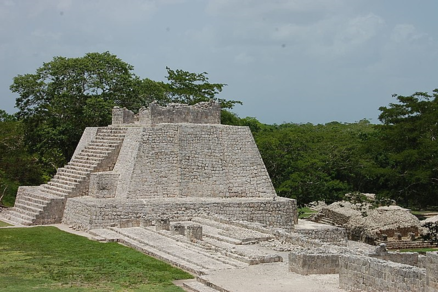 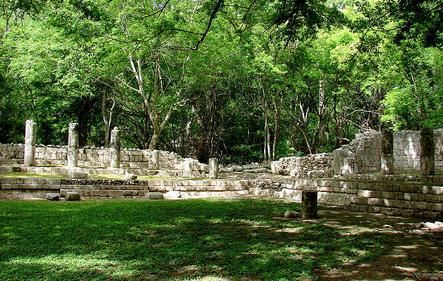 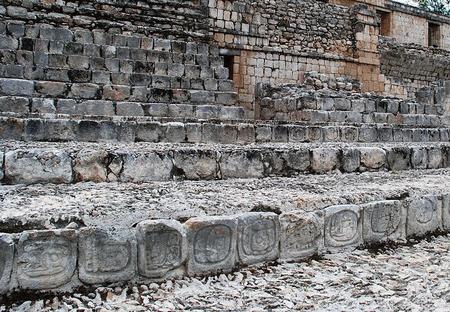 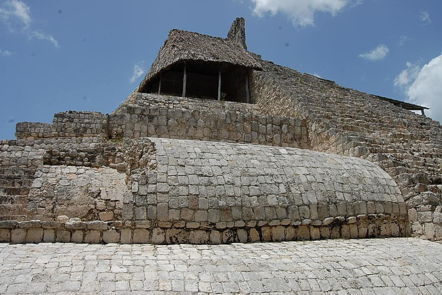 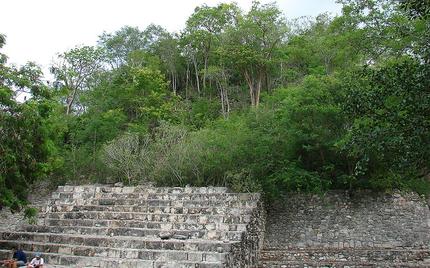 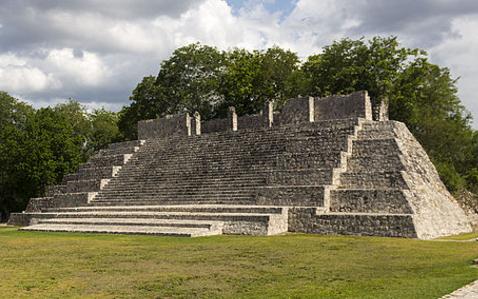 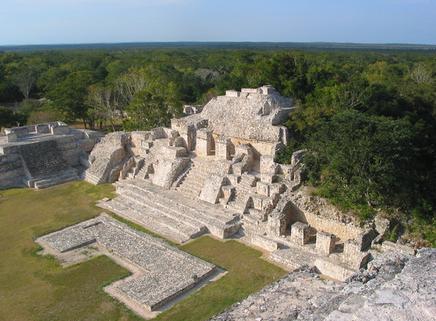 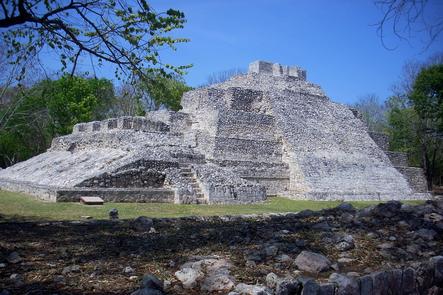 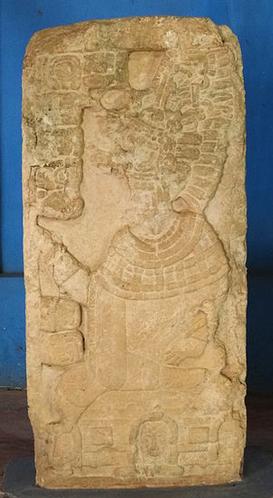 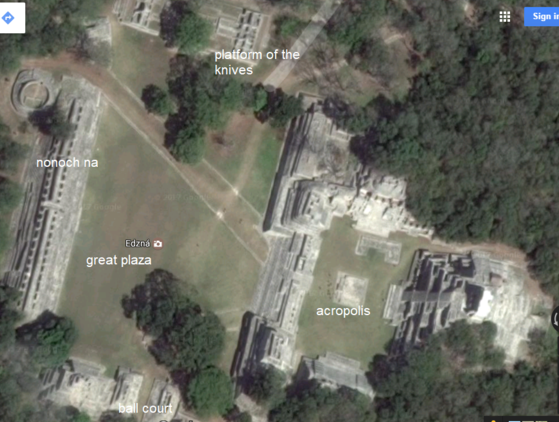 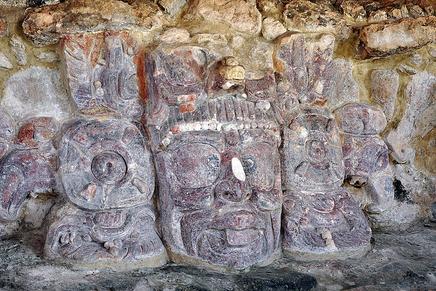 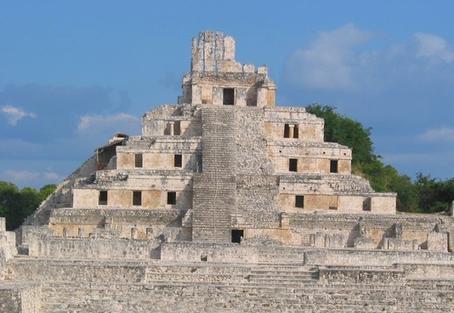 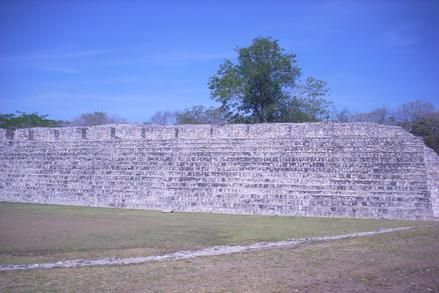 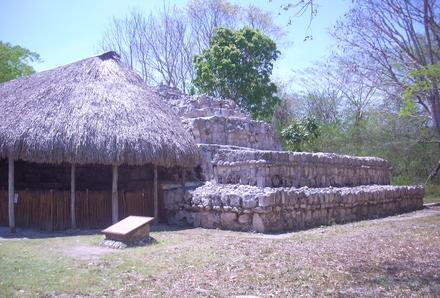 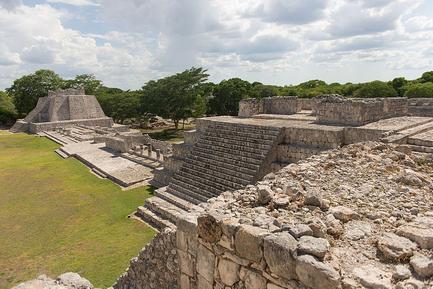 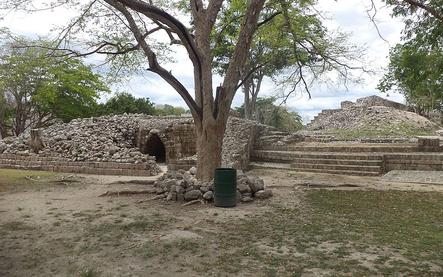 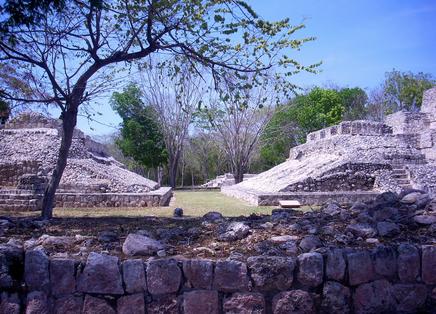 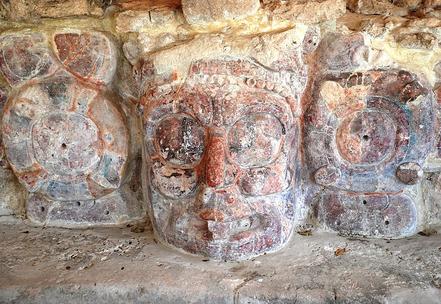 DESCRIPTION
Edzna, stylistically and visually, is a very impressive site. Located in a valley, its highest pyramid can be seen well before one enters the archaeological zone. The site is a mixture of a number of architectural styles spanning over 1500 years from 300 B.C. to 1200 A.D. It was an influential political and economic regional capital.

The site features 4 main complexes with numerous individual palaces, platforms and residential structures. A number of sacbeob (white stone roads), man-made irrigation canals, and reservoirs are located within the zone. Over 32 stelae (carved stone markers) have been discovered so far, as well as a rare hieroglyphic stairway. Recent research has identified a partial royal lineage and an emblem glyph for the site. It covers an area of about 15 sq. miles/25 sq. kms, though the core area is easily visited.

The site is located about 37 miles/60 kilometers east of Campeche. From Campeche travel east on Highway 261, then south on Highway 188 to the turn off for Edzna and Nohyaxche.

HISTORY AND EXPLORATION
Edzna, House of the Itzas, began as a simple settlement in the Middle Pre-Classic (700-300 B.C.).  Masonry structures in the Peten style begin to appear in the Late Pre Classic (300 B.C.-200 A.D). Puuc and Chenes style architecture appears by the 6th century as Edzna exerts its greatest political and economic power becoming a regional capital. It had extensive contact with important sites such as Calakmul, Tikal and Piedras Negras.  Construction and additions continued into the Post Classic (1100-1450 A.D.) though by this time its influence began to wane and it was abandoned by 1500 A.D.

Edzna was rediscovered in 1906, and was initially reported on in 1927 by Nazario Quintana Bello. The site was visited by Sylvanus Morley in the same year. Alberto Ruz Lhuillier and Raul Pavon Abreu of INAH conducted investigations in 1943. George Andrews compiled the first topographic map in 1967. Antonio Benavides Castillo has conducted a number of investigations since 1988. Excavation and restoration continue to date.

STRUCTURES
One enters the site through a plaza known as the Courtyard of the Ambassadors. This name was given to the plaza in recognition of the International effort to restore the site. The plaza consists of several structures, most of them on low-rise platforms with columned entryways to inner rooms. One of the structures has the remains of a nice corbeled vault that opens up on both sides and can be walked through.

Across from the plaza is an unusual two-tiered circular structure. There is a north facing stairway that leads up to a single entryway. Its purpose has not been determined, though it is  thought to have had an astronomical function. A similar structure appears at the site of Oxtankah on the east coast of the Yucatan.

A short path leads into the Grand Plaza proper. A huge structure known as the Nohoch Na commands the entire west side of the plaza. It is an extremely long platform nearly 400 feet/140 meters in length, and about 15 feet/5 meters in height. Running across the top of the platform are two continuous hallways containing 24 or so entryways. All that remains of this upper floor are partial remnants of the masonry pilasters.  This structure seems to have held a civic or administrative function and is nearly identical to the equally impressive Structure 44 seen at Dzibilchaltun.

Bordering the Great Plaza on the north is the Platform of the Knives and is so named for a group of flint knives that were discovered here. It is a long, low platform with stairways on all sides. At either end are the structural remains of vaulted rooms with columned entrances that lead into inner chambers. The middle section of the platform consists of foundations of other chambers. The west side of the platform faces the Courtyard of the Ambassadors.

The south side of the Great Plaza is bordered by a ball court and The South Temple. The South Temple is a five-tiered pyramidal structure with a Puuc style temple perched atop. A central stairway on both the north and south sides of the pyramid leads to the temple and dates from the Late Classic (600-900 A.D.). The ball court is oriented on a north/south axis. There are small stairways that lead to the top of the two parallel structures that once contained rooms.

Located behind the ball court to the south, and outside of the Grand Plaza, is The Temple of the Masks, and the Small Acropolis. The Temple of the Masks is named for the two stunning masks of the Sun God, Kinich Ahau, that flank a small set of steps that lead to a multi-tiered ruined structure. These masks are of a high quality and are very similar to ones seen at Cerros, Kohunlich and Acanceh. The masks are thought to represent the Sun at dawn and sunset and are bracketed by apparent astronomical elements.

The Small Acropolis is a complex consisting of a raised, square platform with four structures situated around an interior courtyard, with a stairway on the west facing the Temple of the Masks. This is the oldest complex at the site dating to 300 B.C. Many of the sites stelae (carved stone historical markers) were once located here dating to the 1st through 5th century, and since relocated for protection and preservation. The Temple of the Reliefs is located on the east side of the courtyard.

The Great Plaza itself is entered through a narrow passageway between two partially restored structures. The complex is built atop a massive 19 foot/6 meter high platform plaza that measures over 400 feet/140 meters square. The complex, like most Maya buildings, exhibits numerous construction phases.

The largest structure located at the Great Acropolis is on the east side of the plaza and is the imposing Temple of the 5 Storeys. This is an impressive five-tiered structure with numerous vaulted rooms and a towering roof comb. A broad, steep angled stairway leads up from the plaza to a small temple atop the west side of the structure. A smaller stairway on the southeast corner leads to the first level. A complex roof comb of 19 feet/6 meters crowns the temple.

There are 22 rooms that make up the Temple of the Five Storeys. An additional 5 rooms are incorporated into the temple that is situated on the summit of the structure.  In two of the rooms painted inscriptions have been discovered on interior stuccoed vault capstones. An Early Classic (200-600 A.D.) pyramid has been revealed beneath the final construction phase which dates to the Terminal Classic (900-1100 A.D.). The total height reaches over 110 feet/37 meters.

At the base of the central stairway are four risers that contain glyph blocks forming a rare hieroglyphic stairway known as Hieroglyphic Stairway 1. There are 86 blocks in all. Most were found buried under rubble at the base of the pyramid and have been reconstructed by archaeologists with a recovered date of 652 A.D. Other stairways are located on the north, and east sides of the structure.

An interesting architectural design is found on the north and east sides of the structure. This is a series of large curved sections of stonework that flank the stairways and was added on in the Terminal Classic (900-1100 A.D.). This rather unique design pattern may also be evident at the site of Ake.

In the center of the courtyard is a low platform known as the Solar Platform and is thought to have been used for astronomical and other ritual purposes. The southside of the plaza contains two structures, The Temple of the Moon, and the Southwest Temple.

The Temple of the Moon is a six-tiered truncated pyramid with a broad, central stairway. A long structure sits atop the summit with four columns providing entryways to interior chambers. The Southwest Temple anchors that corner of the plaza. It is a rather odd looking pyramidal structure built atop a low platform similar in design to structures seen at Mixco Viejo. A central stairway leads to the summit which contains several rooms. Its platform base extends down to the Grand Plaza level.

Across the plaza to the north is The North Temple which incorporates a mixture of architectural styles. It is built atop a small platform with a central stairway leading to a temple with three standing pilasters that provide entrances to a single room. The central stairway is flanked by two smaller stairways that may have extended to a ruined second story. It has the remains of a corbeled arch side room.

On the northwest corner of the plaza is a five-tiered truncated pyramid known as the Northwest Temple. A central stairway leads to the summit containing a three chambered structure. A side stairway leads down to a small enclosed courtyard known as the Puuc Courtyard which contains some smaller, platform structures.

A sacbe leads out to the northwest from the Great Plaza .5 miles/.8 kms to a small plaza containing several structures known as the Old Sorceress Group. This group dates to the Pre-Classic. The main structure is a partially restored low platform with a central stairway known as the Temple of the Witch. A single room is accessed via a double entryway.

There are other small structural groups and individual structures located throughout the site, some in a partially excavated state, others yet to be excavated.​ 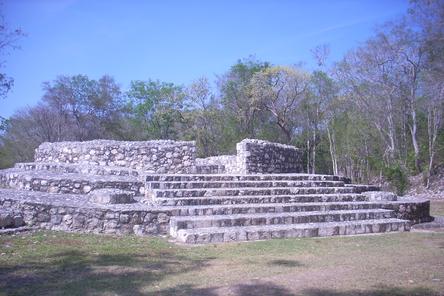