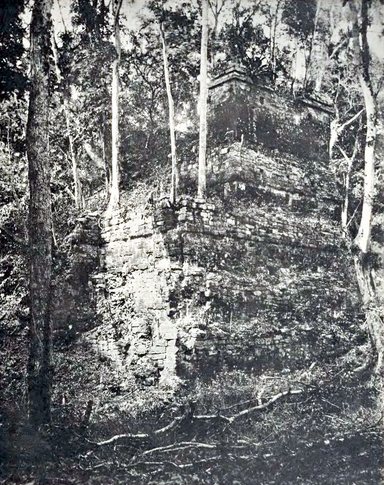 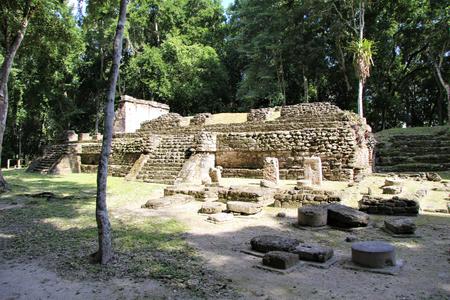 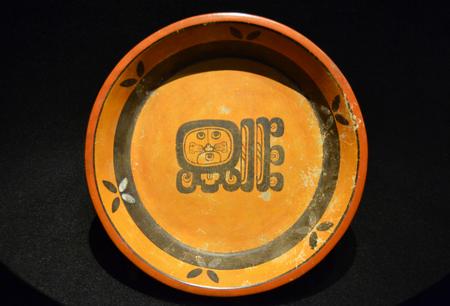 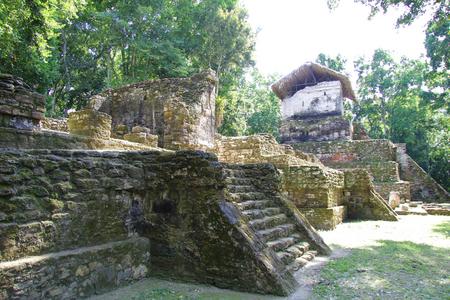 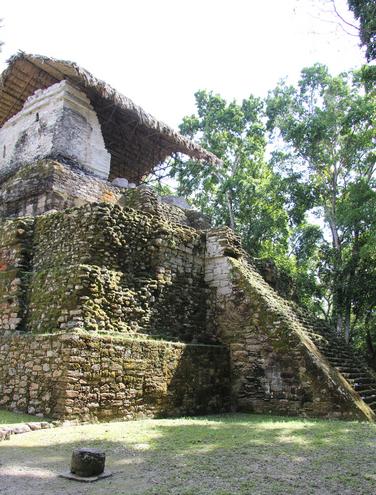 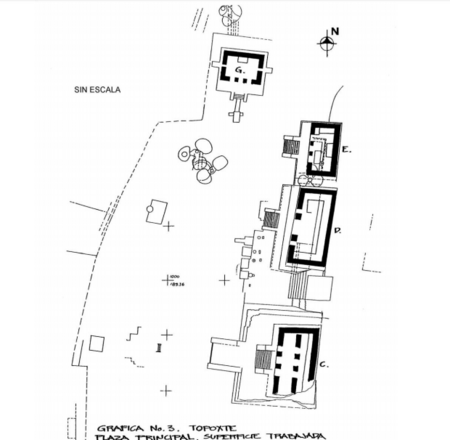 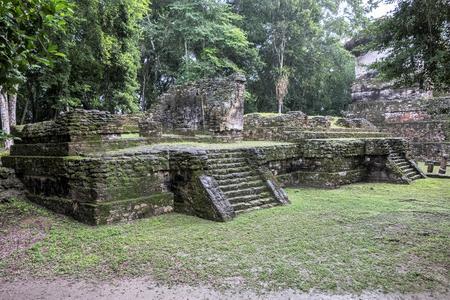 DESCRIPTION
Topoxte, seed of the Ramon Tree, is an archaeological zone spread across five islands in Lake Yaxha, and is part of the Yaxha-Nakum-Naranjo National Park. The original name of the site is unknown. The main ceremonial/civic center is located on Topoxte Island. It has an early settlement history, and was occupied into the Post Classic (1250-1525).

The site is located across the lake from the well-known site of Yaxha from which Topoxte is accessed.  A separate fee is required to cross the lake to the site. Yaxha lies just off highway CA 13 which runs between Flores and the Belize border. At the town of La Maquina, km 62, take the turnoff north for about 5 miles/8kms to the park entrance. Flores can easily be reached by car, bus and aircraft from both Guatemala City and Belize.

HISTORY AND EXPLORATION
Topoxte has an early settlement history dating back to the Middle Pre-Classic (700 B.C.-250 A.D.), making it older than Yaxha. At various times it politically and socially linked with Yaxha across the lake. There is evidence of Late Pre-classic trade with the Highlands of Guatemala. While a number of stelae have been located at the site, no reports of any legible, glyphic information are available to expand on its history.

However, a burial from Structure A, Burial 49, has been dated to 750 A.D., within the Classic Period. The contents of the burial reveal a marriage of a noble lady, Lady Twelve Guacamaya from Topoxte, with an elite noble from Tikal. During the Terminal Classic, and prior to the temporary abandonment of the site, the ceramic styles of Topoxte were similar to those of Tikal and Uaxactun. At this time, Topoxte was a part of the Yaxha polity and would seem to indicate a political relationship between the four sites.

The site experienced a hiatus at the end of the Classic Period, c.900 A.D. It was reoccupied in the Post Classic during which time the site reached its apogee becoming the main center of the Kowoj Maya sub-group. Ceramic evidence indicates a strong trade relationship with Mayapan in the Yucatan Peninsula during this time.

Topoxte survived as a viable settlement until c1450 A.D., about the same time Mayapan was abandoned, revealing an occupational history of over 2,000 years.

Topoxte was first reported on by Juan Galindo in 1831. A three day visit by Teobert Maler was made in 1904. He created a map of the main plaza, and photographed Structure C. Other researchers included Maurice de Perigny (1906), Silvanus Morley (1914), and Cyrus Lundell and L.C. Stuart (1933). William Bullard began formal investigations in 1958 and 1960 for the Peabody Museum of Archeology and Ethnology.

In 1973 and 1974 research was carried out by the Central Petén Historical Ecological Project sponsored by the Foundation for Latin American Anthropological Research. In 1987 the Tikal National Project began rescue activities that were continued by the Triángulo Project.  Further explorations and restorations were carried out by IDEAH and concluded in 1996.

STRUCTURES
Topoxte is spread over five islands with three of the islands displaying the greatest occupations; Topoxte, Cante and Paxte. Topoxte island is the largest, and contains the majority of monumental architecture. The island has a shape similar to a half -moon. A huge amount of fill was incorporated into the landscape raising the highest portion of the site to 32 feet/ 9 meters above the level of the lake. At certain times the level of the lake drops, and the island becomes accessible from land.

The entire island of Topoxte was built out and contains numerous plazas, courtyards, patios and terraces. The ceremonial center is arranged around a rectangular plaza, the Main Plaza, and contains the most important structures. The plaza is oriented on a north/south axis, a few degrees east of North, with the primary structures on the east side of the plaza. The west side is open to the lake.

Structure A is located just outside the Main Plaza on the south side, and dates from the Late Classic. It is a small temple set upon a low, three-tiered platform. The structure was partially dismantled during the Post Classic for new constructions. It is here that Tomb 49 was discovered under Structure A in 1994. It contained a rich assortment of Classic era grave goods including a rich selection of jade objects.

Structure B is a long, rectangular structure that occupies the south side of the Main Plaza. It is a low platform base that displays some pillars that at one time supported a roof of perishable materials.

Structure C is the principal structure of the site, and is considered to be among the best-preserved examples of Post Classic construction in the Peten region. It contains numerous construction phases from the Late Pre-Classic to the Post Classic, and is set upon a three-tiered platform base approximately 23 feet/7 meters in height. A west facing stairway of about 16 feet/ 5 meters in width leads up to the top of the platform. At the rear of the platform a second, smaller platform houses a two-chambered temple structure accessed by its own stairway. The entryway is divided by two, square pillars. The rear room contains a bench against the entire east wall, and the temple had a flat roof once supported by wood beams, now disintegrated.

The entire structure reaches a total height of 46 feet/14 meters. A number of burials have been discovered within the structure. The partial remains of a smooth stela, Stela 14, have been located in front of the temple stairway, and is associated with Burial 22, an offering of human bones. In front of the structure, in the middle of the plaza, is a circular altar and ceremonial/dance platform.

Structures D and E are adjacent to Structure C and complete the East side of the Main Plaza. They share a common base. Structure D has an off-center stairway, demonstrating later expansion, and leads to a ruined chamber that exhibits three entryways separated by two pillars. In front of this structure is a small platform that houses 6 plain stelae set in two rows. Circular altars accompany most of the stelae.

Structure E is very similar to Structure D though smaller, but better preserved. It exhibits two construction phases beginning around 1200 A.D. A carved, stone turtle was recovered from within the structure. The turtle was covered in stucco and painted blue, black and white, and featured a human head emerging from the turtle’s mouth. A Pre-classic offering was recovered from the front of the structure.

Structure G is a small, square shaped structure located on the north side of the plaza. It is set on a low platform base. A central plaza facing stairway leads to a single chamber, that is accessed between two pillars. A small bench is located against the rear wall. The structure once supported a flat roof, now disintegrated.

The majority of the remaining structures are either buried under vegetation or in a ruined condition. 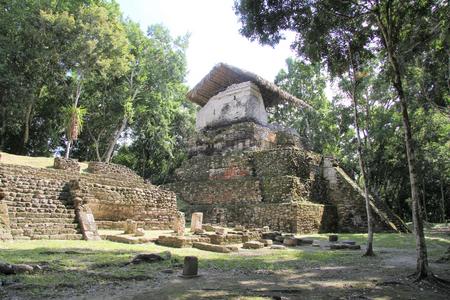 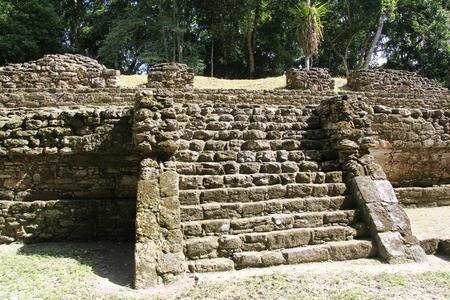 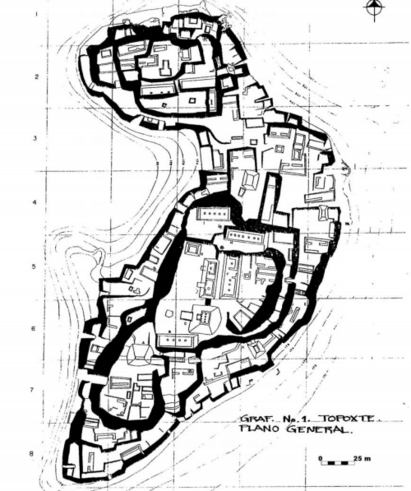 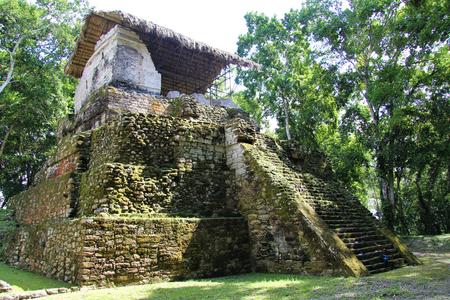 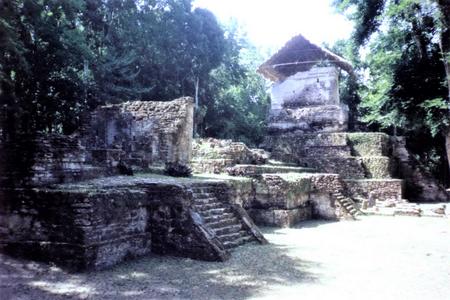 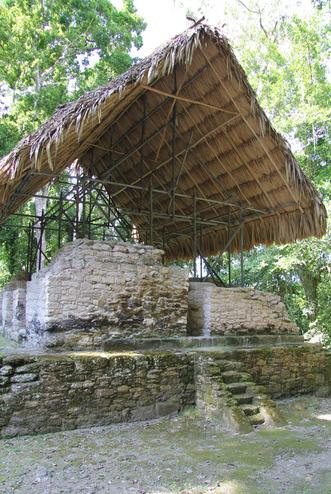 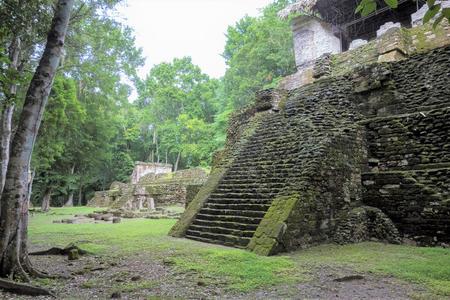 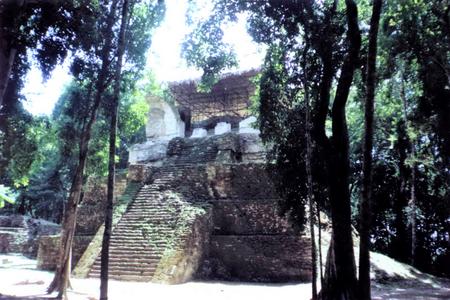