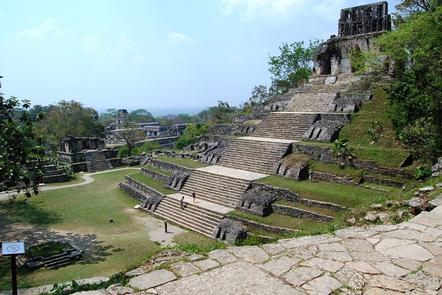 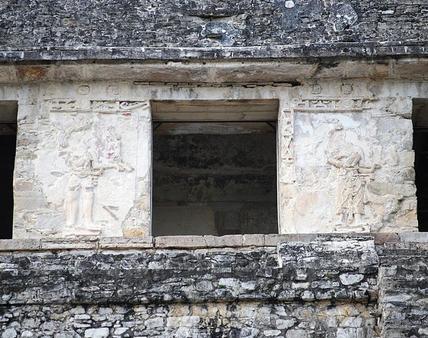 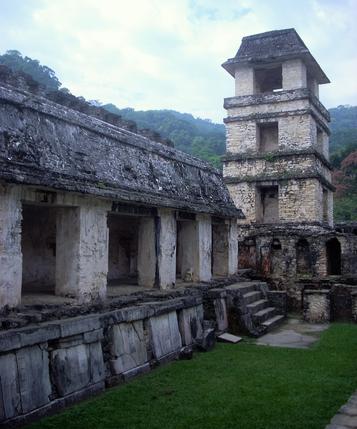 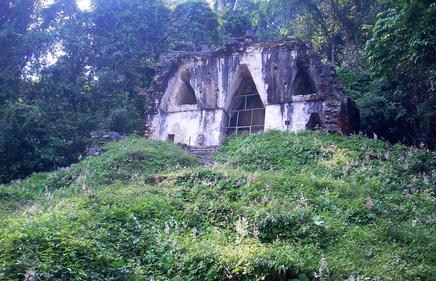 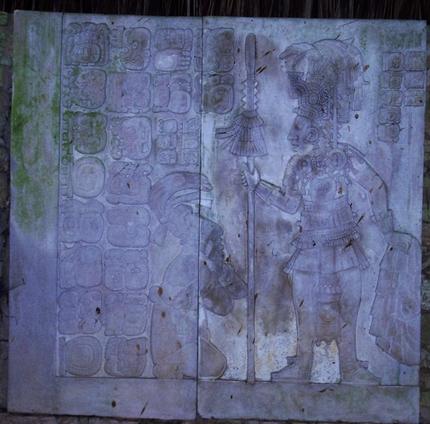 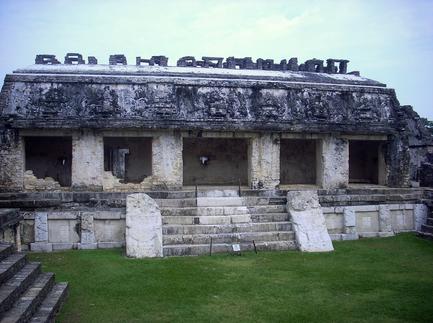 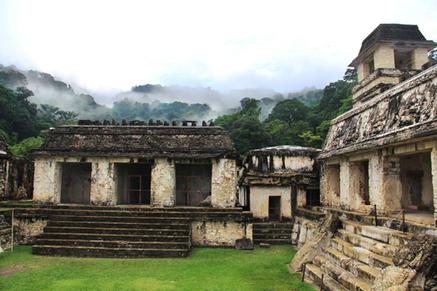 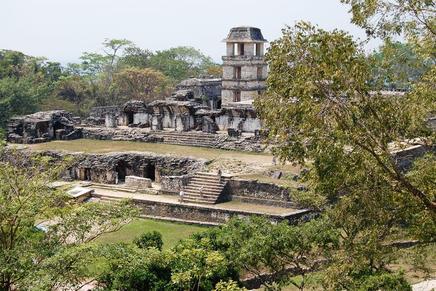 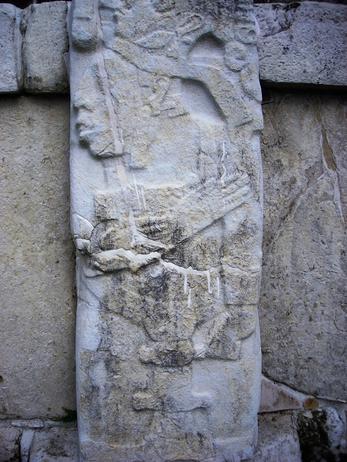 DESCRIPTION
Palenque, a UNESCO World Heritage Site, is considered by many to be the most beautiful of the ancient Maya cities. It is situated among low, fertile hills with streams and waterfalls running throughout. Its original Maya name was Lakam’ha which means” Place of many Waters”. There is also a city-state emblem glyph that reads Baak’ “bone”. The site encompasses a large area of over 1sq mile/2.5 sq km containing over 200 architectural structures with more than 30 identified groups, most of them residential. Only the core area, which in itself covers a lot of ground, is open to the public.

Palenque is one of the most studied of Mayan sites. A number of important discoveries concerning the decipherment of glyphic texts based on the numerous carved inscriptions found there have revealed a trove of information about the history of the site, as well as a better understanding of Maya culture in general. The royal lineage of the site has now been documented from the 5th through the 8th centuries with births, accessions to the throne, deaths, victories and defeats all gracefully inscribed in stone throughout the site.

Palenque is best known for the elaborately decorated tomb of Kinich Jaanab Pakal deep within the Temple of the Inscriptions. Unfortunately Pakal’s tomb is no longer accessible to visitors, in addition to a number of other structures at the site.

There are a number of advanced engineering principles to be found here including an aqueduct, channels, and at least one bridge.

Palenque is located in the Mexican State of Chiapas. It is about 93 miles/232 kms southeast of Villahermosa. From Villahermosa or Ciudad del Carmen use Highway 186 to the small town of Catazaja, where the turnoff on Highway 199 to Palenque is situated.

HISTORY AND EXPLORATION
Palenque’s settlement dates back to the Late Pre Classic (250 B.C.-200 A.D) as attested to by ceramic shards found at the site. Monumental construction begins by the Early Classic (200-600 A.D.) where the recorded history of Palenque begins with the earliest known king installed in 431 A.D. There followed from this a nearly uninterrupted succession of kings through the end of the eighth century.

Palenque, like all Maya city-states, was engaged in the business of constant political and economic rivalry with its neighbors forming alliances, making war, expanding its influence where possible, and contracting when experiencing defeat. It suffered a series of early defeats at the hand of the powerful Calakmul (Snake) kingdom which led to a period of decline and disorder. Around the year 612 A.D., Pakal I became ruler, but was soon succeeded by his daughter Sak Kuk. It was her son, Kinich Janaab Pakal (603-683 A.D.) who later became king and returned Palenque to prominence building it into a major political and economic power. He ruled for nearly 68 years, and it was under his reign that most of the monumental structures that are seen today were built.

After his death his sons ruled in succession and continued the construction projects started by their father. They also began new building projects of their own, and expanded other existing complexes. With the defeat of Palenque by the city-state of Tonina in 711 A.D. there began a slow decline until its abandonment in the early part of the ninth century.

Palenque was one of the earliest sites to merit attention by the Spanish authorities. A number of reports were made in the late 1700’s, most notably by Antonio del Rio who led a military expedition to the site in 1787. There followed visits by Juan Galindo, Jean Frederic Waldeck, and those intrepid explorers John Lloyd Stephens and Frederick Catherwood in 1840. It was their books, released soon thereafter, that have driven the public ever since to a better interest, appreciation and understanding of the Maya. A number of scholarly conferences, known as The Palenque Roundtable, have been held here which has greatly increased our knowledge about the Maya.

STRUCTURES
The largest and most impressive complex within the archaeological zone is that of the Palace, constituting part of the civic and ceremonial center located in the heart of the site. This multi-level complex consists of a number of structures, platforms and courtyards and is best known for its four story tower. The tower contains some Venus glyphs and may have been used for astronomical and ritual purposes.

The Palace Complex is built atop an immense low platform, and was expanded and remolded over the centuries. The main level has a number of courtyards, the most impressive of which features several bas relief carvings of prisoners once known as “The Dancers”, and called the Sunken Courtyard.  A glyphic passage here mentions a nobleman from Tabasco, and the death of a ruler from Pomona in 663 A.D.

There are many narrow corridors featuring corbeled arches that link the different sections of the complex, some of which lead downward into a series of underground passageways and chambers. One structure Sak Nuk Naah, House of the White Skin, contains the Oval Tablet. This tablet records the ascension of Pakal in 615 A.D.

The water system that runs through the city center and underneath the palace contains an advanced hydraulic engineering principle that enables water to reach to an upper level of the palace.

The Temple of the Inscriptions, one of three in a row, lies at a right angle to the Palace and is by far the most well-known of the structures at Palenque. It was here in 1952 that archaeologist Alberto Ruz L’Hillier made his startling discovery of a sealed passageway that led down from the top of the structure to ground level. After a few years of excavating the rubble from the passageway he came upon one of the most significant finds in the Western Hemisphere. It was the discovery of the elaborately carved sarcophagus of the great king Kinich Janaab Pakal. Inside the sarcophagus was the stunning, jade bedecked king himself.

The Temple itself rises to a height of over 75 feet/ 23 meters, and is wonderfully restored. There are a number of intricate stucco relief carvings on the pilasters that frame the entryways into the temple. It crowns a nine-tiered pyramid platform containing a total of 69 steps, the number of which may have an astronomical (lunar periods) or a ritual connotation. The nine tiers themselves may relate to the nine levels of the Maya Underworld.

Recently discovered about 25 feet under the tomb of Pakal is a stone lined water tunnel. It has been hypothesized that the once water-filled tunnel may have been constructed to transport the spirit of Pakal into the Underworld.

Next to the Temple of the Inscriptions is Temple XIII, also known as the Temple of the Red Queen. Her tomb was discovered in the 1990’s and is thought by some to be the wife or mother of Kinich Janaab Pakal. Her body was covered in cinnabar, a red mineral compound, hence her name. This temple is open to the public, and her empty tomb can be viewed.

Adjacent to the Temple of the Red Queen is the unimposing Temple XII, also known as the Temple of the Skull. There is a passageway leading down from the top to a tomb containing a sarcophagus of an unknown ruler. This temple is closed to the public.

Another important structural complex is known as the Cross Complex, or South Group. This complex consists of three main temples ringed around an open plaza and were constructed by a son of Kinich Janaab Pakal, Kinich Kan Balam II. They all depict Kan Balam II in different ritual contexts intricately carved into large stone panels at each temple. The complex is located southwest from the Palace across a small stream that runs through the city center.

The Temple of the Foliated Cross, though the smallest of the three, is the most photographed as it is framed by the jungle atop a small hill. The front portion of the corbeled vault has fallen away leaving only the rear intact. This is a common structural failure affecting many buildings throughout the Maya World. The Temple of the Sun is located directly across the plaza and is built on a small four tiered pyramid platform. It has a nice roof comb that lends an air of elegance. Next to this temple is a smaller structure known as Temple XIV.

Facing the west side of the plaza is the Temple of the Cross, the largest of the three. The temple sits atop a five tiered pyramid and is crowned with a beautiful roof comb. Inside the temple are two intricate, incised stone tablets, one featuring God L, the Smoking God. Yes, the Maya were smoking cigars a thousand years before good old Sir Walter Raleigh came on the scene.

To the north of the Palace is a large complex which contains the Ball Court, the North Group, and the Temple of the Count. The Temple of the Count is the most notable, built atop a five tiered pyramid platform and containing a tomb of an unknown member of royalty. It is named after a 19th century explorer, Frederick Waldek.

There are many scenic paths that weave through the site across streams, through tropical jungle, and along waterfalls. There are also a number of other temples, platforms, elite residences, and pyramids located throughout the site. Some of these can only be visited by hiring INAH guides.​ A very charming site. 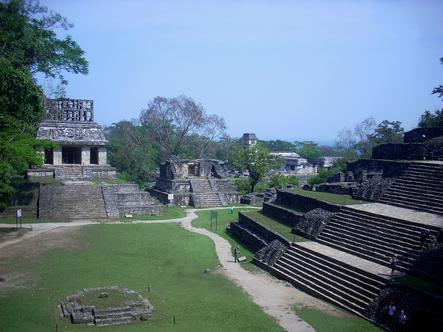 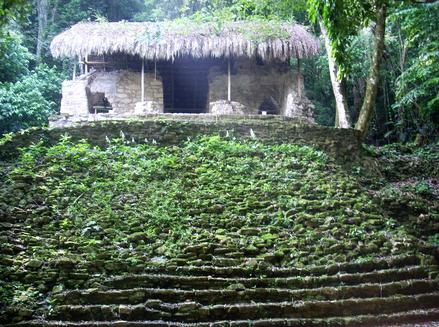 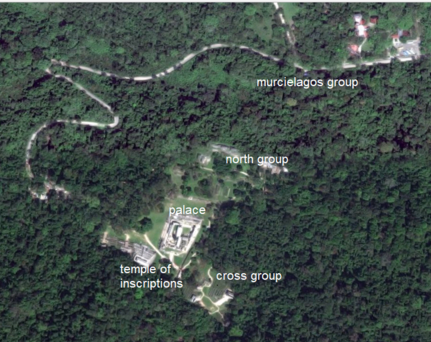 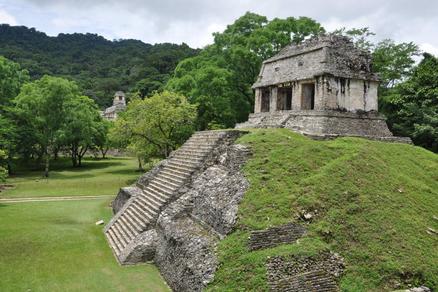 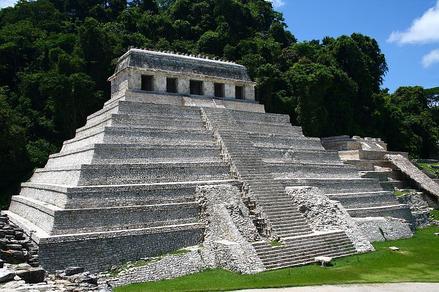