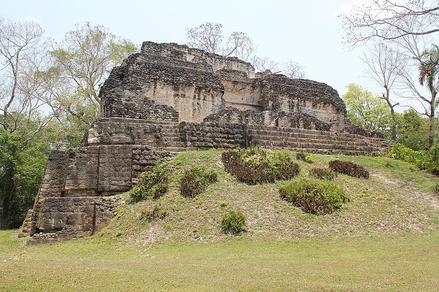 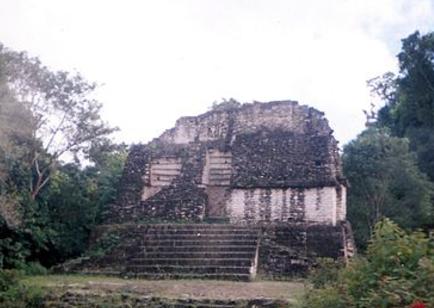 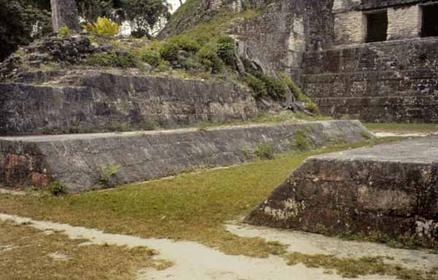 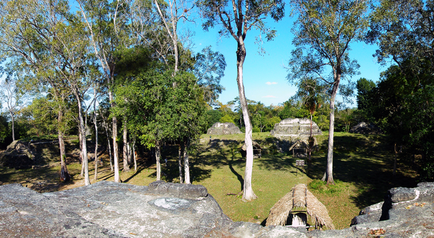 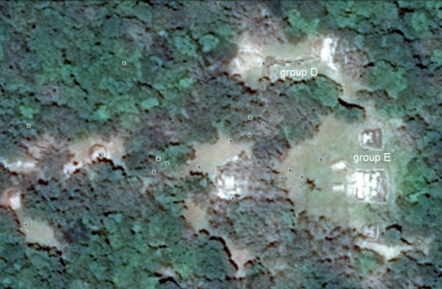 DESCRIPTION
Uaxactun, “Eight Stones”, is an important Middle Pre-Classic (800-300 B.C.) archaeological zone located north of the city/state of Tikal.  This was one of the earliest sites to be professionally investigated and reported on. Much of the archaeological terminology regarding the Maya World was first introduced at this site. Its ancient name may have been Si’aan K’aan, “Born in Heaven”.

Astronomical complexes were first identified at Uaxactun, and are identified throughout Mesoamerica as “E Groups”. The formal placement of these structures allowed the Maya to observe astronomical events such as the solstices and equinoxes, which in turn help to determine agricultural, seasonal, and ritual events.

There is a modern village and an old airstrip that are located among the ruins. The air strip divides the site into eastern and western sectors, and the whole site consists of 6 main groups.

Uaxactun is located deep in the Peten tropical rain forest within the Maya Biosphere Reserve. It is most easily reached by flying into Flores, an island city in Lake Peten Itza. From there it is about 40 miles/64 km to Tikal, and then another 13 miles/20kms to the site. Modern Flores, ancient Tayasal, was the last independent Maya Kingdom to hold out against the Spanish onslaught which finally fell in 1697.Travel to the site can also be made by road west from Belize, or north from Guatemala City.

HOURS: 8 A.M – 4 P.M.
ENTRANCE FEE: U.S. $20/ 150Q for entrance into Tikal National Park
GUIDES: Can be obtained at Flores and Tikal
SERVICES: Bathrooms
ON-SITE MUSEUM: There is a small museum in the adjoining village of the same name
ACCOMMODATIONS: Food and Lodging can be found in the village of Uaxactun, Tikal or Flores
GPS: 17d 23' 28" N, 89d 37' 47" W
MISC:

HISTORY AND EXPLORATION
Uaxactun traces its settlement back to the Middle Pre Classic and was continuously inhabited until the end of the Late Classic (600-1000 A.D.). Stone architecture began appearing at the end of the Late Pre Classic (300 B.C.-200 A.D.) mirroring the development of nearby Tikal. Both these sites were dwarfed by the great city/state of El Mirador whose influence extended throughout the Peten. Little has been published on the earlier rulers.

With the demise of El Mirador at the start of the Early Classic (200-600 A.D.), Uaxactun began to expand both architecturally and politically, though it never reached the grandeur shown at Tikal. Due to its proximity to Tikal, these two cities were in constant competition.

In 378 A.D. the dynastic rule at Tikal was altered by the arrival of Siyaj K’ahk,”Fire is Born”, a royal warrior from Teotihuacan. He assumed control of both Uaxactun and Tikal, and proclaimed himself king. This began a dynastic succession of kings who greatly expanded the city and its fortunes.

Tikal suffered a crushing defeat by Calakmul in 562 A.D., and this had a negative effect on Uaxactun. Little building activity or stela dedications were noted between 554 and 711 A.D.

After this hiatus the city began a resurgence with restoration and expansion of its structures. By the end of the 9th century the general area-wide decline of the Maya reached the city with the last recorded inscription dated to 889 A.D. This monument records a Katun ending ceremony (10.3.0.0.0./May 2, 889 A.D.) and was erected by the last king, K’al Chik’in Chakte, with the king of Tikal, Hasaw Chan K’awiil II, in attendance. The city was abandoned not long thereafter.

The modern record and exploration of the Uaxactun begins with Sylvanus Morley who rediscovered the site in 1916. This was one of the first sites to be systematically explored, studied and excavated. In the 1920’s the Carnegie Institute identified the purpose of a group of structures in an area known as Group E as an observatory. This led to the further identification of similar structures at other sites as having an astronomical basis in design as well.

Early excavations carried out at the site revealed extraordinary Late Pre Classic sculpture, masks, and decorations which changed the understanding of this time period. The identification and study of ceramic styles has led to an understanding and dating sequence that has been used at other sites. Subsequent excavations and restorations have continued since.

STRUCTURES
The old air strip, now an open space, divides the site into two distinct zones. Groups A-C are located to the west of the airstrip, while Groups E-F and H are found to the east. There are impressive Pre Classic structures underlying a number of buildings in Groups A, E, and H.

The oldest group is Group E. This area dates back to the Pre Classic, around 600 B.C., with continued building and expansion through the Early Classic. Temple E-VII-B was found with a decorated platform and large stucco masks. It is a flat topped pyramid with stairways on all four sides. Similar structures from the same time period appear at Group H in Uaxactun, at El Mirador, and at Lamanai and Cerros in Belize. These consist of large stucco masks flanking the stairways of the terraces of the structures, and represent mythological gods with astronomical associations.

This Temple fronts the west side of a plaza. Directly across is a platform with a triadic arrangement of pyramidal structures that align to the solstices and equinoxes when viewed from Temple VII-B. Two small complexes fill out the plaza, with the south complex hosting 3 small temples on a raised platform.

Group H, another Pre Classic group, is located to the east of Group E. It consists of two plazas oriented on a north/south axis. The South Plaza contains some fabulous early structures that had been buried beneath later construction, and featuring large stucco masks and decorative facades.

This complex contains six temples built atop a small acropolis. Structure H-Sub-3 (east side), is a three tiered temple that has large stucco decorations of the Witz (mountain) Monster flanking a central stairway to an upper level. On the north side of the acropolis is a small platform containing a triadic arrangement of three small pyramidal structures. Group H was buried and abandoned in the second century A.D.

Group A, on the west side of the airstrip, is the largest group of structures at the site. The buildings that are seen today are mostly from the Classic period (200-900 A.D), and are clustered around the Main Plaza.

The Main Plaza has a number of interesting stelae located here including the oldest, dated to 328 A.D.  The Acropolis fronts the plaza and consists of several structures. It was a mortuary and the administrative heart of the city.

A broad sacbe (white stone road) leads north to Group B. The only discovered ball court at the site is located here. A palace structure here once contained a multi-colored mural since destroyed. ​ 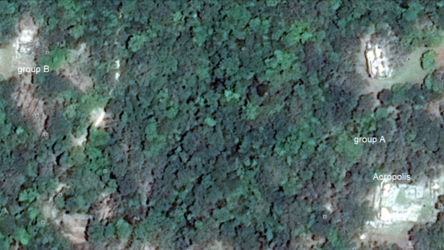 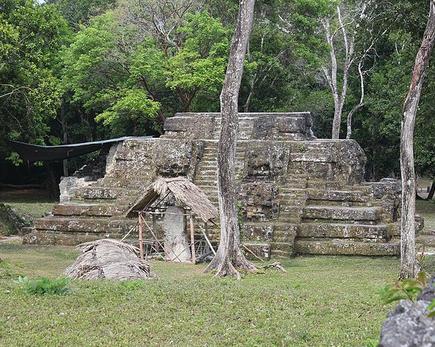 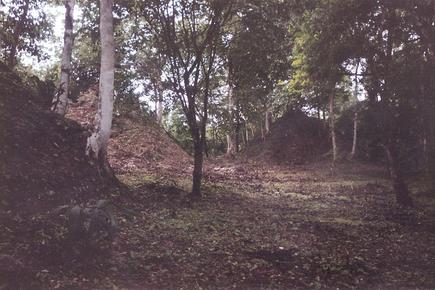