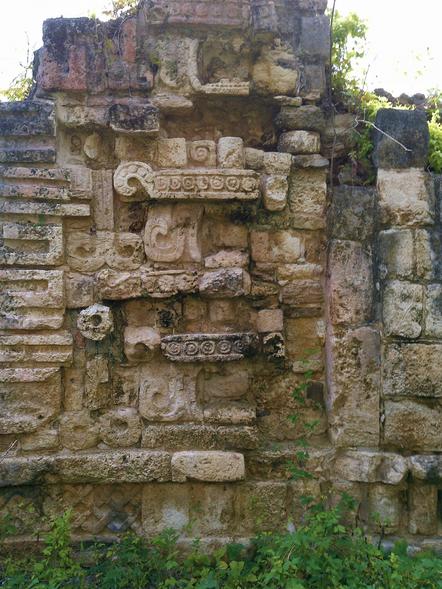 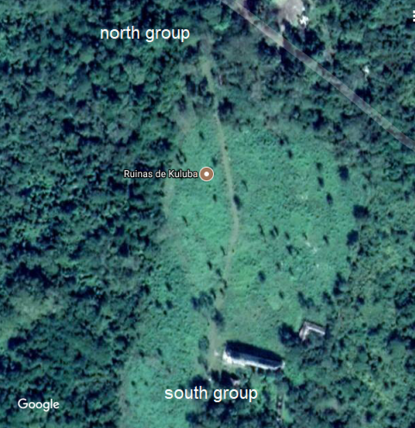 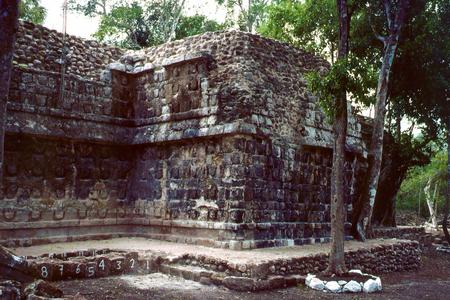 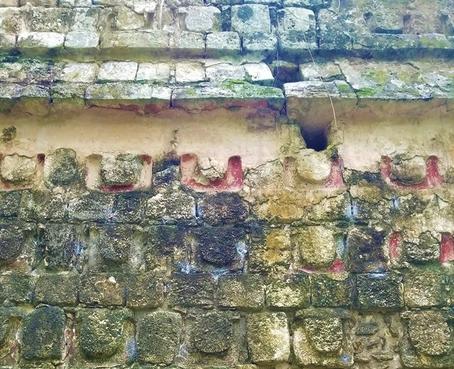 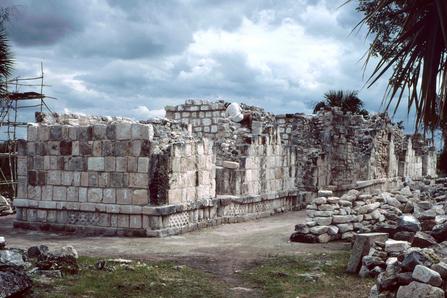 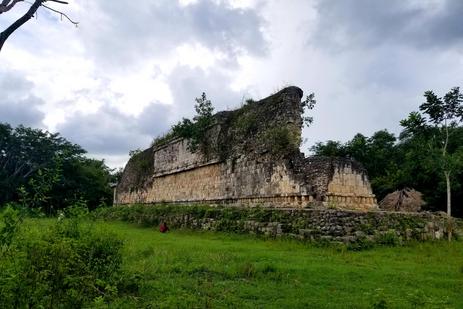 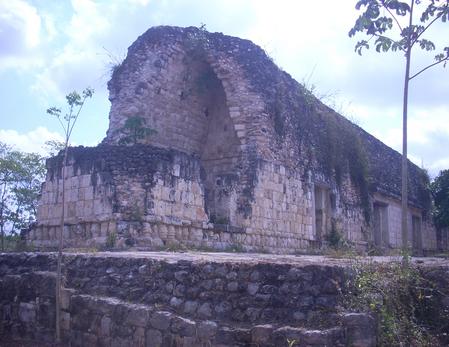 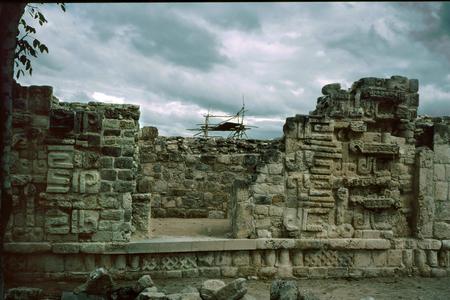 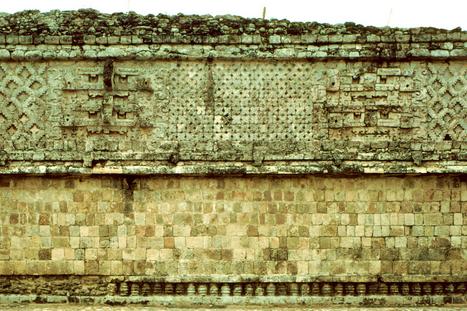 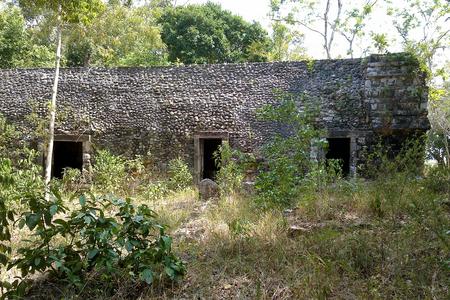 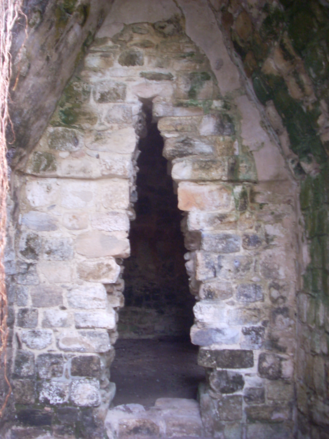 ​KULUBA/CULUBA-Yucatan, Mexico
​
DESCRIPTION
Kuluba is a Mayan archaeological zone located in northern Yucatan State. The structures as seen today date from the Late Classic (600-900 A.D.), and are set among a few meandering cow paths. It has had some nice restoration efforts, but is now slowly being overtaken by the low sub-tropical forest. The site is locally promoted though it has no official INAH presence.

The site is reached off Highway 15 midway between Tizimin and Colonia Yucatan. Look for signage and take the paved side road south towards Tixcancal and Chan Cenote. Continue for about 5.7 miles/9.2 kms passing through the small village of San Pedro. Make a left onto an unpaved road for another 1.2 miles/2kms to a small rancho, E. Manuel, on the north side of the road.

Before reaching the rancho you will literally pass the front door of an old hacienda building. Wave “Hi” to the kids and watch out for sleeping dogs. You will notice some of the ruins on the right-hand side just prior to arriving at the rancho. There is usually someone near the gate to let you in to park your car. A small palapa contains some nice architectural elements from the site including a  beautiful tenoned serpent head. You can only visit the ruins with a guide from the property owner. The total distance from Valladolid is about 31 miles/52 kms.

HOURS: no set hours, but figure around 8A.M-4P.M.
ENTRANCE FEE: there is a small entry fee and guide service fee
GUIDES: required
SERVICES: none
ON-SITE MUSEUM: No
ACCOMODATIONS: Tizimin is the nearest town; day trip from Valladolid or Merida
GPS: 21d 06’ 54.48” N, 87d 50’ 46.32” W
MISC: Bring your own food and drink

HISTORY AND EXPLORATIONS
Ceramic evidence attests to an early occupation back to the Late Pre-Classic/Early Classic (300 B.C-250 A.D.), though no structures have been discovered. No stelae have been recovered to provide information regarding the history of Kuluba’s rulers or of its economic/political associations with other sites. The standing structures are from the Late Classic Period (600-900 A.D.). They show a strong Puuc influence, c.800 A.D., having small drum colonettes, and zig-zag stone mosaic decorations. Two structures and a cache found in Group C have architectural and artistic similarities to Chichen Itza. There have also been suggestions of a political/economic link to Ek Balam. The site was abandoned at the end of the Terminal Classic (900-1100) A.D., though it later became a pilgrimage destination.

It has been determined that cocoa production was carried on at the site. The cacao trees were grown in the Yucatan within aguadas, natural pits, that protected them from the elements. This was an important crop for the Maya. It was made into a chocolate beverage used by the elite, and the seeds were used as a form of currency. This form of currency persisted well into the 1800’s. In Nicaragua, the cacao currency was only officially demonetized in the 1880’s, and I have heard reports of its use in the early 1900’s.

While Kuluba was certainly known to the local population, it wasn’t until 1941 that E. Wyllys Andrews IV visited and first reported on the site. The next investigation was carried out in 1970 by students from the University of Yucatan. E. Wyllys Andrews V conducted field work in 1973. INAH began consolidations and restorations during a major project in 1980 carried out by Ricardo Velazquez Valadez. Alfredo Barrera Rubio of INAH led investigations and consolidations in 2001. Recent investigations in 2019 have been carried out by Alfredo Barrera, also of INAH.

STRUCTURES
There are three main groups; Groups A- C. Groups A and B are currently open to the public. Both of these groups are oriented a few degrees east of north. They have a similar layout with the principal structure on the north side of the plaza, and a grouping of structures on the east side of the plaza. A single structure is on the south side of the plaza. For the most part, site maps show the west side open. Group C for the moment is closed to visitors. It is the largest of the three groups. There are other small groups and individual structures located within the site.

Group B is formed around a central plaza. The most notable structure here is a wonderfully preserved Palace, identified in this report as Structure B-1. It has a mostly intact, very high vaulted ceiling and is set upon the north leg of a raised “L” shaped platform. It is a long structure that runs about 154 feet/47 meters on an east/west axis. It has 6 rooms with only the east and west rooms collapsed. The chambers have benches which would indicate a residential function. The upper façade of the front of the structure has fallen away revealing the interior rubble core. The rear of the structure features a beautiful upper façade of stacked Chac masks separated by decorative bands of stone mosaics. An impressive roof decoration was removed during restoration work and is now kept under a protective thatched canopy. A wide set of steps leads down into the plaza from the Palace terrace.

Adjacent to the Palace on the east side of the plaza is Structure B-2, perhaps of a civic/administrative nature. It contains 5 rooms that open up onto the plaza. There are 2 mask panels that adorn the lower portion of the wall facing the plaza. A terrace is in front of the structure that extends to a set of ruined steps that descend to the plaza level. The rest of the platform extends to the south and contains the remains of other structures. This area is heavily overgrown. Further to the southeast and then southwest are two small groups that contain a few mounds.

Group A is located to the northwest of Group B at a distance of about 800 feet/245 meters, back towards the rancho. It is centered around a small plaza. The main structure here is a well-proportioned 6 room palace structure, Structure A1, also known as the Palace of the “U’s”, so named after its decorative rear façade. While the upper façade of the front of the structure has mostly fallen away, there are the remains of a mask on the lower wall section.

The Palace lies on the north end of the plaza, and is set upon a platform with a small terrace in front. It has 5 south-facing entrances, and like the Palace in Group B it runs on an east/west axis. The two west and the two east rooms are interconnected length wise. The central entrance leads back to a second room, the whole structure forming a truncated “T”. All the rooms exhibit benches. A set of steps leads down to the plaza. This structure is a good study on Puuc style construction techniques.

Behind the Palace is a small courtyard surrounded by low platforms. Here I was warned off by my guide as I was coming to close to a killer bee nest. It was the second time coming across these nasty buggers. The other time was on the Coba-Yaxuna Sacbe.

The east side of the plaza is taken up by a long civic/administrative type structure, here called Structure A-2. It shares the same platform, and retains some low foundation walls with the remains of 8 columns which would indicate it once had a roof of perishable materials. A central stairway leads down into the plaza. The possible remains of a west stairway are also noted.

On the west side of the plaza there appears to be some vestiges of stone work though this whole area is heavily overgrown and it is difficult to determine what if anything there might have been.

Behind and to the south of structure A-2 site maps indicate a large, low platform with a west facing stairway. This platform contains a dozen or so low mounds, none of which were visible through the undergrowth. Other small mound groups are shown to the south. Off to the southwest are a few, small mound-covered structures.

Group C is currently closed to visitors. This group is the largest group at the site. It has over 20 structures that ring a central plaza. A platform is located in the center of the plaza. Most of these structures, including three small pyramids, are in an overgrown state. One structure on the east side of the plaza, Structure C-15, has been partially restored.

In Dec 2019 INAH investigator Alfredo Barrera announced the excavation of a palace structure to the east of Group C, and is the largest structure by volume at the site. It has a height of 20 feet/6 meters, and a base of 179 feet/ 55 meters by 49 feet/15 meters. Investigations are ongoing. Looks like it’s time for a return visit!

It is reported that to the west across the main road is a site with three structures known as Bolonchen. Some standing structures were observed in the distance atop a low ridgeline and may be those reported. It is on private property and will be an investigation for a later time. 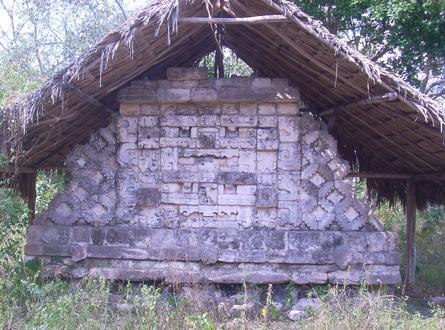 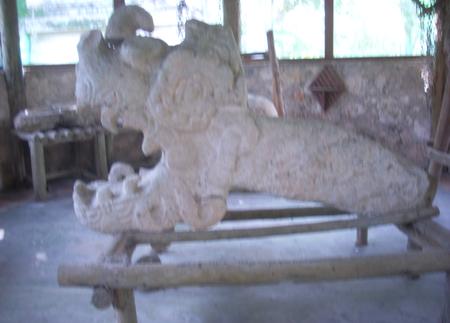 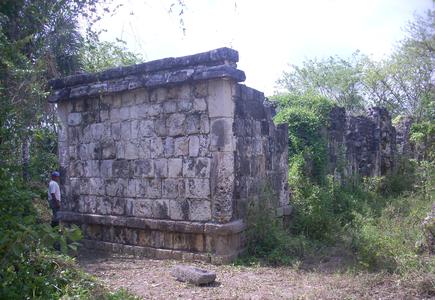