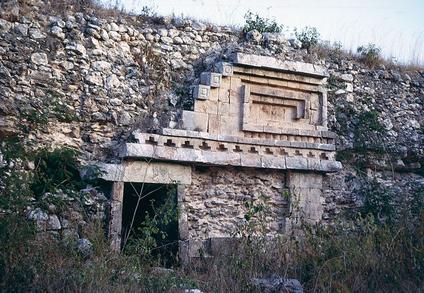 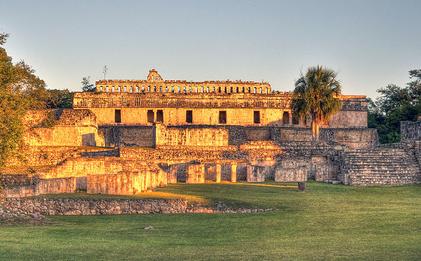 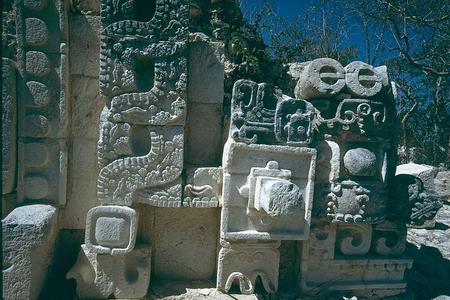 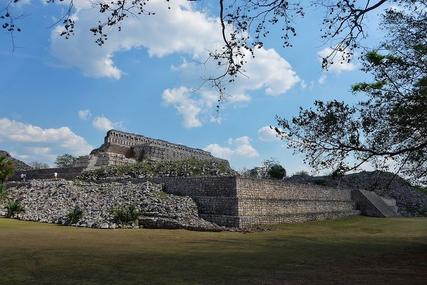 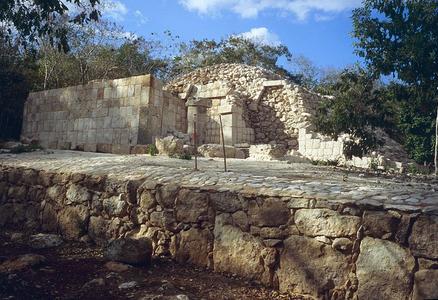 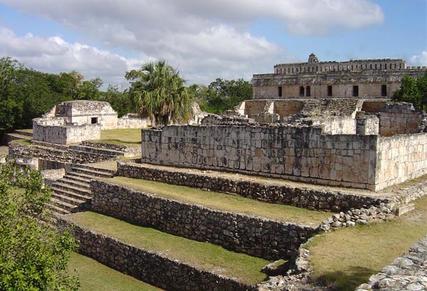 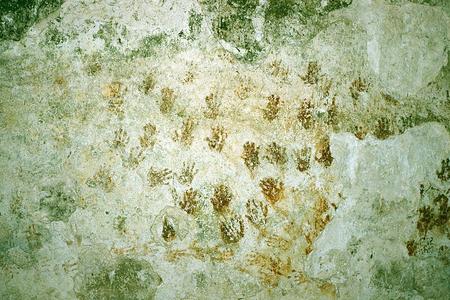 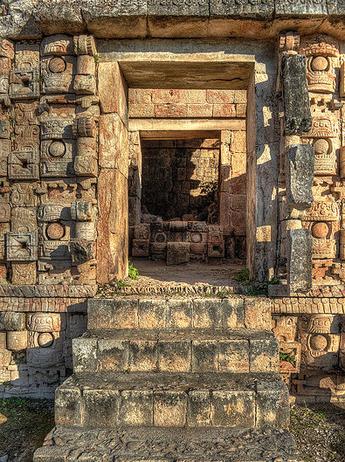 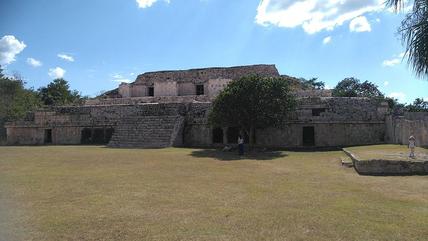 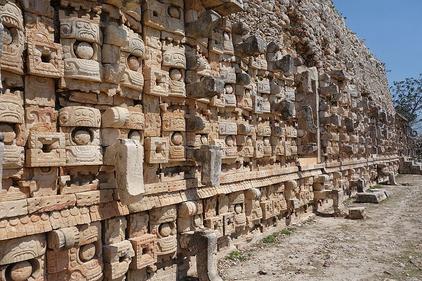 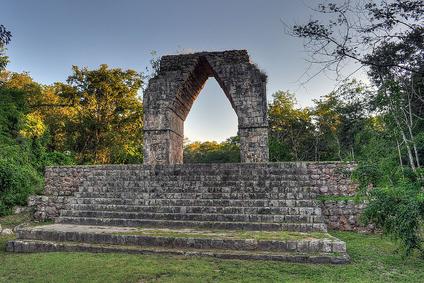 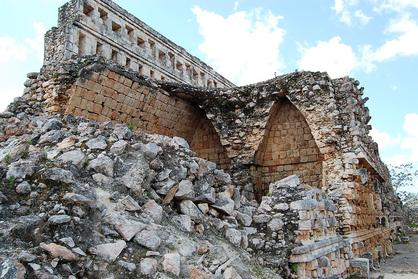 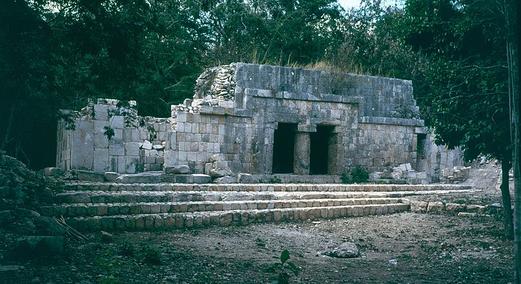 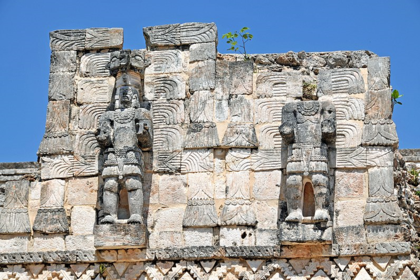 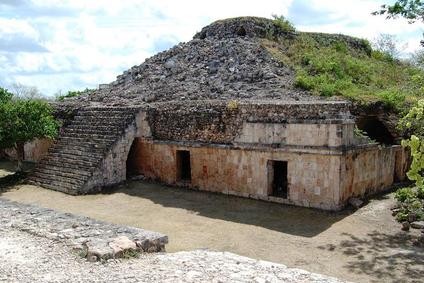 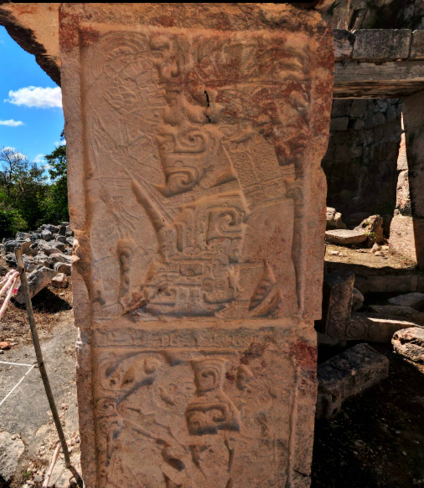 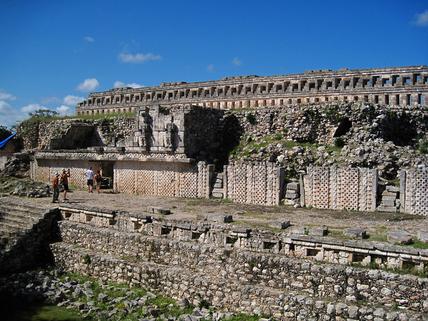 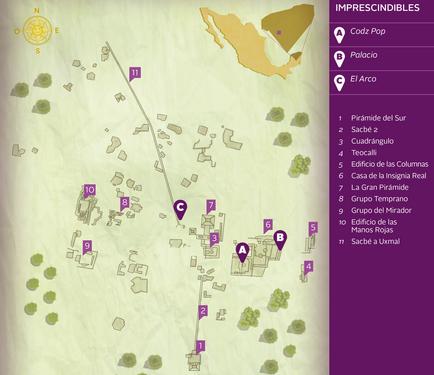 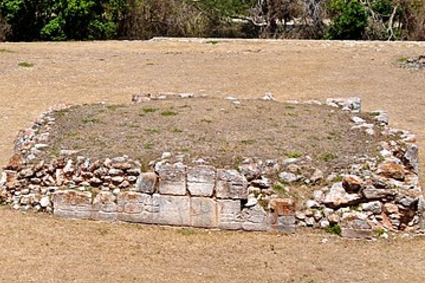 DESCRIPTION
​Kabah is an important Maya archaeological zone located in the western Yucatan along both sides of Highway 261, and south of Merida along the “Puuc Route”. It is the second largest ruin site in the area after Uxmal. This site is one of a series of Maya ruins that can be found in the general area and with an architectural style named after the arid hill country in which they are located. Others are Uxmal, Sayil, and Xlapak.

The superb stone workmanship of the Puuc sites is inspiring. This includes finely crafted veneer stones, and intricately carved stone mosaics. Sculptured statues found at Kabah are exceptionally rendered, nearly in the round.

There are no cenotes in the area, therefore water was of a particular concern. Water catchment systems were incorporated into many of the structures and plazas, and aguadas (natural depressions) were lined with stucco to act as reservoirs.

A well-known 11 mile/18 km sacbe (raised white stone road) leads out from the northwest portion of the site passing by the little-known site of Nohpat before ending at Uxmal. This sacbe was part of a wide-ranging system of interconnecting causeways found throughout the Northern Yucatan. These causeways, an engineering marvel, are finally receiving the attention they deserve. See my report on one such causeway; the 62 mile/100km Coba/Yaxuna Sacbe found on this website.

HISTORY AND EXPLORATION
Excavations have revealed an early settlement history of Kabah dating back to the Middle Pre-Classic (600-300 B.C.). The buildings that one sees today date from the Classic Maya era (600-900 A.D.) and are termed Puuc style, with some characteristics of contemporary Chenes architectural elements. The earliest recorded date located so far is 879 A.D. found on a door jamb in the East Group. Unfortunately, many of the sites door jambs, sculptured panels and lintels containing glyphic information have been removed to museums.

There is little reported public information on the sites rulers and political/economic relations, though images of four separate rulers have been identified on sculptured panels within the site. It is supposed that Kabah was under the influence of its larger cousin Uxmal.

STRUCTURES
​There are several plaza groups that contain the major constructions. Numerous smaller structures are located throughout the site, mostly as unrestored mounds. The main plaza groups are: the West Group; the Northwest Group; the Early Group; the Central Group and the East Group. In addition, several tombs have been discovered within the site.

The most imposing structure seen today is the Codz Poop or Palace of the Masks. It is the first structural group encountered upon entering the site and is located in the southern area of the East Group, and part of the Codz Poop Complex.

This Complex is constructed atop a huge, three-tiered platform (+/- 339ft/103m x 107ft/32m). A west facing stairway leads up to a large plaza. On the south side of the plaza is an unrestored step pyramid temple having several ruined summit chambers. It is accessed via a central plaza stairway. A small, ruined structure is located on the north side of the plaza.

The principle structure is the Codz Poop Palace itself. This amazing palace at over 170ft/55m in length contains on its western façade over 250 Chaac rain god masks. Each mask is composed of 30 carefully carved mosaic stones. An incredible, labor intensive undertaking and an awe-inspiring sight. These masks are executed in a style known as Chenes. This side of the palace has five double-vaulted chambers each entered through a single doorway. There is a single chamber on both the north and south sides of the structure. The Palace sits upon its own three-tiered platform facing the large, raised plaza in front of it. A grand stairway leads from the plaza level up ​to the Palace. Topping it all off is a high, decorative roof comb which gives the impression of even greater height and grandeur.  A stunning site in the sunlight.

In the aforementioned plaza is found the Hieroglyphic Altar. This has now been recognized as a low platform structure with at least one stairway on its west side, and may have had stairs on one or more of the other sides. Its importance lies in the numerous glyph blocks that are incorporated into its sides.

There have been about 144 stone blocks so far recorded that incorporate glyphic information. A 1950’s restoration reset 54 of the blocks back into the platform. The rest are placed nearby awaiting their turn. While the original reading order and full decipherment of the complete text is unclear, a degree of information has been determined. This includes glyphs regarding royal authority with possible date ascensions, ritual activity, and possible military victories. The style of the texts indicates a number of artisans were employed in its rendering.

The plaza also contains a water catchment system constructed below the plaza surface. It has been restored, and today provides the site with its only water supply.

The east side of the Codz Poop Palace has a wonderful façade featuring intricate mosaic designs, with pedestals set into the upper medial molding. These pedestals once supported several wonderfully sculptured statues. Two of these original sculptured statues have been restored and returned to their proper place. They are very detailed, larger than life renderings of warriors and rulers of the site.

A number of the associated chambers on this side of the Codz Poop contain well-carved door jambs that feature rulers, captives and glyphic information. An inscribed date of 987 A.D has been located on one of the jambs and is the latest known carved date in the northern Yucatan.

This east side of the Codz Poop platform plaza melds into the southern portion of the Palace Group. This group is centered around a large, raised plaza and contains several structures. It is accessed from the west from a lower platform containing some partially restored structures on its north and east sides.

A large structure on the south side of the plaza is known as Teocalli. The front portion of the structure has been restored.  The ground floor has a number of chambers accessed through simple doorways. A plaza stairway leads to a second story containing several portal vault chambers. Another stairway exists on the west side. This side also has a few restored chambers as well as some located on the south side of the structure.

There are partially restored structures that take up the southwest, northwest and north part of the plaza. The north structure contains several rooms, one of them a vaulted chamber. An platform with a standing stela, and a chultun (storage well) are in the center of the plaza.

The main structure here is known as the Palace, and is located on the east side of the plaza. This is an impressive, two-story structure with the remains of a two level, open roof comb. A flying stairway containing an interior plaza level passageway leads to the second story which has nine chambers. These are arranged in a very nice symmetrical order, some with columned entrances. The plaza level has several, mostly unrestored vaulted chambers. All these Puuc style structures are just simply inspiring to behold.

Just to the north of the Palace Plaza, and at ground level are a number of structures. This complex is called The Cocina Real, and was an area devoted to the preparation of food.

About 327 ft/100 m to the east of the Palace Plaza are two individual structures. The one structure open to visitors is known as the Temple of the Columns. This is another nicely restored palace type structure. It has five wide doorways opening up to interior chambers. The main architectural elements are banded colonnettes, and are pure Puuc style.

The above described structures all appear on the East side of the highway. Across from here are other structures of note.

On the West side of the highway are a cluster of plaza groups. All of these are closed to visitors except the Arch. The first group seen along the path is known as the Central Group. On the north side of the path is located the Pyramid Complex. This complex is in an unrestored state. It was built atop a low platform containing several structures. The Great Pyramid is the central structure of this group and can be viewed through the low forest. The construction of Highway 261 sliced through the northeast corner of this plaza.

On the south side of the pathway across from the Pyramid Complex is the Quadrangle. This unrestored, structural grouping is similar in layout to the one seen at Uxmal. Parts of the north side is seen alongside the path. Just to the south of the Quadrangle is another grouping of unrestored structures. It is here that the sacbe from Uxmal terminates. From the southern portion of this complex another sacbe runs due south across Highway 261 to the South Pyramid Complex.

The pathway continues westward and intersects with the Uxmal sacbe. The imposing Arch is seen to the north and is thought to have been the entrance to the ceremonial city. This undecorated arch, perched atop a stepped platform, is still impressive at over 15 ft/4.5 m in height.

To the west of the Arch is the Early Group, and the Northwest Group. The Early Group consists of several unrestored structures. The Northwest Group runs north/south along a low hill ridge. There are two main structures located here in a partially restored state, Structures 1A1 and 1A2. It is from the north structure that John Lloyd Stephens removed a carved, wooden lintel back to the United States. It was destroyed soon after arrival by fire.

Further south along the ridgeline is the West Group. This group has two separate complexes both of which appear to be undergoing restoration efforts. Structures 1A7 and 1A8 lie on the upper part of the ridge line. Just below is The Court of Structures comprising four buildings arranged around a small central plaza and are numbered Structures 2A2, 2A3, 2A6, and 2A7. These contains some nicely executed stucco designs, sculptured door jambs and mosaic stonework. One structure contains numerous red hand prints such as seen at San Gervasio and a few other sites. The significance of these handprints have not been fully determined.

There are numerous other single structures and small groups located throughout the site awaiting excavation and restoration.​ 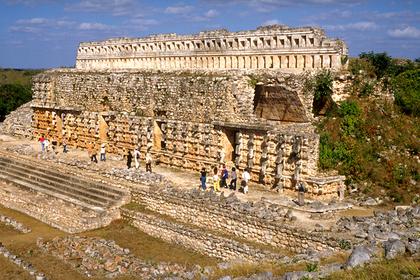 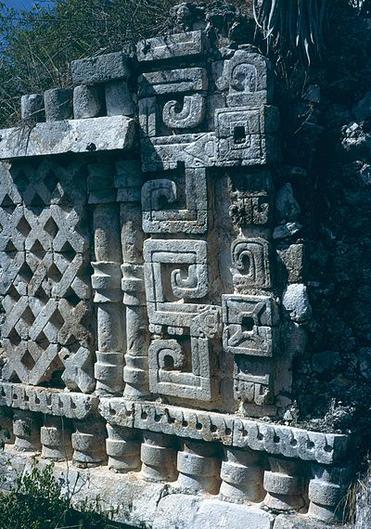 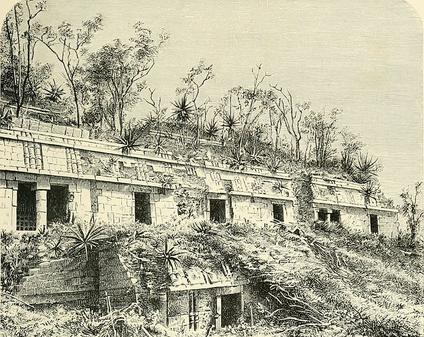 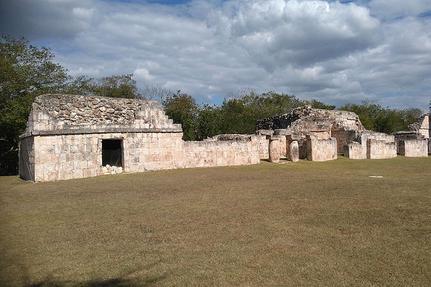 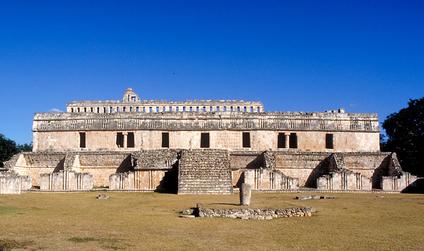 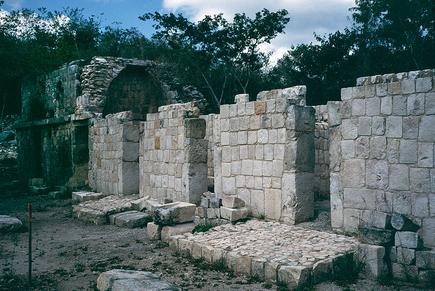