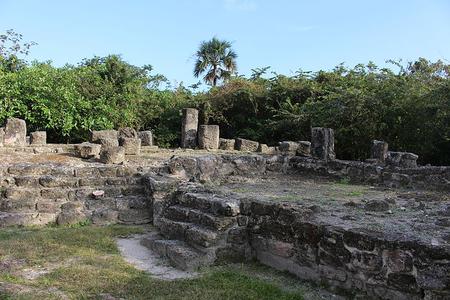 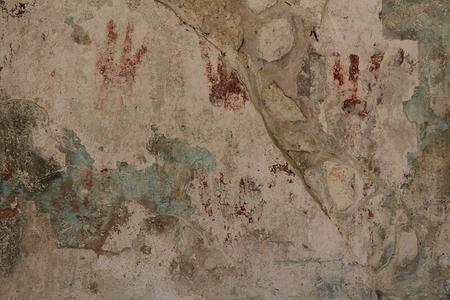 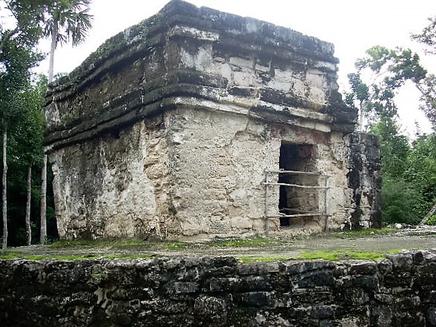 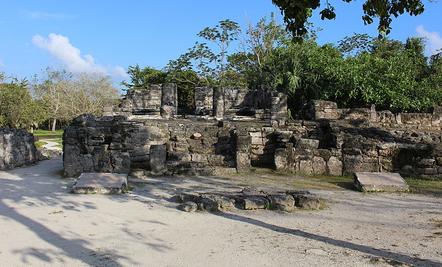 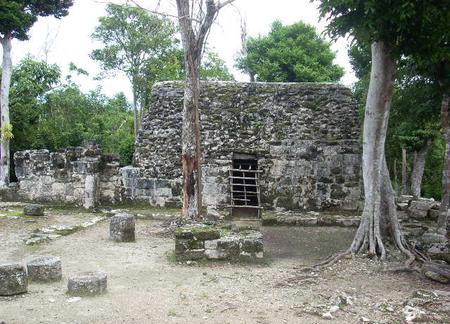 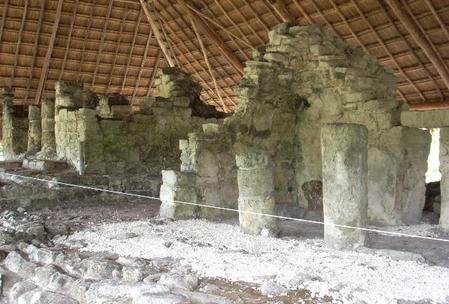 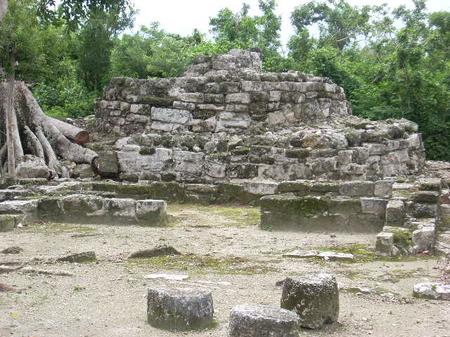 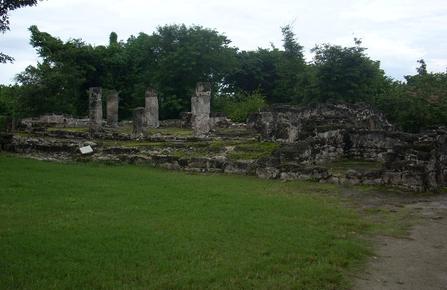 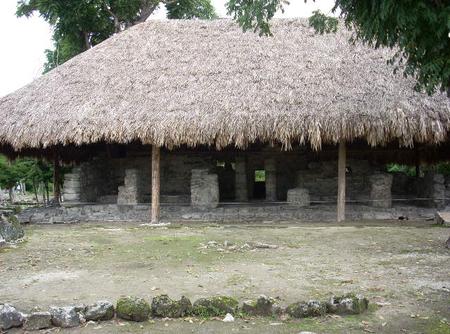 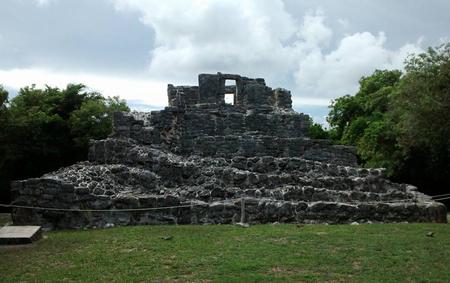 San Gervasio is a small, yet significant Terminal Classic (900-1200 A.D.) site located on the island of Cozumel off the east coast of the Yucatan Peninsula. It consists of 4 primary groups and numerous residential complexes spread out over about 2 square miles, of which only a small portion containing the major structures is open to the public.

The site was a major pilgrimage destination for the worship of the Maya moon deity Ix Chel; goddess of childbirth, weaving and medicine. It is thought that the original site name was Tan Tun Cuzimil, Flat Rock at the Place of the Swallows. It is the largest of over 30 much smaller sites located around the island, and controlled them through much of its history.

The site is located on the northern portion of the island. It is easily visited by car or taxi, as the island is not that large. Cozumel is located on the Caribbean side of the peninsula. Ferry service is available from either Playa del Carmen (shorter) or from Puerto Morelos (longer), and is about 45 miles/72 kms south of Cancun.

HISTORY
Excavations have shown that the site dates back to the Pre Classic (300 B.C-250 A.D). Structural architecture begins during the Classic (250-900 A.D.) and the site reaches its zenith from the Terminal Classic (900-1100 A.D.) through the early part of the Post Classic (1100-1450 A.D.) when it established itself as a major shrine and pilgrimage center. It was during this last period that Chichen Itza became the dominant force on the peninsular with San Gervasio being integrated into an increasingly expanded trade network. There have been no stelae (upright carved stone monuments) or other glyphic evidence recovered to identify its rulers or of its direct relationships to other sites.

It is thought that San Gervasio was one of the premier pilgrimage sites in all of Mesoamerica. As the site is located on an island a number of mainline sites such as Xel Ha and Akumal were able to gain status as embarkation points. The same could also be said of the island shrine site of Isla Mujeres with El Meco as its embarkation point further up the coast.

The site was still inhabited at the first contacts between the Spanish and the Maya. Juan de Grijaiva visited in 1518, followed by Hernan Cortez in 1519, and Panfilo de Navez in 1520. It was during this last visit that small pox was unleashed to devastating effects on the island and which would soon appear on the mainland itself with equally grim results. By 1600 Cozumel was deserted. It was resettled as a fishing village and later as a refuge for those Maya fleeing the War of the Castes (1848-1853). It was also a haven for pirates that nfested the Caribbean.

The first archaeological explorations were made by the amazing duo of John Lloyd Stephens and Frederick Catherwood in the 1840’s, and reported in Stephens’ book Incidents of Travel in Yucatan. In the 1980’s and 90’s the site was excavated, with restoration and consolidation work undertaken by INAH.

STRUCTURES
The first building group encountered when entering the site is the Las Manitas Group consisting of three structures. The main structure is called Las Manitas (Little Hands) named so for the red handprints that appear on the interior walls. The structure itself is residential in nature, consisting of two chambers with a portico. The roof, like most structures at the site, is missing and is covered by a palm-thatched palapa. The outer room was the residence itself, while the inner room was considered a personal sanctum. There are two standing columns that once graced the entrance to the structure. It dates to the Early Post Classic (1100-1250 A.D.), and was the house of the Halach Unic (ruler) during this period. Most of the structures here are of the “East Coast Style” as exemplified at the better known site of Tulum.

To the east of Las Manitas is located a small temple named Chichan Nah (Little House). It contains two rooms, the first a larger room, and the second a smaller inner sanctum having an altar.

On the southwest side of Las Manitas is a square structure with a single vaulted roof named La Tumba. A tomb was discovered here in 1973, the only one of its kind discovered at the site.

To the northwest on a separate path lie Structures 31 and 32. The compound consists of a small platform containing a two-room elite residence and small oratory.

The main civic/administrative complex is known as The Central Plaza Group. It is reached by a short sacbe (raised white stone road) to the west from Las Manitas and consists of several structures.  These form around a central plaza with an altar platform in the center. The northeast structure is known as The Columns. This structure is built upon a low platform and contains the remains of a single room reached by a central stairway. An interior bench runs along the walls with an altar or throne in the center. Chambers along the side were used to deposit six burials. Offerings of small obsidian knives, incense burners, and small stone figures were found. A double series of 7 columns which once held a roof of perishable materials gives the structure its name.

Los Niches-The Niches, is located on the southeast corner of the plaza. This structure is one of a group of three that share the same medium height platform. It consists of two rooms with two columns marking the main entry point. It is accessed via a central stairway. Connected to it on the same platform is Structure 25B and The Ossuary.

Structure 25B is a colonnaded hall once having a masonry roof supported by wood beams. It has a bench that runs along the interior walls. The southern side of the platform houses the Ossuary, a single room structure having a front portico.

The west side of the plaza consists of three structures, two of them on a shared medium height platform. The Alamo forms the northwest corner with The Temple of the Murals just to the south. The southwest corner of the plaza is held down by The Palace.

The Alamo is a two-roomed temple structure which once had a vaulted roof. An altar is located within the rear room. The entryway is divided between two columns. The entire building was once stuccoed with the inner rooms decorated in colored bands, spirals, and red handprints.

The Temple of the Murals is the central structure and is accessed via a central stairway. Two columns lead into the two-roomed structure which once had a vaulted roof. There are altars and benches within the outer room, presumably to receive the offerings of the numerous pilgrims to the site. Traces of brightly colored, geometric patterns are still visible.

The Palace is on the southwest corner of the complex and forms a truncated “L” on its own raised platform. It is accessed via a central stairway with a colonnaded hallway similar in design to The Columns, but larger. A flat roof once graced the structure. Benches line the interior walls, and a throne/altar was in the center. A total of 19 columns once supported the roof.

There are a number of sacbeob (raised, white stone roads) that lead out from here to other areas of the site and beyond. The western most sacbe leads 1500 feet/500 meters to a structure known as Ka’na Nah, and then onwards to the El Ramonal Group. The central sacbe leads 600 feet/200 meters to the Murcielagos Group, and on to the Nohoch Nah-The Big House. The third sacbe leads northeast 750 feet/250 meters to the Arch and also ends at the Nohoch Nah. This last sacbe, Sacbe 1, continues north to the small settlement of Punta Molas on the coast.

The most impressive and largest structure at San Gervasio is located to the northwest of the Central Plaza Group and is named Ka’na Nah (Upper House). This is a 4-tiered, truncated pyramid crowned with a small temple at its summit. The temple’s interior walls are lined with benches with an altar in the center. The entire structure was once stuccoed and painted in red, blue, ochre, green and black. The base and stairway was decorated with small human faces sculptured in stone. Architectural design, and colonial history implies that this was the structure that once housed the sanctuary containing the sacred image of the Moon goddess, Ix Chel.

The El Ramonal Group is considered to be the oldest group at the site. Excavations reveal a time frame of about 600 A.D., and the complex was the civic/administrative heart of the site during this time. This group is made up of a number of structures arranged upon a large platform with an accompanying small plaza.

There is an odd-looking arch that has been completely rebuilt at the north end of the core site connected by a sacbe, Sacbe 1, that leads out from the Central Plaza Group. Just beyond the arch is a structure called Nohoch Nah (Big House), a well-preserved temple with traces of a wall mural still visible. This is a fine one-room structure built on a raised platform with an intact roof. It had a central altar which may have been used to receive offerings from pilgrims entering from that direction. There are two stairways located on opposite sides of the structure which possibly allowed pilgrims to enter and exit in an orderly manner. The entire structure was profusely decorated with bright colors.

The Los Murcielagos (Bat) complex, consists of a platform with several structures. The structures have been dated to the Late Classic Period (600-900) A.D. and show a strong Puuc architectural influence typical in style from around 800 A.D. The main structure is a two-roomed building with a corbeled roof. The rear room contains an altar.

The other structure of note is Pet Nah, The Round House. This structure is set upon two circular platforms and contains a round altar. It dates from the Late Post Classic (1250-1520 A.D.).

There are a number of other individual structures and compounds located within the archaeological zone that are currently off-limits to visitors. 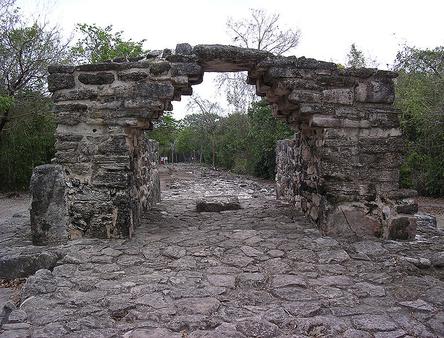 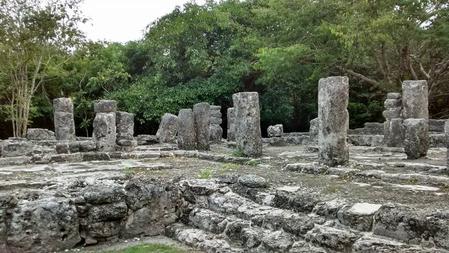 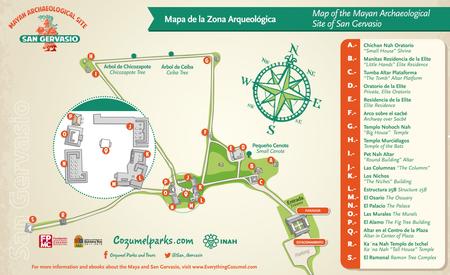