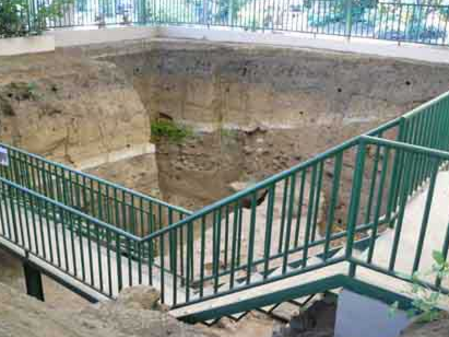 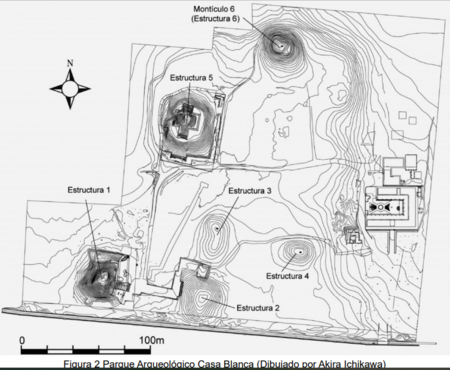 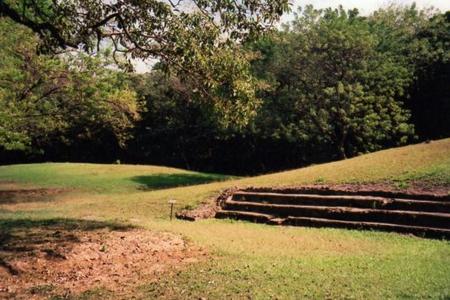 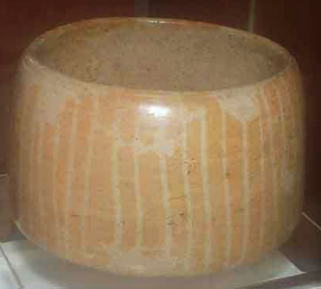 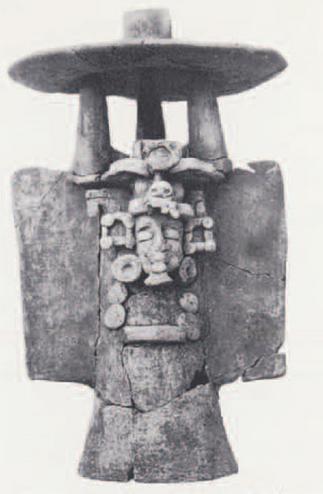 DESCRIPTION
Casa Blanca is a Maya archaeological zone located within the town of Chalchuapa in the Department of Santa Ana. The site derives its name from a coffee plantation on which it is located.

Casa Blanca is a smaller sector of the larger Chalchuapa Archaeological Zone, much of which has been buried under urban sprawl. The larger zone incorporated the archaeological area just north of the park boundary known as El Trapiche, and also the archaeological zone of Tazumal at the south end of town, along with other smaller enclaves. The whole zone is set on a NE/SW axis of about 8-15 degrees east of North, 1.25 miles/2 km in length, and is situated alongside Laguna Cuzcachapa. It is located on the fringe of the Highland Maya area, which included the great city-state of Kaminaljuyu in Guatemala.

Casa Blanca features three pyramidal structures, two of which have been partially restored. There are three other smaller mounds that combine to make up the archaeological park covering about 15 acres/6 hectares.

The site is easily reached from San Salvador traveling north about 48 miles/80 km on CA1 to Santa Ana. Just past the town center take Route 13 to Chalchuapa an additional 8 miles/13 km. The entrance is located at the east end of town on the north side of the road, mile marker 74.5. A brief description of El Trapiche is included.

HISTORY AND EXPLORATION
Casa Blanca, along with other preserved areas scattered within the town limits, is collectively grouped together into the Chalchuapa Archeological Zone. These other areas include El Trapiche, Penate, Laguna Cuzcachapa, Las Victorias, Laguna Seca, La Cuchilla, Nuevo Tazumal/El Cuje, Pampe, Los Gavilanes, and Tazumal. Tazumal is the only other site currently open to the public. These different sectors of what was most likely one large, expanding settlement experienced different phases of construction, occupation and external influences.

This area has a very early history dating back to the Early Pre-Classic (1300-700 B.C.). Outside of the severely damaged stela from El Trapiche, there have been no legible, carved monuments or other glyphic information recovered to identify its rulers or relationships with other sites. Sculptural and architectural features though show influences from the Olmec of the Gulf Coast, Kaminaljuyu of the Guatemalan Highlands, and Izapa along the Pacific coast, all occurring during different time periods.

It would seem that the area was an important source for obsidian which connected with these other sites through an extensive trade network that diffused cultural traits as well as ceramics and other goods. During the colonial period large indigo plantations existed in the area. It’s possible this was a continuation from earlier times as indigo is the basis of the famed Maya Blue paint, and may have been a principal source of this important trade item.

El Trapiche exhibits the earliest occupation, as well as, the earliest structures. These structures consisted of rammed earth platforms that were then covered in a stucco finish and first appeared in the Middle Pre-Classic (700-300 B.C.). The only carved stela found in El Salvador, Monument 1, was recovered in front of one of its platforms and has been dated to the Late Pre-Classic (300 B.C-250 A.D.). While severely damaged it clearly displays a seated ruler, Maya glyphs, and calendrical notations. A distinctive style of pottery exhibiting negative paint called Usulatan Izalco, is typical of this period.

Towards the end of the Late Pre-Classic the center of ceremonial activity moved 1,956 feet/600 m south to Casa Blanca. In the Early Classic (250-600 A.D.) the center of activity again shifted further south to Tazumal.

It is in the Early Classic where the history of Casa Blanca and the rest of the Chalchuapa zone starts to get a bit murky. Researchers are divided on a number of fronts. While the evidence points to a strong Maya presence up to this point, divisions of opinion begin to emerge as to what cultural groups are present at the end of this period, and on into the Late and Terminal Classic 600-1150 A.D. Also, the traditional date of 260 A.D. for the devasting eruption of the Ilopango volcano is now posited as occurring in c.460 A.D., or as late as c.536 A.D., further clouding the picture. It is also quite possible that there were numerous volcanic disruptions over this time span that negatively impacted the area. More research is needed to clarify these disruptions.

By the beginning of the Late Classic (600-900 A.D.) the population of Casa Blanca increases and construction activities resume. It begins its decline at the end of this period, and a new cultural group, the Pipil, enter and establish themselves throughout the area. Construction of new structures, and remodeling of existing ones, takes place within the Chalchuapa Zone. A widely traded ceramic style known as Tohil Plumbate makes its appearance.

The Late Post Classic (1200-1525 A.D.) exhibits ceramic evidence of Poqomam Maya occupation, this group also known from Kaminaljuyu, Guatemala. They are closely associated with Chinautia style ceramics which have been recovered through excavations. The area remained occupied through the colonial era, and continues into the present.

Research and excavations were first undertaken at Casa Blanca and the Chalchuapa Archaeological Zone by John Longyear in 1941, followed by Stanley Boggs in 1943 and who returned again in the 1970’s. Later reports were published by William Coe 1955, Robert Sharer 1968, William Fowler 1984, Kuniaki Ohi 2000, and several reports by Akira Ichikawa in the 2000’s.

STRUCTURES
Casa Blanca consists of several structures set upon a massive platform base measuring about 717 feet/220 m by 782 feet/240 m. It has a height of about 6.5 feet/2 m. The platform was constructed in the Late Pre-Classic around 100 A.D., housing six pyramids, and all constructed of rammed earth protected by a layer of stucco. The structures are set around three plazas.

Structure 1 is a truncated, multi-tiered structure situated on the west side of the main plaza. The pyramid base measures about 130 feet/40 meters square, with a height of about 32 feet/10 meters. The lower tier has sloping walls. An east facing stairway featuring balustrades rises up to the upper tier and a plaza facing terrace. A second structure is set upon the leveled surface with a secondary stairway rising to a possible ruined summit temple. The entire structure has been partially restored.

Structures 2 and 3 are two mound covered structures on the east side of the plaza. Structure 2 has a height of about 11 feet/3.5 m, and has a broad west facing stairway of about 81 feet/26 m. It has been suggested that this structure may be of a palace design.

Structure 4 is located across a small plaza to the east of Structure 3. It too is mound covered.

Structure 5 is a multi-tiered pyramid that anchors the north side of the main plaza. It has been partially restored and displays three construction phases with the last two dating to the Late Classic. The overall design is similar to Structure 1. It has a height of about 39 feet/12 meters, and a broad south facing stairway that extends up to the first tier. A second structure is then surmounted by a second stairway. A ruined temple with traces of paint graces the summit.

A noteworthy find was made in front of Structure 5 in 2006. Two parts of a smooth stela, an altar, and a sculpture of a stylized jaguar head were recovered. An offering of six ceramic vessels was discovered underneath the stela. The discovery of the stela/altar complex is important as this arrangement is a signature cultural characteristic of the Maya.

The east side of Structure 5 faces onto a separate plaza of which Structure 6 is at the northern end. This structure is mound covered and has a height of about 19 feet/5.8 meters. It is possible the aforementioned Structure 4 represents the southern end of this rather large plaza.

An excavation carried out by the most recent archaeological project is a roofed pit, known as the Archaeological Window, that exposes a series of natural and cultural levels. Clearly shown is the white layer of volcanic ash deposited by the great eruption of Ilopango.

EL TRAPICHE
El Trapiche, as already mentioned, is located just outside the Casa Blanca Park boundary. Pottery shards indicate a very early occupation dated to the Early Pre-Classic (1300-700 B.C.). This dating places El Trapiche back to some of the earliest recorded time periods, and therefore may have had an influence on the development of Lowland Maya culture.

The site features a ceremonial center that was constructed and occupied during the Late Pre-Classic (300 B.C.-A.D. 250). It’s main structure, Mound 1, is a pyramidal platform constructed of rammed earth and rubble fill. It is faced with stucco and most likely supported a temple structure of a perishable nature.

The structure has been recognized as stylistically similar to the Olmec La Venta pyramid, the oldest in Mesoamerica. It is the largest structure at El Trapiche at 75 feet/23m in height. It is among the largest Pre-Classic structures in the Maya area, and the tallest pyramid in El Salvador. The mound’s access ramp was excavated in 1967, and uncovered a significant assortment of Late Pre-Classic ceremonial offerings. These include a total of twelve ceramic caches containing thirty-two vessels.

A damaged fragment of a Late Pre-Classic stela, Monument 1, was found buried at the base of the Mound 1 access ramp, and has been described earlier in this report. A layer of volcanic ash was discovered above the stela and could possibly indicate a population interruption of the site in the Late Pre-Classic.  Again, it would appear that there were numerous disruptions due to volcanic activity over the millennia in the Chalchuapa area. Though the site underwent several cultural transfers and population fluctuations, it is apparent the site was never permanently abandoned. 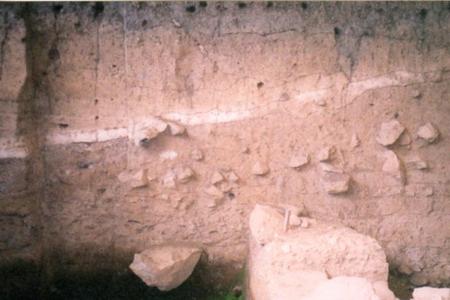 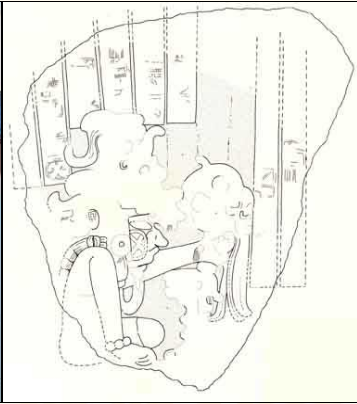 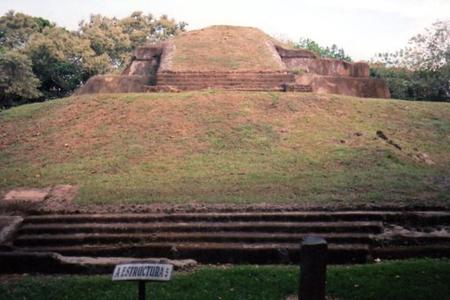 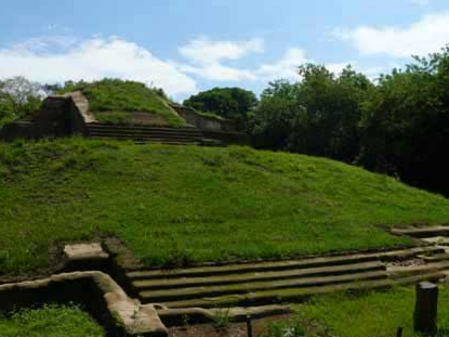 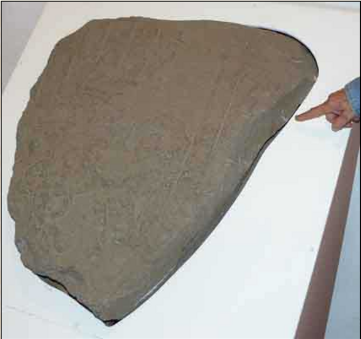 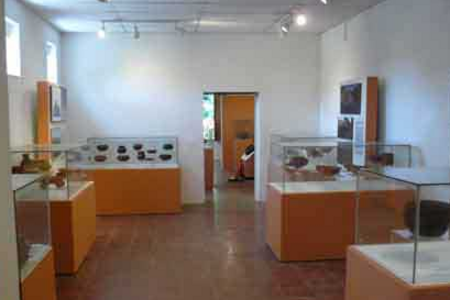 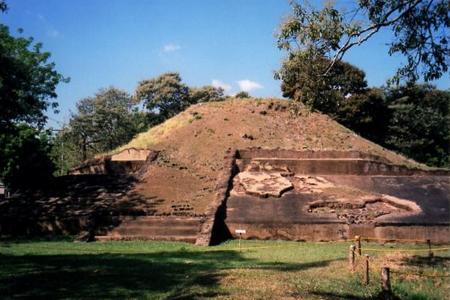 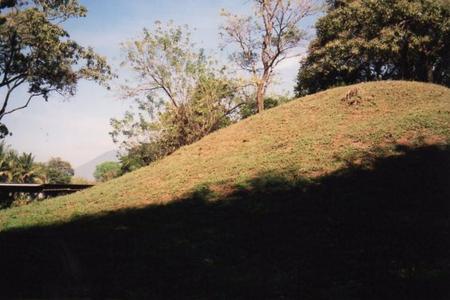 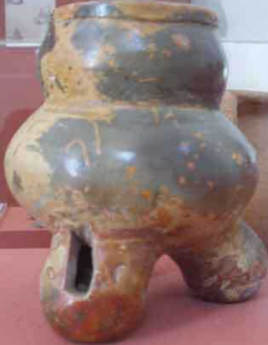 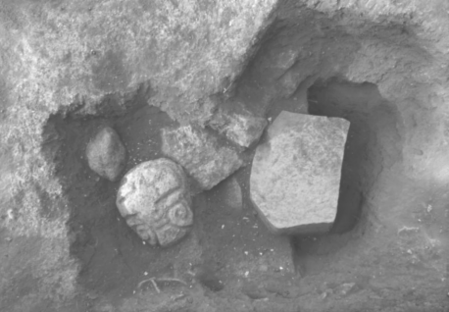 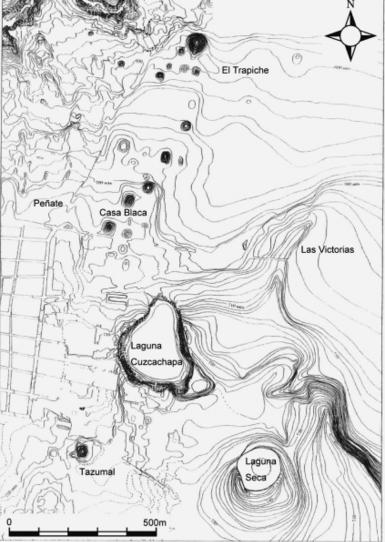 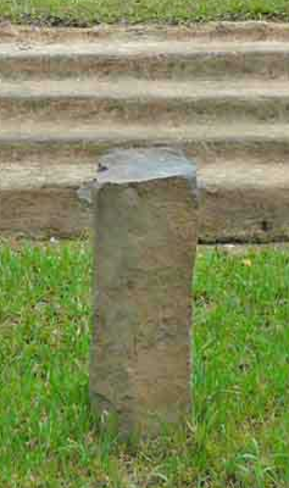 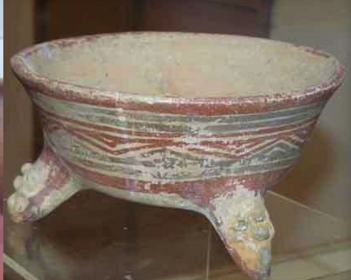