​​​​​​DESCRIPTION
Tonina, House of Stone in Tzeltel Maya, is a site small in area, yet containing a massive complex.  Its original name has been identified as Po. The acropolis is among the tallest structures in the Maya world reaching a height of 241 feet/74 meters. Strategically located at the western fringe of the Maya area, it overlooks one end of the Ocosingo Valley just outside the town of the same name. The site is oriented along a northeast-southwest axis. It was a major Maya capital during the Classic Period (400-900 CE), and a fierce rival of Palenque. There is a fine museum located here that contains a very rich assortment of Maya artifacts and sculpture from the site.

There are a number of exquisite sculptures in the round that have been discovered here, reminiscent of those found at Copan in Honduras. There are also beautiful bas reliefs and stucco decoration that evoke the grandeur of Palenque. Tonina has the distinction of having the last recorded glyphic text in the Maya World on Monument 101 with a Long Count date inscribed in 909 CE.

Tonina is about 40 miles/64k southwest of Palenque on the route MX199 towards San Cristobal de las Casas. Once in Ocosingo take the CHS218 southeast out of town for about ¾ miles/1.2km where good signage will lead you to take the left fork (Camino a Tonina) off the 218. The archaeological zone is a further 6 miles/10 km to the site. The site is little visited, which makes for a very pleasant day trip.

HISTORY AND EXPLORATION
Tonina was settled during the Middle Pre-Classic (800-300 B.C.), and reached its greatest prominence during the Late Classic (600-900 A.D.) as a regional powerhouse. The kingdom was in constant rivalry with Palenque to control the important trade routes that ran through the area.

A dynastic lineage has been deciphered from the 6th century onwards through the well-preserved stelae and other hieroglyphic inscriptions found throughout the site. There was a particular interest in recording warfare and prisoner taking at Tonina. Most of the structures were built and modified over the course of a number of centuries, primarily during the Classic Period.

The warfare with Palenque continued into the 8th century when another ruler, Jaguar Lord? (ruled c708-723), captured the king of Palenque, Kan Joy Chitam II, a son of Pakal the Great in 711 CE. This defeat left Palenque leaderless and adrift for ten years. After Palenque recovered the warfare resumed and continued through the rest of the century.

Tonina was involved in conflicts with other Maya kingdoms besides Palenque. Piedras Negras was attacked by K’inich Ich’aak Chapat (ruled 723-c736) in 725 CE. Statues located within Ballcourt 1 name prisoners from the great center of Copan who were apparently in league with Palenque. A monument names a vassal prisoner of the great kingdom of Calakmul, though it appears they were also close allies at times. Other smaller polities were also attacked and recorded on monuments and inscriptions found throughout the site.

A possible female ruler, Lady K’awiil is named on a damaged text that mentions her death in 774 CE. The last recorded ruler of Tonina, Ruler 10, is inscribed on a monument bearing a date of 904 CE, and he may have still been king when the last dated monument was erected in 909 CE to mark a Katun Ending. The site, while in a reduced state of prestige and population, carried on into the 11th and possibly the early part of the 12th century before it was abandoned

An early account of the site was made by Fray Jacinto Garrido towards the end of the 17th century. An expedition to the site was made by Guillaume Dupaix in 1808 and was accompanied by Antonio Castaneda who produced several drawings. Those intrepid adventurer/explorers John Lloyd Stephens and Frederick Catherwood arrived in 1840, and described some of the monuments. There followed other explorers at the end of the 19th century, most notably Eduard Seler and Karl Sapper. Further explorations were conducted by Alfred Tozzer (1904), Frans Blom and Oliver La Farge (1925), Morley and Thompson (1944), and Ian Grahm (1973). Beginning in 1972, excavations and consolidations were carried out by the French Tonina Project. INAH began work at the site in 1981 which continues to the present day.

The current work at the site has revealed that what was once considered a natural hill that backed up on the Acropolis is actually an enormous pyramid base. Excavation is ongoing, and new information will be added to the description of the structures when reports are issued.

STRUCTURES
Tonina is situated on the northern end of the Ocosingo Valley. A single raised plaza, the Great Plaza covering about 15 acres/6 ha, contains all the principal structures. It is entered through Ball Court 1, a sunken ball court of standard design with enclosed “end zones” and situated on the southeast end of the Grand Plaza. Steps lead down into the court from all three sides of the “end zones”. The central, playing field walls have protruding sculptural elements, three on each side. Two on each side depict serpent heads while the northern most element each depicts a bound prisoner and a glyph band. The alleyway also incorporates three disc markers within the playing field. According to deciphered glyphic information the ball court was dedicated in 699 CE. A later event was recorded in 776 CE to commemorate a military victory over a lord of Palenque. A number of exquisite sculptured monuments of captured lords in the round are located here.

There are several, raised platforms on the west side of the Great Plaza which may have contained structures of a perishable nature. A structure named the South Temple is located on the south end of the plaza, and has been partially restored. This structure consists of a raised platform base of about 9 feet/ 2.75 meters in height with a base area of about 120 feet/36.5 meters x 149 feet/43.5 meters. An unexcavated stairway leads up to a broad terrace that has the remains of two stelae. At the rear of the terrace is a three-tiered platform structure having three staircases that lead to a leveled summit. Superstructures of a perishable nature may have once been located here. At the foot of the platform base is an interesting array of five small, square platforms each with steps on its sides. Behind the South Temple is a large unexcavated mound.

Between the South Temple and Ball Court 1 is an altar/dance platform, the Altar of Sacrifices, with steps on all four sides. A circular altar, monument 148, is associated with this structure. Fully half the Great Plaza is located on private property.

At the north end of the Great Plaza is the Great Acropolis. This is a mammoth structure built into what was once thought a hillside. It has now been determined that the “hillside” is a huge man-made platform base that reaches a height of 241 feet/74 meters, among the tallest structures in all of Mesoamerica. It should be noted, however, that it may yet be identified as an extensively modified hill. Further research is needed. The complex comprises structures built upon seven levels housing 8 palaces, 13 temples, numerous smaller structures, sculptures, panels, courtyards and terraces. Monumental staircases are in abundance. There are 260 steps to the top of the acropolis. At the foot of the Acropolis is a small ball court, Ball Court 2.

The complex housed administrative, civil, ceremonial, and residential sectors all of different size and height set on the seven terraced levels. A number of tombs have been located within the complex. A rare stone sarcophagus dating from 840-900 AD has been recovered with skeletal remains and objects similar to those of the Red Queen of Palenque.

The first three terrace levels are accessed from very broad, central stairways. On the second terrace is The Palace of the Underworld, which contains a rare labyrinth used for ritual purposes. The third level displays a large stone wall panel of a zig-zag pattern identified with the Palace of the Frets. Next to this panel is a throne with an accompanying Venus stucco frieze.

The upper levels of the complex are accessed by more restricted and smaller staircases. Of particular interest is The Mural of the Four Eras/Four Suns, an impressive stuccoed mural located on the fifth terrace, and also known as the Frieze of the Dream Lords. On this same level was found wonderful sculptures in the round that depict some of the rulers of the site. Also impressive is The Temple of the Monster of the Underworld, and The Temple of the Paintings. The House of Fireflies was the throne room of K’inich B’aaknal Chaak. A highly decorated stela, Stela 1, depicts ruler B’alam Ya Acal/Jaguar Bird Peccary (ruled 6th century) who gazes across the Grand Plaza and beyond.

The uppermost level has two pyramidal structures with one being set on a higher platform base and each crowned by a temple, one being called the Temple of the Smoking Mirror, and the other the Temple of the Prisoners. The pyramid temples are reached by central stairways from all four sides and offer a spectacular view of the Ocosingo Valley. Behind the pyramids is a broad summit terrace that contains several small structures.

A sculpture, Monument 101, depicts a ruler and denotes a Katun Ending, 10.4.0.0.0, 12 Ahau 3 Wo, January 20, 909 CE, the latest known Long Count date in the Maya area. This sculpture may have originally been located on the fifth level of the Acropolis. It is now housed in the site museum. An interesting method of sculpture construction is evident at Tonia. Many of the sculptured monuments depicting rulers were tenoned upright into a square base, both of which contained glyphic texts. I have not seen this type of assemblage viewed or described at other sites.

There are far too many structures, inter-connected chambers, architectural elements, friezes, platforms and courtyards of the Great Acropolis to describe them all in detail. Plan on at least a half a day here in order to appreciate the magnitude of the archaeological zone. 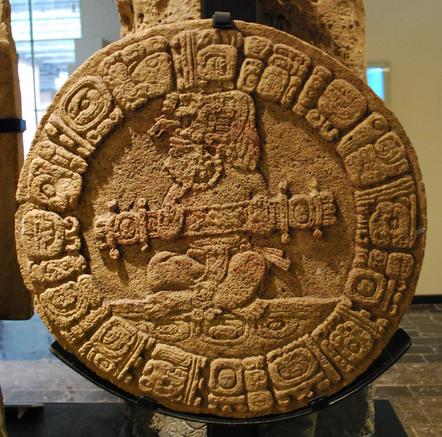 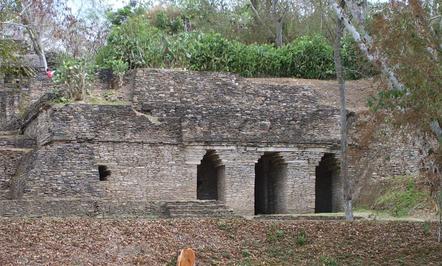 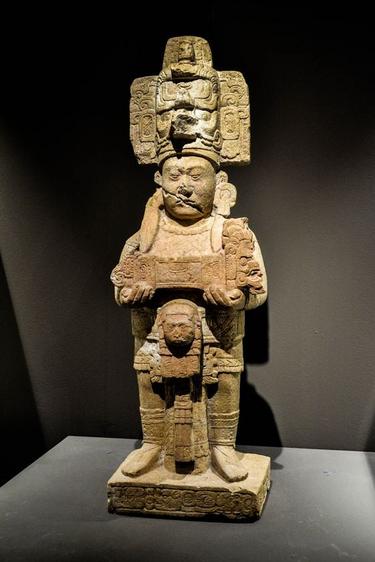 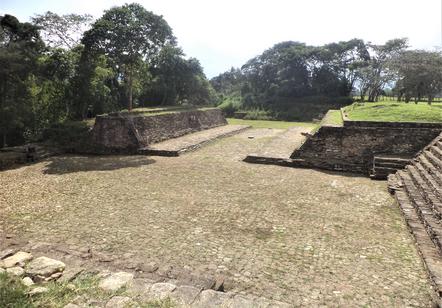 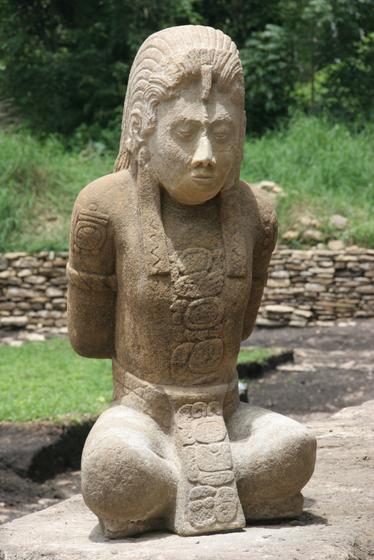 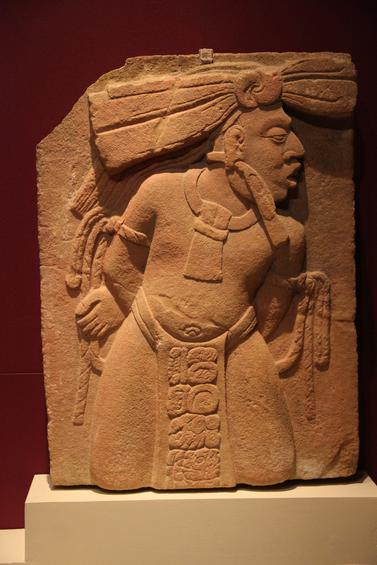 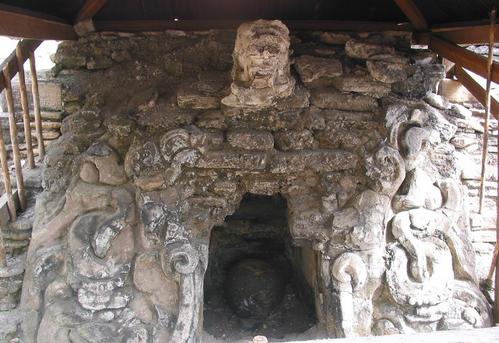 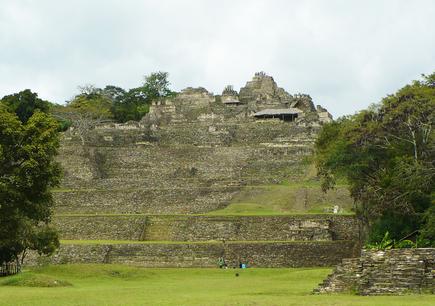 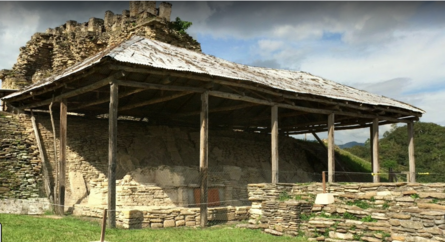 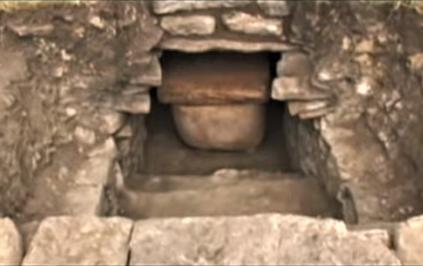 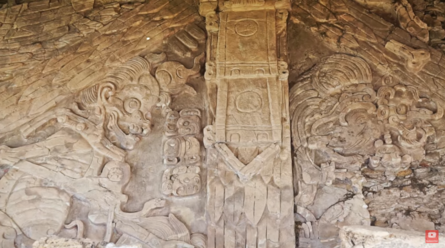 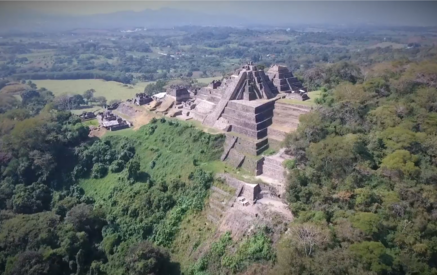 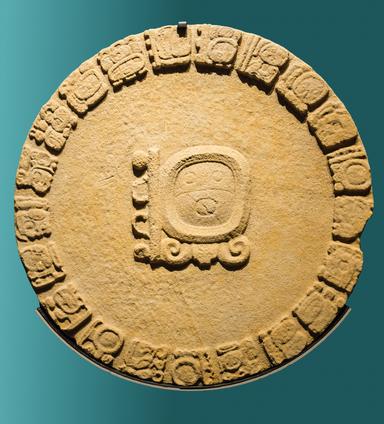 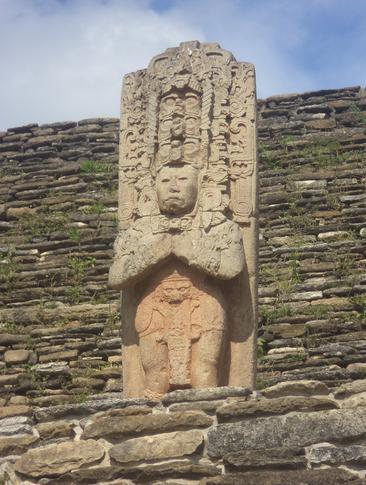 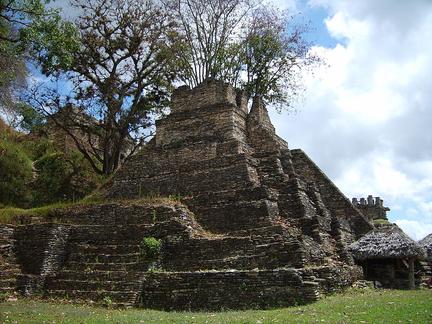 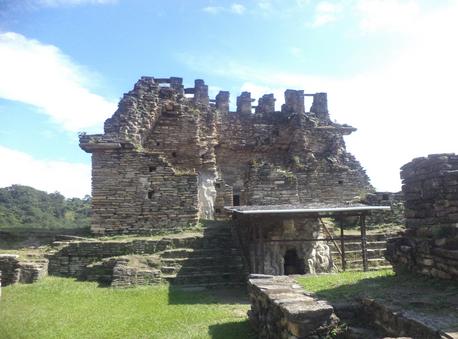 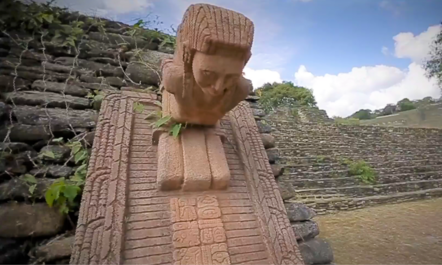 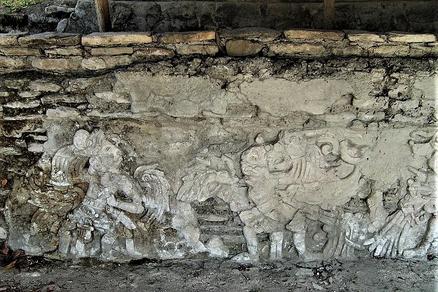 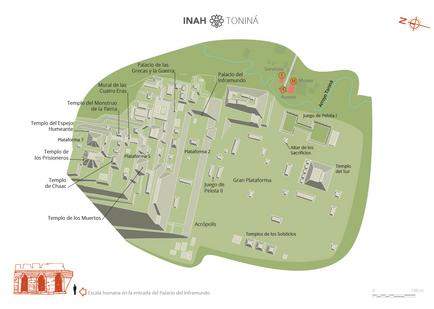 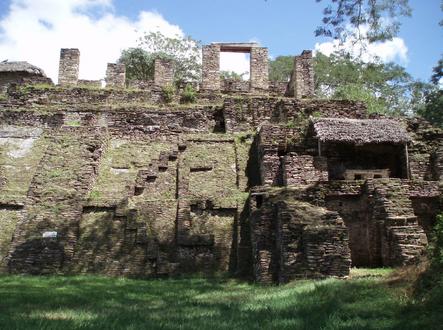 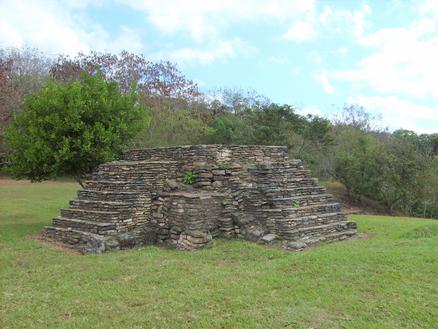 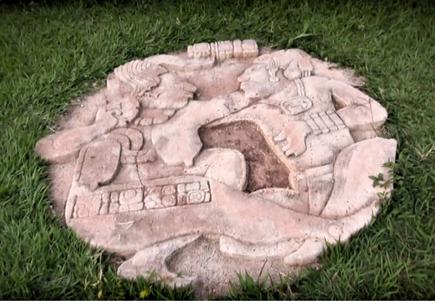 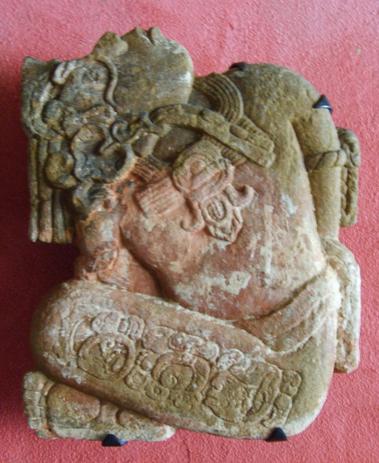 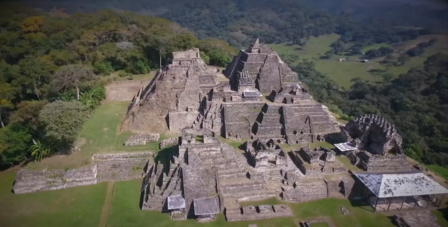