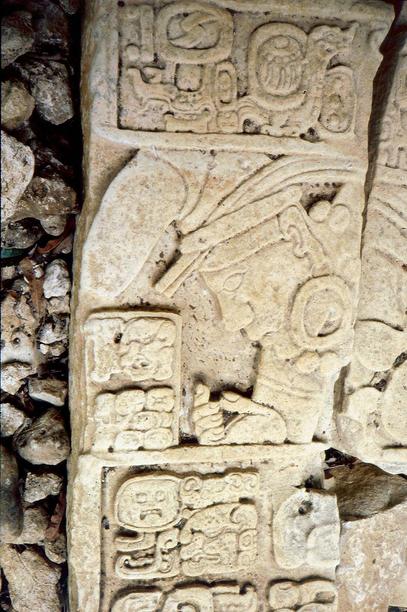 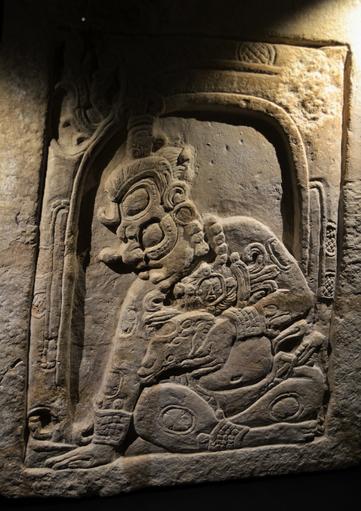 DESCRIPTION
​​Dos Pilas (Two wells/springs) is a medium sized site which played an important role in the Tikal/Calakmul superpower rivalry during the Classic Era (250 A.D.-900 A.D.). It was the capital of what has become known as the Petexbatun Kingdom, and used the same emblem glyph as Tikal, Yax Mutul. There is a well-defined list of rulers from 629-761 A.D., and this is when its monumental constructions occurred. The site contains a number of informative hieroglyphic staircases, and has a large cave system that runs throughout the area.

The site was strategically situated between the Pasion and Salinas rivers in the Petexbatun region of northern Guatemala. It was founded by the great city-state of Tikal, about 73 miles/117 kms to the northeast, to control the important trade along the two rivers, part of the great Usumacinta river system which facilitated the exchange of goods from the Highlands down to the Gulf of Mexico.

Dos Pilas is located 17 miles/27 kms west of the site of El Ceibal/Seibal. Both of these sites are found just off Highway 5 near the village of Sayaxche. It is most easily reached by flying into Flores, an island city in Lake Peten Itza. It is about an hours drive south to the town of Sayaxche. From there it is about 10 miles/17kms to the site. Sayaxche can also be reached by road traveling north from Guatemala City on Highway CA14 to Highway 5, or by road west from Belize on Highway CA13 to Flores.

HOURS: 8 A.M.– 5 P.M.
ENTRANCE FEE: U.S.$8/Q60
GUIDES: Tours and guides can be arranged at Sayaxche or Flores
SERVICES: None
ON-SITE MUSEUM: No
ACCOMODATIONS:  Food and lodging can be found in Sayaxche of Flores
MISC:

HISTORY AND EXPLORATION
The site of Dos Pilas was founded by the Tikal King Kinich Muwaan Jol II in 629 A.D., though there is ceramic evidence of earlier settlement activity from the Pre-Classic (300 B.C.-250 A.D.). He installed his young son, B’alaj Chan K’awiil (ruled 629-692), as ruler of this new kingdom. This intrusion into an already inhabited region was designed to exert direct control through force over the important river trade routes running through the area. The daughter of B’alaj Chan K’awiil, Wak Chanil Ajaw (Lady Six Sky), later went on to found a new dynasty at Naranjo (ruled 682-741 A.D.).

Tikal was bitter enemies with the equally powerful city-state of Calakmul. Both of these great kingdoms fought for control over the extensive river trade routes that connected the Guatemalan Highlands to the Peten region, and eventually to the Gulf of Mexico. These two fought continuous wars over a period of centuries, with each defeating the other at times. The results of these wars severely weakened the losers and their allies, and strengthened the winners.

Dos Pilas remained a loyal ally to Tikal until events in 648 A.D. led to a highly unusual outcome. By this time, Tikal and Dos Pilas were separately ruled by brothers of the same dynasty. Calakmul attacked and defeated Dos Pilas, but did not remove B’alaj Chan K’awiil from power, instead making him a vassal of that great city. In 657 A.D. Dos Pilas attacked and defeated Tikal. This act of treason was also orchestrated by Calakmul at the site of Quirigua against Copan. Tikal later returned the favor by defeating Dos Pilas in 672 A.D. So, back and forth it went.

Around 700 A.D Aguateca was incorporated into the Petexbatun Kingdom and made a co-equal dynastic center. It is located about 9.5 miles/10 kms to the southeast. In 735 A.D. Dos Pilas attacked and captured the king of Seibal, Yich’aak B’alam, which thereafter became a vassal city. In 745 A.D. the great city of Yaxchilan on the Usumacinta River became the next victim. However, after the crushing defeat of Calakmul in 761 A.D. by Tikal, Dos Pilas was abandoned with the last known king, K’awiil Chan K’inich (ruled 741-761 A.D.) fleeing, most likely to the more defensible Aguateca.

The whole area became embroiled in endless warfare with the result being the collapse and abandonment of many of the sites throughout the region. Dos Pilas was briefly reoccupied in the early part of the ninth century. Structures were stripped of their stone to erect defensive walls which proved insufficient from attack, and the site was soon permanently abandoned.

The site was first reported on by Jose Maria and Lisandro Flores de Sayaxche in 1953. Ian Graham visited the site in 1967 and produced the first site map and descriptions. The University of Yale and the University of Vanderbilt conducted surveys and excavations beginning in 1986-1994. Federico Fashen oversaw excavations on Hieroglyphic Stairway 2 under a grant from FAMSI in 2001-2.

STRUCTURES
There are close to 500 mounds stretched along an east-west axis with two main groups of monumental architecture. There are four known hieroglyphic stairways that have been recovered. A number of caves and underground rivers are found within the site. Caves were an important focal point for religious ceremonies, and structures were often built above or around them.

The Central Group is set around a large plaza at the western end of the axis, and oriented slightly east of north. Several stelae are located within the plaza. A three-tiered platform forms the base for a structure known as Structure L5-49, which is the tallest at the site, about 65 feet/20 meters. It is located on the south side of the plaza, and is accessed by a broad central stairway to the first tier containing the informative Hieroglyphic Stairway 2. Ten new risers of the stairway were discovered in 2001, and in total contains one of the longest inscriptions in the Maya area. The text of the stairway reveals the history of the interactions between the principal sites in the region from 623-684 during the reign of B’alaj Chan K’awill. At the base of the stairway are two carved hieroglyphic panels. A narrower stairway leads up from the first-tier terrace to the summit. There are three small pyramidal temples that surmount the summit platform, reminiscent of those found at sites such as Palenque and Tikal.

Structure L5-1 is located on the east side of the plaza. A rich tomb was discovered here. In front of this structure is a stela, Stela 8, erected by Ruler 3, Ucha’an Kin Balam (ruled 726-741), in 726 A.D. It honors the memory of the previous ruler, Itzamnaaj K’awiil, who may be the occupant of the tomb. At the northeast corner of the plaza is the ball court. Two stelae have been repurposed as panels imbedded into each side of the ballcourt structures and face each other across the ballcourt alley. On the north side of the plaza is a long, low platform with rooms that were possibly used for civic or residential purposes. A platform structure is on the west side of the plaza that has a hieroglyphic stairway. Behind this structure and to the northwest is a small complex, Group L-4. One of its structures. L4-35, contains a hieroglyphic text that may be part of a stairway.

To the south behind the Central Group is located the Palace Group. This is a large complex with two interior raised courtyards, each surrounded by low platforms and rooms. It is accessed from a lower plaza on the east side of the complex. The southside of the lower plaza is anchored by Structure L5-25, a pyramidal structure, which contains a hieroglyphic stairway.

The Duende Group is found at the eastern end of the axis, about .6 mile/1km from the Central Group. It was constructed under the reign of Izamnaaj K’awill (ruled 698-726). This group is centered around a central plaza, and is oriented slightly west of north. It was built into the side of a natural hill. Structure P5-7 is on the north side of the plaza, and is the second highest structure at the site. The structure is similar to Structure L5-49 except that it is surmounted by only one temple instead of the three found there. The east and west sides of the plaza contain small linear platforms. Six stelae have been rediscovered within the group, while a nearby sinkhole was found to contain a cave which runs underneath the main structure.

Centrally located between the two main groups is a smaller group known as the Bat Palace. This was an elite residential/ritual complex centered around a cave entrance. A destroyed royal throne was recovered from within one of the structures demonstrating the violent end to Dos Pilas.

The structures suffered greatly from the hasty construction of defensive walls just prior to the sites’ abandonment. They are still visible, and surround the two main groups. 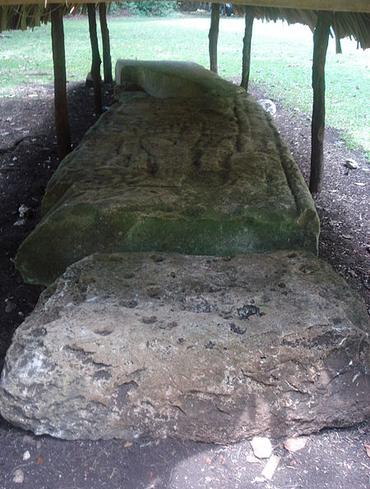 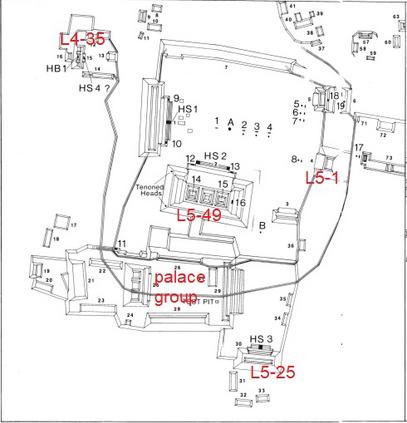 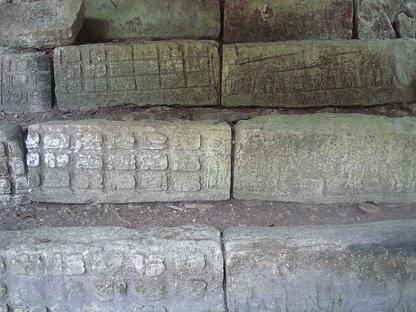 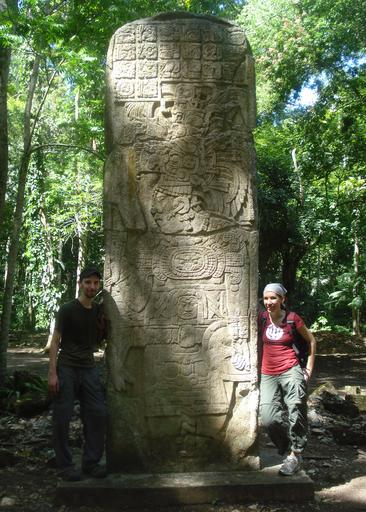 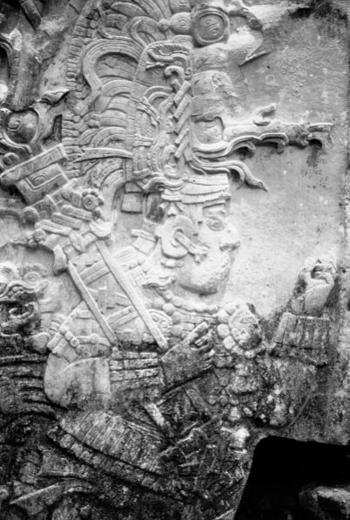 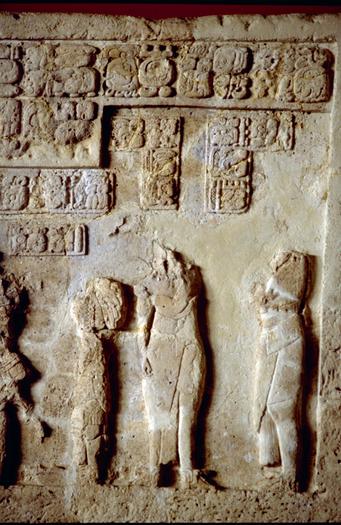 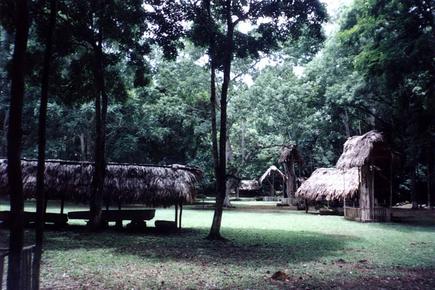 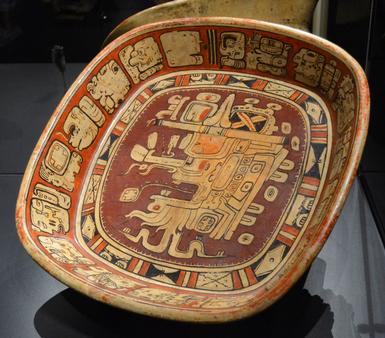 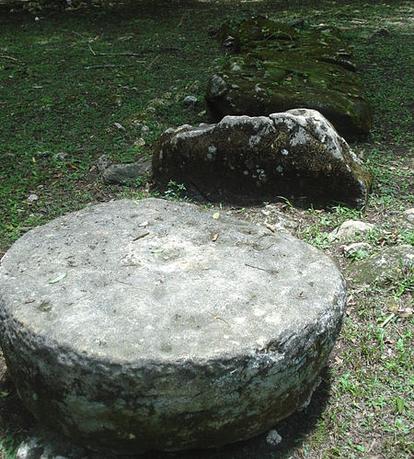 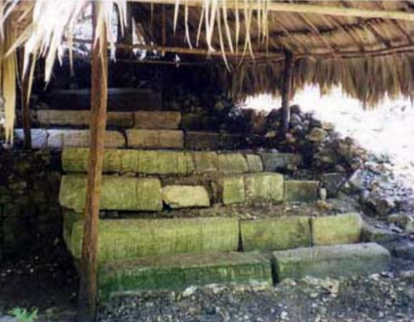 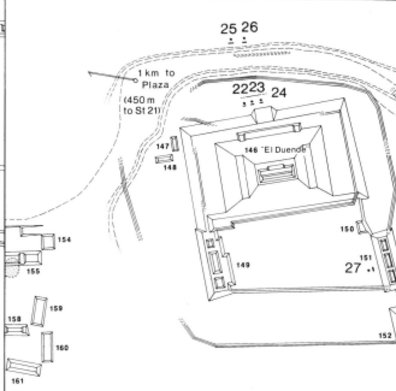