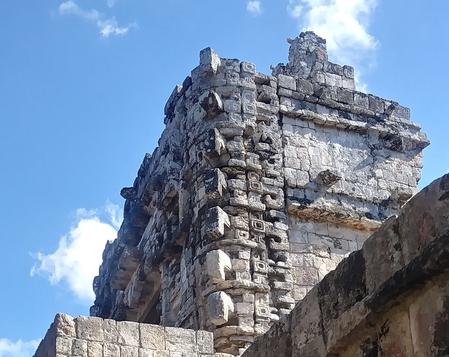 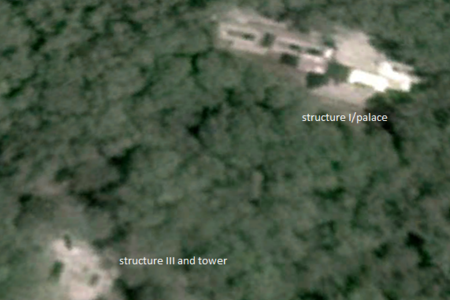 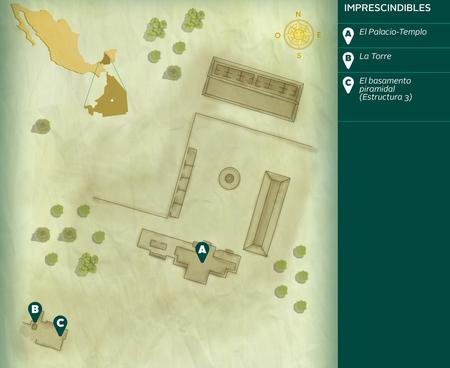 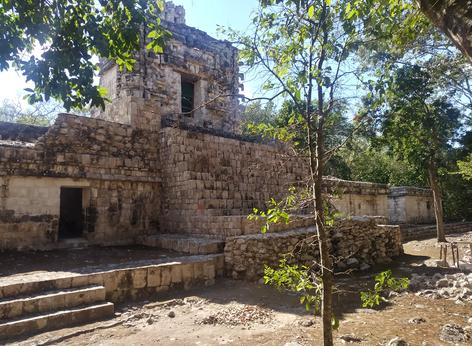 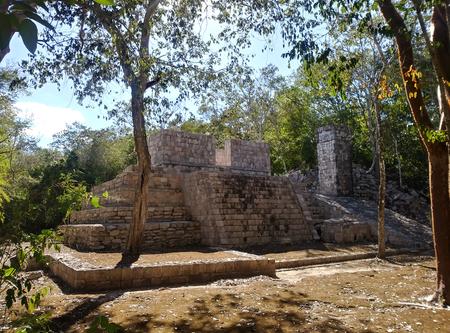 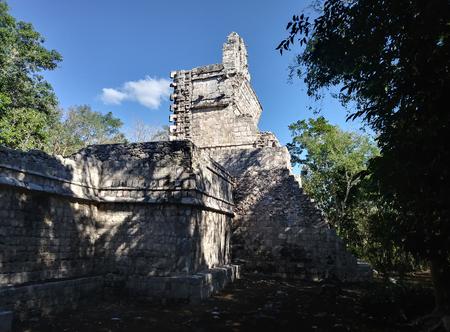 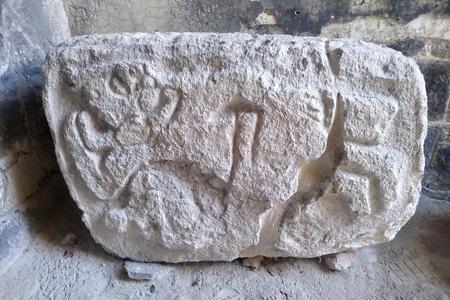 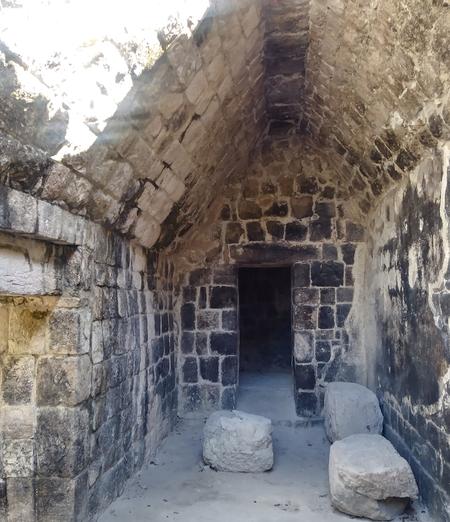 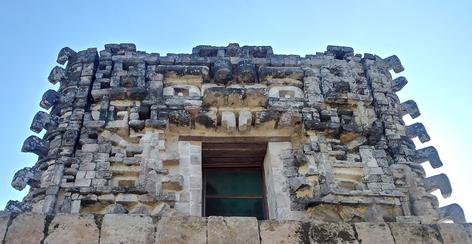 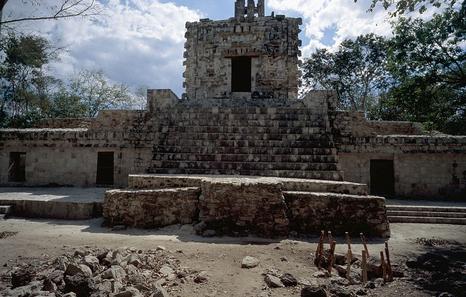 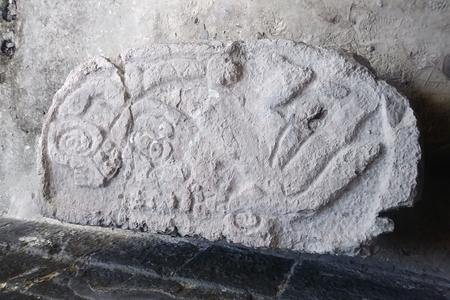 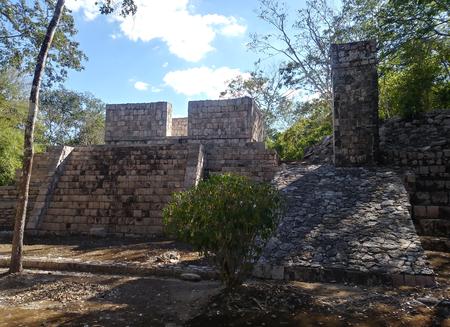 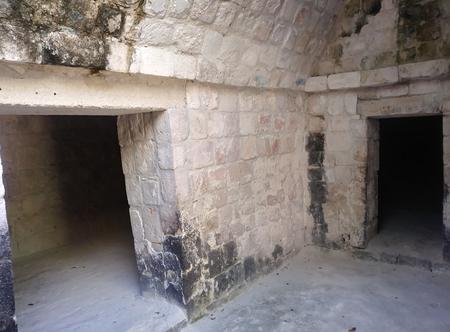 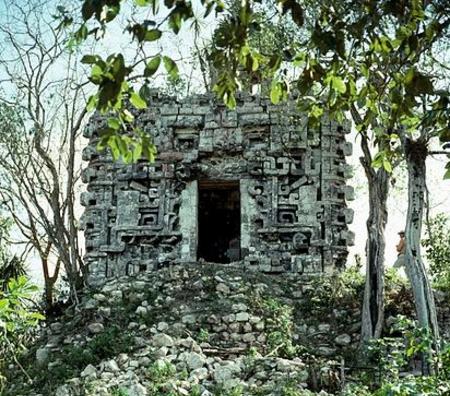 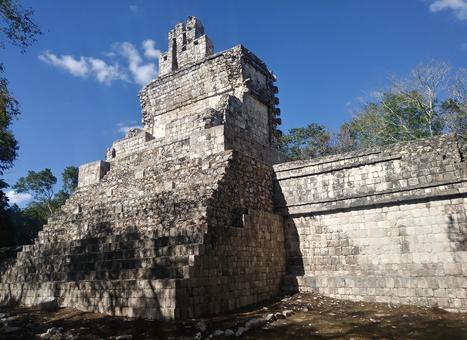 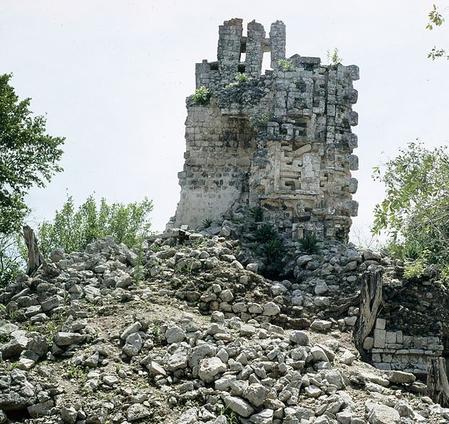 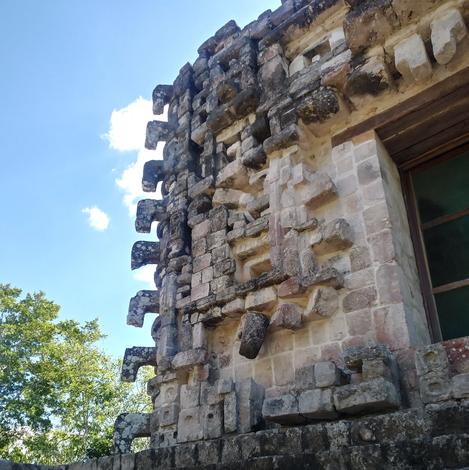 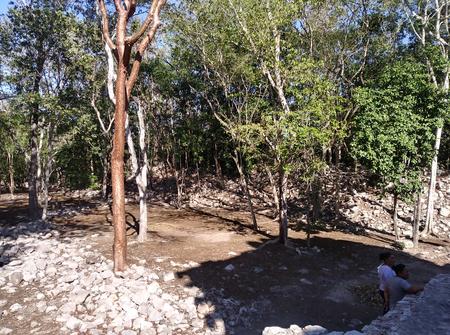 DESCRIPTION
Tabasqueño is a notable Chenes style site built atop leveled hilltops. It has a nice representation of the Itzamna earth deity incorporated about a doorway and façade of its principal structure. The site received its name from the well-known explorer, Teobert Maler, in reference to a nearby ranch. Its original name is unknown.

The Maya inhabitants obtained water through three sources: two aguadas (natural reservoirs) located to the east and to the west of the site center; two caves within the heart of the site, and a series of chultunes or underground cisterns for rainwater.

As with most sites, the buildings of Tabasqueño are aligned along astronomical lines (this site about 17 degrees east of north), reflecting a pre-planned orientation of the site, and the importance of observations of the sun and night sky.

The site was severely damaged by Hurricane Gilbert in 1988, the most destructive storm to ever impact Mexico. Restorations efforts followed, and today the main Palace structure has been returned to its former self.

Tabasqueño is about 72 miles/116 kms from the state capital of Campeche. Travel out of the capital on Highway 261 about 47 miles/76 kms to the town of Hoplechen. From there head south on Highway 269 to Pakchen, a distance of about 18 miles/29 kms. Continue south out of town on Highway269 about 3.5 miles/5.5 kms to a well-marked turnoff on the west side of the highway. From there it is about 1.25 miles/2 kms to the site.

HISTORY AND EXPLORATION
Ceramic and architectural style point to a relatively late timeline beginning in the 7th century A.D., with the site being occupied into the Early Post Classic ((900- 1150 A.D.).  Any information obtained from the decipherment of the inscribed monoliths and stelae have not been generally reported. Therefore, no record of its rulers or associations with other sites can be reported here at present. The site, however, is located within an area that includes Hochob, Pakchen, Dzibilnocac, and is presumed to have had associations with them, along with the important site of Santa Rosa Xtampak further to the northeast.

The first explorations and photographs of Tabasqueño was undertaken by the well-known Austrian explorer Teobert Maler in 1885. Due to the remoteness of the site, no further investigations were carried out until 1936 by Edwin Shook and Harry Pollock.

The first excavations/restorations were done by Augustin Pena Castillo in 1979. There followed Raul Pavon Abreau of INAH, and George Andrews in the 1980’s. Significant restoration work was carried out by INAH after the disastrous destruction wrought by Hurricane Gilbert. Further consolidations were carried out by Antonio Benavides C. and Sara Novelo O. in 2009 during which four monoliths with reliefs were recovered.

The North Group is considered the most important. Here can be found Structure I also known as the Palace/Temple, a two-story structure. It is a fine example of the intricate mosaic style of Chenes architecture, and very similar to the temple atop the East tower-pyramid at Dzibilnocac.

Structure I sits upon a raised platform and contains 10 chambers; eight on the ground level, and two on the upper story. The lower chambers open onto a north facing plaza. Some of these are double, even triple suites running both lengthwise or widthwise. Three of these chambers contain benches, while a number of rooms still show traces of blue horizontal bands.

The upper story contains the Itzamna mosaic façade on the north facing chamber. On the corners are stacked Chac (rain god) masks giving a sense of a cascading waterfall. The south side of the temple has mostly collapsed with no decoration remaining. Stone tenons extend outward on the east and west sides along two separated rows of moldings. Stairways ascended both the north and south sides of the temple which faced onto opposite plazas.

A perforated roof comb runs across the central wall of the two chambers, and is thought to have displayed stuccoed figures. Teobert Maler recorded the whole façade and roof comb being painted a deep red, now vanished. The structure had to be completely restored after Hurricane Gilbert.

On the west side of the Structure I platform is a separate, smaller structure having but one chamber. This structure had a vaulted roof, part of which remains. It is unusual as this structure breaks up the symmetry of the Temple/Palace complex.

The plaza that faces to the south of Structure I is flanked by a series of low, rubble mounds. No information can be reported on at this time. Further on across the forested plaza one comes upon Structure III, the Tower Group, which is located about 194 feet/59 meters to the southwest.

The Tower Group is supported by a low platform with its attendant structures laid out in an asymmetrical manner. The main structure, Structure III, anchors the east side of the platform. It rises up upon a four-tiered base housing a single roofless chamber. Its central, north facing stairway leads down into the plaza. The rear of the structure consists of a plain block wall. At the far west side of the platform is a ruined structure also having a stairway leading down into the plaza.

In the center of the platform is a square tower with a ramp leading up to it, both being quite unusual in Maya architecture. The tower is one of only three or four reported, all within the Chenes region. Some of these towers supported a roof comb. The tower measures about 5 feet/1.5 meters square, with a height just under 15 feet/4.5 meters. Stone tenons extend out above an upper molding that may have held stuccoed figures or decorations. It has been suggested by some researchers that the shadow cast by the tower acted as a device to record the passage of the sun during the equinox and solstices.

The South Group and the West Group contain no standing architecture to report on.

Tabasqueño is well worth a visit, especially when combined with the nearby sites of Hochob and Dzibilnocac. Santa Rosa Xtampak, while in the general neighborhood, is too large a site to cram into a single day visit, and should be reserved for at least a half day if not longer. 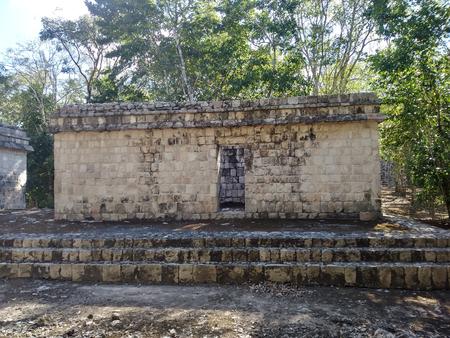 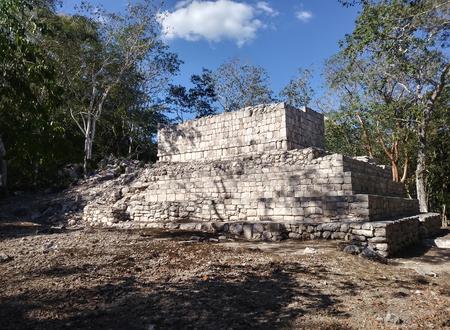 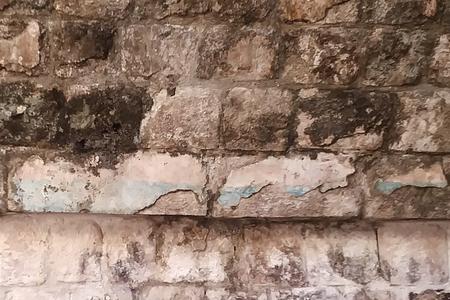