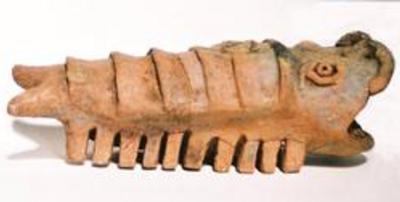 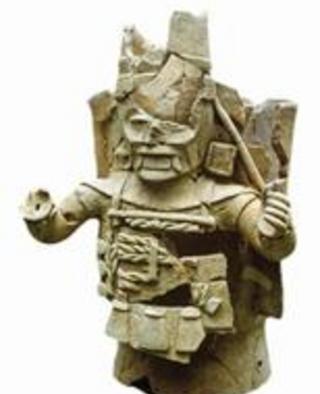 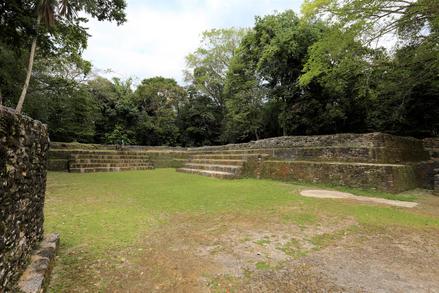 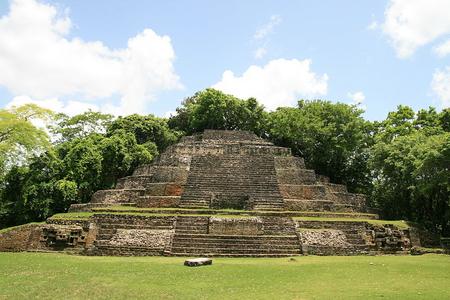 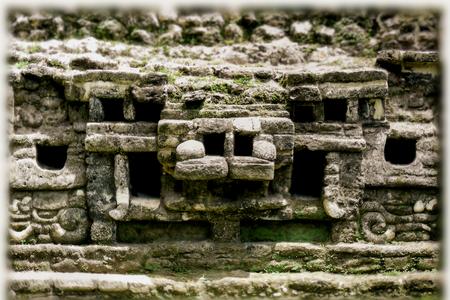 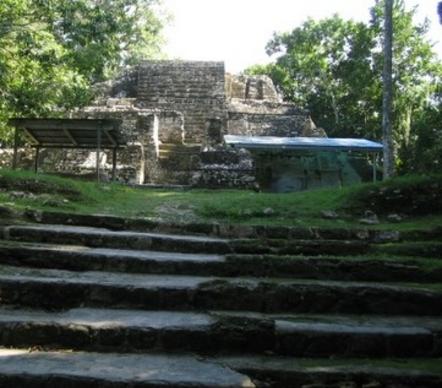 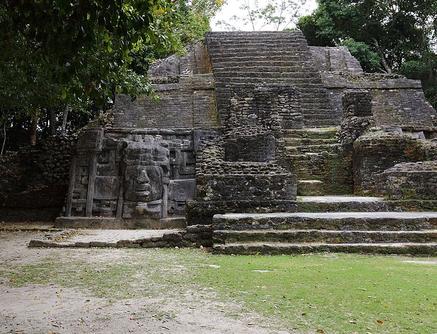 DESCRIPTION​
Lamanai (submerged crocodile), is one of the oldest, continuously inhabited archaeological zones in the Maya World. It is also one of a handful of Maya sites that have retained their original name. The archaeological park covers about 860 acres/384 hectares, and is the second largest site in Belize. Most of the site is unrestored and the trails lead over rainforest covered pyramids with howler monkeys roaring in the background. The main ceremonial structures, however, have been nicely restored.

The site lies along the west bank of the New River Lagoon, whose original Maya name may have been Dzuluinicob. The majority of visitors to the site take a water taxi from Orange Walk, or from the Tower Hill Toll Bridge. This is usually a 4 hour tour with half of it spent on the river. These are open sided boats and you are in a tropical rain forest, so plan on getting wet. A lunch is served upon arrival at the site, and then a tour is offered before returning.

For those who would like more time to visit the museum and to explore a little deeper, it is recommended to travel to the site by vehicle. This presents its own problems though, especially in the rainy season, as the route is along a gravel/dirt road. Four-wheel drive is recommended. Travel by vehicle can be made south from Orange Walk to the town of San Felipe, and from there to the site.

HISTORY AND EXPLORATION
Lamanai was first settled in the Early Pre-Classic (1000-800 B.C.), and was not abandoned until the late 1600’s. It was still occupied upon the arrival of the Spanish making it one of the longest settled sites in the Maya World.

The earliest monumental architecture began to appear in the Late Pre-Classic (300 B.C.-200 A.D.), mostly in the northern area of the site. These were mainly platforms with structures of a perishable nature built atop. During the transition into the Early Classic (200-600 A.D), larger masonry structures appeared. Most of the structures seen today range from the Early Classic into the Post Classic (900-1200 A.D), with some modifications taking place as late as the 1400’s. This would indicate that Lamanai was a flourishing city comparable to the northern Yucatan site of Mayapan when many of the other Classic era Maya sites were either experiencing a decline, or had been abandoned all together

Due to its strategic location along the New River, trade played a key role in the sites’ development.  Obsidian, jade, and cinnabar came down from the Guatemalan Highlands through the Peten, and salt, honey and cacao made its way in from the coast.

Another trade good appeared in the 12th century: copper and copper alloy ornaments. These items included bells, pins, tweezers, rings, chisels, and fish hooks. Most of this material has been found in the context of grave goods or in middens. Copper items are rarely found in the Maya area, and Lamanai holds the distinction of having the most copper artifacts recovered in the Maya World. It is thought that they were introduced from West Mexico as part of the broader trade network of which Lamanai played an important role. Some researchers believe that the Maya at Lamanai developed a process in which some of the accumulated items were melted, and then recast into new ornaments. If so, this would mark yet another technical advancement undertaken by the Maya.

Dozens of burials, and their attendant grave goods, have helped to illuminate the history of Lamanai. These grave goods include eccentric flints, ceramics, jade, shell, obsidian, remains of textiles, and most surprisingly, mercury. The mercury was found in an offering under the ball court marker in a lidded bowl, along with other items. This was the first time mercury had been discovered in the Maya Lowlands.

A number of beautifully carved stelae, along with other plain stelae and stonework containing glyphic information, have been recovered. Large quantities of colorful, stucco fragments have been documented from the fill of many of the later structures. The site must have been wonderful to behold in its prime.

The Spanish arrived in the area around 1554. They built two churches using cut stone from the existing Maya structures, a common practice at the time. There was an uprising by the suppressed Maya in the 1640’s, and the church was burned. The ruins of the church are still visible. The site was eventually abandoned by the end of the century.

A sugar mill was built at the southern end of the site in the 1860’s, and was abandoned a few decades later. The ruins can be visited if you plan your time accordingly.

Lamanai was first explored and reported on by Thomas Gann in 1917, followed by Eric Thompson in the 1930’s. Major excavations and restoration commenced in 1974-1986 by David Pendergast of the Royal Ontario Museum. Consolidation and conservation work continue under the direction of Dr. Elizabeth Graham and Dr. Scott Simmons of the Lamanai Archaeological Project (LAP), overseen by Jamie Awe of the Belize Institute of Archaeology.

STRUCTURES
There are three main structural groups at Lamanai set around individual plazas. Other smaller groups and residential units spread out from the civic/ceremonial core, in all directions.

The Temple of the Masks, Structure N9-56, is in the northern most plaza complex. This area was the earliest settled beginning around 600 B.C. The pyramid rises off a platform base accessed from the plaza onto a wide terrace. There are two unrestored mounds atop the terrace that flank the main structure.

The Temple of the Masks rises off the platform base three tiers for a total height of about 56 feet/17 meters. The rear of the structure has not been restored. The pyramid faces to the west, and is close to the edge of the lagoon.

A central set of steps leads to a two-room temple on the first terrace. Flanking the temple is a stunning pair of huge, well preserved stucco masks, about 13 feet/4m in height featuring human/deity faces. The masks are made from carved blocks of limestone as opposed to the more conventional method of a build-up of worked stucco around a stone armature. They are crowned with a crocodile headdress, and were completed around 400 A.D.

A second stairway from behind the temple leads up to the summit. The summit is rather narrow, and has no trace of masonry stonework. A substructure dating to c.200 B.C. was found within the pyramid, and it too contained stucco masks. The design of these masks is very similar to, and contemporary with, those found at the site of Cerros about 45 miles/73kms to the northeast. Modifications of the pyramid continued into the 14th century.

Two tombs have been discovered in the Temple of the Masks complex. The first was found within the main structure itself, and contained a male occupant surrounded by jade, shell, and other items of a perishable nature. The second tomb was located within a subsidiary structure on the Mask platform terrace, and was that of a female. They both date from around 500 A.D. Numerous remains of effigy censers similar to those found at the site of Mayapan have been found on and in front of the pyramid.

A two-tier platform of about 8 feet/2.5 m in height is located on the north side of the Temple of the Masks plaza.  The other structures surrounding the plaza have received less attention, and remain covered in vegetation. Two large platforms, including P9-25, along with groups of smaller residential and ceremonial platforms, exist further to the north. Beyond these are the telltale signs of raised fields used for agriculture.

The impressive Great/High Temple, Structure N10-43, is located in the central plaza complex. This is the highest pyramidal structure at the site at 108 feet/33 meters, about the height of a modern 10-storey building. It is located on the north side of the plaza. Three stairways lead to a platform terrace with the central stairway being wider. In between the stairs are found two large stone masks. The platform exhibits some nice rounded corners. A structure extends across the terrace in front of the central stairway.

From the terrace level a central stairway continues to the top with a further 4 masks flanking the stairs. Other masks may have been once present, but the upper level surface of the pyramid is quite eroded. It is thought that the side stairways extend up to the summit as well. There are three temple structures atop the summit. The central temple is the largest, and excavation has revealed remains of a large mask. The adjoining temples face inward towards the central temple, a common Maya arrangement.

The first phase of this structure dates to around 100 B.C/100 A.D. Several offerings have been recovered including jade and shell featuring Olmec style characteristics.

A rather small ball court is also located in the central complex, and has a late date from the 10th century. A dedicatory ceramic offering of a lidded ceramic vessel was found beneath a ball court marker containing miniature vessels holding ceramic, shell, jade, and cinnabar, all floating on a small pool of mercury. A significant discovery.

Across from the ballcourt on the east fringe of the plaza is the Temple of the Stela, N10-27. In front of this structure a finely carved stela, Stela 9 was discovered. It commemorates a tun ending event of ruler Smoking Shell in 9.9.12.0.0, March 10, 625 A.D. A carved representation of the ruler occupies the central portion of the stela. He clutches a ceremonial bar across his chest, and wears a pectoral of the sun god. The text records his accession, the tun period completion, and other historical information.

Beneath the stela platform base a number of offerings were found. These included chert blades, shell beads, obsidian, and the skeletons of five or more children. A puzzling find.

A large, circular altar measuring 6.5 feet/2m across has been discovered within the central plaza, similar in size to those seen at Piedras Negras in Guatemala. Unfortunately, as in Piedras Negras, the informative text and carved design has been severely eroded through the passage of time. There are several other structures here, mostly being jungle-covered mounds.

The Temple of the Jaguar, N10-9, is located in the southern complex. This pyramidal structure rises up on seven levels set upon a platform base to a height of about 96 feet/29 m. A broad, central stairway leads up to the platform terrace. A small rectangular construction is positioned in the middle of the stairway. There are two jaguar masks that flank the lower platform stairway. Only the front of this north-facing structure has been fully excavated and restored.

The central stairway of the pyramid continues up to a terrace interspersed by a small, single chambered structure. The terrace itself houses a large, two chambered, rectangular structure. A further stairway leads to a leveled summit. Numerous offering caches have been discovered within the structure. One of these contained a large, mosaic jade mask featuring teeth and eyes of pearlescent shell, and pupils of obsidian.

On the north side of the plaza is found the Palace Group, also known as N-3 or Ottawa, a large residential/civic complex. It consists of several platforms containing a number of structures arranged around an interior plaza and courtyards. These structures once had higher walls and flat roofs of timber and adobe construction.

The main structure here is Structure N-15. Its two-tiered platform rises nearly 9 feet/2.7m off the plaza floor, and is shared with Structures N10-18 and N10-77 which together form a U-shaped complex. A central stairway 26 feet/8m wide leads up to several interconnecting structures that were remodeled and expanded over a number of centuries. A number of dedicatory caches have been uncovered, mostly below doorways and steps.

Other mounds that surround the plaza have been partially excavated while others remain jungle covered. This is a most enjoyable site to visit. 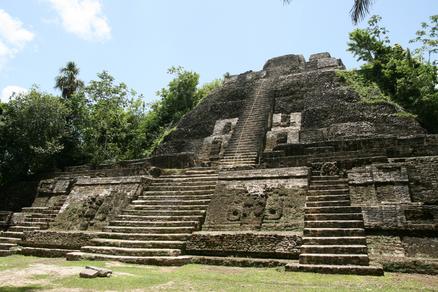 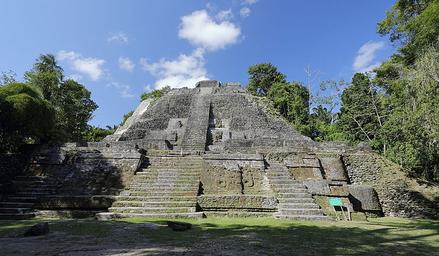 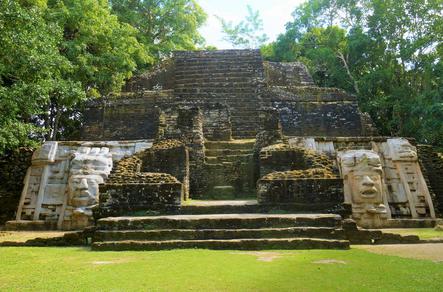 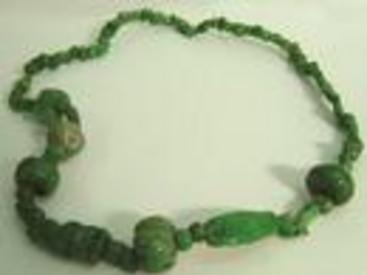 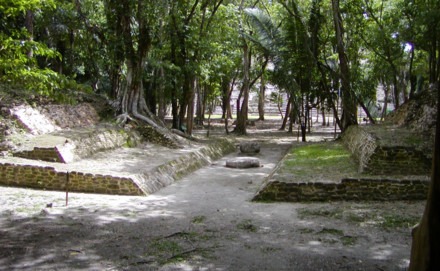 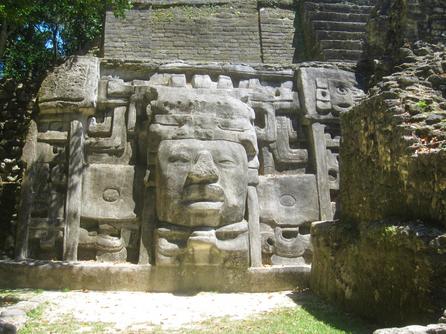 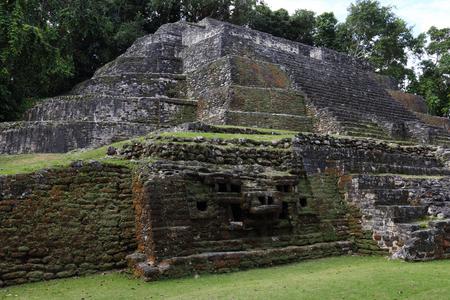 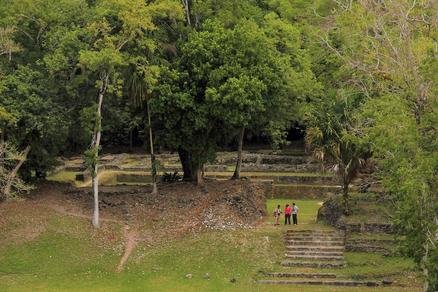 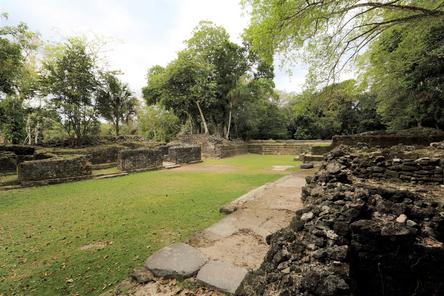 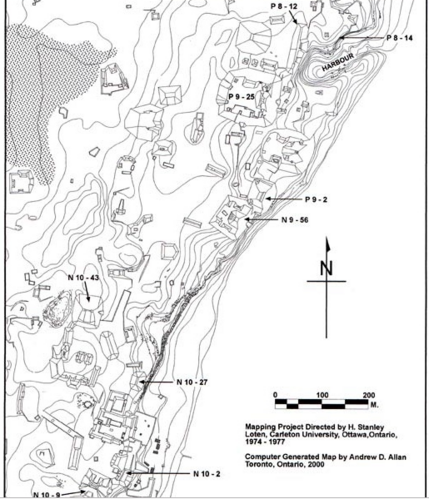 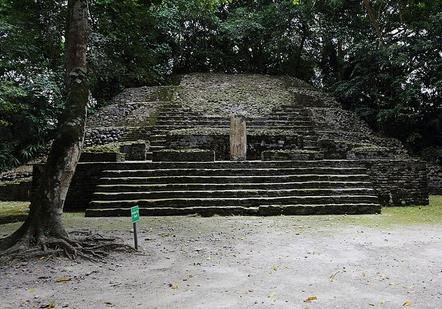 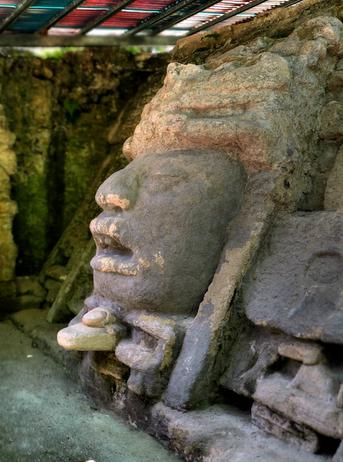 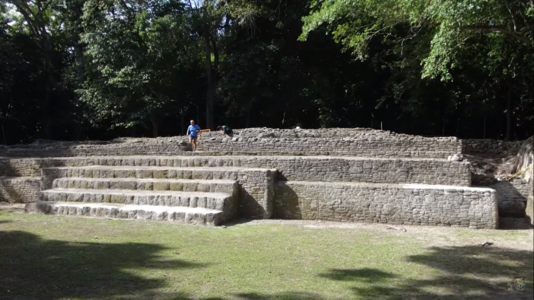 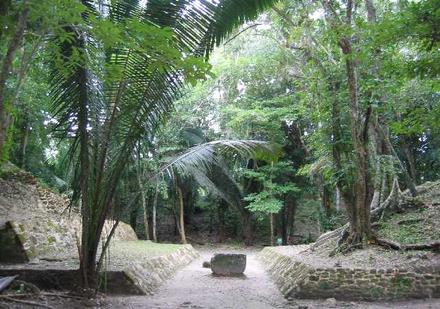 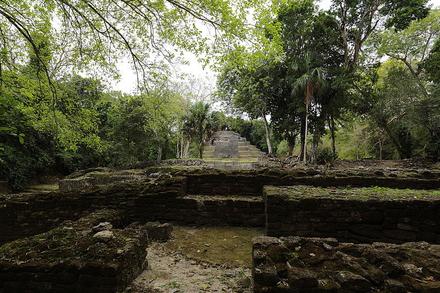 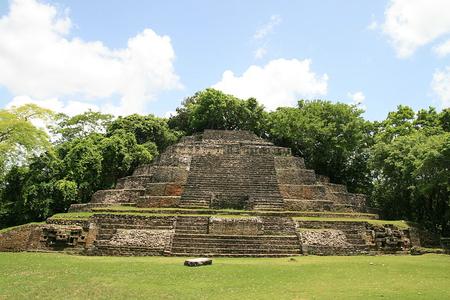 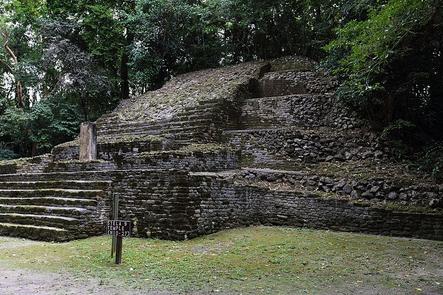 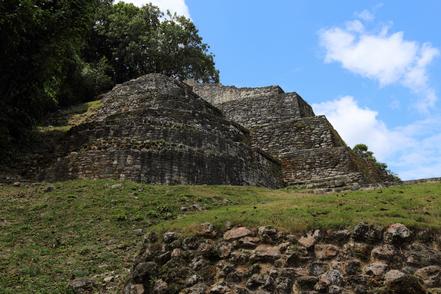 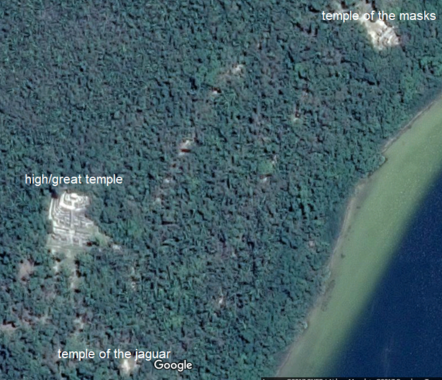