DESCRIPTION
Iximche is a late Post Classic (1250-1525) capital of the Kaqchikel Maya. Its name means “Place of the Maize/Ramon tree”. It is located in the Central Guatemalan Highlands at an elevation of around 7,4723 feet/2,277 meters. In common with other Highland Postclassic sites, it is defensively situated on a modified plateau surrounded by deep ravines.

The site is a well-planned urban center featuring six plazas and over 170 structures set on an NW/SE axis. Most of the structures at the site possess finely worked masonry and exhibit a Central Mexico Talud-Tablero style.  The construction techniques and the ceramics recovered are similar to those observed at the sites of Zacelau and Mixco Viejo.

Iximché is located in the municipality of Tecpán, in Chimaltenango Department, 25 miles/40 km from the departmental capital, and 56 miles/91 km from Guatemala City. From the Capital take Highway CA1, driving to western Guatemala through Chimaltenango. Once in the town of Tecpán follow the main road southwest out of town for 2.5 miles/3.8 kilometers until you reach the archaeological site. The site today is considered a pilgrimage/ceremonial site for many Maya, inculding shamans and aj q’ijab/daykeepers.

HISTORY AND EXPLORATION
Ceramic evidence points to a minor presence back to the Late Pre-Classic (300 B.C-250 A.D). The history of the site as it is seen today, while brief, is well documented as the site was a thriving city at the time of the Spanish onslaught. A Colonial document, The Annals of the Cakchikuels, provides a written history of the Kaqchikel people from their beginnings through the Spanish conquest. Spanish chronicles also provide information about the site. One of the most important sources of Mayan theology, and history of the K’iche, a related group, comes from the 16th century book, Popol Vuh.

The Kaqchikel were in an alliance with, and subordinate to, the neighboring K’iche Kingdom. After disagreements with these K’iche lords, the Kaqchikel left the K’iche capital of Q’umarkaj and founded their own capital and Kingdom at Iximche in 1470.

Iximche was administered by four clan leaders, with the two senior clan lineage leaders acting as co-rulers. The first among equals was a lord of the Sotz’il clan, Hun-Toh. The second co-ruler was Wuqu Batz of the Xahil clan. The other two lesser clans were the K’alel Achi and Ahuchan.

Iximche was first reported on by the soldier-chronicler Bernal Diaz del Castillo in1526, and later published in his memoirs. Francisci de Fuentes y Guzman wrote an informative report in 1690. The next visitors of note were that dynamic duo of John L. Stephens and Frederick Catherwood in 1840. Next came Alfred Maudslay in1887. Modern research began in 1956 under Janos de Szecsy followed by George Guillemin in a multi-year investigation from 1959-1972. Restorations and consolidations have continued.

STRUCTURES
Iximche is made up of six plazas that contain one or more pyramids, altars, sub-plazas, courtyards, and numerous raised platforms for residences and civic/ceremonial structures. Two of these plazas also have a ballcourt. It would seem that each plaza formed an individual complex that was devoted to one of the clans that administered the city. The streets linking each plaza were well-defined. A moat at one time bisected the city that was utilized for drainage and defense. There are two structural groups that may have been of a communal nature, and several small residential areas and complexes that developed as the city grew.

The pyramidal structures were of a rubble core finished with well-cut ashlar stone facades covered with a stucco coating, some of which remains. Both the central stairways and the corners were inset, a trait common to the Central Guatemala Highlands. The temples atop the pyramids were composed of adobe walls, with some stone columns, and wood beam roofs. The exterior and interior walls were covered with brightly painted murals, little of which survives today. Many of these structures exhibit multiple construction phases, as was typical with the Maya.

The other civic, administrative, religious and residential areas were all built atop raised platforms. These too had adobe wall and wood roofed structures which, unfortunately, have all been destroyed with the passage of time. Only their foundation outlines atop the solid stone platforms remain.

The first two structural groups seen upon entering the site are divided by the original entry pathway. These are called here the Northwest Group and the Northeast Group. The Northeast Group is bounded completely on the north side by a long mound 167 feet/51 meters in length. Its height is about 8-10 feet/2.5-3.75 meters. The plaza expands out from there 181 feet/55 meters. An unexcavated, small platform is in the center.

The Northwest Group has been considered by some to be a marketplace. It is composed of several sub-plazas that run the length of the entry pathway, and then on behind Ballcourt 1. Numerous raised platforms and small pyramid mounds are located here. The entry pathway itself ends at Structure 8/Ballcourt 1, in Plaza A.

Plaza A, along with Plaza B, is considered to have been the domain of the Sotz’il clan. Plaza A has two pyramidal structures, a ballcourt, and a number of platforms that once housed structures of a perishable nature. The main structure here is Structure 2.

Structure 2 is a multi-tiered pyramid with a single, inset, central stairway that leads up from the plaza. It has only been partially excavated and restored, with an original height of about 26 feet/8 meters. The temple atop the pyramid contained a large chamber entered through three doorways. Vivid murals once graced the columns and interior walls. A small shrine room was at the rear of the structure. A violent earthquake destroyed this temple in1976. It is located on the west side of the plaza.

In front of Structure 2 is a platform that may have been used in dance or ceremonial purposes. A cache of skulls was recovered from the structure leading some to compare it to the central Mexican skull platforms known as a Tzompantli. Immediately behind Structure 2 is a low mound wherein a significant burial, 27A, of an elite personage was found. This burial contained numerous items of obsidian, jade, shell, and gold reflecting the high degree of trade that Iximche engaged in.

Structure 3 is a pyramidal structure located across the plaza from Structure 2. It has been mostly excavated though not completely restored. It reaches a height of 23 feet/7 meters. A single chamber once crowned the summit. Fragments of two large incense burners were located here. In front of this structure are two small platforms and one circular altar.

The north side of the plaza is taken up by a long platform that houses Structures 22 and 23. The remains of these single-story structures indicate they may have been of a civic/administrative nature. Three sets of steps extend down to the plaza floor.

The ballcourt, Ballcourt 1, is located on the south side of the plaza. It incorporates closed end zones with elevated stairways upon both. While the adobe superstructures have collapsed, the ballcourt itself has been nicely restored. No markers or ballcourt rings have been discovered.

Plaza B is adjacent to Plaza A, and is entered from the northwest. It is in the shape of a squared horseshoe with the south side open. There are two principal structures here; Structure 1, and the Grand Palace.

The Grand Palace is built atop a large platform base, about 10 feet/3 meters in height, and is thought to have been the principle residential area of the Sotz’il clan. This area consists of eight interconnected courtyards that held twenty-five structures of a perishable nature. Sunken hearths and benches have been identified within the structures with altars in the center of the courtyards. The residential area was increased over time as the city grew, and is located on the east side of the plaza. Its final area has been calculated at 32,292 sq feet/3,000 sq meters.

Structure 1 is a fully restored, truncated, stepped pyramid. A central stairway leads up from the plaza to a small raised platform that most likely held a temple structure now disintegrated.  Its height is 16 feet/5 meters, and is located on the southwest corner of the plaza.

Structure 13 is next to Structure 1 and is a large platform accessed by a single, central stairway. Both these structures have their back to Plaza A.

On the opposite side of the plaza are found Structures 9 and 10, both sharing the same platform base, and believed to have been of a civic/administrative nature. A circular altar is located in the center of the plaza. Backing onto Structures 9, 10 and the Grand Palace, is Plaza C.

Plaza C is thought to have been under the control of the Xajil clan. It combines the structural components found in Plazas A and B, and is the largest plaza at the site.

There are three pyramidal structures, Structures 4-6, that ring the plaza. They are about 20-26 feet/6-8 meters in height, and all have inset corners and central, recessed stairways that face onto the plaza. Structure 4 shows the most restoration work, though none of the summits that once held a temple structure have been restored.

Structure 7 is similar in design to Ballcourt 1. It has been mostly excavated, though the playing field has not been cleared. No ballcourt markers or rings have been recovered.

The southeast corner of the plaza is taken up by a large residential area called the Small Palace/Grand Palace II, and is similar in layout to the Grand Palace in Plaza B. There are a number of low platforms that surround sunken courtyards and which once housed nineteen adobe structures. The remains of an altar are located within each courtyard.

The north side of Plaza C is taken up by a long, low platform, Structure 38, that measures about 198 feet/61 meters in length. It once incorporated three structures of a perishable material, with each structure having its own set of steps to the plaza. These structures may have functioned in a similar civic/administrative manner as Structures 22 and 23 in Plaza A.

Plazas D-F contain mostly smaller, unexcavated mounds and are similar in layout to the preceding plazas. Plaza D has been cleared of the forest and undergrowth. Plaza F is the farthest from the entrance, and contains a small, partially excavated structure that is used by modern K’iche Maya for ceremonial purposes. There are some smaller groups of residential/ceremonial areas that hug the edges of the plateau, especially on the south side. 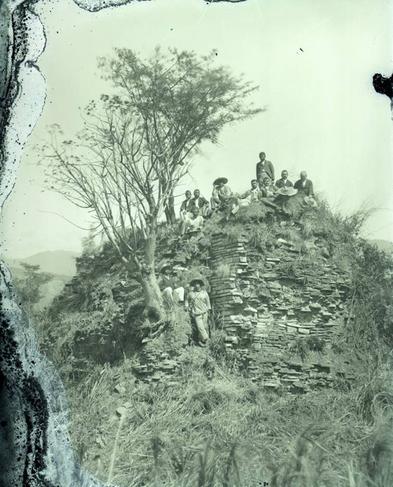 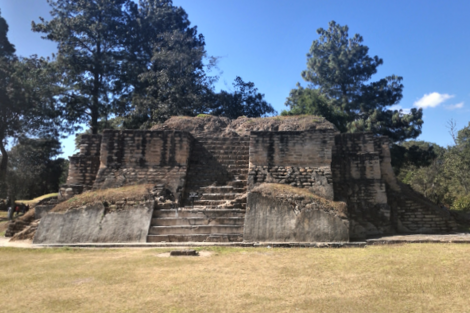 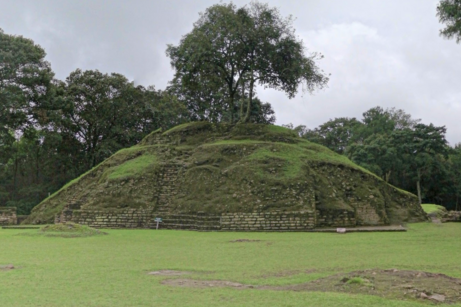 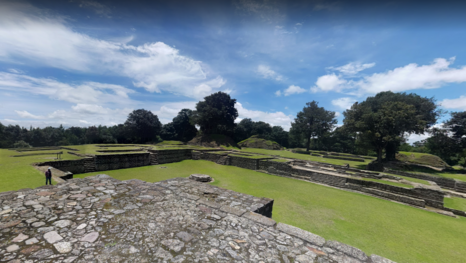 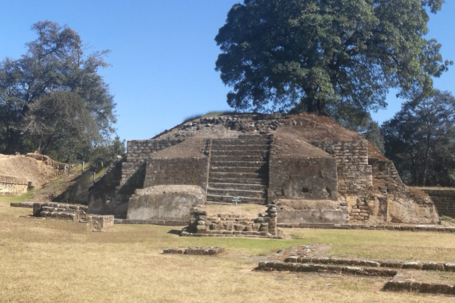 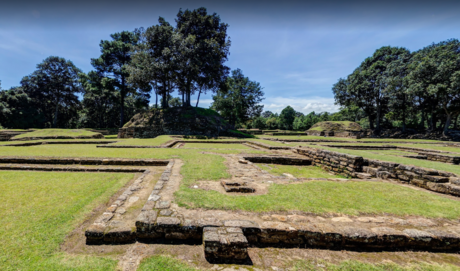 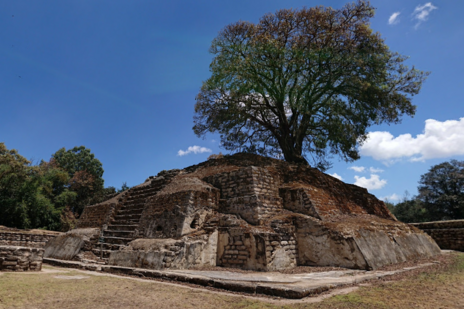 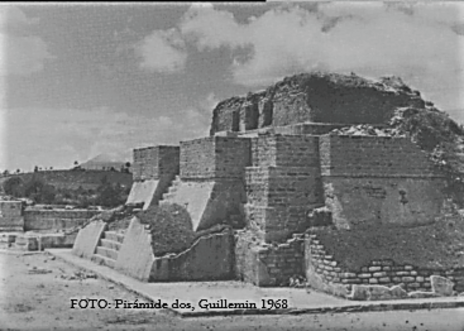 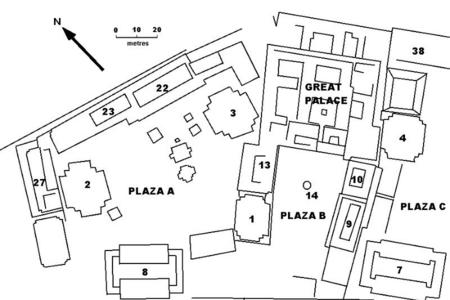 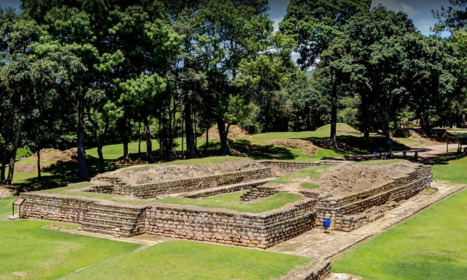 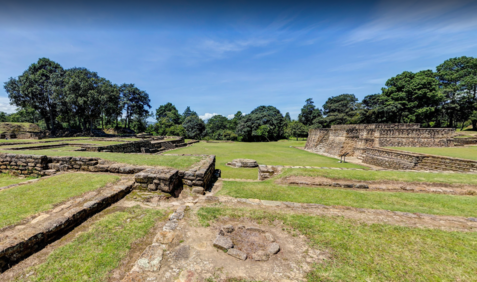 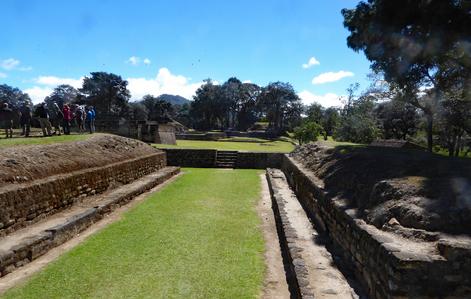 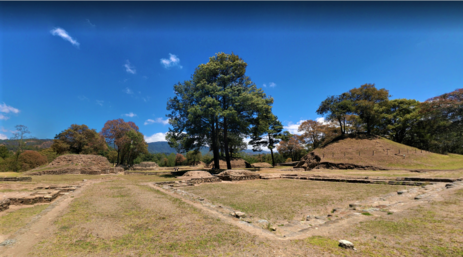 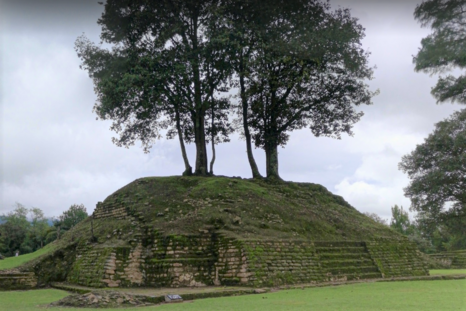 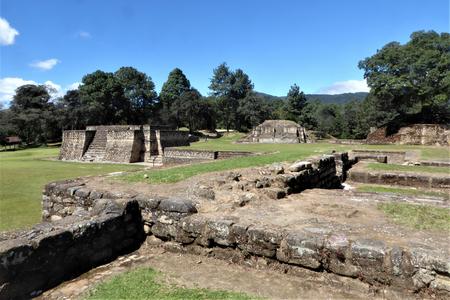 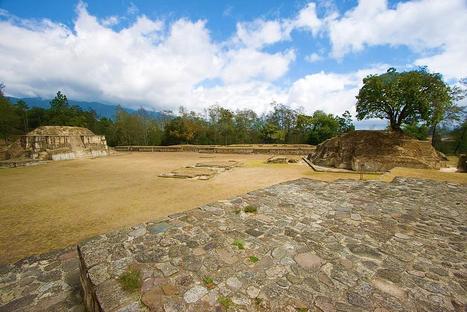 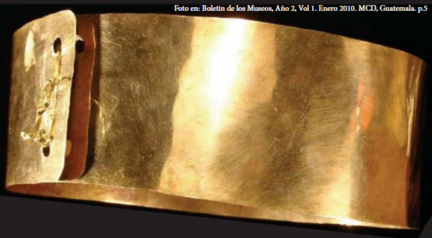 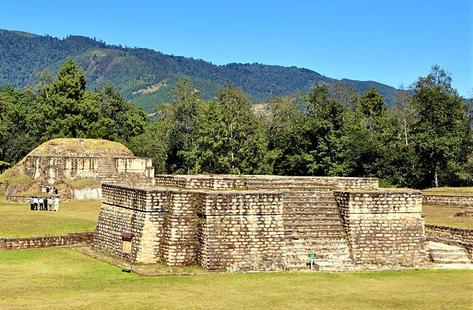 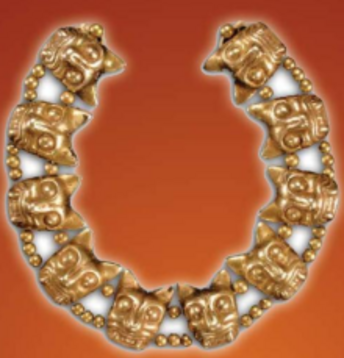 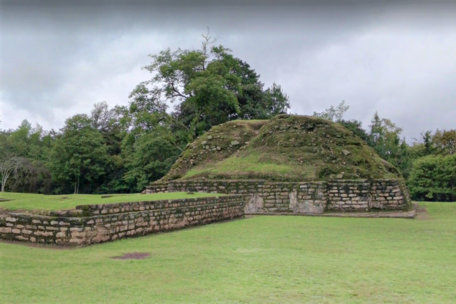 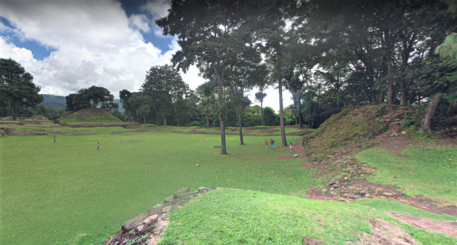 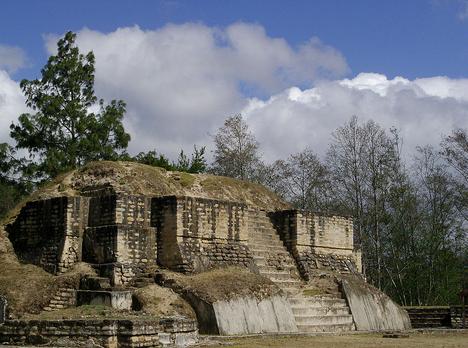 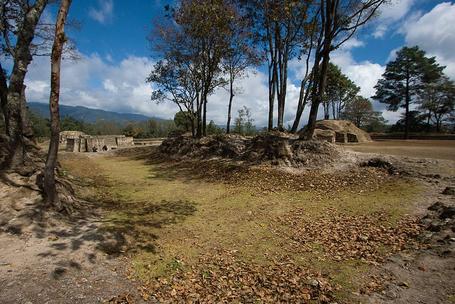 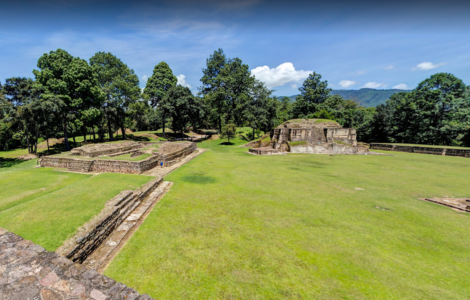 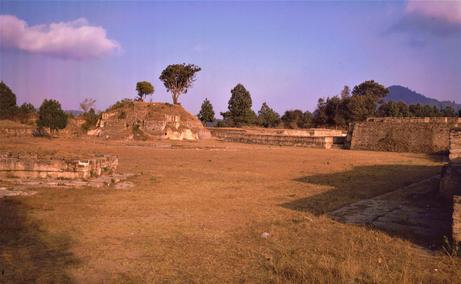 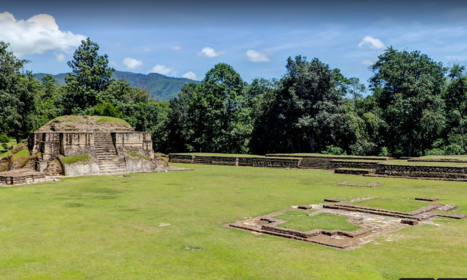 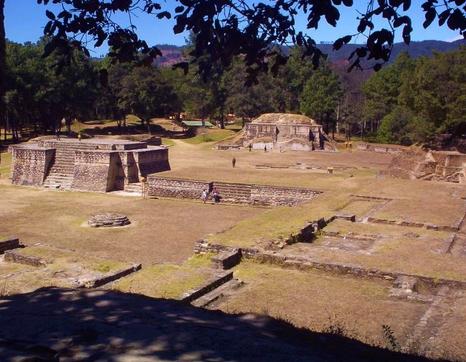 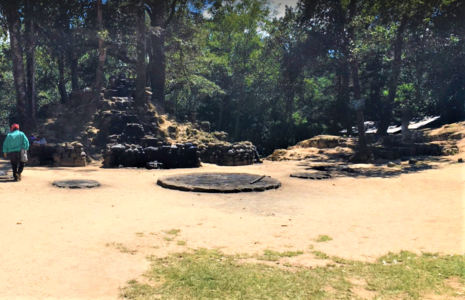