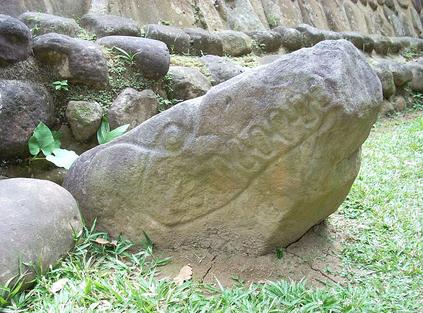 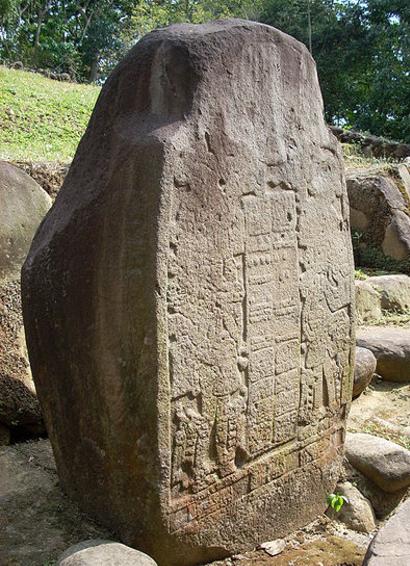 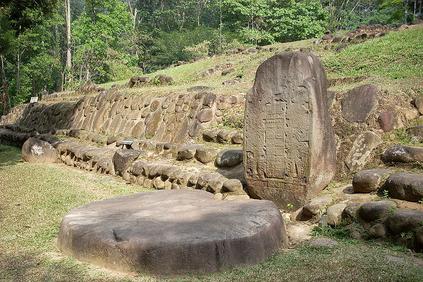 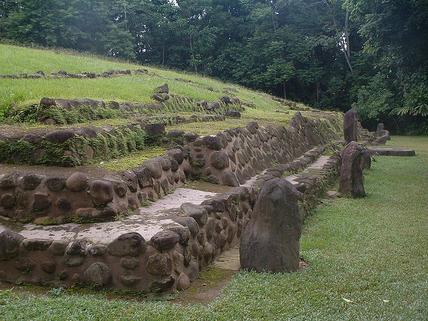 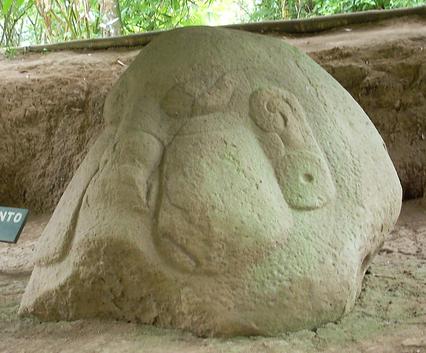 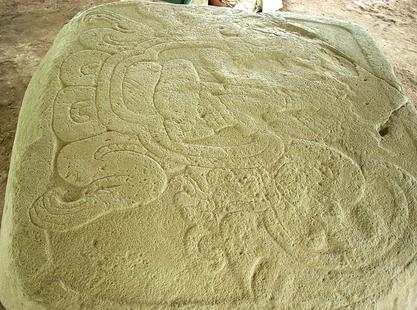 DESCRIPTION
Tak’alik  Ab’aj, “Standing Stone”, is an Early Pre-Classic archaeological zone (1,000-800 B.C.), with a long history that extends into the Post Classic (900-1200 A.D.). The site is important in that its history shows an apparent transition from an Olmec influenced culture to the Maya culture, as shown through its monuments and architectural styles. Its ancient name may have been Kooja.

The site sits along the Pacific Slope and was an integral part of an early trade network that connected the Olmec center of La Venta on the Gulf coast to Pacific Slope sites on down to Chalchuapa in El Salvador, and up into the Guatemalan Highlands. There is also evidence of contact with Teotihuacan in Central Mexico.

The Pacific Slope is a wide stretch of extremely fertile land that lies between the Sierra Madre and the Pacific Ocean. This was one of the principal cacao producing areas which was a highly sought after commodity. Not only was cacao a very important ritual beverage of the elite, its seeds were also one of the earliest mediums of exchange, and which remained in use until the end of the 19th century A.D. Obsidian, finished ceramics, salt, and maize were also important trade commodities.

Tak’alik Abaj has the largest collection of Olmec style sculpture outside of the Olmec Gulf Coast homeland. It is a medium size city consisting of four main architectural groups built upon 9 terraces and containing over 70 structures and 200 stone sculptures, along with numerous stelae, altars, and tombs. In addition, 6 exquisite jade mosaic funerary masks have been recovered. There is an advanced drainage system dating back to the Pre Classic.

Tak’alik Abaj is located off Coastal Highway 10 at the turn-off to the town of El Asinta, and can be reached traveling from Guatemala City down Highway 9 about 120 miles/192 kms.

HISTORY AND EXPLORATION
Early settlement of Tak’alik Ab’aj has been detected back to the Early Pre Classic (1000-800 B.C.). During the Middle Pre Classic (800-300 B.C.) the area was strongly influenced by the Gulf Coast Olmec centers of San Lorenzo and La Venta. Intricately carved sculptures in the Olmec style began to appear all along the Pacific Slope coast as far south as Chalchupa in El Salvador. The majority of these are located in Tak’alik Ab’aj, with others located at the sites of El Baul and Bilbao. The first monumental construction began at the site during this time.

The site experienced continued development and expansion with some of the first traces of early Maya cultural development displayed starting around 400 B.C. It reached its zenith during the Late Pre Classic (300 B.C-200 A.D.) as an important trade center, and the city grew in size to cover about 1.5 sq miles/4 sq kms. The site features some of the earliest dated stelae and glyphic writing found in the Maya World. Some of the stone sculptures excavated here have similarities to those found across the border at Izapa.

The Early Classic (200-400 A.D.)  saw an intruding influence brought on by  contact with the great Central Mexican center of Teotihuacan. Building activities declined. Trade routes gravitated to the Guatemalan Highlands.

Building activity resumed at the beginning of the Late Classic (600-900 A.D.). The site then began to experience the same decline as other Southern Maya centers towards the end of this period.

During the Post Classic (900-1200 A.D.) the site was strongly influenced by the Ki’che’ Maya from the Guatemalan Highlands, and may have been conquered by them. There is no dynastic history or deciphered rulers names recovered from the site so far.

The first reference to the site was made by Gustav Bruhl in 1888. A study of the sculptures was made in 1902 by Walter Lehmann. Eric Thompson undertook an examination of the site on behalf of the Carnegie Institution in 1942. Current investigations are being led by the government of Guatemala with newly located sculptures continuing to being uncovered.

STRUCTURES
During Tak’lik Ab’aj’s history most of the structures were built of earth and clay with some of them being clad in stone. The site consists of four main groups clustered around 12 plazas and built upon 9 terraces, some natural and some man-made.

The Central group appears to have been the center of the site. There are five man-made terraces located here that support 39 Middle and Late Pre classic structures built around central plazas. An early ball court with a north/south orientation has been discovered here. Altar 48 is an important early example of Maya sculpture and dates to 400-200 B.C.

Structure 7 is a large platform fronting the east side of the plaza and is considered the most important and sacred structure of the Central Group. There are two smaller structures, 7A and 7B, located on the platform in addition to three rows of monuments that may have had an astronomical bearing. During the Late Classic these structures were clad in stone. Excavations have revealed an underlying ceremonial platform known as the Pink Structure. This has been associated with Olmec influence at the site. A royal tomb was discovered within Structure 7A along with a large cache of ceramic offerings. One of the more interesting artifacts recovered here is an intricately decorated censer known as “La Nina”.

There are a numerous stone sculptures, altars, and stelae located in the Central Group.  Structure 5 is a pyramidal structure, and Structure 6 is a stepped platform. Structure 12 on Terrace 2 is a 16 foot/5m high three tiered platform containing 2 wide stairways. In front of the west façade of this structure is Stela 5 the most important stela at the site. It features two kings possibly recording a succession ritual. They are separated by a central panel containing two dates, one associated with each ruler. The right-hand date refers to 8.2.2.10.5, August 21, 83 A.D., a very early Maya date, and possibly the date of accession of this king. The left-hand date reads 8.4.5.17.11, and equates to June 6, 126 A.D., the date of possible succession. If this is indeed the case, it is a rare, early example of Maya kingship ritual.

The West Group is located in the city’s core area and consists of 21 structures arranged around open sided plazas containing numerous stone sculptures. This area was occupied from the Late Pre Classic through the Late Classic. Jade funerary masks were discovered here. Structure 86 is a sunken patio, and dates to the Early Classic. Many ceramic offerings were deposited here.

The North Group is also located within the city’s core area and has been dated from the Late Classic to the Post Classic, and shows Highland Ki’che’ ceramic influence and occupation. Terrace 9 is located here and is the largest at the site measuring 1,300 feet/400 m x 980 feet/300m. A second ball court with an east/west orientation is located here.

The South Group is located outside the core area. It is comprised of 13 structures. Little information has been published regarding this group. ​ 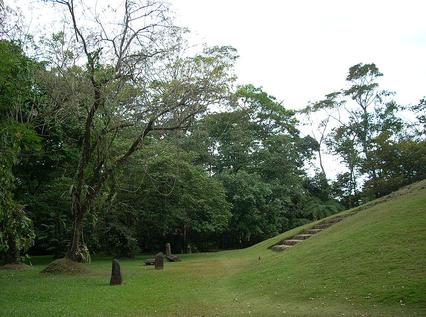 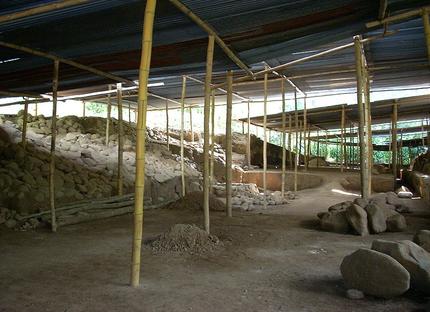 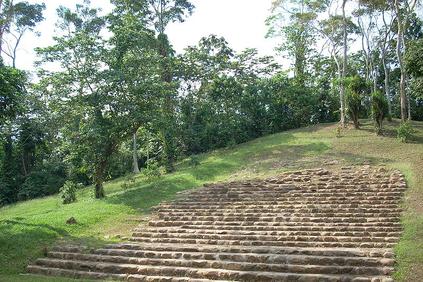 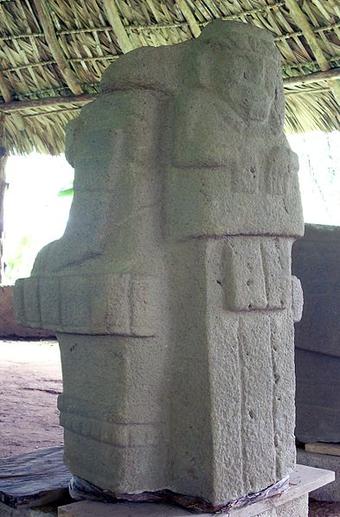 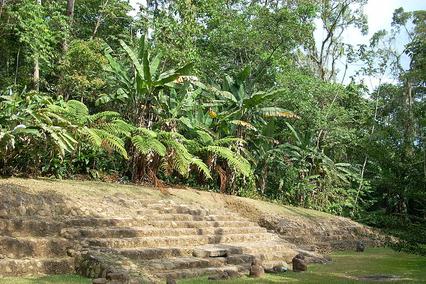