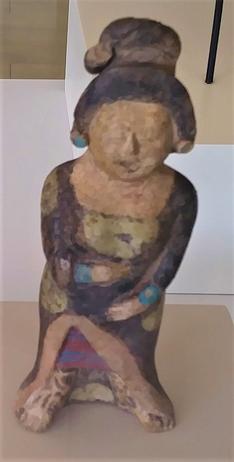 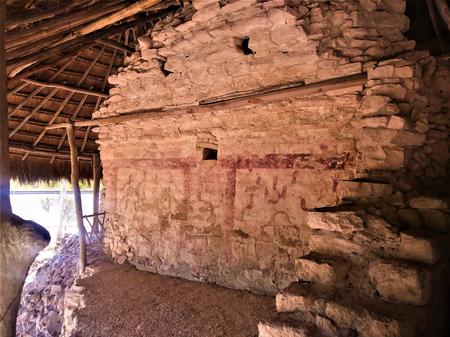 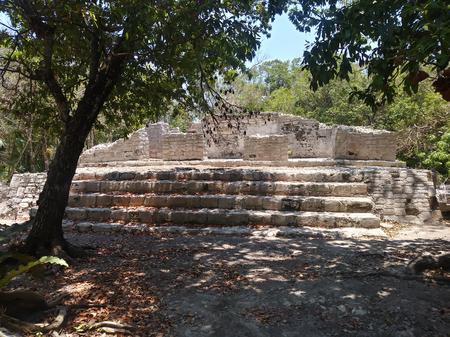 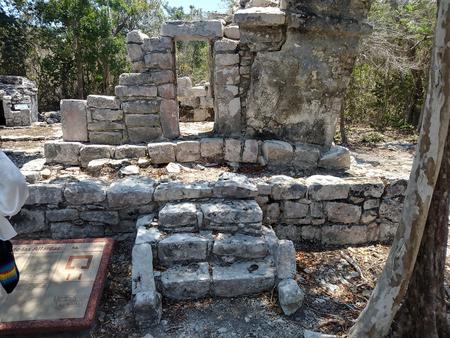 DESCRIPTION
​Xel Ha, Spring Water in Yucatek Maya, is a wonderful, seldom visited site across the highway from the better-known tourist resort of the same name. The site has a long settlement history dating from the Late Preclassic (300 BCE-250 CE) through the Post Classic (1150-1550 CE), and is most likely the pre-Hispanic site of Xala.  It served as an important port of trade and as a point of intercultural exchange for larger inland settlements such as Coba. It also was a major embarkation point for pilgrim access to the sacred shrine of Ix Chel on Cozumel Island.

The site consists of 4 main groups, of which two are open to visitors. It was chosen at a point on the Caribbean that offered an inlet into a sheltered lagoon on the east side, and a large fresh water cenote on the west side. The distance from the coastal structures to the cenote structures is about 1 mile/1.6 kms, though the core area is smaller and easily visited.

There are caves and underground rivers located here, both of which held important religious and mythological connotations for the Maya. The central area of the site is on a small rise of about 26 feet/8 meters above sea level. There are some nicely preserved murals accessible to visitors at the site.

Xel Ha is located along the Maya Riviera, a stretch of beautiful coastline on the Caribbean side of the Yucatan coast, just off Highway 307. It is about 8.5 miles/13.5 kms north of Tulum, and 27.5 miles/44kms south of Playa del Carmen, and directly across from the southern portion of Cozumel Island.

HISTORY AND EXPLORATION
An analysis of ceramics recovered from the site have helped to date the beginnings of the settlement to the Late Preclassic. Masonry structures began to appear in the Early Classic (250-600 CE), and exhibit a Tikal style of architecture. By the end of this period the site has established itself as an important trade port, with outside cultural influences manifested in its surviving murals. There have been no stelae (carved stone markers), hieroglyphic stairways, or other monuments to identify the rulers of the site, or its direct political/economic associations with other settlements.

A sacbe (raised white stone road) leads out from the major inland site of Coba in the general direction of Xel Ha which could have been its seaport. A search has turned up no published study to determine the final destination of this sacbe, though it would seem plausible that the site was integrated with Coba which is only 26 miles/42 km away.

Xel Ha was incorporated into the extensive trade route that connected Honduras around the Yucatan Peninsula to Veracruz on the Gulf of Mexico. It also was a principal point of embarkation to the important pilgrimage site of Ix Chel on the island of Cozumel. This distinction afforded it a favorable reputation as a destination to house, feed, and transport pilgrims, who journeyed from across the peninsula, to and from Cozumel.

The Late Classic (600-900 CE) was characterized with many of the earlier structures carefully covered over and new structures built on top of them. From the Terminal Classic (900-1150 CE) onward the site experienced a renaissance with new groups of structures constructed, many of them in the East Coast style as exemplified at the more renowned site of Tulum. The site was abandoned shortly after the Spanish conquest of the Yucatan.

Group A is located on the coastal side of the highway and is currently closed to visitors. It is a Post Classic group consisting of some low platforms and three small structures. A defensive wall has been reported on as well.

Group B forms the nucleus of the site, with most of the important structures located here. It comprises numerous structures and sub-groups, and straddles Highway 307, with only those areas on the west side of the highway open to the public.

The first sub-group seen upon entering the site is set around a courtyard featuring two structures. The south structure is a partially restored three-tiered platform. The north structure is a forest-covered mound. Both are about 8 feet/2.5 meters in height.

The most impressive structure is known as the House of the Birds/Parrots, and lies to the southeast of the rest of the group. This is a well-preserved residential type structure, and rests upon a raised, “L” shaped platform currently protected by a palapa roof. Interestingly, the main stairway faces to the south away from the other structures. It has three rooms in total with the two rooms containing the murals on an east-west axis, and the third room perpendicular on the west end. The west end room was later altered in the Post Classic to house a burial. The structure is less than 30 feet/10 meters from the main highway. During construction of the highway the northeast section of the structure platform was damaged. It has some outstanding preserved murals which date from the Early Classic. The murals are on the remaining partition wall of the palace.

Mural 1 faces the south side and consists of two panels separated by an Ahau (lord) glyph. The scenes comprise several red and yellow painted birds/parrots in different poses. There is a red border that encloses each scene.

Mural 2 is on the opposite side of the wall and has 4 panels. The western most panel exhibits a checkerboard design of red, yellow and grey squares. What may be interesting to note here is that the grey pigment that is visible today may have actually been of a plant or mineral based green color when first applied. A chemical reaction over the centuries could have caused this condition. Imagine how much more vibrant this would have originally appeared.  The second panel consists of three vertical, red columns.

The third panel is the main panel of the composition. It features an anthropomorphic figure from the chest up and painted in red, yellow and blue. The head is in a forward-facing position having an elaborate, feathered headdress. The figure has bracelets and a necklace, and is stylistically related to the great central Mexican city/sate of Teotihuacan, and may represent Tlaloc, the central Mexican god of rain and warfare. The fourth panel is too deteriorated to identify. On the west side of the room is a rather interesting doorway design.

The Lothrop Group dates from the Late Post Classic (1250-1550 A.D.) and is a short distance to the northeast from the House of Birds, and may have been part of a shared plaza. The group contains simple platforms and stairs which may have been used for ceremonial dance or other ritual.

A notable structure of Group B is Structure 136/El Palacio located to the west of the Lothrop Group. It faces North onto a large plaza, here called the Main Plaza, about 168 feet/ 51 meters square. The palace was an elite residential structure shaped in the form of a “T”, and displays numerous construction phases. The first phase was of a large rectangular base with rounded corners, sloped walls, and corbel vaulted ceilings housing two rooms reflecting an Early Classic style. Later additions added other rooms and hallways. It has a broad stairway that runs along its east facing length, and the principal stairway on the north side, with several small series of steps found around the structure. Late Post Classic construction covered the entire structure, and a residence or temple of perishable materials was built atop. The latter construction has been removed. The south side of the structure features an interesting sunken patio accessed by a single set of steps. Several column sections are located at the northwest corner of the structure. The remains of a long, low rubble mound are located on the west side of the plaza.

The other structure of note is called the Structure of the Pilasters, and is located on the north side of the Main Plaza. It is set on a low platform with the remains of eight pilasters that separated entry points into the structure, and was accessed by a single, central stairway. It could have been an elite residence or a civic/administrative center. This structure was also completely covered over in the Late Post Classic to form a base for structures of a perishable nature. This later construction has been removed as well. A sacbe about 26 feet/8 meters in width and .3 mile/.5 km in length leads out from the western side of the structure to Group C.

Group C straddles the sacbe that runs out from the Palace, and is set about a beautiful, fresh water cenote. The group dates from the Late Post Classic and has five temples built upon a shared platform forming a small plaza. These are some of the first structures that pilgrims and merchants would have encountered when entering the site. Its’ most important structure is the Jaguar Temple.

The Jaguar Temple has painted murals on both its interior and exterior walls, one of which features the image of the Diving Jaguar. The structure is entered between two columns forming three entrances. The entryway is a sort of portico that extends around an interior sanctuary. The exterior walls of the sanctuary show the remains of blue and red paint on the south wall, along with red handprints such as is seen at the site of San Gervasio across the water at Cozumel.

The depiction of the Diving Jaguar is found on the east wall. It has been covered over with a thin coat of protective stucco, and the image of the jaguar repainted for visitors to view. This image of a descending jaguar deviates from the more common image of the Diving God found at such sites as Tulum, Becan, Mayapan and Sayil, among other sites.

The four remaining structures are situated around the small plaza, and are considered small shrines. The south structure is intact, and exhibits remains of blue paint on its interior west wall. Additional scenes have been reported on the other walls. The west structure, House of the Alfardes,  is larger with a pronounced stairway exhibiting balustrades that terminate with identifiable serpent heads at its base.

The last group, Group D is located a little further to the west along the sacbe. It consists of six unrestored, structures, and is currently closed to the public. 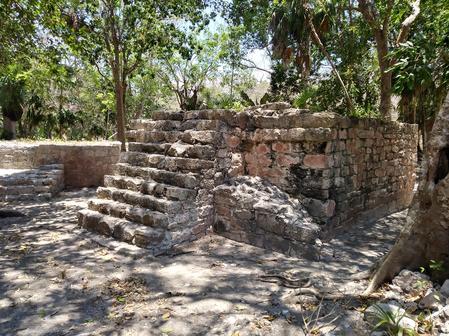 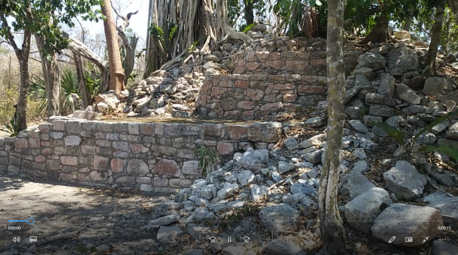 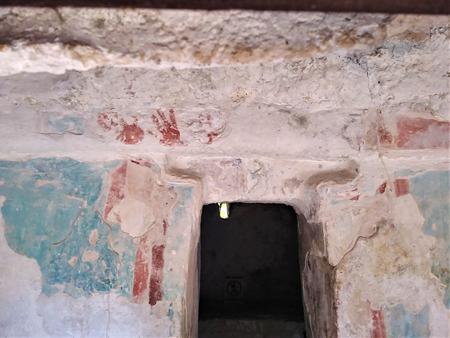 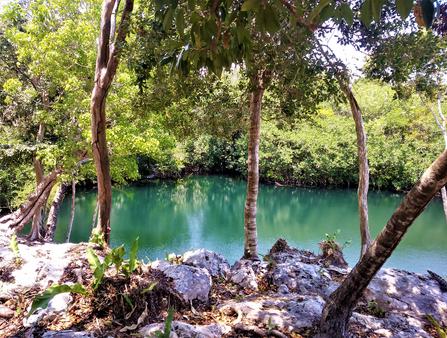 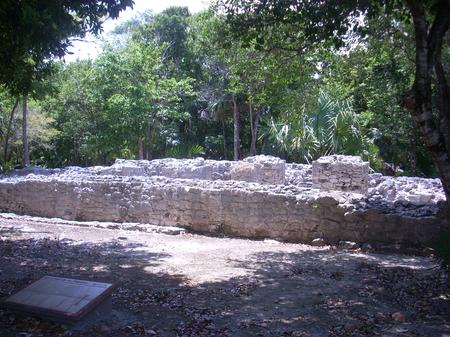 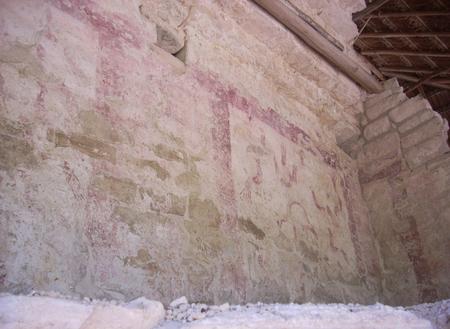 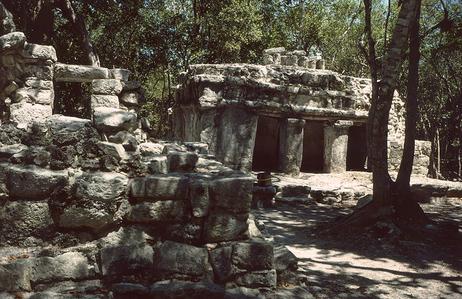 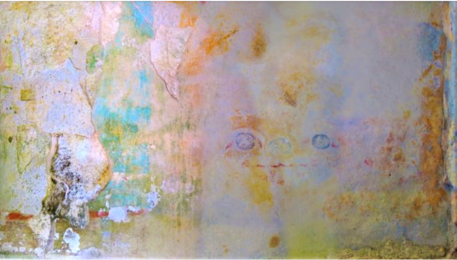 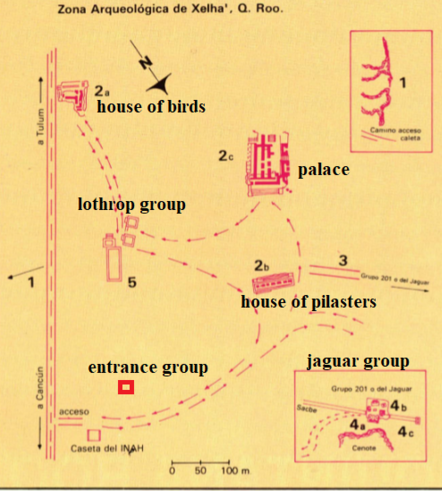 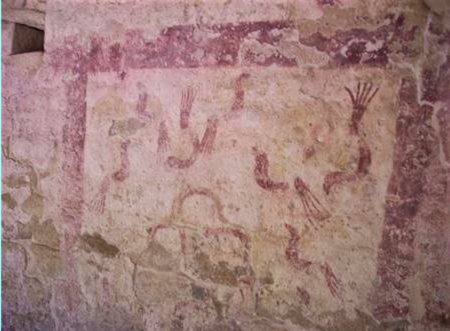 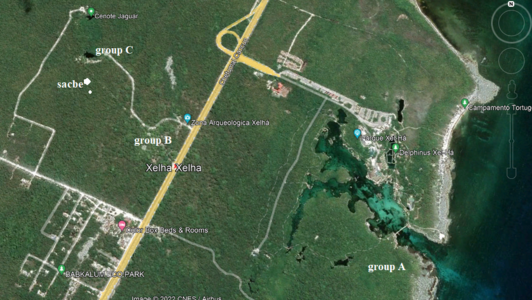 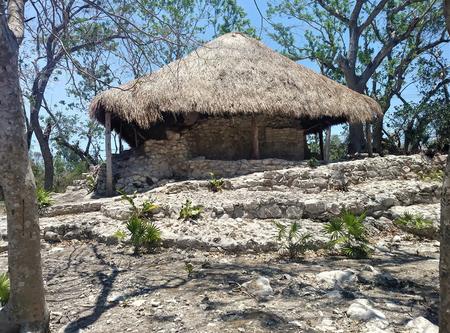 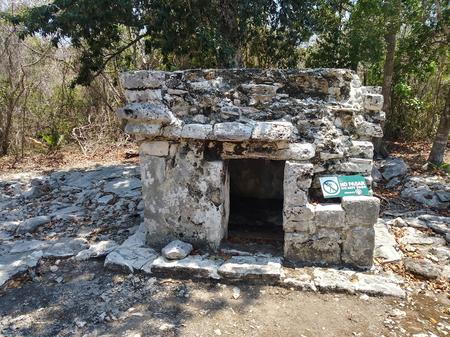 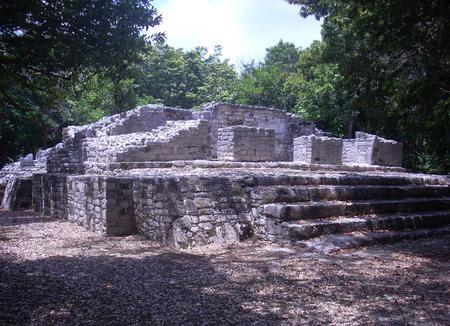 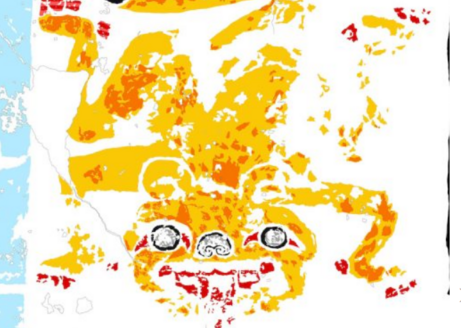 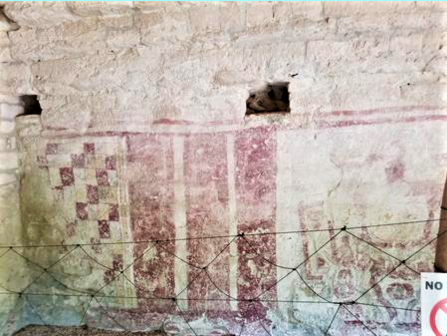 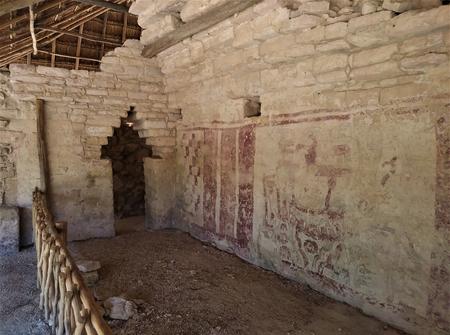 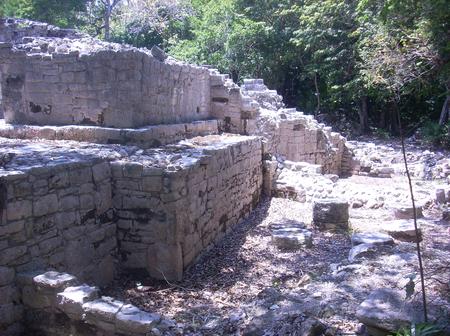 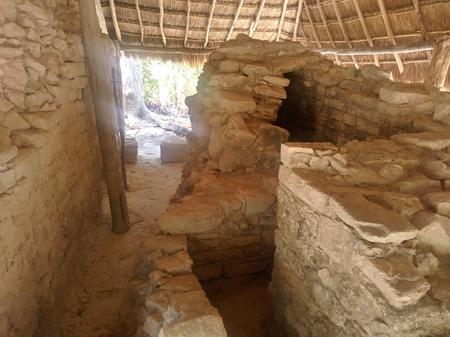 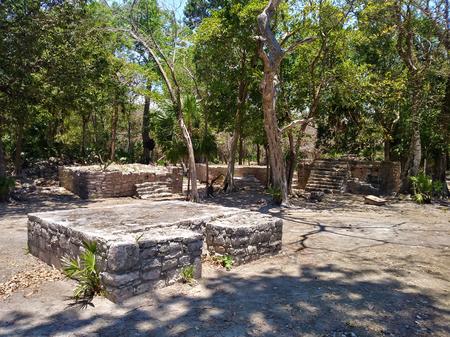 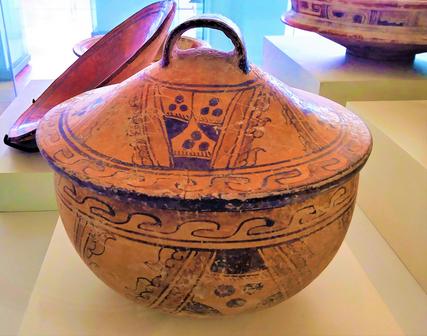 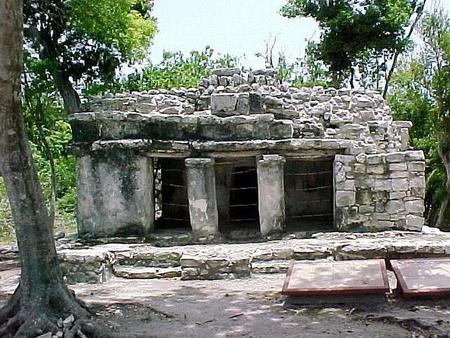 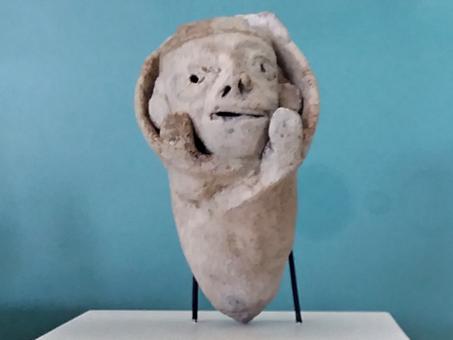 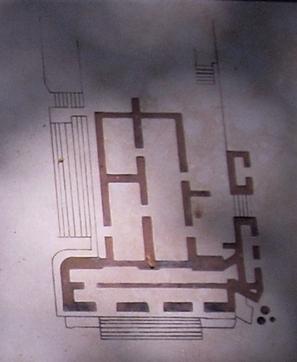 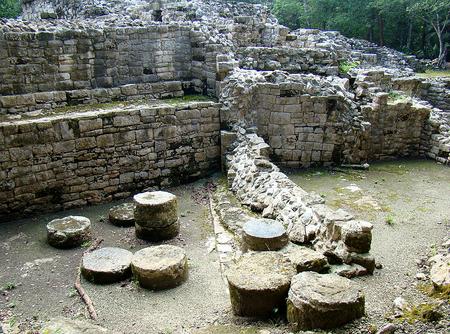