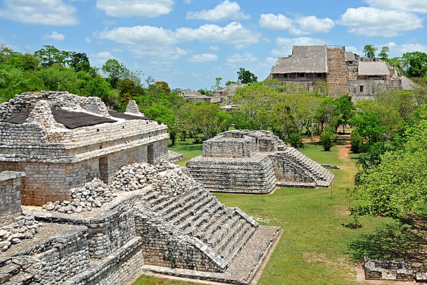 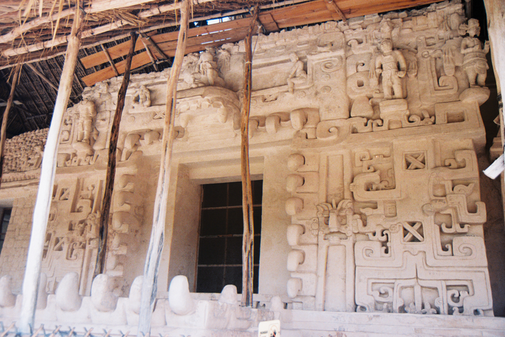 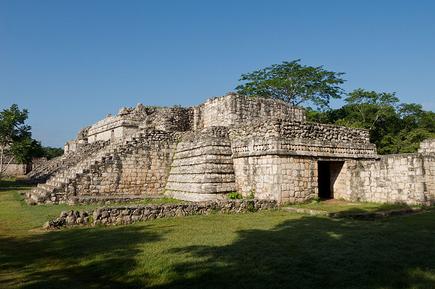 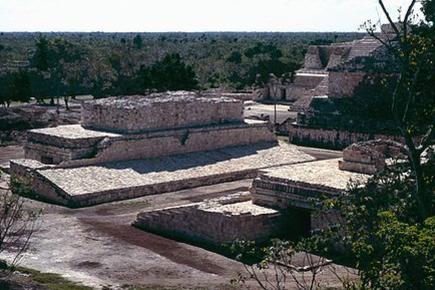 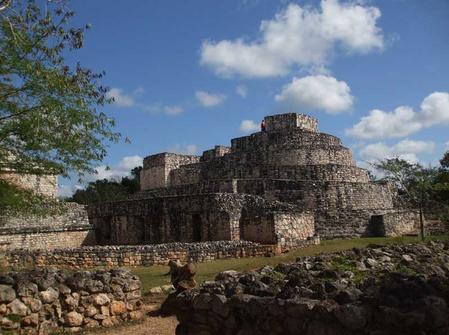 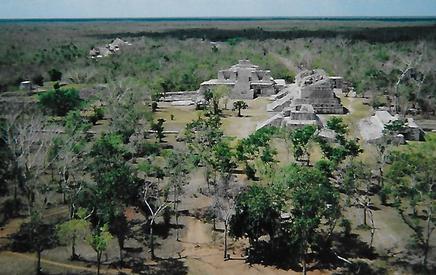 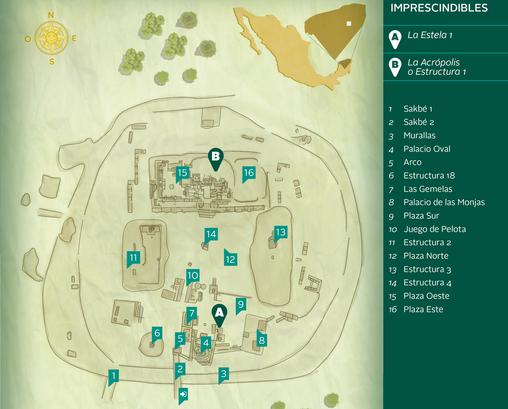 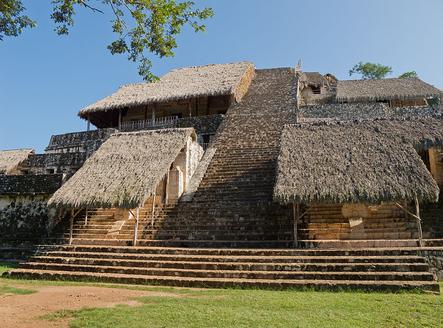 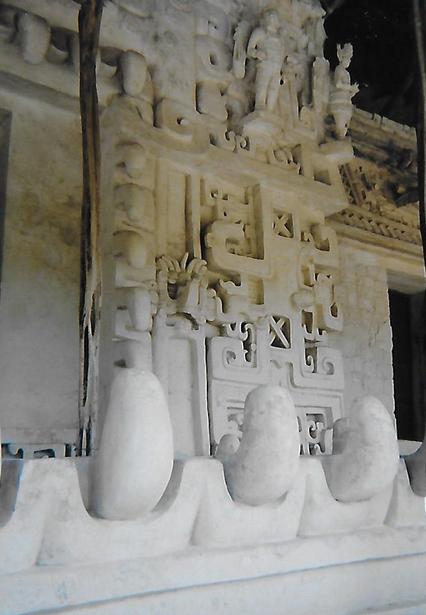 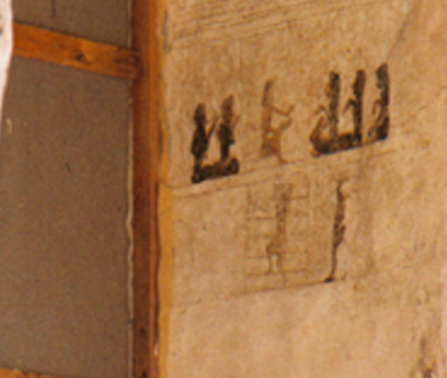 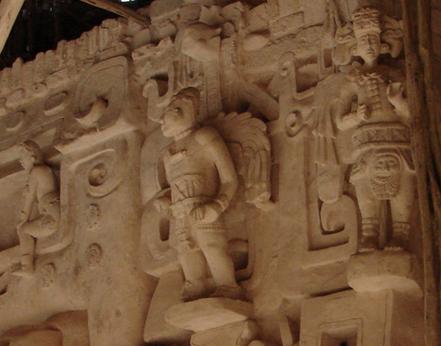 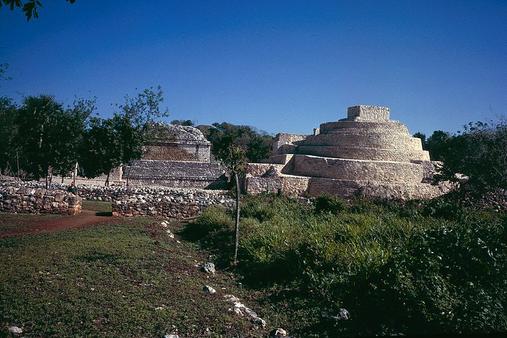 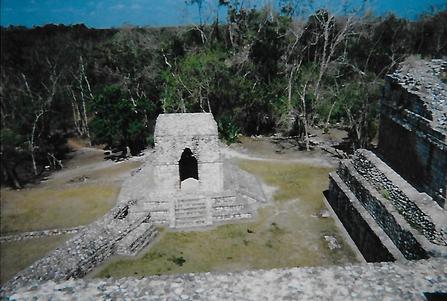 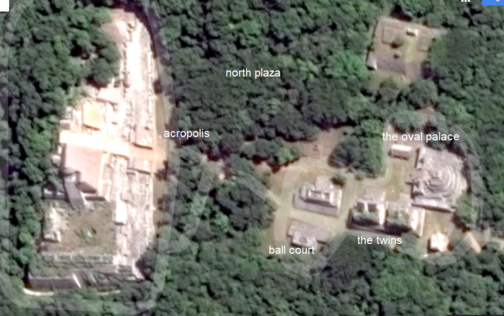 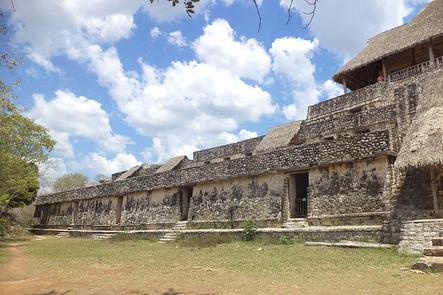 DESCRIPTION
Ek Balam is an exciting, medium sized archaeological zone. It dates from the Middle Pre-Classic (700-300 B.C) through to the Terminal Classic (900-1100 A.D.).The site is renowned for its depictions of “angels” adorning a stucco frieze. While the site encompasses an area of about 10 square miles/16 sq. kms, the walled core ceremonial/civic center is easily visited. There are at least 5 identified sacbeob (white stone causeways), one of which leads to a nicely restored entry arch. There are at least 2 defensive walls that surround portions of the site.

The site has been open to visitors only for a dozen years or so. It is located about 12 miles/19 kms north of Valladolid on Highway 295, then east on a marked secondary road.

HISTORY
Ek Balam, Black Jaguar, dates back to the Middle Pre-Classic (700-300 B.C) as indicated by pottery fragments found there. Most of its visible construction dates to its Late Classic heyday (600-900 A.D.). It was the capital of a Classic Period Kingdom known as Talol.  In the Terminal Classic(900-1100 A.D.) the name Ek Balam was used to either identify the site, or one of its rulers. The site then fell into a steep decline, and was eventually abandoned.

There are glyphic carvings and stelae (carved stone commemorative slabs) that provide a bit of the site’s history containing names of a series of rulers beginning with Ukit Kan Le'k Tok in 770 A.D. through Tz'ihb am Tuun in 841 A.D.

Ek Balam is first mentioned in a XVI century Spanish Colonial document entitled Relacion Geografica. The next report comes from Deserie Charnay who visited the site in the 1880's. It wasn't until the 1980's, a century later, that further explorations were undertaken by Bill Ringle and George Bey III. INAH has conducted ongoing excavation and restoration work since.

STRUCTURES
There are over 40 structures within the walled enclosures. These structures are laid out on an north/south axis forming two plazas, the North Plaza and the South Plaza.

On the north end of the North Plaza is located the most noteworthy structure at the site known as the Acropolis. This imposing structure is 480 feet/127 meters long and over 90 feet/30 meters in height. It contains a number of structures superimposed over each other in successive construction phases as was common at the time. It contains numerous rooms, passageways, courtyards, temples and stairways across six levels.

A massive, central stairway leads up from the south side of the Acropolis directly to its summit. Situated on this stairway are two monuments that feature serpent heads with extended tongues, the whole covered with glyphic inscriptions.

On the fourth level is a self-contained structure unparalleled in the Maya world. This temple has an intricately worked stucco  façade that is near perfectly preserved. This state of preservation is due to the fact that it has only been recently excavated and freed from protective exterior stone walls. The main element is the huge open fanged mouth of an earth deity through which a passageway leads deeper into the structure. There are molded masks, decorative geometric motifs, and most striking, winged statues termed “angels”. These are elaborately costumed and are unique in the Maya world. The complexity and beauty of this façade is breathtaking. Inside this structure is a chamber, Sak Xoc Nah, which translates to "White House of Reading". It was the tomb of the ruler Ukit Kan Le'k Tok, and held a vast amount of funerary items.

Over 40 texts, both painted and carved,  have been discovered at the site revealing important information regarding the sites rulers and their interactions with other sites. The most noteworthy is a text named the Mural of the 96 Glyphs.

This text is located within room 29-sub, one of the many rooms of the Acropolis. It is considered a masterpiece of calligraphy containing expertly crafted glyphs highlighted by blue, cream and red paint. It is arranged in three rows of 32 glyphs each. The text records an historical narrative, and accession of ruler Ukit Kan Le'k Tok on April 7, 770 A.D. (9.16.19.3.12).

On both the east and west sides of the North Plaza are large unexcavated mounds. On the southwest side of this large plaza is located a nicely restored ball court which was dedicated in 841 A.D.. This structure also forms the north western side of the South Plaza. On the west side of this plaza is an interesting structure, Structure 17, known as the Twins, and named for the two identical temples built together on a single raised platform. They are accessed by individual stairways, with each temple containing stucco masks. Facing Structure 17 and across the plaza is Stela 1.

Stela 1 was erected in 840 A.D. by a ruler whose name has been partially deciphered as K'uh...nal, and who references the earlier king Ukit Kan Le'k Tok.

Forming the south side of the South Plaza is Structure 16 named the Oval Palace which contains 10 rooms on the first level, two more on the top level, and which is crowned with a small temple. While it is constructed on a rectangular base, the multi-tiered structure itself is rounded. It is supposed that this structure is related to astronomical associations. Behind this structure is a small raised courtyard. To the southwest is a well restored arched entryway which was probably the formal entry point into the capital.

The east side of the plaza consists of a large platform with a central stairway to the top. Here are found the foundations of two small structures and a one-room temple. There are numerous other platforms and smaller structures located throughout the site.​ 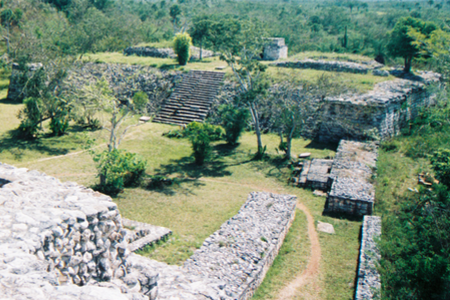 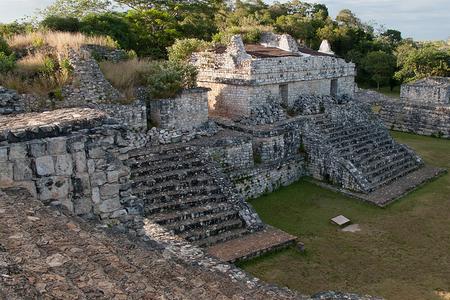