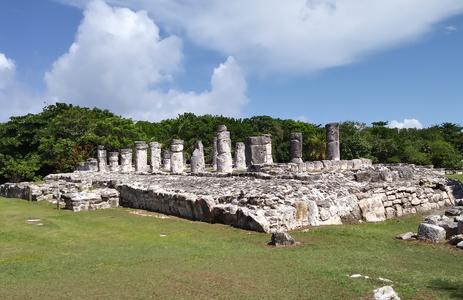 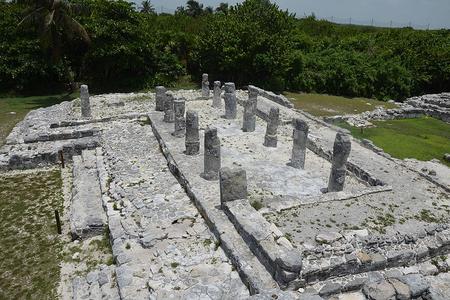 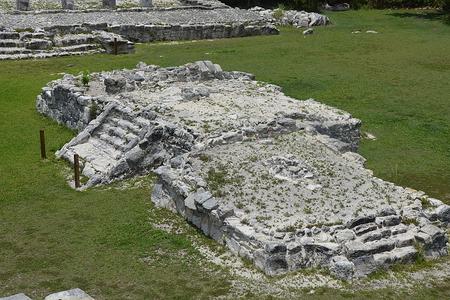 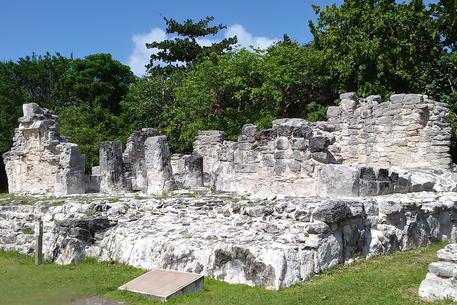 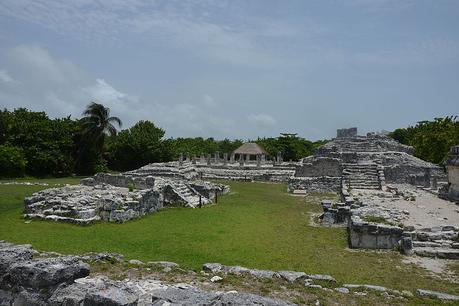 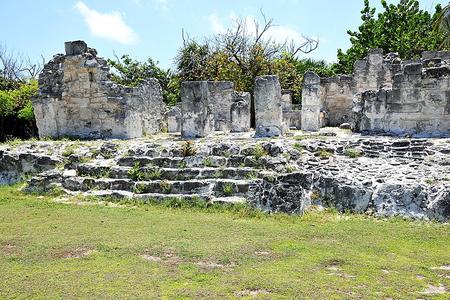 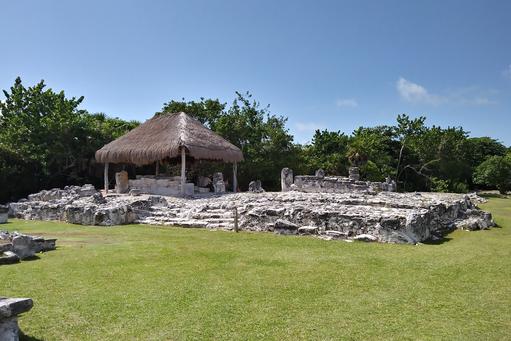 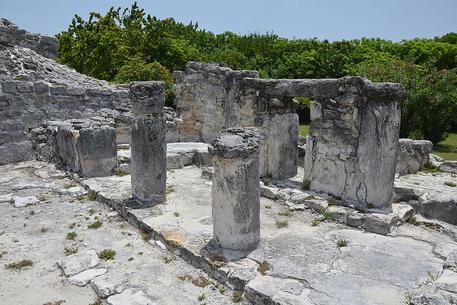 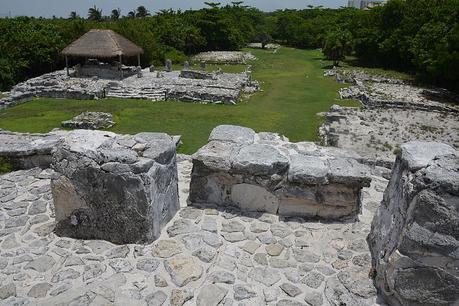 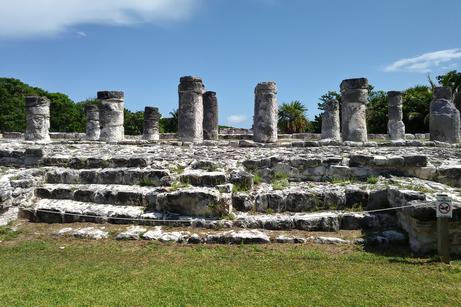 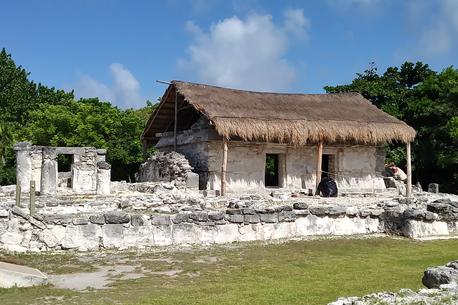 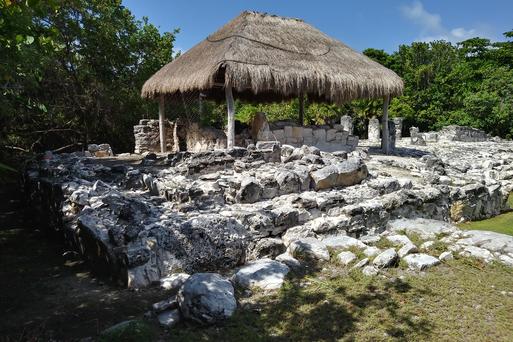 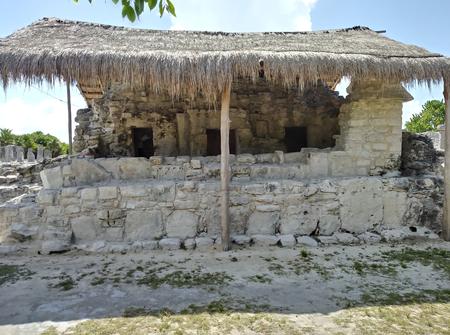 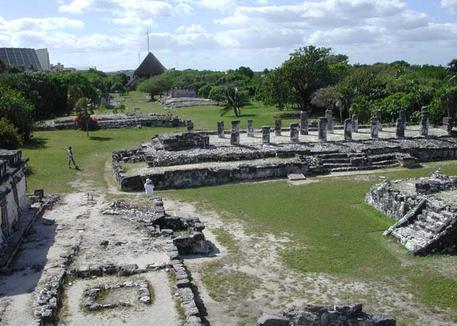 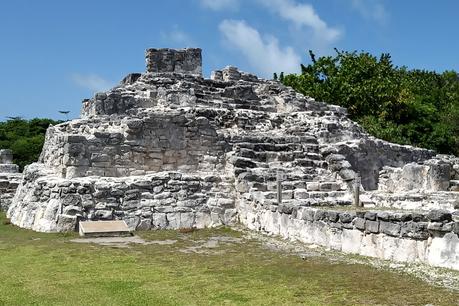 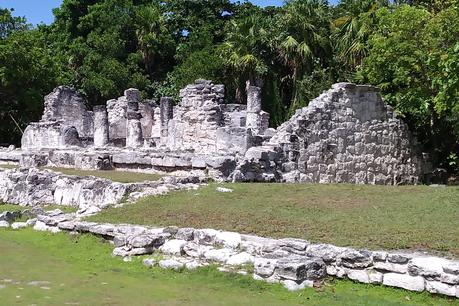 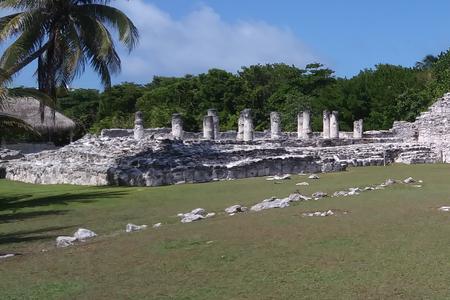 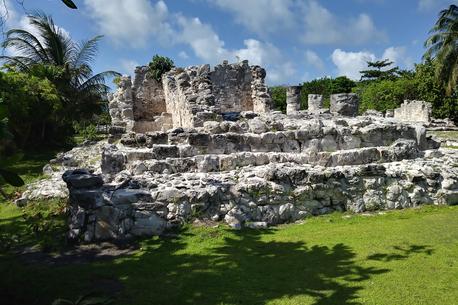 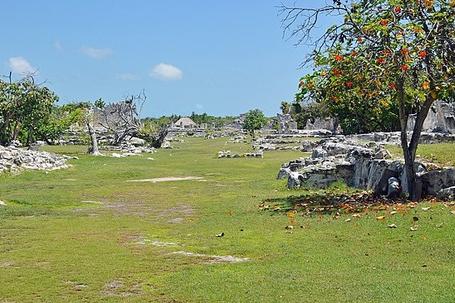 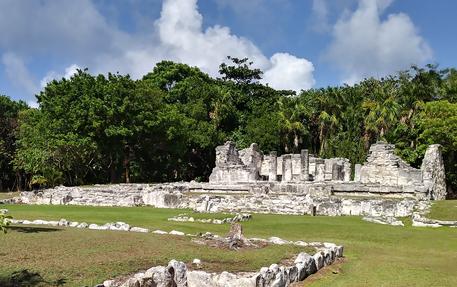 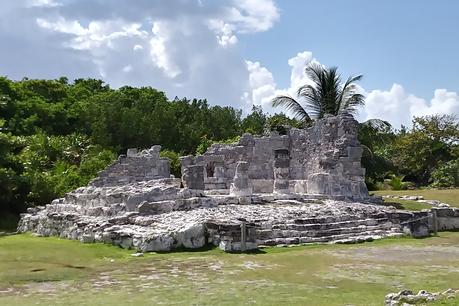 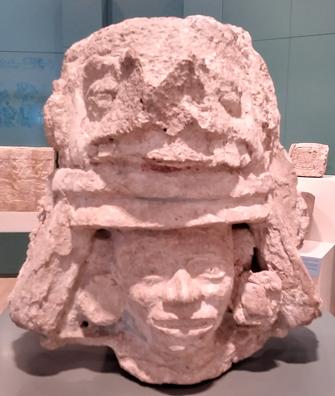 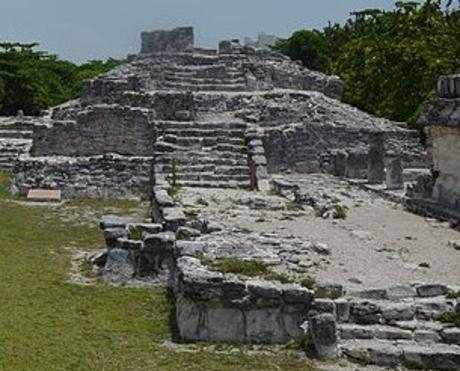 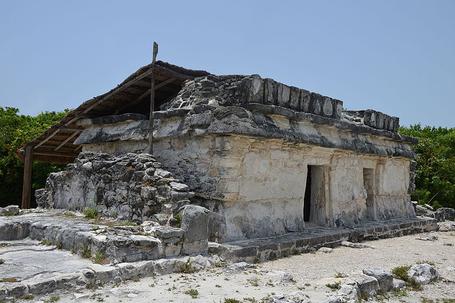 El Rey is a Post Classic archaeological zone (1200-1450 A.D) located on Cancun Island at km marker 17.5, on the lagoon side of Av. Kukulcan. It displays an architectural form known as “East Coast Style”, such as is found at its larger cousin, Tulum. This is a mostly linear site, and though small requires a bit of a walk to the far end under a hot sun. No shade here as is found at El Meco which is located just north of downtown Cancun. Visit El Rey in the morning. There are numerous platforms, plazas, a pyramid/temple complex, and other civic/ceremonial structures. Over 500 burials have been identified buried beneath the residential platforms.

The site is on the low, lagoon side of a high sand barrier that runs along Cancun Island, built most likely to facilitate it as a calm water commercial port. It is named after a recovered sculptured mask of a presumed ruler of the site, the original name being unknown. The main roadway, Avenida Kukulkan, runs on the Caribbean side of the site and sliced right through it during construction separating El Rey from its northern extension now known as San Miguelito. It is thought that smaller platforms and structures were destroyed during the roadway and golf course constructions.

HISTORY
El Rey had its beginnings in the Late Pre-Classic/Early Classic (300 B.C.-600 A.D.), and came into prominence during the Late Post Classic (1200-1450 A.D). After the Spanish Conquest, and with the Maya trade routes dissolved, El Rey along with other coastal sites lost their importance and rapidly declined.

The first modern accounts were made in the 1800’s by Stephens and Catherwood, Alice and Augustus Le Plongeon, and Capt. Richard Smith, among others. The site was named El Meco in 1909 by Channing Arnold and Frederick Frost. Later it was visited by Thomas Gann and Samuel Lothrop who produced site maps and descriptive reports. In the 1950’s excavations were conducted by William Sanders. INAH began the first consolidations and reconstructions in the 1970’s, which continues to this day. Documentation work at the site was observed in May 2019.

STRUCTURES
El Rey has two main plazas, along with numerous platforms and structures that are distributed along the two sacbeob (white stone roads) that run the length of the site.

The first structures seen after entering the site are a series of low platforms that line both sides of a long sacbe that runs on a north/south axis, here called the South Sacbe. The platforms are formed by low foundation walls capped with a row of horizontal blocks. Traces of some masonry interior walls are found on most of the platforms, as well as, some nicely worked stairways that face either east or west onto the sacbe, with some exhibiting rear steps as well.

There are three palace type structures that are interspersed along the South Sacbe. They have the same general layout of interior chambers, a flat roof, and entry between two columns. The largest, and most complete, is The Temple of the Columns, structure 22L-l.

Structure 22-l is on the east side of the South Sacbe. It rises off a low platform displaying a broad, central stairway. The twin column entryway here is of rectangular pilasters as opposed to round columns that are present at every other structure. Looking straight through the entryway into the first chamber is a small, raised sanctuary that is in common with the other two structures along the South Sacbe. This presumably held an incense burner or other sacred object, a strong focal point upon entering the structure. An interior row of columns is present that would have assisted in anchoring the flat roof. A doorway leads into a smaller, private rear chamber. Both chambers have benches against the walls. A portion of the roof molding is still present which displays the typical “East Coast Style” design.

The other structure on the east side of the South Sacbe, here called the East Structure, is nearly identical to Structure 22-l. It has interior columns as well. A central stairway leads up to a small terrace, with a further step leading into the structure proper. A high wall of about 12 feet/3.7 meters made of well-cut stonework is visible on the south side. It is adjoined to a north platform, which may have been part of an extended complex, though that structure would have been made of perishable materials. Both Structures, 22-l and the East Structure, have the outlines of a small altar/platform in front of them upon the sacbe.

Across the sacbe between the two east structures is the last of the masonry structures along the South Sacbe, here called the West Structure. Though similar to the above two structures, this structure is a bit smaller having no interior roof supporting columns or altar/platform upon the sacbe.

Behind the platforms on the west side of the South Sacbe are at least two platforms set off on a sub-plaza. This could have been an extended part of a residential area. A golf course is within a stones’ throw of these platforms and it is possible other platforms were destroyed in its construction.

The South Sacbe ends at a low, rather large two-tier platform that extends from the east side of the sacbe into its center. The platform stairways here face both north and south focusing ones’ attention towards Structure 4.

Structure 4, a large civic/ceremonial construction measuring 106 ft/32 mts x 53 ft/16 mts, is clearly visible when first entering the site. The base platform is slanted inward from the ground level, and made of some very large stones, some measuring over 28 inches/70 cms in height and 8 inches/20 cms thick.  The structure itself is composed of two long galleries divided by twin rows of columns, 18 in all. These columns at one time supported a rather large, flat roof.  A broad stairway leads up to the structure from its north side. A small altar is evident in the center of the stairway. A small east stairway leads to a terrace that runs halfway around the structure. It must have been a grand structure in its prime!

Structure 4 forms the south side of the Main Plaza. The plaza contains five structures in all, the most important being Structure 2, El Castillo.

Structure 2 occupies the northeast corner of the Main Plaza. This is of a pyramidal design with three levels reaching a height of 18 feet/5.5 meters. It is the tallest structure at the site. The summit is crowned by a two-chambered temple. A burial of a presumed ruler was discovered under the floor of the temple. The base of the pyramid is formed by large blocks, some set sloping inward. The structure shows at least two construction phases. There are stairways that connect each level of the structure with the lower stairway rising off a platform that houses Structures 3a and 3b.

Structures 3a and 3b are set upon a platform that forms the east side of the Main Plaza and is connected to the pyramid platform. A single stairway leads up to a platform terrace from the south side. Only a small portion of Structure 3a’s walls, columns and a doorframe remain standing.

Structure 3b is a mostly intact temple having twin, parallel chambers There are remains of an exterior stucco finish with the buildup more than an inch thick. Faint bands of blue and red paint are still visible. It is accessed through two entrances that face onto the Main Plaza. The front chamber is intact with traces of a mural on its inside walls. Three doorways open up into the rear chamber with the central doorway being the most elaborate. This chamber no longer retains its roof, and the walls are in a ruined state.

The remains of foundation walls on the north side of Structure 3b indicates a possible one room chamber. Behind structure 3b is a medium size platform with a plaza facing stairway.

Structure 5 is rather unusual. At most sites this space is taken up by an alter/platform with steps on either two or four sides. It is thought that these may have been used as ceremonial dance platforms or other related activities. It would appear that originally that was the case. However, at some point north and south platforms were added to the structure greatly increasing its size. Also, the remains of walls are discerned that could indicate that roofed chambers were once part of this new design. Intriguing!

The north side of the plaza is anchored by Structure 1. Structure 1 is constructed upon an “L” shaped platform with its long end built against the side of the pyramid platform. This is also considered to be a civic/ceremonial structure. Two stairways lead up from the south side of the Main Plaza. There are at least 14 remaining columns that would have supported a flat roof. A small platform extends outward from the northside of the structure into Plaza 2.

Plaza 2 is the other principal plaza of the site. There are four structures that ring the plaza, and a small altar/platform in the center. Structure 1 takes up the south side. Though it appears that the main part of this structure had its orientation towards the Main Plaza, the small platform that extends out from it could have played a role in Plaza 2’s function.

The west side of Plaza 2 has a low platform that is barely noticeable. The principal structure of the plaza is Structure 7.

Structure 7 is set upon a platform about the same size as Structure 1, containing two distinct structures. The main structure is accessed from the plaza floor by a central stairway that leads through two columns into a wide chamber. This chamber has a total of 7 columns that would have supported a flat roof. On the west portion of the platform is a small, multi-chambered structure that was connected to the main structure and most likely shared a common roof. A modern palapa roof protects its remains. A good amount of the original stucco floor is still visible.

The platform foundation of Structure 7 is composed of some very large blocks that measure over 43 inches/110 cms in height. The manpower involved in constructing these structures is hard to comprehend, and more often than not, little appreciated.

The east side of Plaza 2 is held down by a large platform with a well-constructed stairway. No remains of stone walls are apparent and it probably held a structure of perishable materials. This is to be the case with the remainder of the structures at the site which are located on a sacbe here called the North Sacbe which runs north out of Plaza 2.

The North Sacbe has a length of about 650 feet/200 meters before it disappears into the surrounding mangroves. This sacbe once continued to, and was part of, the site of San Miguelito. On either side of the sacbe are 12 platforms thought to be of a residential nature, and one small temple platform.

A very nice way to spend an hour or two before heading back to the beach chair!