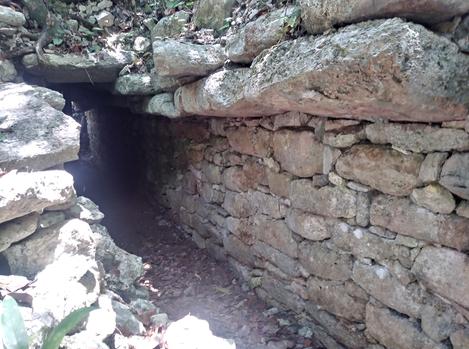 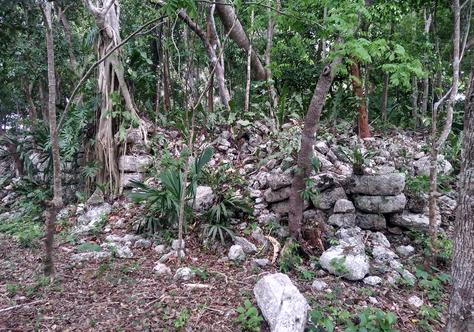 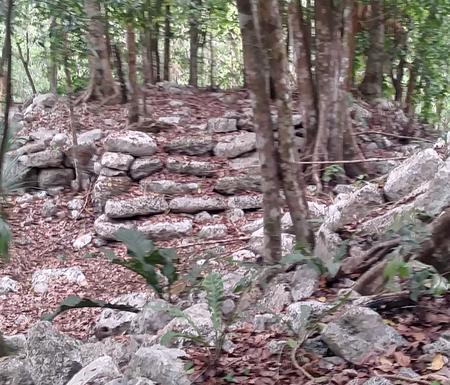 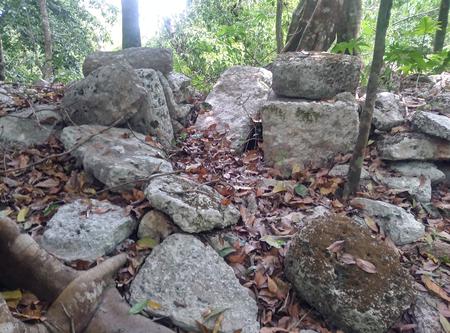 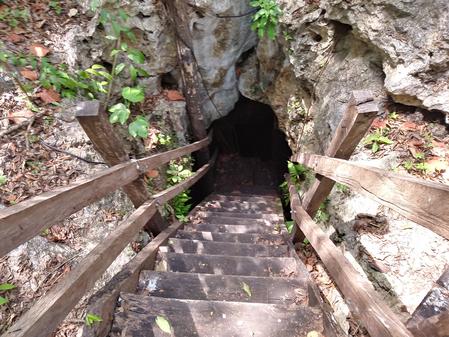 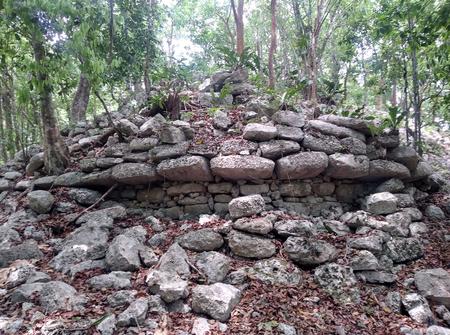 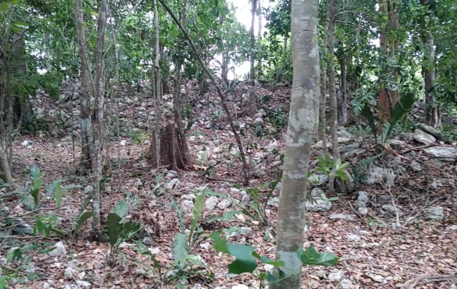 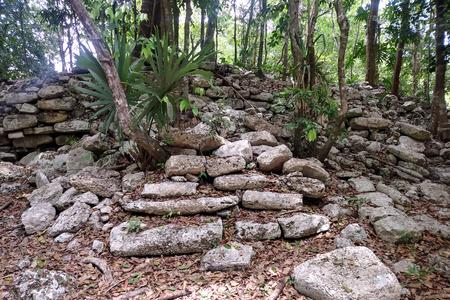 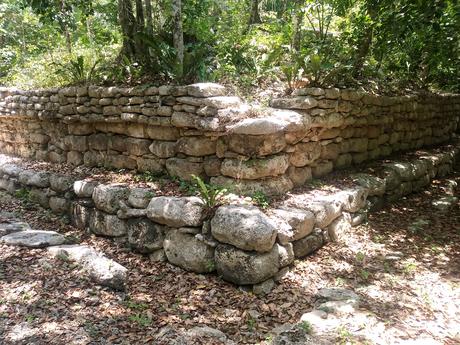 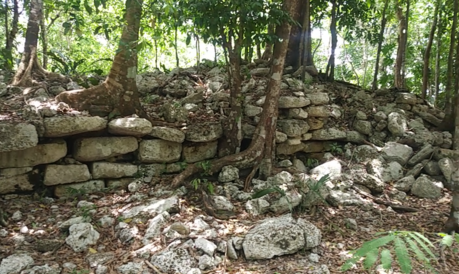 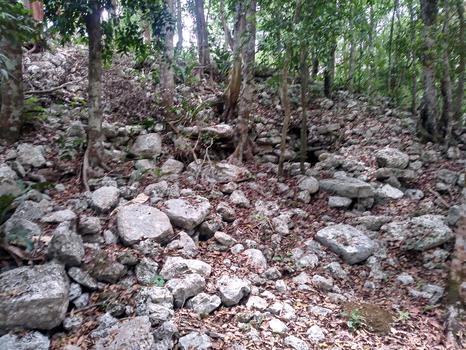 DESCRIPTION
El Naranjal is an archaeological zone located outside the pueblo of the same name about 6.5 miles/10.5 kms south of the town of Ignacio Zargosa. It is reached off the Valladolid-Cancun Libre, and is an INAH designated site, though there is no kiosk or representative. The site is maintained by the local community.

There are three groups, A-C, that make up the site. Group B is the main group with standing architecture and the only one open to the public. Group A is to the south, and a sacbe from there leads to the southwest towards Coba. A few standing walls have been reported there. Group C is a short distance to the northeast and is composed of low mounds. A cenote within a cave is located a short distance from the site.

The village of El Nananjal has a small museum, which apparently will be opened if someone is around with the key. Guides can be found about the pueblo square. Ask for a knowledgeable guide named Jose Raphael Cupul who will also take you to the cave and cenote after visiting the site.  He provided interesting info about the early investigations done by Karl Taube and Tomas Gallareta Negron in 1983.

HISTORY AND EXPLORATION
The prevalent “megalithic” style of architecture places the beginnings of the site to the Late Pre-Classic (300 B.C.-200 A.D.)-Early Classic (200-600 A.D.) Periods, while ceramic evidence indicates a reoccupation in the Post Classic (1100-1500 A.D.). Temple rearrangements, and modifications of earlier structures were carried out in the Post Classic. These rearranged temples have been identified as rain/water shrines. They appear on many of the summits of the sites’ structures. Offerings such as jade, ceramic, shell, and stalactites have been recovered which have helped researchers to interpret ritual/ceremonial practices of the Post Classic Maya.

Early exploration reports of this site are unavailable, though the site was first reported on in the 1940’s. Karl Taube and Tomas Gallareta Negron visited the site in 1983. The first reports and mapping of the site was produced by Scott Fedick and Karl Taube in 1993. Recent restoration work was completed by Adam Pacheco B. and Ana Parrilla A. in 2000-2001.

STRUCTURES
Group B is the only area of the site currently open to the public. It consists of 21 known structures/mounds with 19 being within the core area. It is oriented a few degrees east of north.

The next group of structures are situated atop a slightly raised, large plaza, here called the East Group. These structures show clear evidence of megalithic architecture.

Megalithic architecture is an architectural style which features the use of very large blocks of stone in the construction of structures. These often are set without the use of mortar, have rounded corners, and a line of these blocks extrudes outwards above the rest. This style was prevalent in the Late Pre-Classic period into the beginning of the Early Classic, and can be seen at other sites such as Izamal and Ake.

The principal structure of the East Group, known as Structure I0, occupies the northeast portion of the plaza, and has an unusual oval design. It has a nice, central flying stairway that leads to an upper level. A passageway exhibiting fine stonework runs under the stairway, hence its name. It’s about ten degrees cooler in the chamber. Nice respite on a hot day. A burial along with some ceramics were recovered beneath the floor of the passageway during investigations in 2000. No remains of chambers were identified on the summit of the structure which attains a height of about 12 feet/3.5 meters. A small platform, Structure 11, lies directly north.

The next structure of note, Structure 14, lies south of Structure 10 along the east side of the plaza. Two small mounds, Structures 12 and 13, are inter-spaced between the two structures.

Structure 14 is a square, multi-tiered construction.  A broad, central stairway leads up to a small terrace on the second tier. A smaller stairway then rises up to a third tier upon which a temple with a single entryway and chamber is located. Only some low foundation walls remain. The original lintel has been crudely replaced atop the supporting door jambs. The height of this structure is reported to be about 19 feet/6.34 meters, though it appears less so. The sides of this structure exhibit nicely restored walls.

During investigations carried out in 2000 a number of test pits on the second level of Structure 14 revealed several figurines, carved olive shells, and ceramics dating from the Pre-Classic and the Post-Classic. It appears that the site was abandoned in the Early Classic, then resettled in the Post Classic nearly 1,000 years later.

A ruined, low pyramid, Structure 9, occupies the northwest corner of the plaza across from Structure 10. Again, large stone slabs are evident in the construction of this structure. A small temple is located upon the summit. A ruined, central stairway leads down into the plaza.

A short distance to the southwest is Structure 2. This structure is built atop a massive platform base measuring about 210 feet/65 meters on its east side, and nearly as long in its width. It is about 15 feet/4.5 meters in height.  The construction of just this base alone entailed an incredible amount of manual labor. Again, like Structure 1, a long, ruined structure occupies its entire north side. This structure is about 6-8 feet/ 1.8-2.5 meters in height, with a small altar/shrine located in front on the east side. The rest of this huge platform, while heavily overgrown, appears to have no other structures of standing architecture, though a second altar/shrine has been reported. A stairway is reported to be on its south side, though this area was too overgrown to investigate. A sacbe, Sacbe 1, leads out from here through the core area, and on to Structure 21, a low mound, that is on the fringe of a wetland area to the northeast.  Other structures are located to the south and west.

A cenote is located within a cave a short distance from the site. Cenotes and caves were of extreme ritual importance to the Maya. They were connected with the all-important rain gods, and as sources of pure water for ceremonial purposes. Stalactites were revered as a source of pure water and were often removed and placed in/under shrines and altars. Remains of these were found within the temple/shrines of Structures 2, 9, 14 and 21. A photo of a removed stalactite surrounded by glyphs from a cavern named Actun Ucil, near the site of Oxkintok, is included here for reference.

The cenote is reached by taking a rough, dirt road that runs along the north side of the site. The cave is accessed via a long, wooden stairway that leads on down to the first level of the cave. Mot Mot’s fly about displaying their vibrant colors. A short, bat-pooped path leads further down to the cenote proper. A good flashlight is required as no natural light penetrates down to the cenote. A solar panel to provide interior lighting has been erected outside of the cave entrance, but was not operational at the time of our visit.

All in all, a good way to enjoy an afternoon excursion. 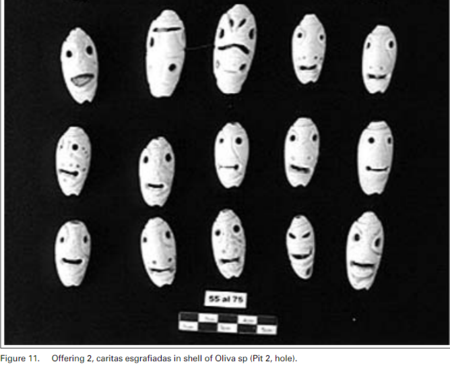 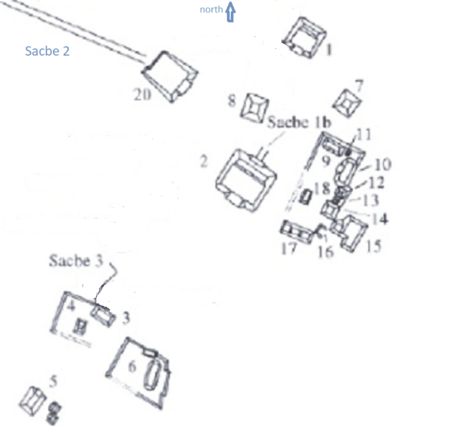 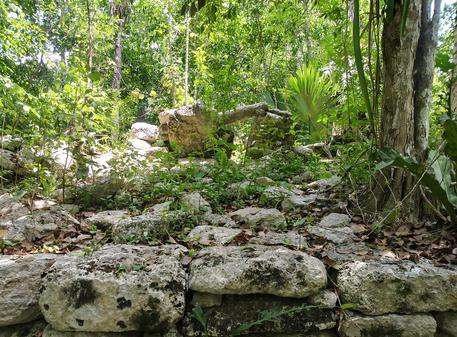 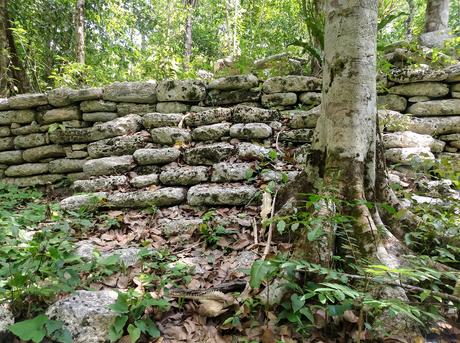 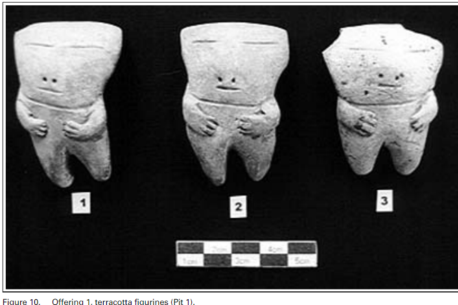 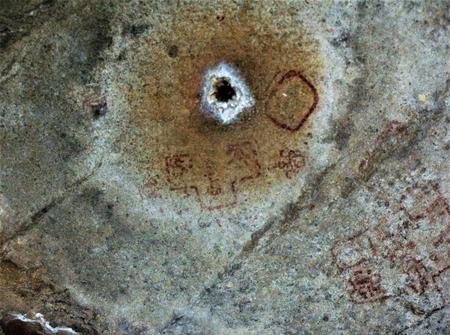