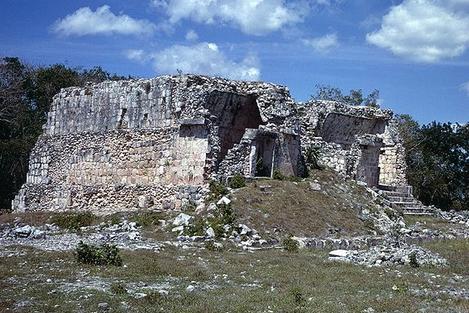 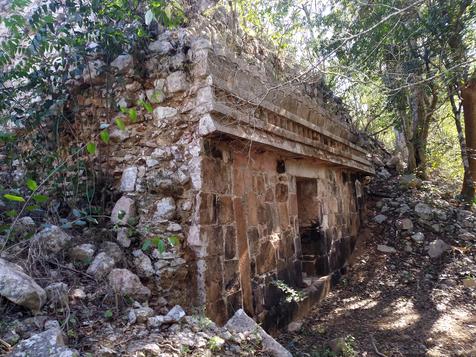 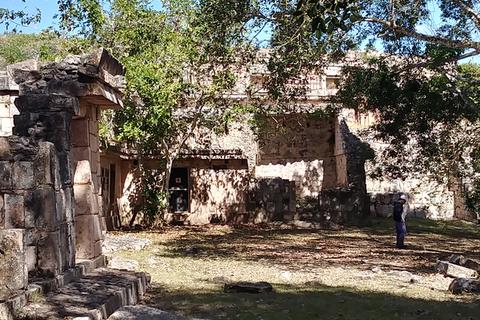 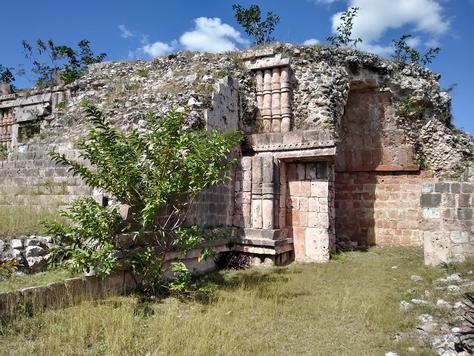 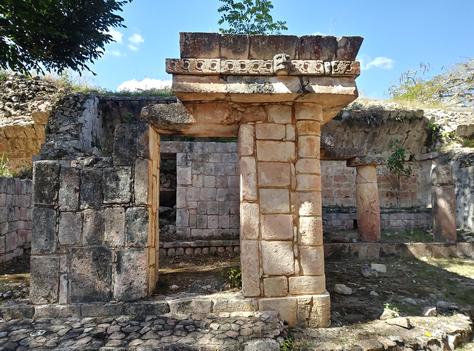 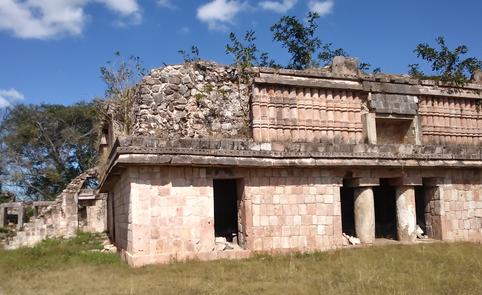 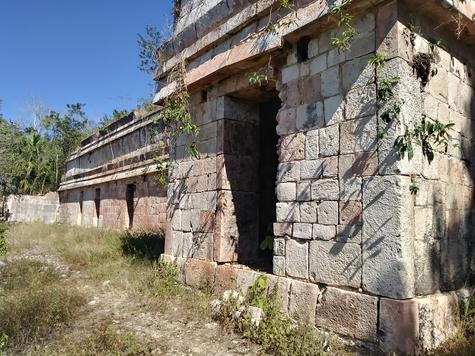 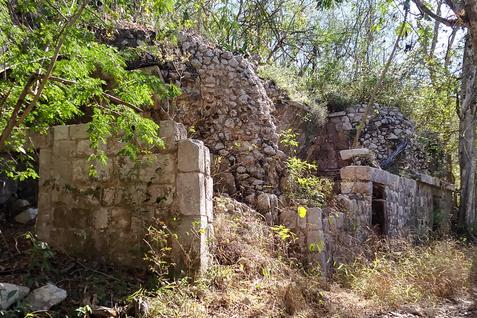 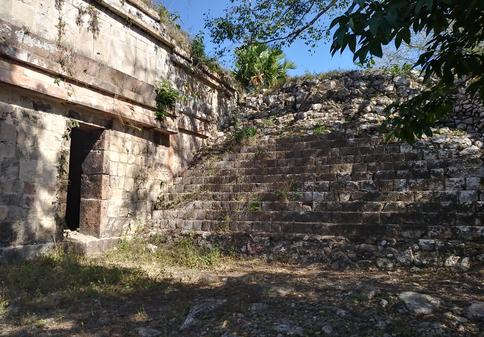 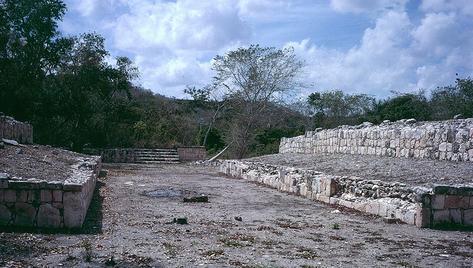 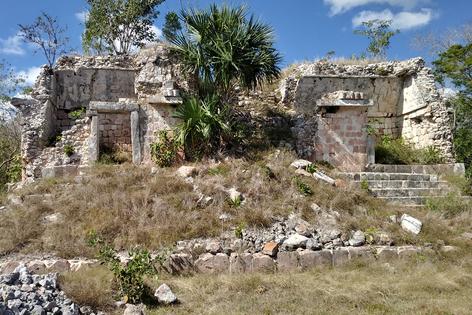 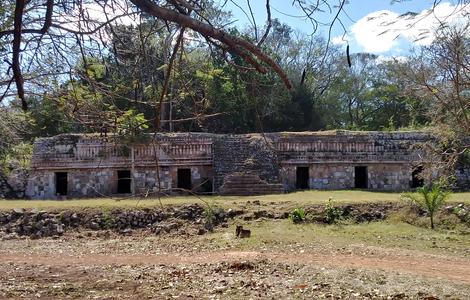 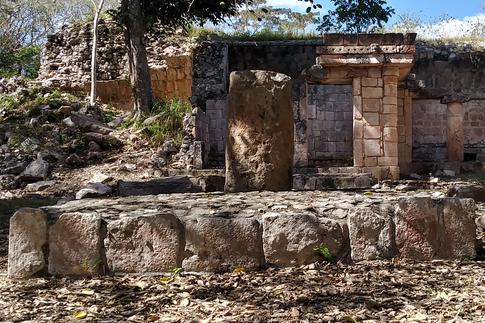 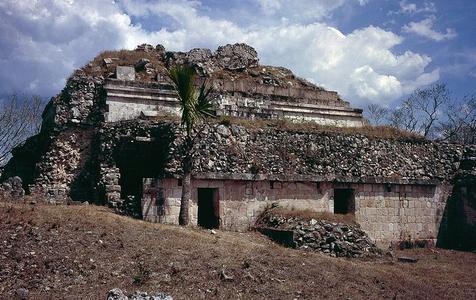 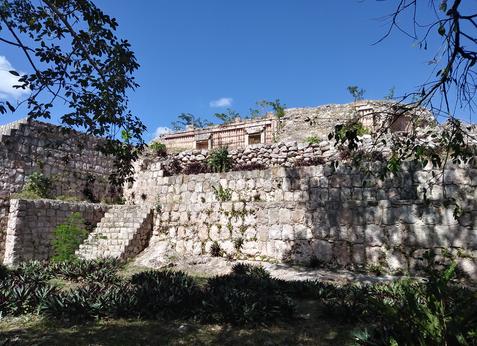 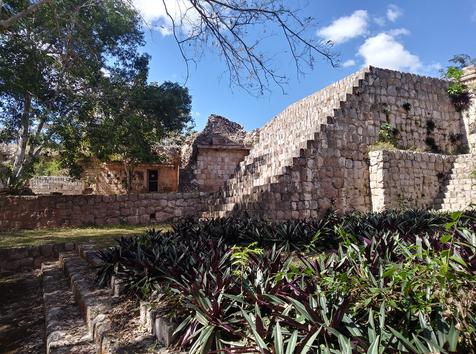 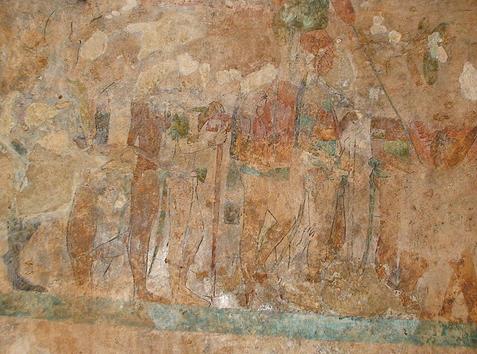 ​
DESCRIPTION
Chacmultun is a Late Pre-Classic archaeological zone located in the Puuc area southwest of the town of Tekax. Its name means “Red Stone Mounds” in Yucatek Maya. This is in reference to the light pink color of the structures brought about by certain micro-organisms that reside within the stones’ surface. Its original name is unknown.

There are four main groups of structures that were built upon low hills and artificial terraces. The groups face onto a low-lying area that runs between them. While no stelae or other hieroglyphic writing has been discovered so far at the site to identify its rulers, it is thought that it had trade and political relationships with other Puuc area sites.

Chacmultun reached its apogee during the Late Classic/Terminal Classic (600-1100 A.D.). A number of impressive murals, now degraded, have been discovered within its structures.

HISTORY AND EXPLORATION
Chacmultun is a late Pre-Classic site (300 B.C.-200 A.D.) that grew in importance during the Late Classic and Terminal Classic Periods. Unlike most other Maya sites, Chacmultun was inhabited into the Spanish Colonial era. In addition to agriculture, a significant amount of limestone has been recovered that was used for the production of amate paper. This material was found within the elite residential area showing that the production of paper, an important trade item, was controlled by them.

The site was first reported on by Teobert Maler in 1895, and Edward Thompson in 1902. Excavations and consolidations began in 1970 and again in 1980 under the direction of INAH.

STRUCTURES
There are four groups of structures that make up Chacmultun. The Chacmultun and the Xetpol Groups are arranged on low hills on either side of a valley. The Central and Cabalpak Groups are located on the valley floor itself. A number of chultuns/cisterns are located throughout the site for the collection of rainwater.

The Chacmultun Group is on the west side of the valley and contains the more impressive and better preserved structures. The main structure here, Structure I, is the Palace, a multi-story acropolis style structure set upon the upper plaza level, a leveled hilltop. It faces south onto the plaza. The first floor may at one time have had as many as thirteen chambers that circled around the structure. The south side has three rooms on each side of a grand stairway. The central chamber on each side of the stairway is double wide having two round supporting columns. Very nice. The northeast corner has completely collapsed.

The second floor has 10 or so chambers, many intact. Their entryways have an interesting stone overhead projection of thatched hut design. A west facing flying stairway leads from the plaza to the second floor. The entire façade was decorated with a triple row of colonnetts.

A central stairway leads up from the plaza to a leveled third floor. Aside from a small platform/altar, this area exhibits no construction. Some nice colonnetts flank the stairway.

A structure extends from the rear of the palace west across the plaza. This structure is in a ruinous condition with just the west wall and a few doorframes and lintels standing.

The west side of the plaza is anchored by a multi-story structure in a partially restored state. It is called The Courthouse/Structure II and is set upon a raised platform. There appears to have been two vaulted chambers on either side of a recessed stairway that faced onto the plaza. The second floor is in a ruinous condition. A large chultun/cistern is located in the center of the plaza.

The lower plaza level of the Palace group has some nice retaining walls exhibiting some fine stone work. A broad stairway leads to the Palace on the second plaza level. Structure 3 constitutes a line of chambers, some intact, some half fallen, that are recessed into the side of the hill and form a capital “L”.

One of these chambers, Room 10 on the north side, contains the remains of a once colorful mural depicting a procession of warriors and lords that was recorded by Thompson. The chamber measures 15’/4.5 meters x 10’/ 3 meters with a height of 13’/4 meters. Against the rear wall is a small platform such as is found in some of the other chambers. The room was once totally painted though only the north wall has recognizable features. The figures are found within three horizontal bands. Some modern graffiti has damaged some of the remaining figures. Well worth a look.

Across the lower plaza to the west is a structure known as the Kings House, Structure III. It faces east across the plaza and over the valley floor to the Ball Court in the Central Group. This structure is the last of several chambers that form the long leg of the “L” shaped group. It has an ornate entryway that leads into a two-chambered structure. It is connected on the north side by another chamber that has a wide opening supported by twin columns such as seen at the Palace. In front of the Kings House is a circular platform/altar and a monolith, possibly an eroded stela.

Directly to the south from the Central Group is the Cabalpak Group, also known as Structure V. As with the Palace in the Chacmultun Group, this multi-story structure is built into the base, side and leveled summit of a hill. The ground floor has been nicely restored. A central stairway divides six existing vaulted chambers. A fine band of colonnetts grace the upper façade. The stairway leads up to the unrestored remains of the second and third stories built upon leveled terraces. The fourth story crowns the leveled summit of the hill. A path leads up and around the west side of the structure.  The main stairway will also lead to the upper levels.

A path runs in front of Structure V across the valley to the Xetpol Group. It’s a 10-15 minute hike, then a steep climb up a rough path to the group structures. This group sits atop the highest hill in the valley.

The lower structure, Structure IV is built into the side of the hill. It is in the shape of a Capital “L”, and has been nicely restored. An artificial terrace extends out from the structure overlooking the valley back to the Chacmultun Group. Six chambers face onto the terrace and across the valley.  Five chambers are part of the long leg of the structure, with one chamber belonging to the short leg. Some are double chambered. They contain benches with small niches against the rear wall, and at one time had decorative murals, now vanished.

The exterior walls are rather plain with only small medial band moldings to break up the surface. A ruined side wing extends out on the north side of the structure. The south side has a single chamber caddy cornered by a stairway which leads up to Structure XX.

Structure XX crowns the hilltop and contains a two-story structure. The lower structure again is in the shape of a capital “L”. It has three chambers, and is in a partially restored state. A collapsed vaulted chamber is on the north side of the structure. A ruined stairway here once led to the upper level.

The upper level structure is smaller than the one below and is in a ruinous state. A central stairway in front of a small terrace leads up to three or so roofless chambers. A very expansive view of the valley is offered from this vantage point.

Chacmultun, while a bit off the beaten path, is a site well worth a visit. 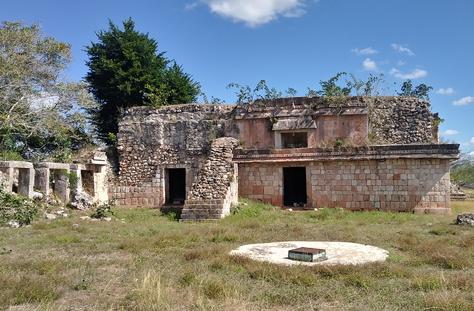 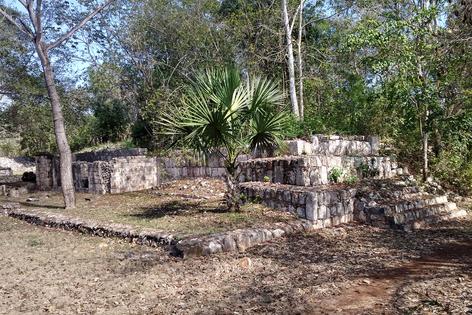 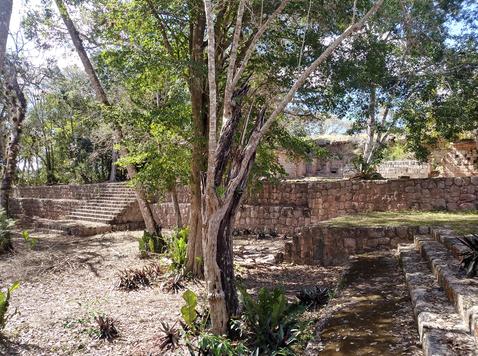 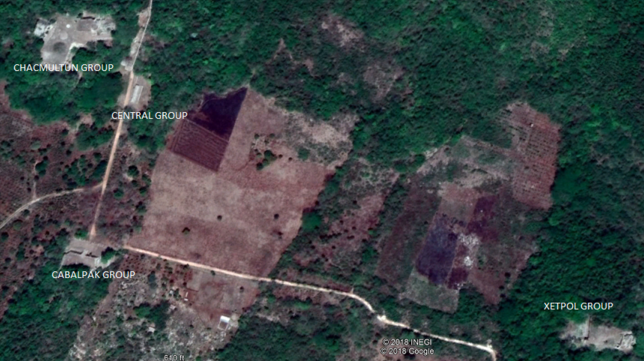 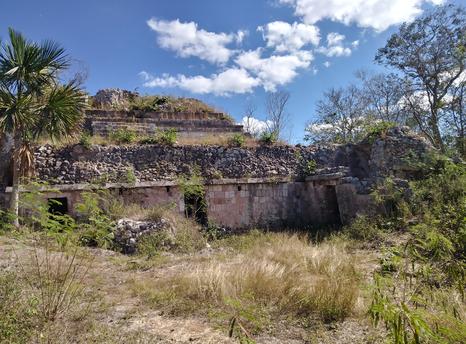