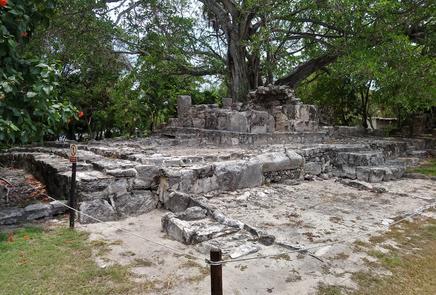 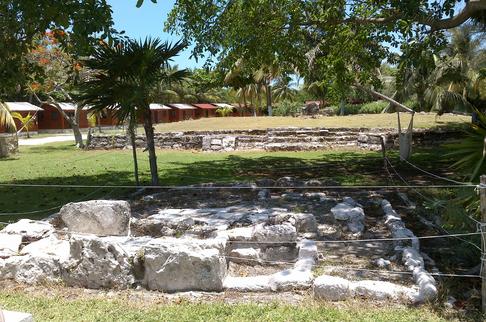 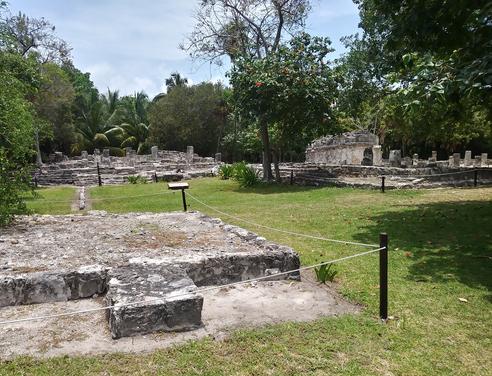 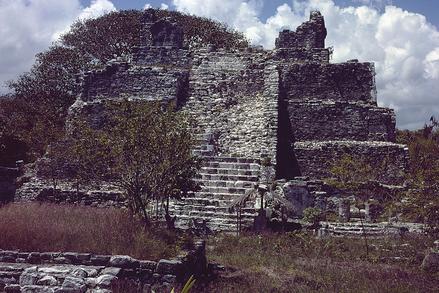 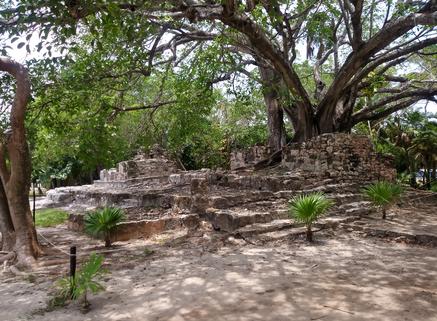 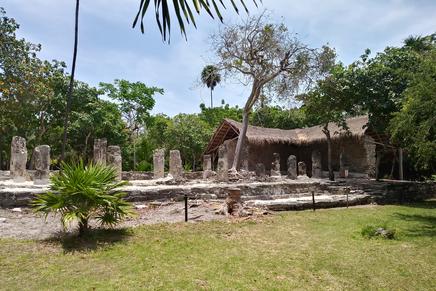 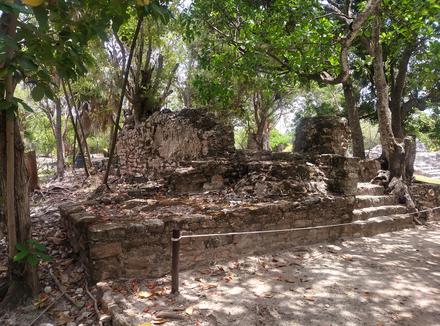 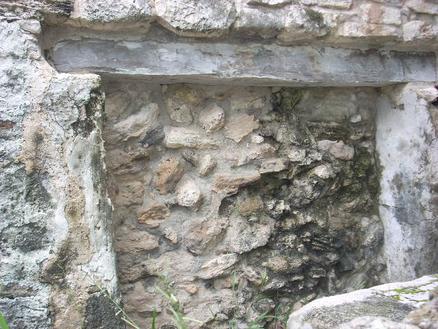 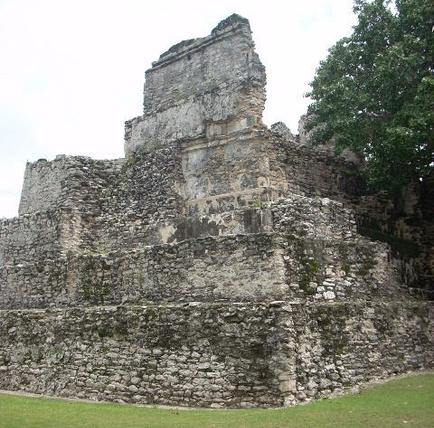 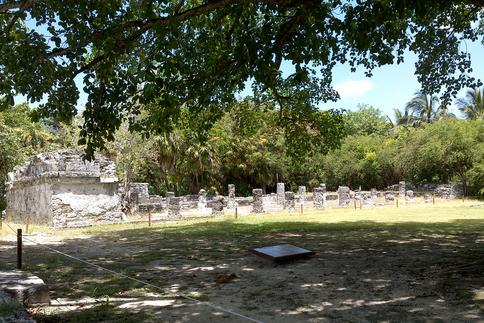 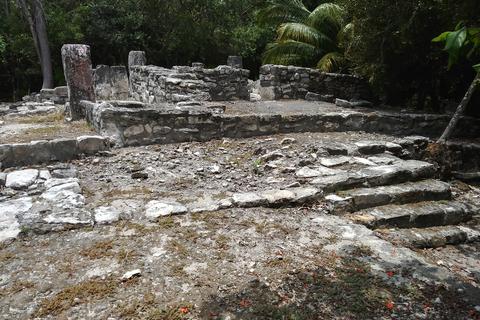 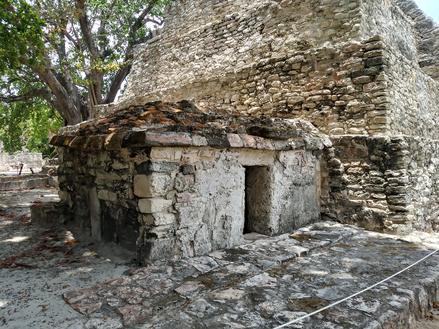 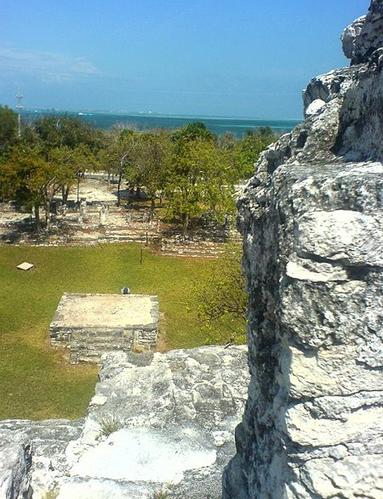 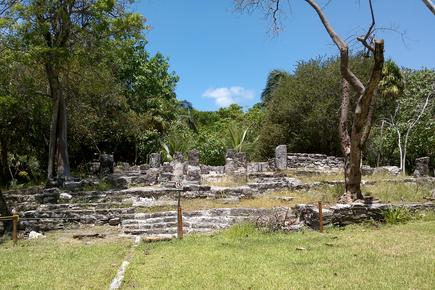 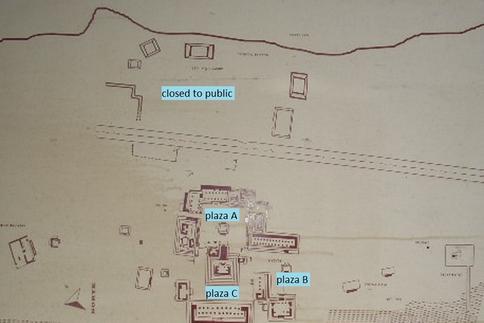 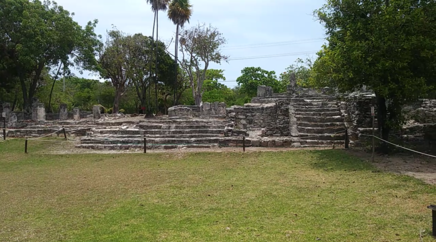 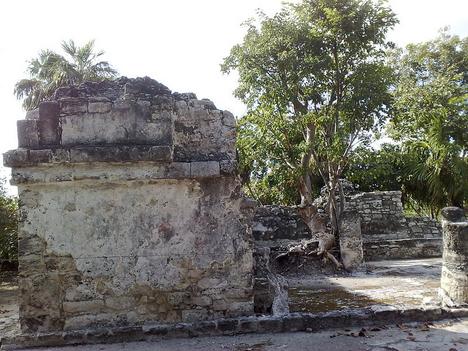 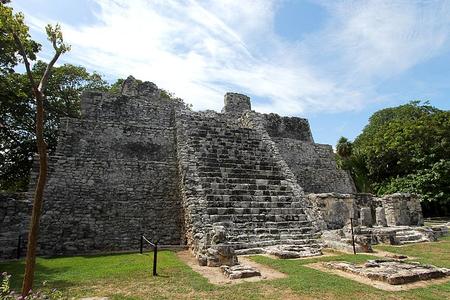 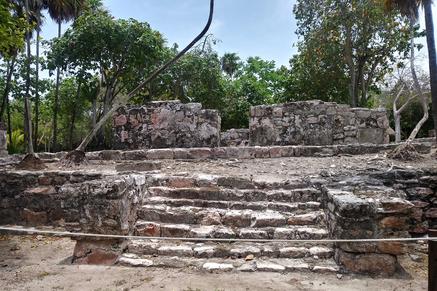 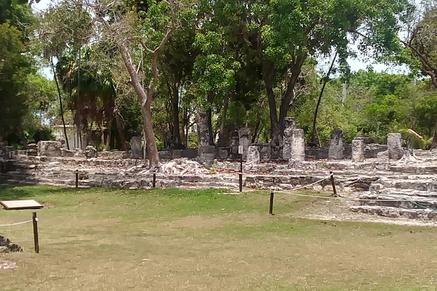 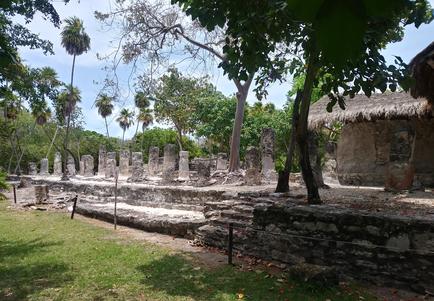 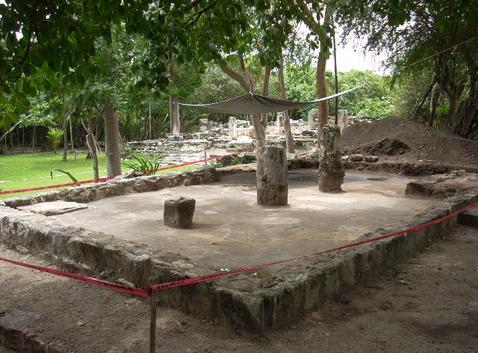 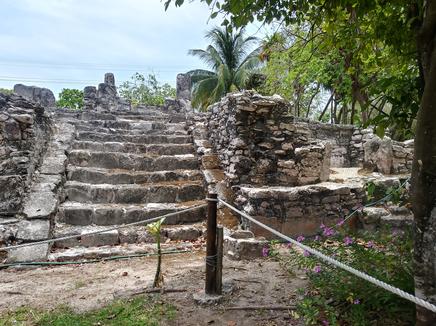 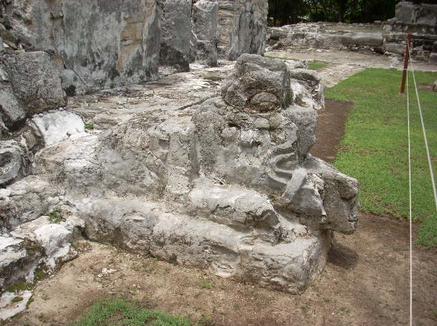 DESCRIPTION
El Meco is a small archaeological zone located on the northern outskirts of the city of Cancun on the coastal road to Punta Sam. The ruins are very well maintained by the local INAH representative, Jesus. There are numerous shade trees, birds and flowering plants that enhance the visitors experience. It is very easy to reach by car, taxi, or minivan as it is only 4 miles/6 kms from the city center. It has the tallest pyramid on the northeast Yucatan Peninsula.

This site is situated along the coast and is divided by a public roadway. The coastal portion is closed to visitors. It is thought that this section was a residential area. The remains of a pier have been reported, but a search of the beachfront did not produce any results.

There are three plazas that make up the core site. A number of structures/mounds are located on private property both to the north and south of the archaeological park. A sacbe, white stone road, has been identified coming in from the southwest. This is a very pleasing, compact site.

HISTORY AND EXPLORATION
El Meco, whose ancient name may have been Yax Kin (First Sun), had its beginnings in the Early Classic (200-600 A.D.) as a small fishing village. The major site of Coba exerted a strong influence upon the entire east coast during this time, including El Meco. A population decline and possible abandonment occurred during the Classic Period (600-900 A.D.).

The site again returned to prosperity under the influence of Chichen Itza in the Terminal Classic (900-1100 A. D.). It reached its prominence in the Post Classic (1100-1450 A.D.) becoming the main embarkation point for devotees traveling to the sacred island shrines on Isla Mujeres just off the coast.  The site acted as an important port, part of an extensive trade network up, around, and across the Yucatan Peninsula. There are no known stelae or glyphic inscriptions recovered from the site that would help identify its rulers or direct political relationships with other sites.

El Meco was first reported on by Augustus Le Plongeon in 1887, followed by the renowned explorer and photographer Teobert Maler in 1891. In 1918 Samuel K. Lothrop and Thomas Gann of the Carnegie Institution produced descriptions and drawings. Fernando Robles C. and Anthony Andrews led official excavations under INAH in the 1970’s. The site has seen recent restoration efforts and was opened to the public in the early 2000’s.

STRUCTURES
El Meco comprises three plaza groups. There are a few scattered platforms located outside the archaeological zone on private property. The architecture is in the “East Coast style” as exemplified at the well-known site of Tulum.

Plaza A is held down on the west side by the main pyramid of the site, El Castillo, which has some similarities to its much bigger cousin at Chichen Itza. This structure consists of 3 building phases, one over the other as was common practice among the Maya. It stands about 40 feet/12.5 meters in height. A broad stairway, with two eroded serpent heads at the base, leads up four levels to a terrace. A second, smaller stairway then ascends to a temple structure having three entrances between two columns. From this vantage point a beautiful view of Isla Mujeres is achieved. Halfway up the backside of the pyramid is an entryway to an interior temple, now sealed off, that contains an original, wood lintel beam.

There are two small structures at either side of the pyramid base that face east and front the main plaza. The south structure, a small temple, is to the side of the pyramid. It has a single entryway and the only structure at the site with an intact roof. The north structure is larger and built against the side of the main stairway. A set of steps leads up to two columns through which one could enter the single chamber. A small bench/altar is against the rear wall. These two structures were part of the last construction phase.

An interesting note here is that on the northside of the pyramid one can see a portion of an older structure. The difference in workmanship is quite evident. The older structure has smooth finished uniform stone block with rounded edges at the corners where the sides meet. Very nice quality workmanship. The final construction phase consists of roughly cut stone of dissimilar size and shape. It was finished off with a thick coating of stucco to hide the imperfections. One could probably draw an analogy to some of todays’ construction techniques.

In the center of the plaza is a small ritual platform having steps on both the east and west sides. On the sides surrounding the plaza are other structures rising off platforms in a partial state of restoration. These are thought to have been of a civic or ceremonial nature.

Structure 3 is on the northside of Plaza A. It consists of two separate structures set upon a low, shared platform. There are stairs on both the south and east sides. The northeast structure is the larger of the two. It is a two-room suite that is now occupied by a rather large banyan tree. While the roof has long ago collapsed, the walls are mostly intact. The northwest structure, a single chamber, still has a portion of its corbeled roof visible.

Structure 4 occupies the northeast corner of Plaza A. Stairs ascend on both the north and west sides. This is a single chamber construction having a number of columns that once supported a flat roof. A central bench/altar is against the back wall. An original passage leads into the plaza from the north between it and Structure 3.

Structure 5 is on the east side of Plaza A, and abuts against Structure 4. It is set on a long, rectangular base. 14 columns, all still standing, once supported a flat roof.

A small structure is sandwiched in between Structures 5 & 6, here called Structure 6b. This structure has a wide stairway that leads up to a single chamber. Some low walls are still in place. A small terrace is on the north side of the structure.

Structure 6 is the last structure on the east side of the plaza. This structure rises off of a raised platform base, and appears to have had a number of chambers. Most of its walls are still in place. Columns supported a flat roof. Two lower chambers flank the central stairway.

Structure 7 is located on the southeast side of Plaza A.  This single chamber structure has some nice standing walls. A stairway from the plaza leads up to the chamber entryway, and a bench is situated against the back wall. A side entryway opens up to a north terrace.

The narrow end of Structure 8 is on the south side of Plaza A, though the majority of this structure is located within Plaza B.

Plaza B has 4 structures (8-11) that ring the plaza with Structure 8 being the principal structure here. It is a range type building that takes up the entire east side of the plaza. This may have been a market or administrative center, and faces west into the plaza. At the end is a standing portion of a semi-enclosed chamber that has traces of what once must have been a beautiful mural. Only the lower border is faintly visible. Stairways are on the north, east and west sides. There are 23 columns that once supported a huge, flat roof.

An altar/platform, Structure 9, is located in the center of the plaza. It has stairs on both the east and west sides.

Structure 10 is at the west end of the plaza. This building is set on a low, “L” shaped platform shared with Structure 11. A central stairway leads up to a multi-columned entryway. There are two or chambers that make up the structure. A north doorway opens out onto a small terrace. A stairway leads down into Plaza C.

Structure 11 is on the north side of Plaza B. This building has numerous columns that once supported a flat roof. Steps lead up from the plaza on the south side. Only the foundation is outlined. A chultun (storage well) is visible within the structure. In 2011, excavations unearthed a small offering cache beneath a well-preserved stucco floor. North facing steps lead down into Plaza C.

Plaza C has three structures, including Structure 11. The main structure, Structure 12, is a long platform with numerous columns that open up into a single chamber. There are the remains of decorative elements and original stucco on portions of a wall. The columns once supported a flat roof. Stone benches line the west wall. This may have been an elite residential structure. A small, raised platform forms the north side of the plaza. The back side of Structure 1, El Castillo, completes the east side of the plaza.

To the north of Plaza C, on private property, are several platforms. Structure 18 is the largest with stairs on its south side. There is no standing architecture atop the platform, and it is thought that any structures would have been made of perishable materials.

A very nice way to spend a morning or an afternoon.
​​