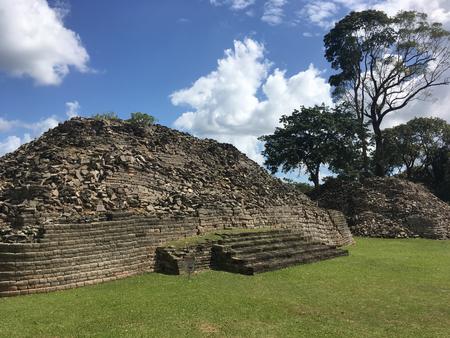 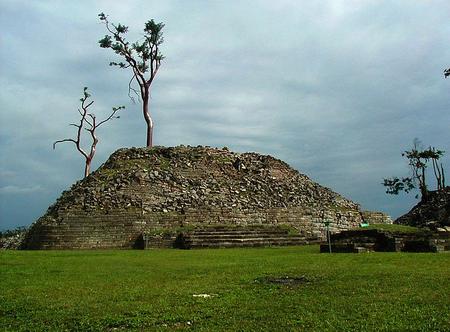 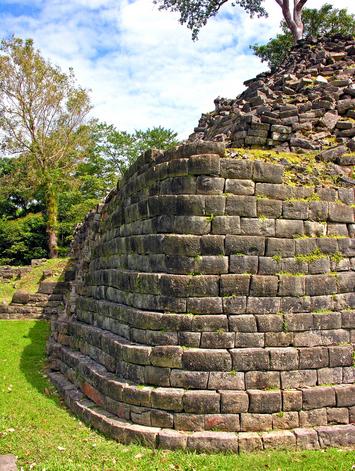 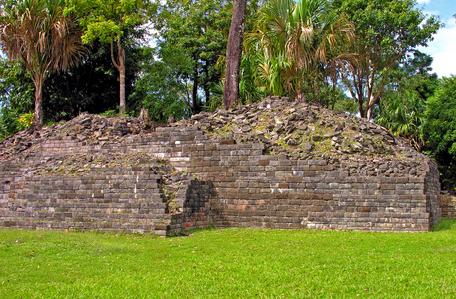 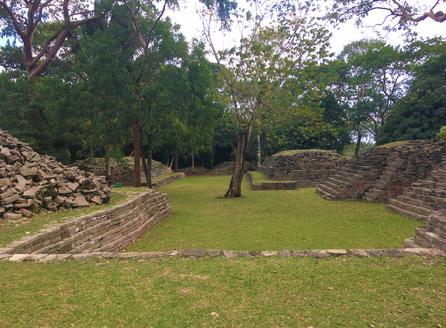 DESCRIPTION
Lubaantun, “Place of Fallen Stones” in Yucatek Maya, is an archaeological zone located in the southern portion of Belize. Its original name is unknown. It dates from the Late to Terminal Classic period (730-890 A.D.

The ruins are situated on an artificially leveled hill ridge containing numerous, broad terraces and plazas supported by retaining walls. Two small rivers run along the base of the hill, part of the Columbia River Valley System, which afforded it a strategic position along inland trade routes.  It is set on a linear north/south axis, and is spread out over 40 acres/16 hectares.

​The site is about 175 miles/280 kms south from Belize City, or about 18 miles/29 kms from Punta Gorda. It is recommended to purchase a road map or use Google as the routes to the south have different names, take different directions, though all merge into the Southern Highway. Once on the Southern Highway it is about 81 miles/130 kms to the crossroads center of Dump. From there secondary roads lead about 4 miles/7 kms to the village of San Pedro Columbia. Pick up food and drink here. The site is about 1.25 miles/2 kms to the north out of town.

HISTORY AND EXPLORATION
​Lubaantun seems to have had a short history. Excavations and research have determined that the site was inhabited for only about 160 years between 730-890 A.D., and then abandoned, as were many of the Southern Lowland sites at this time. Unfortunately, no stelae or other glyphic information has been recovered to identify its rulers or political/economic relationships with other sites.

The fact that over 25 stelae are located at the nearby site of Nim Li Punit has led some researchers to believe that that small site was its ceremonial center. Lubaantun may have been founded by one of its regional neighbors, Pusilha or Uxbenka, to oversee the local natural resources, and to control the trade routes that existed within the region.

A large number of figurine whistles, and the molds to make them, have been uncovered at the site which has led investigators to believe that the site was one for commercial production of these valuable trade items. Also, jade and obsidian from the Central Highlands of Guatemala, along with marine animal remains from the coast, have been recovered which suggests a vibrant trade nexus. Salt has been suggested as an important trade commodity sourced from the coast, while cacao has been identified as a local exchange commodity.

Lubaantun was first brought to the attention of authorities in 1903. Dr Thomas Gann was commissioned by the British Honduras Government to make a report on the site, which was released in London in 1904. He returned in 1924 to conduct further investigations accompanied by adventurer/reporter F.A Mitchell-Hedges, he of the Crystal Skull myth. The myth of the skull is a hoax and will not be further elaborated on here.

R.E. Merwin of the Harvard Peabody Museum conducted an expedition to the site in 1915. He made a detailed map, and carried out a number of excavations. Three ballcourt makers containing eroded, glyphic texts were excavated and removed to the museum.

The British Museum sponsored an expedition by T.A. Joyce in 1926, and was joined a year later by Eric Thompson. The next investigations began in 1970 under the direction of Norman Hammond. Recent restorations and consolidations have been carried out by Dr. Geoffrey Braswell of the University of California, and The Toledo Regional Interaction Project. The site is overseen by the Belize National Institute of Culture and History.

STRUCTURES
Lubaantun is situated atop a leveled hill ridge. It contains numerous plazas, courtyards, and terraces. These are often not level to each other and either short steps or stairways lead up or down.

There are some clear differences here that distinguish this site from typical Maya archaeological zones. The structures here are made from rectangular black slate blocks as opposed to the use of the limestone common in most other Maya construction. Also, the blocks are set together without the use of mortar, and researchers have stated that each block may have been manufactured to fit with the one adjoining it. If this is indeed the case, then a significant amount of additional labor would have certainly been necessary to construct the buildings. Due to this type of construction many of the structures have fallen apart, hence the name of the site. The corbeled arch, so representative of Maya construction techniques, is not found here.

There are five main plazas which include three ballcourts and eleven structures, that constitute the core area of the site. None of the platforms or pyramids supported a temple superstructure of masonry construction. Instead, they were made of a perishable material and therefore no longer exist. No decorative moldings, carved panels, or stelae have been recovered.

The first structure encountered upon entering the site is the East Ballcourt, Structures 21 and 22. This structure is in an unrestored state. Traces of painted stucco have been recovered from within its ruins along with several figurines, and metates (grinding stones).

From the East Ballcourt one steps down into Plaza 5. Its two main structures, Structure 14 and Structure 25 are on the respective south and north ends of the plaza. A second ballcourt, The West Ballcourt, is located off the west side of the plaza. It is also unrestored.

Structure 25 is a three-tiered, platform with each tier exhibiting a recessed terrace before the next level. A central, south facing stairway leads down into the plaza. Residential areas are situated along the periphery of the plaza.

​
Structure 14 is a low, two-tiered platform on the south side of the plaza. A broad set of steps extend up to its leveled surface. The rear of the structure forms the north side of Plaza 4, sometimes referred to as the Central Plaza.

Plaza 4 is of a compact design, and features the three main structures at the site: Structures 10, 12 and 33. It has been suggested that these three structures represent the Three Hearthstones located in the constellation Orion, and which were considered the birthplace of the gods in Maya religious beliefs.

It has also been reported that these structures represent an astronomical “E Group”. A quick calculation has determined that a person standing at the back of Structure 33 would observe the solstice sun rise at the outside corner of either Structures 10 or 12, depending on the time of year. Also, at the equinox an observer in the same spot would observe the sunrise at the inside corner of Structure 10.

Structure 33 is located on the west side of the plaza. It is a square, multi-tiered platform that has been partially restored. Stairways exist on its east and west sides. A raised, stepped platform abuts the south side of the structure.

Behind Structure 33 is a residential area, Plaza 7, also called the Butterfly Plaza. Among the structure platforms here two have been nicely restored; Structures 51 and 52 situated on the west end of the plaza.

Structure 12 is on the east side of the plaza, and is of an elongated pyramid design. It has been partially restored. The lower level exhibits some very fine stone workmanship, with the corners nicely rounded. A central stairway leads up partway to the now ruined summit. The lower stones show the uneven effect of ground settling. A small altar/platform is in front of the structure.

Structure 10 is a pyramidal structure that is in a poor state of preservation. Some small portions show finished stonework, but it is mostly a heap of stone blocks awaiting restoration.

A broad series of steps lead down from Plaza 4 to Ballcourt 4. This ballcourt is the largest at the site, and has been nicely restored. Any superstructure that once existed on either of the two linear platform structures that make up the ballcourt has long since disappeared.

Three ballcourt markers were discovered here during early excavations. These markers depict a scene of two individuals dressed as ball players in the act of the game. While each has an accompanying text, they are too eroded to provide any historical information.

There are numerous other structures that await excavation and restoration. 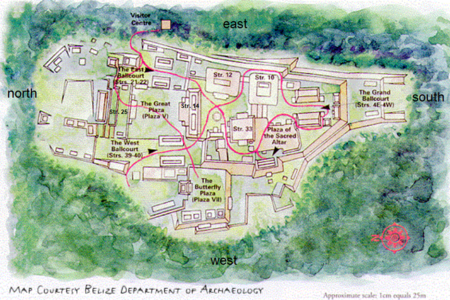 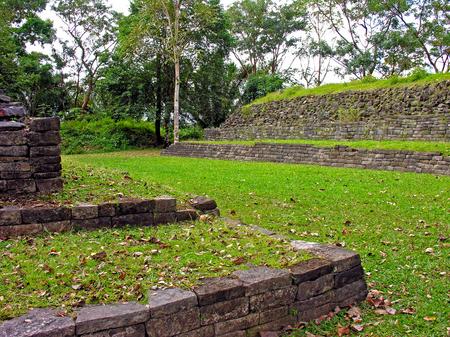 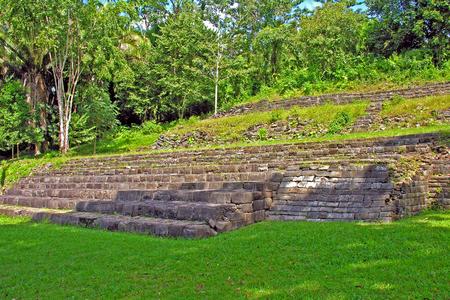 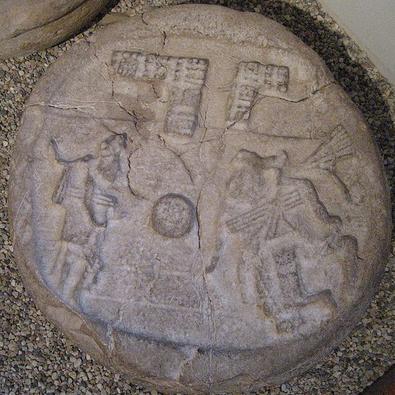 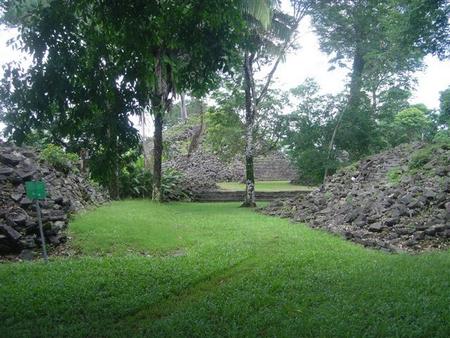 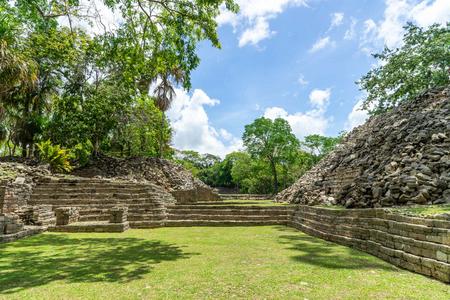 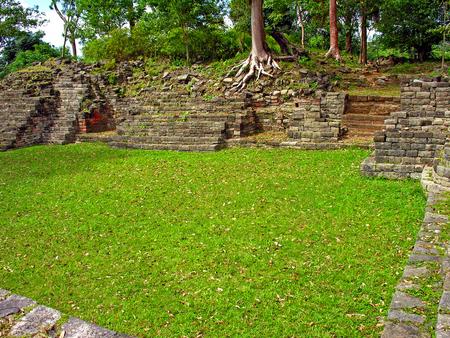 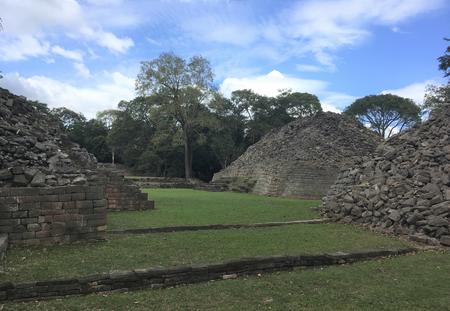 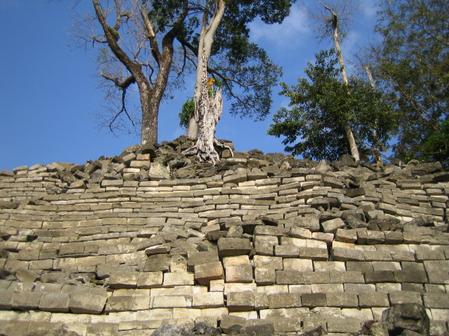 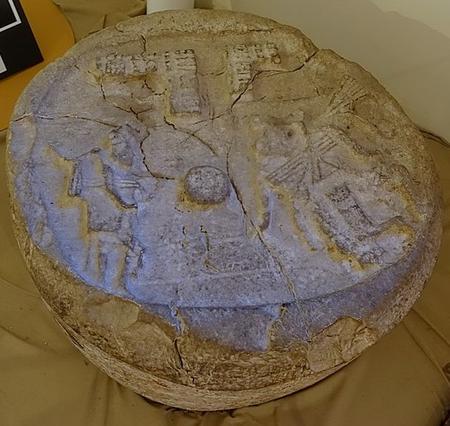 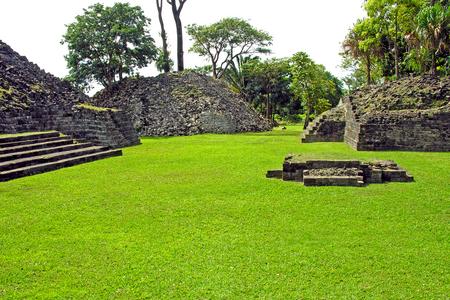