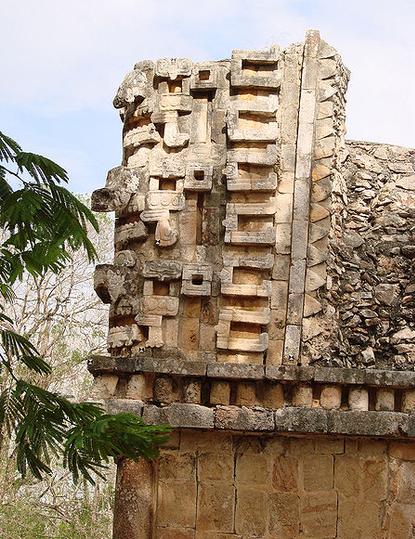 DESCRIPTION
Xlapak (old stone wall) is a compact archaeological zone located along the Puuc Route south of Merida in the western Yucatan just off Highway 261. This site is one of a series of Maya ruins that can be found in the general area and with an architectural style named after the low arid hill country in which they are located. Others are Uxmal, Kabah, Sayil, and Labna. It is located between Sayil and Labna and has some impressive structures..

HISTORY
Xlapak displays a pure Puuc architectural style consistent with the Late Classic Period (600-900 A.D). There have been no stelae (carved stone slabs) recovered here to determine the names of its rulers or its relationship to the other nearby sites.

The site was rediscovered by those intrepid explorers John Lloyd Stevens and Fredrick Catherwood in the 1840’s.  Exploration, excavation and restoration work have restored a few of the structures to their former glory.

STRUCTURES
​There are 3 groups each with a main palace/temple. They are all oriented a few degrees east of north. As is typical with Puuc architecture the walls below the medial molding are plain. Above this are intricate geometric designs made from interlocking finished stone. The corners are surmounted by beautiful, stacked Chaac (Maya rain god) masks that feature an upward curved snout.

This style can be seen on the main reconstructed temple at Group 1, the whole group being set upon a raised platform. It is also called The Small Palace. This is a wonderfully restored one story temple with several entrances. The main façade, facing north, has three entrances. A large, mosaic of three stacked Chac masks appears over the central entryway. Each corner has stacked Chac masks that form free standing towers. Geometric motifs are evenly spaced in between and enclosed by bands of drum colonnetts. Very impressive!

The south side of the palace is a mirror image of the north side, though not as complete, and with just two stacked central Chac masks. A small terrace steps down onto the raised plaza containing some small ruined structures. At the far end of the plaza is a ruined structure here called structure 2 south.

A path leads west about 965 ft/294 meters to Group 2 which is constructed atop a raised platform about 71 feet/22 meters square. The main structure here, the Palace, is on the east side of the plaza, and has been partially restored. It is in the shape of a capital “L”. One can get a good idea of the construction technique used by the Puuc Maya. The core is a rubble mass with the decorative façade mosaics cemented/tenoned onto it.

The west side of the structure, partially restored, faces onto a plaza. It has two entrances and the remains of a third of which a partial corbeled arched chamber remains. A south side wing has been reduced to rubble. The north side is a solid block wall with no entrances. South and west structures ring the plaza but are mere heaps of rubble.

A pathway leads north to Group 3. A rather large platform contains the remains of several structures. A south facing set of steps leads onto the platform. The remains of a single structure on the west side of the plaza has an interesting passageway. The rest of the structures are in too degraded a state to report on. A small site, but worth the visit.

An interesting observation while studying Google Earth is that Labna, Xlapak, and Sayil are in a straight line running east 95.28 degrees a distance of 4.81 miles/7.75 kms. Extended further west 10.25 miles/16.5 kms from Sayil the line passes close by the small site of Xculoc. Deliberate or coincidence? You never know with the Maya. 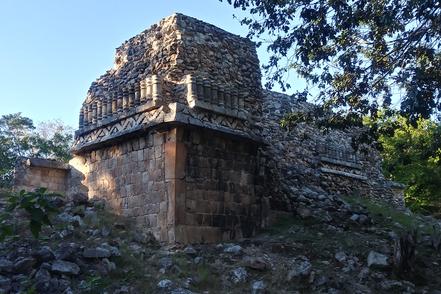 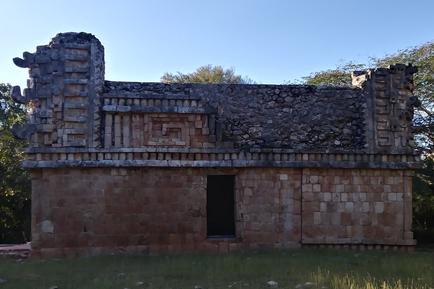 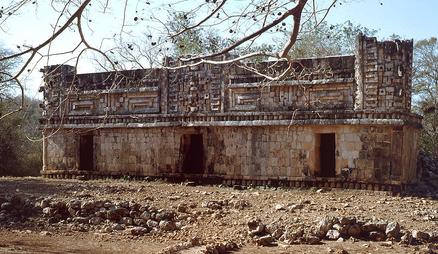 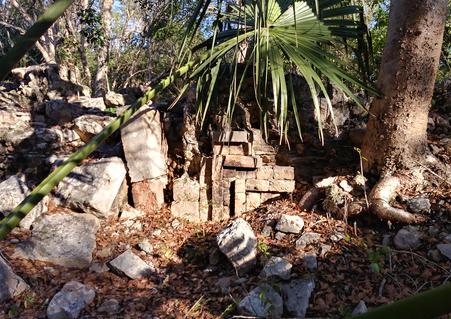 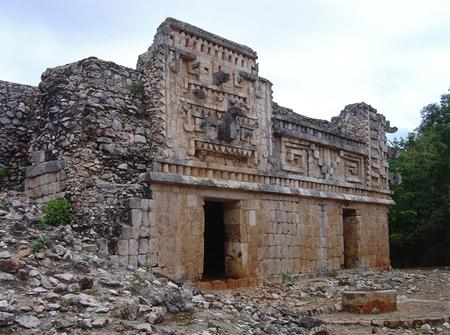 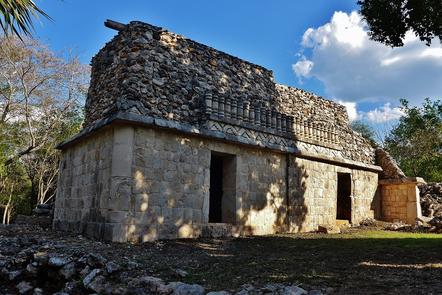 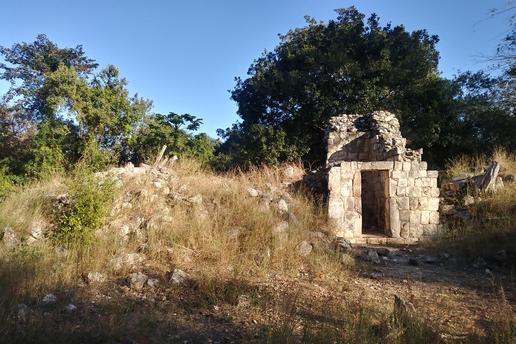 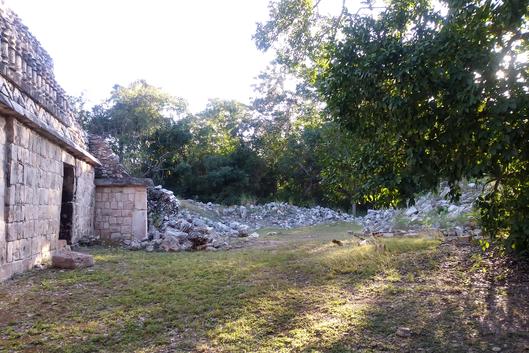 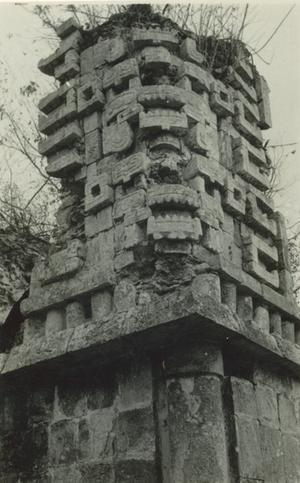 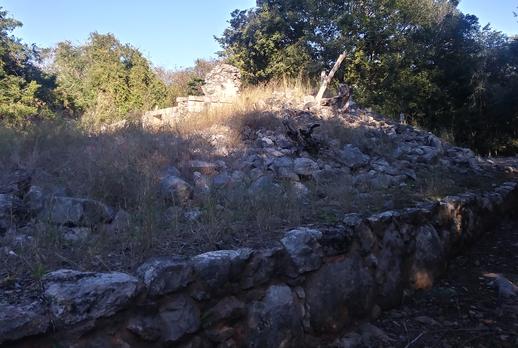 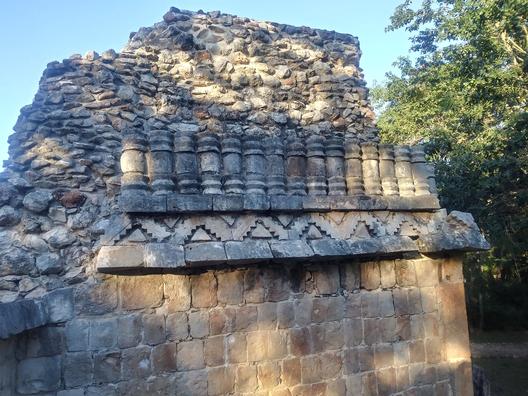 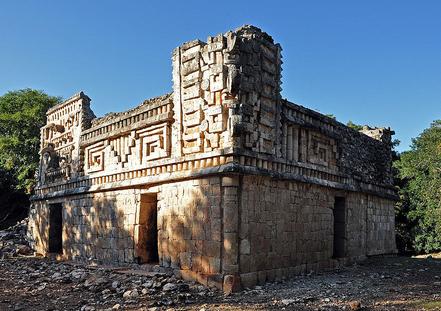 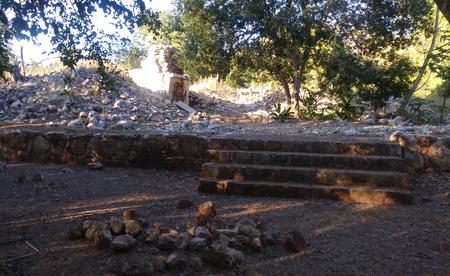 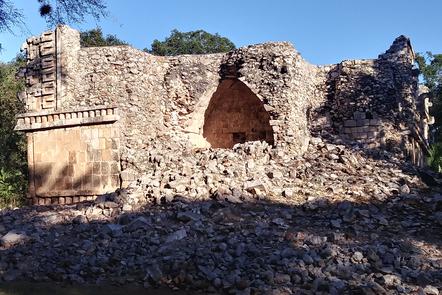 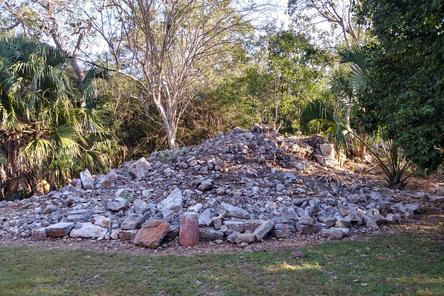 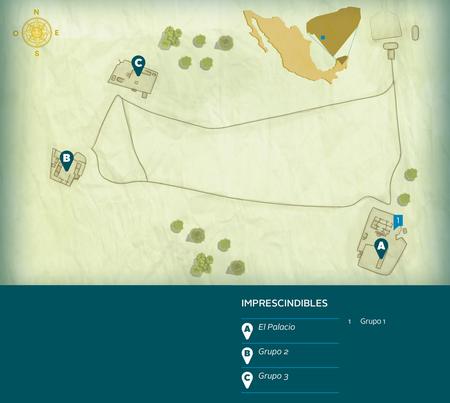 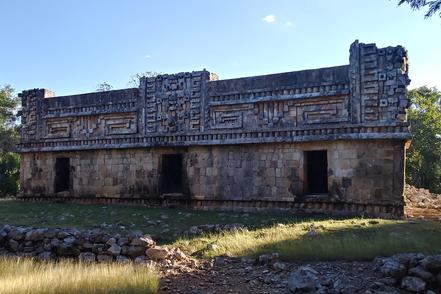 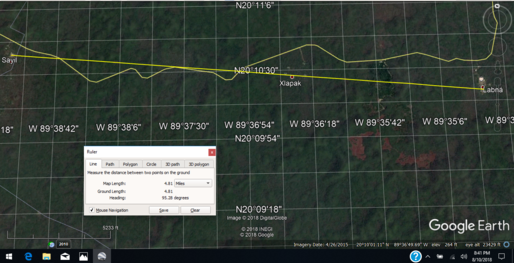