​
DESCRIPTION
Oxtankah, “Center of Three Towns” in Yucatec Maya, is a seldom visited, medium size site just north of Chetumal, capital of the state of Quintana Roo. It is the largest, and most important site discovered in the Bay of Chetumal area, with the main structures located 3000 feet/1000 meters inland from the bay. The excavated core area is concentrated around two plazas, and contains numerous temples, pyramids, palaces, and sunken courtyards, a number having been consolidated and restored. It has an early settlement history reaching its peak in the Early Classic Era (200-600 A.D.). Most of the structures seen today are from this time period, and are of the Peten style of architecture. A number of rich funerary tombs with vaulted ceilings have been discovered here, with many mounds remaining for archaeologist to investigate. The site was inhabited into the colonial era, with the remains of an open air Spanish Chapel in the plaza very similar in design to the one found in Dzibilchaltun.

Oxtankah was established to exploit the ocean resources and salt trade which were important economic commodities for inland sites such as Kohunlich and Dzibanche. The site was protected from the sea by a slender island, Tamalcab, just off the coast and which was a residential area of the site. There is a cenote to the west of the core area that provided fresh water, as well as a few chultuns (underground water storage cells) located within the site.

A small on-site museum has a nice collection of ceramics and architectural elements excavated from the site. Worth a little time to check out.

Oxtankah is located a short drive of about 6 miles/10kms north on the coastal road out of Chetumal. The turn-off sign is to the left and then in about .5 miles/1km. There are many birds and butterflies to greet the visitor walking through the site.

HISTORY
Ceramic evidence and early structures at Oxtankah show a settlement history dating back into the Late Pre-Classic (300 B.C.-250 A.D.). Oxtankah experienced a number of population expansions and contractions throughout its history. The site as seen today dates mostly from its heyday, the Early Classic. There have been no readable stelae or other monuments found here to identify its rulers, or to its political/economic relationships with other sites. There exists, however, a system of lagoons and canals that would have interconnected Oxtankah to neighboring sites, and to the important coastal trade network.

The site was first reported on by Alberto Escalona Ramos in 1937. Excavations and consolidations began in the 1990’s by INAH, and continue to this day.

The Plaza of the Bees is the first plaza encountered upon entering the site. It consists of three main structures oriented to the cardinal directions. Structure I is situated on the east side of the plaza. It is a truncated 4-tiered pyramid crowned with a one-room temple, and dates from the Early Classic. The entrance to the temple faces west onto the plaza. Two tombs of high ranking individuals were located beneath the temple floor. An additional construction phase took place about 1000 A.D.

Structure IV is a spacious three-level platform that is located on the west side of the plaza. The partial remaining walls of four rooms are located on its summit. The arrangement of the rooms forms a maze which may have been used for ritual purposes, or for privacy. The single entryway to the rooms has a nice, red molded stucco decoration which runs just below it and that has been interpreted as a jaguar deity. The top of the structure is protected by a palapa overhang.

Structure III forms the south side of the plaza. This is a palace type structure built atop a long low platform. In the center of the plaza is a rock lined altar. Beneath the altar a tomb of a single individual was discovered and dates to the Late Classic (600-900 A.D.). The area has been restored with a replica of the skeletal remains of the individual viewable under a palapa roof.

Just south of the Plaza of the Bees is the Plaza of the Columns. There are three main structures here that have been excavated and restored. The most notable structure here is Structure VI, a truncated pyramid. Three tombs of Oxtankah’s elite have been discovered within the pyramid. The rich funerary goods included a jade necklace, a red shell mask, and polychrome ceramics.

Structure IX is on the west side of the plaza. It is also known as the Palace. This structure exhibits a number of construction phases, the first dating from the Early Classic. It features two, low platforms with rooms and a corridor separating them. A later construction covered parts of the earlier one and consisted of four rooms, three being royal residences and the fourth a food preparation area.

Structure X completes the north side of the plaza. It is a low platform with a single central stairway that leads to two upper rooms.

Further to the south are a number of plazas awaiting to be excavated and restored. These include: Plaza Manati, Plaza Armadillo, and Plaza Tucanes, among others.

Returning north near the exit is another plaza group, Kanjobal, containing an unusual round platform with a square structure in its center. There is a single stairway onto the round platform, and on an angle, a small stairway to the square structure. This appears to be a combination of construction phases, with the round, earlier one possibly being of an astronomical nature.

The last structure encountered at the site is a Spanish open-air chapel. This structure was built under the direction of Alonzo Davila during his occupation of Chactemal/Chetumal in the middle of the 16th century. Oxtankah was inhabited into the colonial era, and it was Spanish custom to build their places of worship among the ruins of the Maya. Its construction design is very similar to its better preserved and more famous cousin in Dzibilchaltun.. 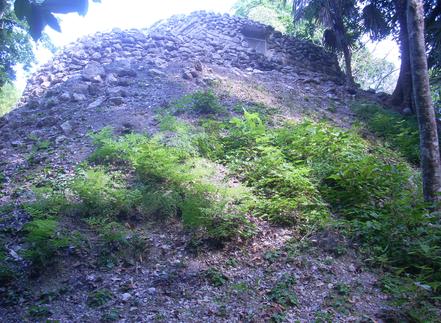 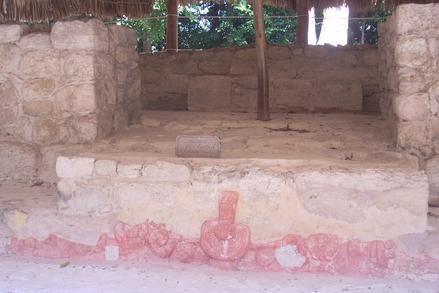 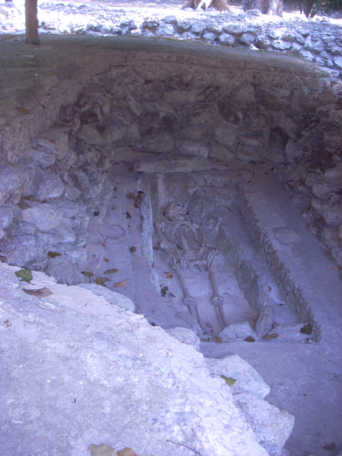 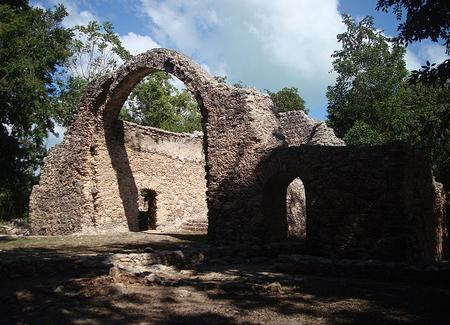 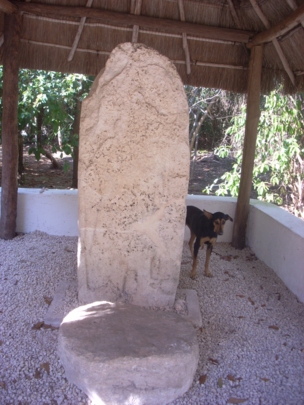 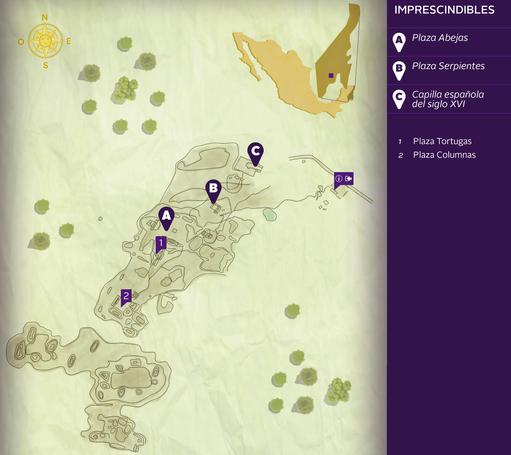 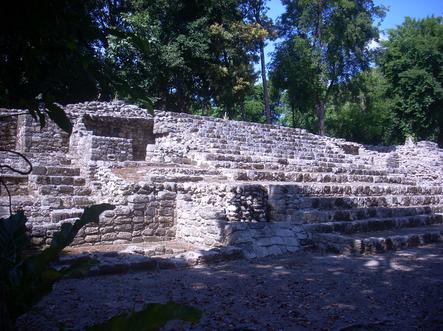 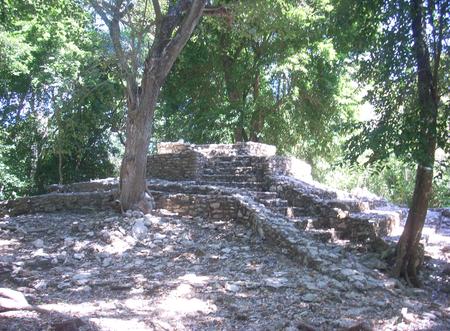 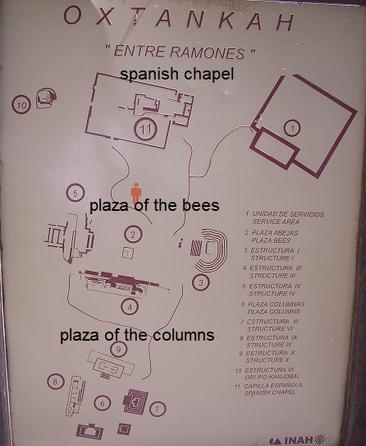 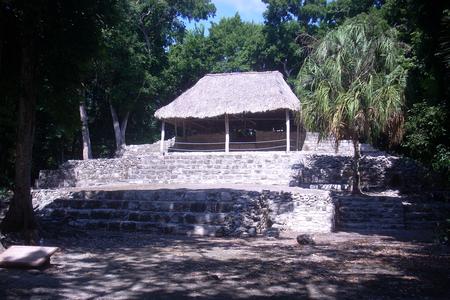 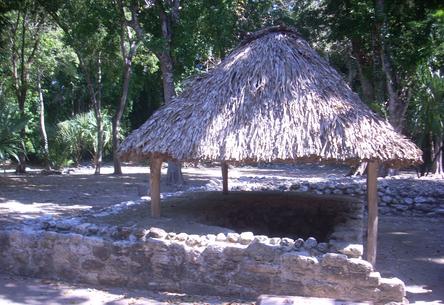 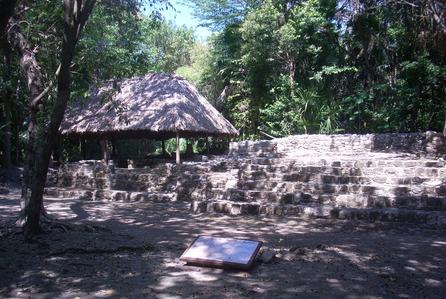 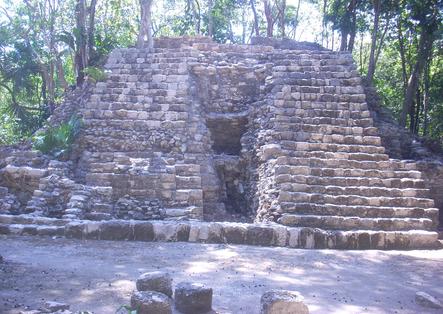