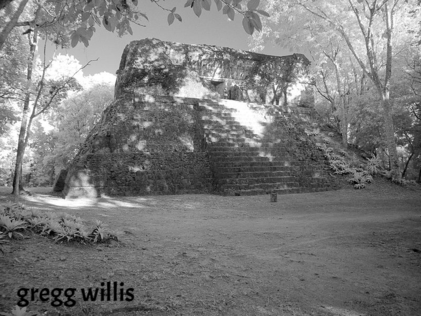 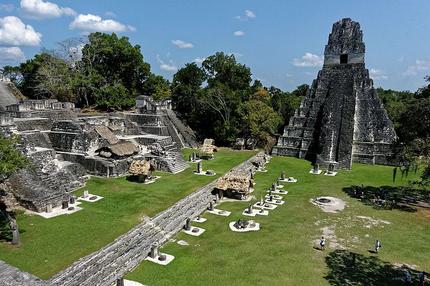 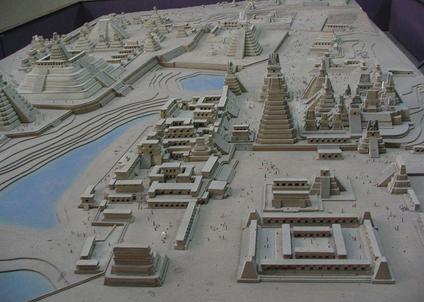 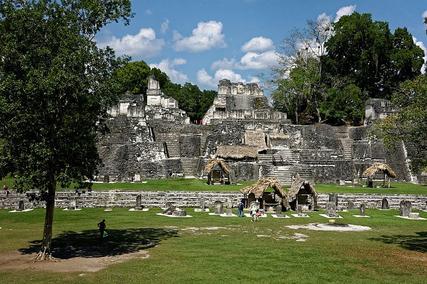 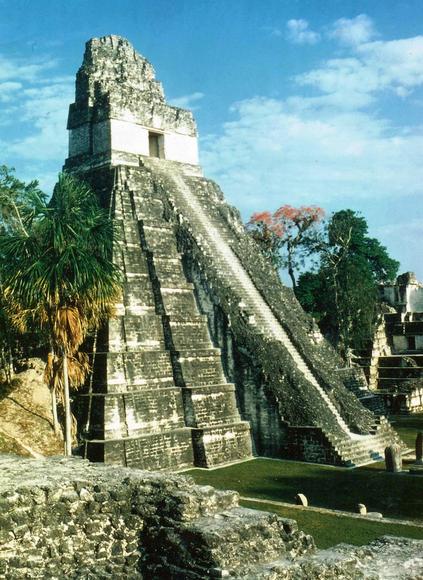 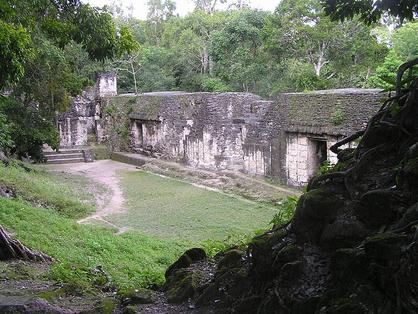 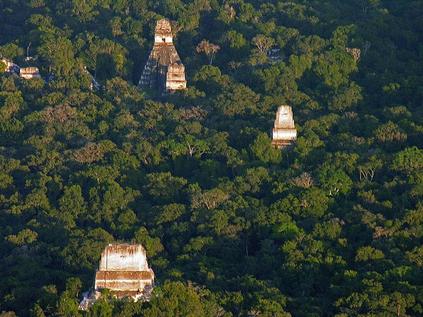 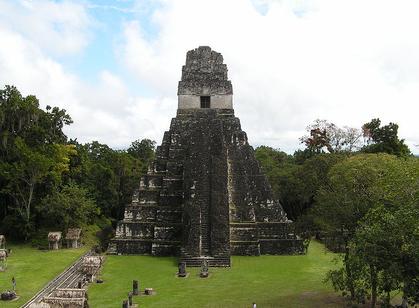 DESCRIPTION
Tikal is one of the preeminent Maya sites with a long settlement history going back to 1000 B.C. It was among the largest cities in all of the Americas. Tikal is located within the Tikal National Park, and was declared a UNESCO World Heritage Site in 1979. Tikal is a modern Maya name which translates to “City of Voices” Its original, ancient name has now been deciphered as Yax Mutal.

It is one of the most studied of the Southern Lowland Maya Sites. A long succession of rulers have been deciphered from the glyphic inscriptions found there, beginning in c. 90 A.D. It is comprised of several architectural groups, containing numerous pyramids, temples, palaces, altars and carved stelae. A study has linked the layout of the city along astronomical lines of sight.

​Tikal is located deep within the Peten tropical rainforest in the Tikal National Park, which in turn is located in the Maya Biosphere Reserve. Tikal is most easily reached by flying into Flores, an island city in Lake Peten Itza. From there it is about 40 miles/64 km to the site. Modern Flores, ancient Tayasal, was the last independent Maya Kingdom to hold out against the Spanish onslaught which finally fell in 1697.Travel to the site can also be made by road west from Belize, or north from Guatemala City.

HISTORY AND EXPLORATION
Tikal was a powerful, regional capital, whose influence extended throughout most of the Maya area. Relationships were also developed outside the Maya area, including the great central Mexican center at Teotihuacan.

Early settlement has been dated as far back to 800 B.C. Monumental architecture commenced by the 4th century B.C. and Tikal reached its zenith during the Early to Mid-Classic (200-600 A.D). Its core population has been estimated at 45,000 inhabitants, but its direct influence has been thought to have extended to over 250,000-350,000 people. While there are some gaps in the historical record, Tikal was continuously inhabited through most of the Post Classic (900-1200 A.D).

The powerful central Mexican city/state of Teotihuacan appears to have been involved with the possible defeat of Chak Tok Ich’aak, Great Jaguar Paw I, king of Tikal in 378 A.D. The leader of this invasion was Siyaj K’ahk’, “Fire is Born”, and he may have been the disgraced brother of Great Jaguar Paw I, and who had been exiled to Teotihuacan. He set up a new king there, and apparently occupied and ruled from Uaxactun, with Tikal becoming an important ally and trading partner with Teotihuacan.

Its eternal rival was the great city-state of Calakmul, and its close ally Caracol, which led to constant economic and political struggles beginning in the 6th century.  These two forces fought a seesaw power struggle over the course of time with each side and its allies defeating the other at some point. This intense rivalry could easily be called “The Clash of the Maya Titans”.

Tikal was decisively defeated by Calakmul in 562 A.D. At this point, and for the next 120 years, Tikal fell into a period of decline with no major construction or recorded activities taking place. Its defeat adversely affected its allies who also saw their fortunes decline.

In 629 A.D, a ruler of Tikal founded the site of Dos Pilas which in turn was defeated by Calakmul about 649 A.D. In 682 A.D. Jasaw Chan K’awiil I initiated a reinvigorated dynasty at Tikal and the city eventually turned the tables on Calakmul and completely defeated it in 695 A.D. Tikal continued to expand under his rule and that of his heir, and much of the architecture seen today was completed by these two rulers. Its economic and political influence extended to sites such as Rio Azul, El Peru, Quirigua, and Copan in Honduras. Tikal suffered the same decline as other cities of the Lowland Maya and by the end of the 10th century the site was mostly abandoned.

Rulers commemorated victories, marriages and Katun endings on the numerous stelae, altars and lintels found throughout the site. These have helped to establish its rich history, including a long list of successive rulers starting with Foliated Jaguar (c.290 A.D) through Jasaw Chan K’awiil II (869 A.D.).

Due to the remoteness of the site it was not explored until the mid19th century. The first written account was that of Modesto Mendez in 1848. Alfred Maudslay and Teobert Maler followed at the end of the century, and Tozzer visited in 1911. Further explorations and excavations were carried out by the University of Pennsylvania from 1956-1970. Excavations and consolidations continue at present.

STRUCTURES
There are a number of important architectural groups that make up the central core of the city. The Great Plaza is situated at the heart of the city which is oriented to the cardinal points. It is flanked by two large pyramid/temples that face each other across the plaza.

Temple I, Temple of the Great Jaguar, is a pyramidal structure located on the east side of the Great Plaza and rises to a height of 154 feet/ 47 meters. It was constructed in the mid eighth century and is a mortuary structure for the great Tikal king, Jasaw Chan K’awiil I, also known as Ah Cacao (Lord Chocolate). There is a temple at the top that contains three chambers, and is surmounted with a roof comb, common architectural features at Tikal.

Across the plaza from Temple I is Temple II, Temple of the Mask, another pyramidal structure which rises to a height of 125 feet/38 meters. It also contains a three chambered temple at its summit with a roof comb, and was built to honor his wife, Lady Kalajuun Une’ Mo’, though no tomb has yet been found.

The Central Acropolis faces onto the south side of the Great Plaza. This was a residential area for the city’s elite built on different levels. At the core of the Central Acropolis is the temple of Chac Toch Ich’aak, Great Jaguar Paw, a mid 4th century ruler. There are several other palace and temple structures associated with this complex and most date to the Late Classic (600-900 A.D.). Between this complex and Temple I is the Great Ball Court.

The North Acropolis is located at the northeast corner of the Great Plaza, and construction commenced here around 350 B.C. This is a huge complex featuring many structures, some superimposed over earlier ones, with steep broad stairways. There were 43 stelae and 39 altars placed in the Great Plaza fronting the Acropolis. It became a large funerary complex for the city’s elite.  A large temple, Structure 34, was built by Siyaj Chan K’awiil II (Stormy Sky) over an earlier temple containing a tomb of his father Yax Nuun Ayiin I (Curl Snout).

The East Plaza is located behind Temple I and contains a ball court and an associated complex. Structure 5D-43, a Temple built over the base of a twin pyramid structure is located here and dates to around 700 A.D.

Temple III, Temple of the Jaguar Priest, was the last pyramid constructed at Tikal, begun in the early years of the 9th century. It has a height of 180 feet/55 meters, and is the third tallest pyramid at Tikal. Wooden lintels were located within the summit temple. It is located just west of Temple II along a sacbe known as the Tozzer Road. The major sacbeob that connect the city are named after the early explorers.

Temple IV, Temple of the Double Headed Snake, is located further west along the Tozzer Sacbe. At the staggering height of 230 feet/70 meters it is the tallest stand- alone pyramid at Tikal, and in all of Mesoamerica. A date associated with this pyramid places its dedication in 741 A.D by the ruler Yaxkin Caan Chak. Here was found a rare carved wooden lintel which commemorated a military victory in 743 A.D. by the ruler Yikin Chan K’awiil.

Temple V is located south of the Central Acropolis. It has a height of 187 feet/57 meters making it the second tallest pyramid at Tikal. It was constructed during the second half of the 8th century and is associated with the ruler Nun Bak Chak.

Temple VI, Temple of the Inscriptions, is located southeast outside the central core of the city. It was dedicated in 766 A.D. Its roof comb reaches a height of 39 feet/12 meters, and has glyphic text carved on three sides.

The Mundo Perdido is a large, semi-enclosed complex located due south of Temple III. It has its origins in the late Pre Classic (500 B.C.-250 A.D.). At its core is a structure with the fantasy name of the Temple of the Lost World. This is a truncated pyramid that rises to a height of 98 feet/30 meters. It was decorated with stucco masks of the Sun god. On the east side of the complex is a group of structures known as an “E Group”. These groups appear at other Pre Classic sites and have astronomical associations.

There are a number of other groups and individual structures found throughout the cleared area of Tikal. Among them: The Plaza of the Seven Temples, The South Acropolis,  Group G, Group H, Group Q, Group R, the Bat Palace and Complex N.

There are numerous stelae that were located throughout the site. Some of the more important ones are mentioned below.

Stelae 29 has the earliest recorded date at Tikal, and indeed of the Maya Lowlands. It has a Maya Long Count date of 8.12.14.8.15, which is equivalent to July 4/6, 292 A.D., and displays a ritual scene possibly by the ruler known as Foliated Jaguar.

Stelae 31dates to January 378 A.D., and announces the accession of the ruler Siyaj Chan K’awill I at Uaxactun. It has glyphs on all four sides, and is the longest text to survive anywhere from the Early Classic Period (250-400 A.D.).

Stelae 11was the last carved stelae to be erected at Tikal. It records a date of 869 A.D., and was commissioned by the ruler Jasaw Chan K’awiil II. 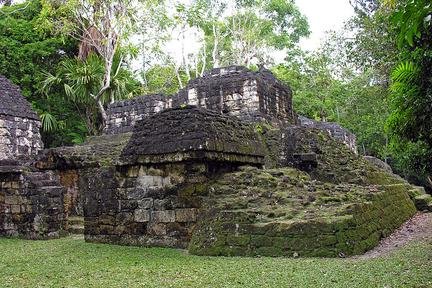 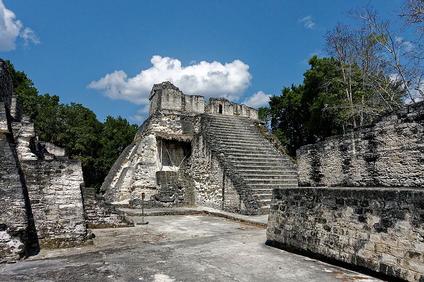 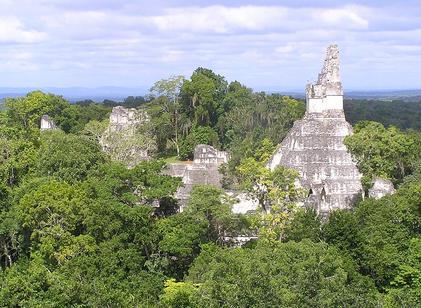 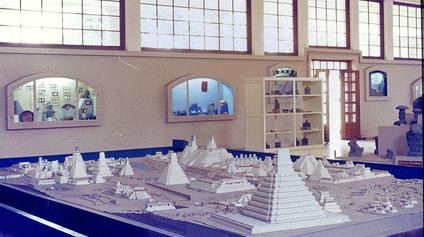