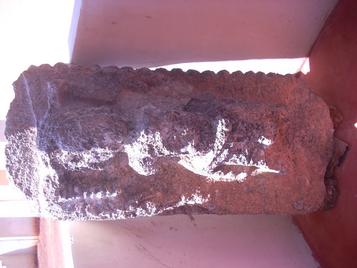 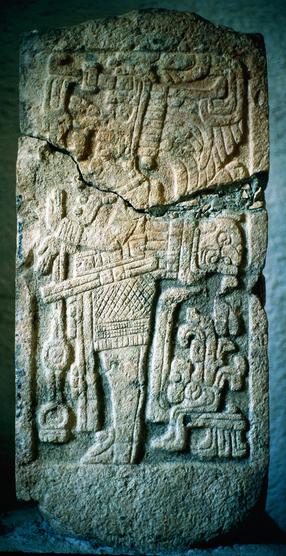 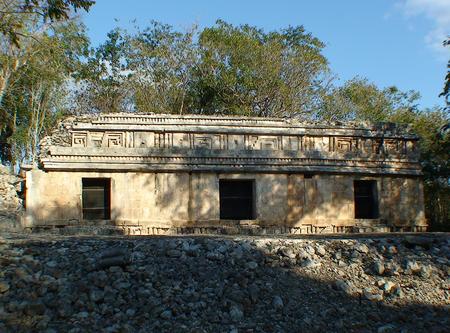 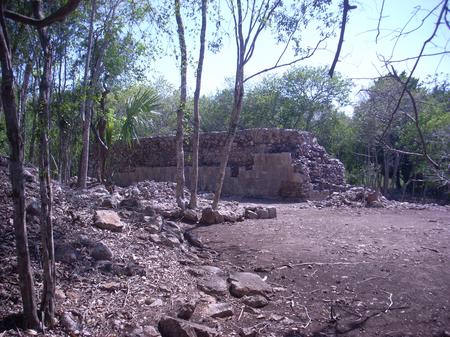 DESCRIPTION
Chunhuhub, trunk or place of the Hunhub tree in Yucatek Maya, is a small Mayan archaeological zone located in the southeastern corner of the state. The name has also been interpreted as “Next to the Snail”. It is set in a valley surrounded by low hills. The fertile soil is known as “Kankab”, red earth, and was an important agricultural asset.  The site dates from the Late Classic Period (600-900), and is noted for its fine Puuc style architecture as is exhibited in the nicely restored Palace.

The INAH kiosk contains some nice stone sculptures and other architectural elements from the site, along with some lazy dogs. Inquire if anyone is around to take you over to the nearby ruins site of Xculoc. Be gracious in your tips.

The site can be reached from the city of Campeche. From the city take Highway 180 north to Hecelchakan. From that town take a road leading east to Cumpich/Bolonchen. Follow this road for about 32 miles/51 kms until it dead ends at Highway 261. Make sure to stop off at the very interesting site of Xcalumkin located on the south side of this road. Take 261 north about 4.75 miles/7.5 kms to the turnoff west towards Xculoc, identified by the blue/white “pyramid” sign. The site is located about 6.5 miles/10 kms on the south side of the road identified by a sign.

From Merida take Highway 261 all the way south through Muna, past Santa Elana, until you reach the turnoff west to Xculoc about 67 miles/108 kms. From there it is about 6.5 miles/10 kms to the site on the south side of the road. Stop off at Kabah alongside the 261.

This whole area is just loaded with ruins, so combine this visit with some other sites. A brief description of Xculoc ruins is at the end of this report.

HISTORY AND EXPLORATION
Chunhuhub has a late, and relatively short history. Ceramic evidence and architecture place the site in the latter part of the Late Classic (600-900 A.D.). The structures are of a pure Puuc design, and of the Colonnette style which was prevalent in the 9th century.

There have been no stela or glyphic inscriptions reported on that identify its rulers or political associations with other sites. It is a city without a history. It is thought, however, to have been under the influence of the much larger and more powerful site of Uxmal just 15 miles/25 kms to the north. The site had close neighbors such as Xculoc to the west, Halal to the southwest, and Itzimte to the southeast with whom it probably had interactions with.

Chunhuhub is first reported on by the dynamic duo of John L. Stephens and Frederick Catherwood who explored the site in the 1840’s. The noted photographer Teobert Mailer visited the site in 1887. There followed Harry Pollock of the Carnegie Institution, Paul Gendrop, Edward Kurjack, George Andrews, and Nicholas Dunning in the early part of the 20th century. In the 1980’s consolidations were carried out by Luis Millet Camara and INAH. More recent investigations have been undertaken by Pierre Becquelin and Dominique Michelet.

STRUCTURES
Chunhuhub comprises several small groups of structures with only one complex having been restored. The groups are oriented mostly on a north/south axis about 14 degrees east of north. The Place Complex is the only group that has been excavated and restored. This complex consists of two structures, Structures 1 and 2.

Structure 1 is also known as the Palace. It is situated on a raised platform on the east side of an irregular plaza. The structure has five chambers accessed by four west facing entryways. The northern most chamber is a double chamber.

The Palace is a fine example of Puuc architecture. The base of the structure features a row of short drum colonnettes interspaced by geometric step fret designs. A single step leads up into each of its four west facing chambers. The medial molding above the entryways is quite intricate featuring a lower row of circular elements, and an upper level of drums. It is expanded outward over doorway number 2. (Let’s see what’s behind there Monty!). Above the medial molding is a frieze that runs the length of the structure. It has mosaic geometric designs interspaced between ribbed colonnettes. Several small sculptures featuring bat motifs were once interwoven within the frieze, but have been removed for safe keeping to Campeche museums. The cornice has a decorative band of small drum colonnettes.

The lower half of the façade of the structure is plain as is typical of Puuc architecture. The only decorations seen there are two geometric panels that flank door number 2. This seems to have been a chamber of importance, and is the only one with a rear entrance.

Structure 2 sits on the same platform as the Palace and also faces west onto the plaza. The design of this structure is nearly the same as the Palace except that it contains only three chambers, and its axis is slightly deviated.

The plaza in front of the Palace complex has an unexcavated, range-type structure on the south side. It sits on a raised platform with a terrace in front. The west side of the plaza is open with only the foundation imprint of a single, small structure evident. The north side of the plaza is also open though a number of rubble mounds, some of notable height, are located a bit further to the north near the entrance. A ball court has yet to be identified.

The courtyard behind the Palace complex is composed of several structures in a reduced state of preservation. A structure on the north side of the courtyard once contained four chambers. Only a single, partial vault is now discernable. The rest of the structures are mostly rubble. The remains of a small platform/altar are positioned in the center of the courtyard.  Other unexcavated groups are located further to the east and north.

The site of Xculoc is located about 2 miles/3.3 kms west from Chunhuhub. The ruins are located upon a low hill overlooking a fertile savannah. Retaining walls feature megalithic stonework. Only one structure has been restored, clearly of Puuc style architecture and similar to the Palace at Chunhuhub. It is in the shape of a capital “L”, and features nine chambers facing onto a terrace. The north side contains five chambers while the west side has four. One entryway on the north side is encircled by a row of nicely carved glyphs. A frieze runs the length of the structure above the medial molding. It consists of numerous colonnettes that were once interspersed by sculptured figures. Three of these figures are now housed in Campeche museums.

A path on the east end of the structure leads up to a courtyard. The partial remains of some structures that once ringed the courtyard are observed. A portion of a wall of the west structure has some interesting incised designs. The rest of the site is extremely overgrown. It is of interest to note that a stela has been recovered from this small site and is now exhibited in a Campeche museum. 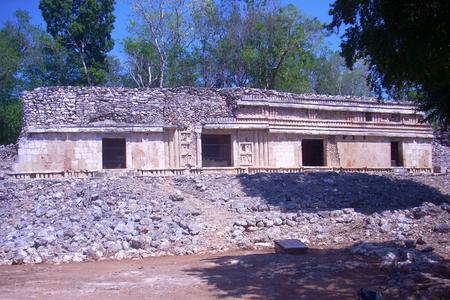 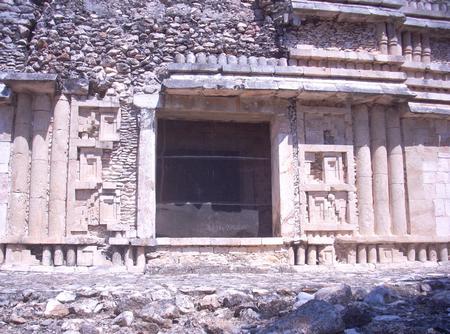 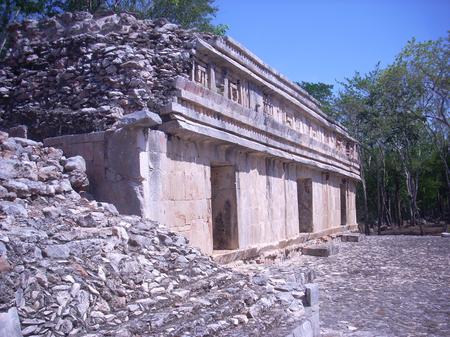 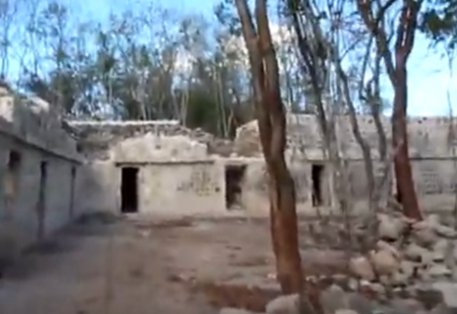 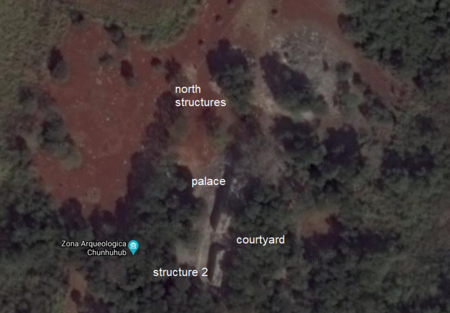 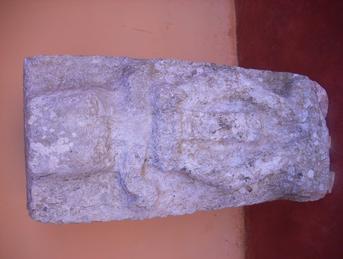 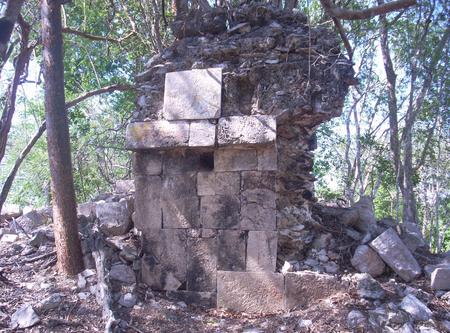 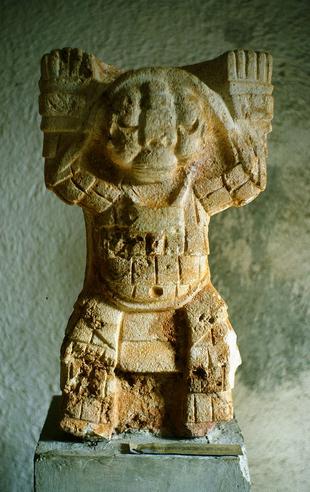 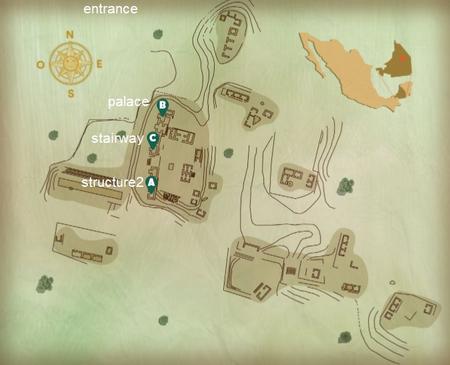 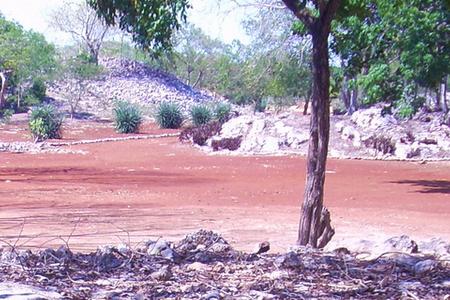 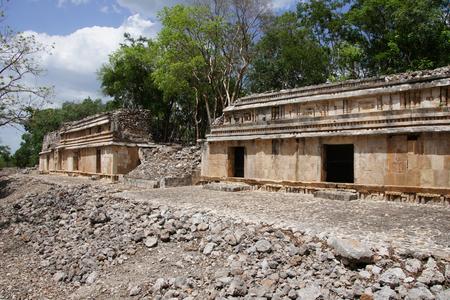 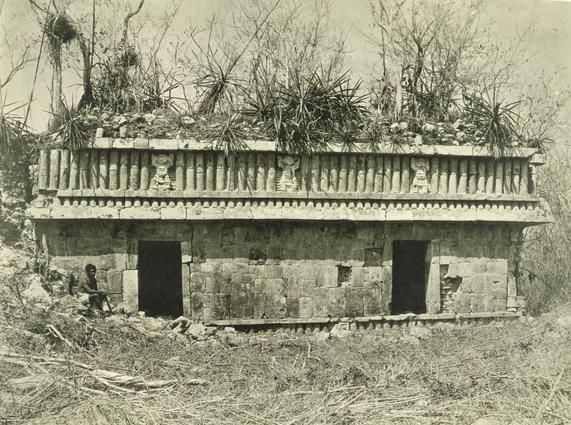 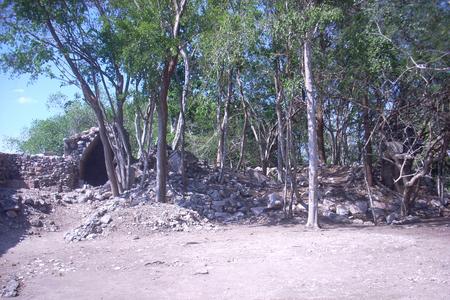 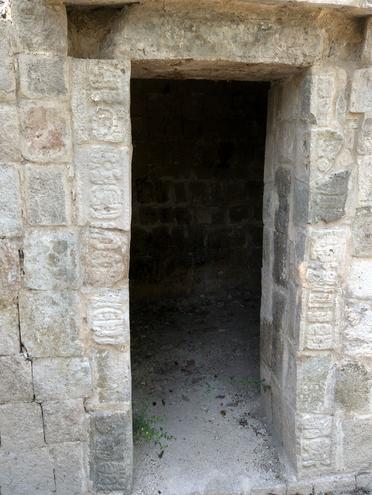 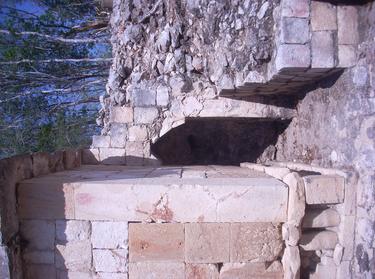 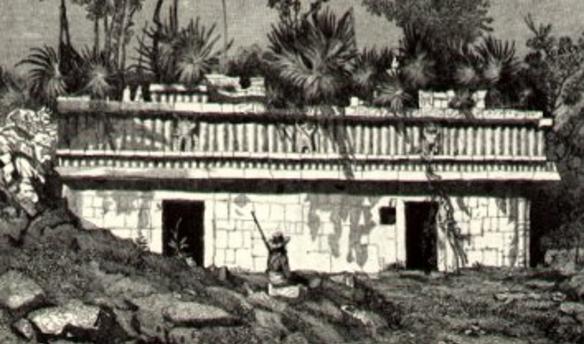