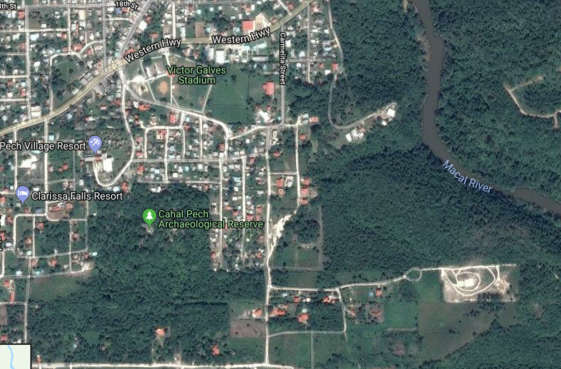 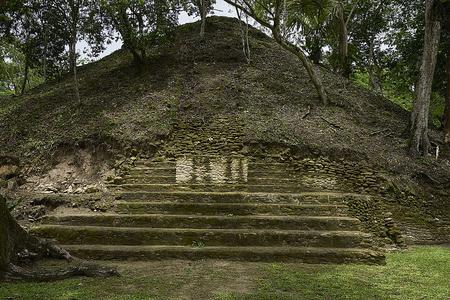 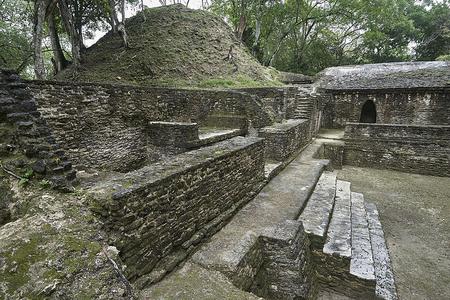 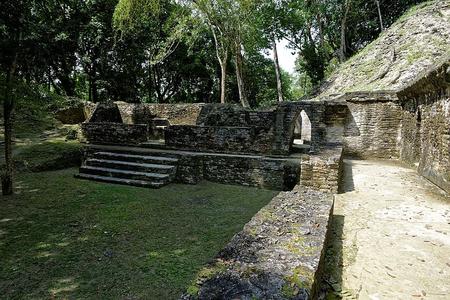 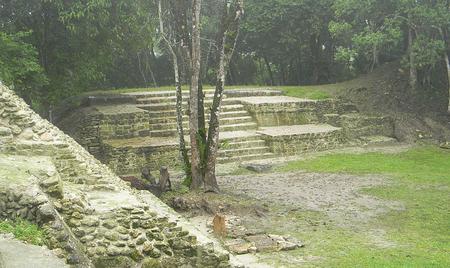 ​passageway between A4 A5   denis barthel. 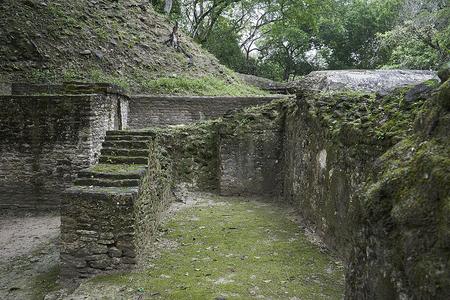 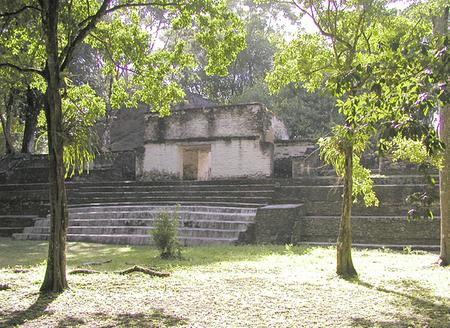 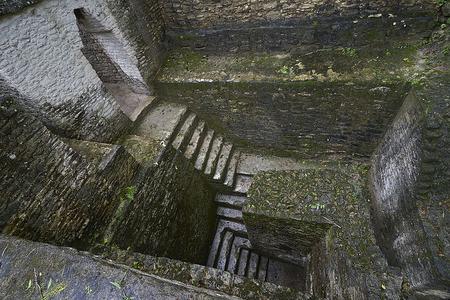 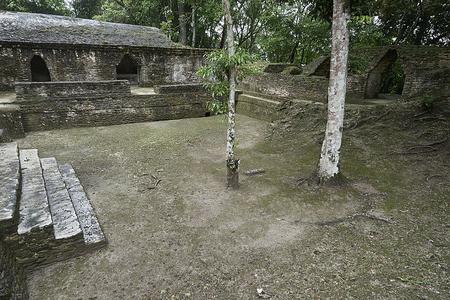 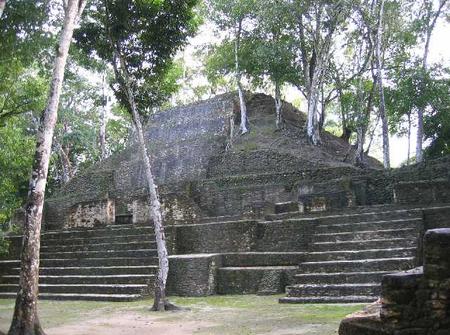 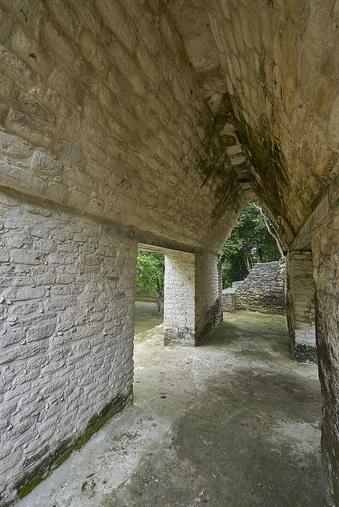 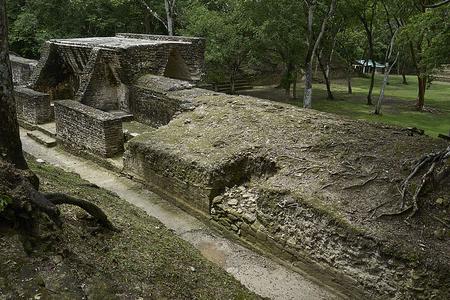 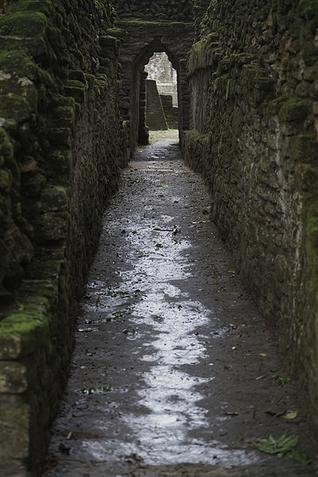 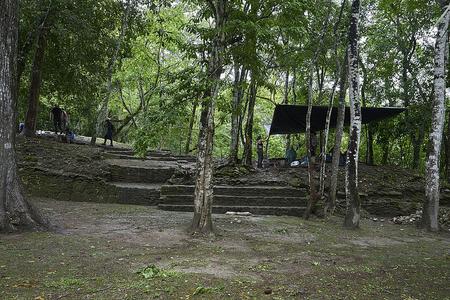 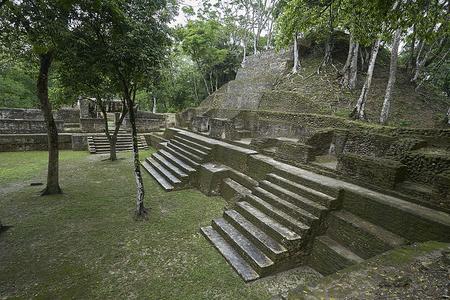 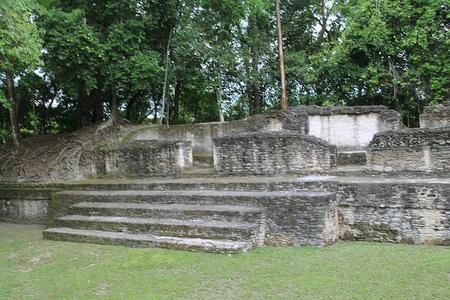 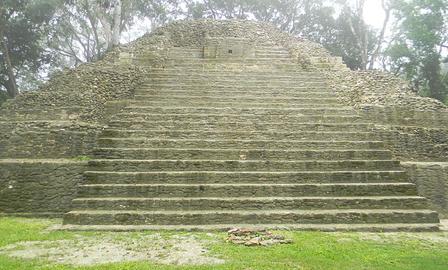 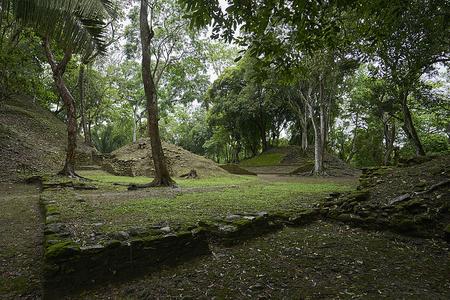 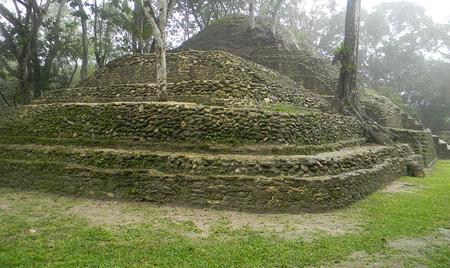 DESCRIPTION
Cahal Pech (Place of Ticks in Yucatec Mayan) is a noteworthy archaeological zone located within the town of San Ignacio. It is situated on the ridge of a high hill overlooking the Macal River. This vantage point allowed the site to control not only the trade on the river, but the rich, fertile valley to the north.

The site has a long settlement history beginning in the Early Pre-Classic (1300-1000 B.C.). The site encompasses 22 acres/8.8 hectares, with the core area much smaller. It is set up on a SW/NE axis. It has 8 interconnected plazas containing pyramids, temples, stelae, ballcourts, and elite residences, counting 34 structures so far detected. The site and surrounding area reached a peak population of 10-15,000 inhabitants during the Late Classic (600-900 A.D.).

HISTORY AND EXPLORATION
Ceramic and other cultural evidence places the beginnings of Cahal Pech to a very early 1300-900 B.C. date. These early inhabitants built large circular platforms that were used for ceremonial purposes. They carved Olmec style symbols on their pottery and imported jade and obsidian from Guatemala. Ceramic female figurines were produced along with decorative beads made from Conch shells brought in from the Caribbean coast.

The Middle Pre-Classic (600 B.C.-300 B.C.) saw the beginnings of masonry architecture which reached its apogee during the Late Classic (600-900 A.D.). Most of the structures seen today date from the Late Classic. The site experienced the same collapse as other Lowland Maya sites, and was abandoned by 900 A.D. No carved stelae or other glyphic writing has been discovered so far to help in identifying its rulers or political connections to other polities.

While the site was known to the local inhabitants, no research was undertaken until the 1950’s by Litton Satterthwaite of the University of Pennsylvania. There followed investigations by Gordon Willey, Peter Schmidt, Joseph Ball, and Jennifer Taschek. Current excavations and consolidations are being carried out under the direction of Jamie Awe, director of the Belize Institute of Archaeology, and Mat Saunders of AFAR, with the Belize Valley Archaeological Reconnaissance Project. Mat is the organizer of the successful and informative Maya at the Playa and Maya at the Largo conferences held each year in the U.S.

STRUCTURES
The site is entered from the north into Plaza B, a large, slightly raised plaza. On the west side of the plaza a huge, raised platform forms the base for Plazas A, D, and E. This complex was the civic/ ceremonial heart of the site, and also an elite residential area. A central stairway leads up from Plaza B to Structure A2.

Structure A2 is a multi-roomed, range-type structure that acts as a formal entrance into Plaza A. It contains a nicely preserved, arched hallway. The second vaulted hallway’s roof has collapsed. The structure seen today is the third construction phase, with the first phase being a Pre-Classic platform. A single stairway at the rear leads down into Plaza A.

Plaza A has 5 structures arranged about it. Structure A1, is a multi-tiered pyramid on the south side of the plaza. It is the largest structure at the site, rising to 79 feet/24 meters in height. A short, central stairway from the plaza level leads to a terrace containing a series of rooms once vaulted. A broad stairway has been excavated on the east side of the structure which leads to the summit. It was constructed around 500 A.D., with its substructures dating to the Late Pre-Classic (300 B.C.-250 A.D.).

Structure A2 as already mentioned, forms the East side of the plaza. Structure A3 (north) and A4 (west) are very similar one-story constructions that probably served in a civic manner. They each have a central stairway, are multi-roomed and roofless. Structure A5 (southwest) is in a mostly unrestored state.

A west stairway leads down to ground level and to an unrestored ballcourt. A single stairway between Structures A1 and A4 leads into Plazas D and E.

Plaza D has 3 structures and is in a partially restored state. The east side of the plaza is taken up by the pyramid, Structure A1.

Plaza E is a wonderful example of Mayan residential design, and forms the SW corner of the complex. It is built on multiple levels containing corbeled stairways and rooms, and numerous passageways. There are 3 structures set around the plaza, with Structure E1 being the most notable. It has two entryways, one with a stepped vault which leads to a vaulted room. A twisting stairway leads down from the east side into Plaza F.

The West side of Plaza F is taken up by the the lower portion of Structure E1 exhibiting some aesthetically pleasing vaulted and traditional doorways. Other structures around the plaza have been partially restored. An entryway is located on the north side of the plaza which leads back into Plaza B.

Plaza B, the largest at the site, contains several structures situated around the plaza. The most important here are Structures B1, B2 and B3 on the east side of the plaza. These three have been identified by researchers as a “E Group”. This designation was first identified at the site of Uaxactun to describes a three-structure complex built along astronomical lines that denote the solstices and equinoxes. The remains of three stelae are set in front of each structure. The opposite side of these structures face Plaza C.

Structure B1 is the largest, and the central member of the group. It is a partially restored, truncated pyramid. A broad, central stairway rises to the summit. At least 12 burials have been discovered within the structure. Items recovered include exotic trade goods such as obsidian, jade, ceramics, an intricate jade and shell mask, and a turtle shell with hieroglyphic inscriptions. A partially excavated stairway faces onto Plaza C.

Structure B3 abuts the southside of B1. It is smaller in height and has a plaza facing central stairway. It is partially restored and retains some nice original stucco on its west side. Structure B2 is on the northside of B1 and its stairway is located on the opposite side facing Plaza C.

Structure B4 is located on the southeast corner of the plaza. It is an elongated, tiered platform with a central stairway. Stylized masks flank the stairway. This is one of the earliest structures at the site dating to 600-300 B.C. A passageway between Structures B4 and B3 leads into Plaza C.

Plaza C is located to the east of Plaza B. It has at its center a partially restored ballcourt; Structures C4 and 5. There are2 stelae and one altar located within the plaza. Four other structures that surround the plaza have yet to be restored. To the north of Plaza C is Plaza H. This plaza has received scant attention and remains mostly unexcavated. 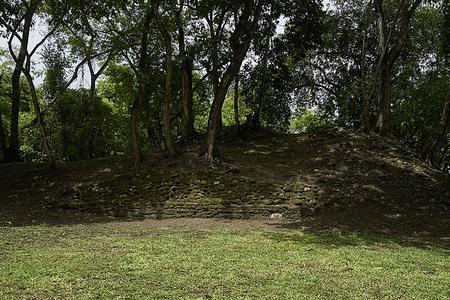 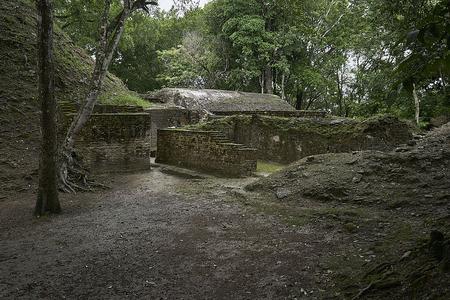 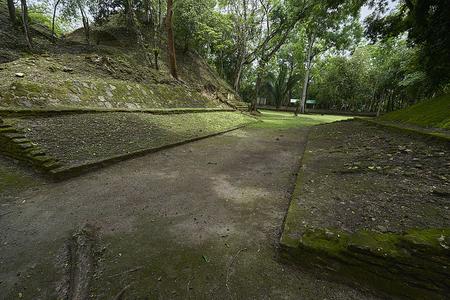 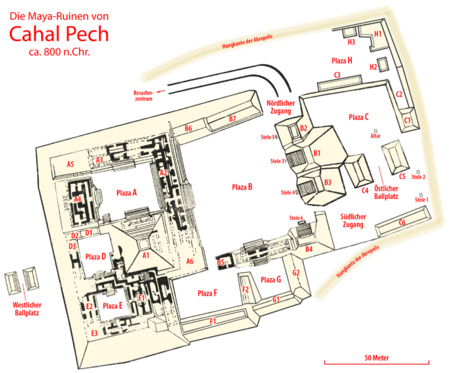 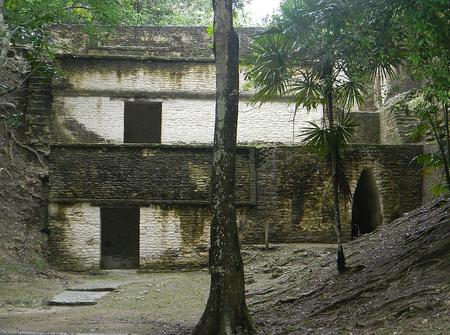 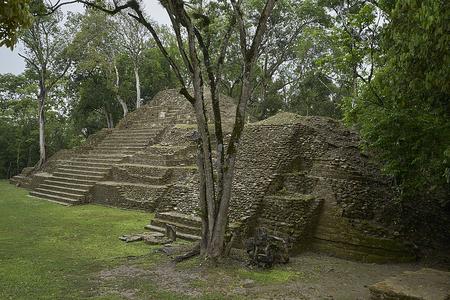