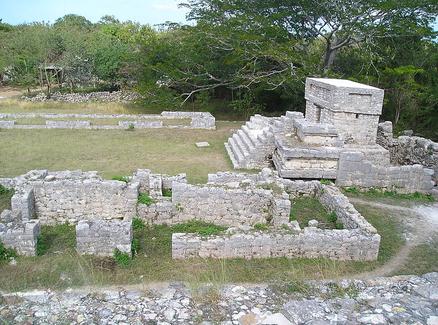 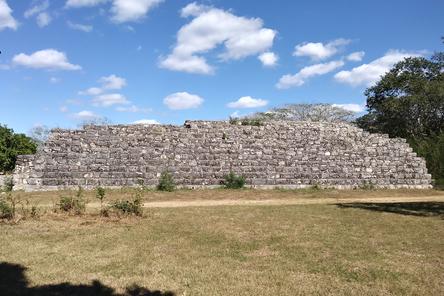 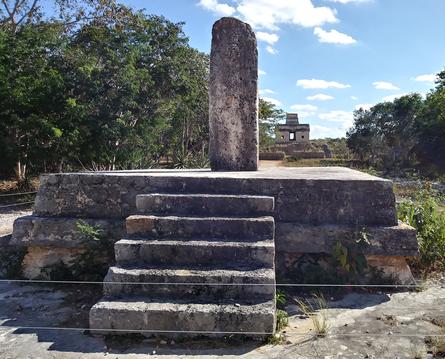 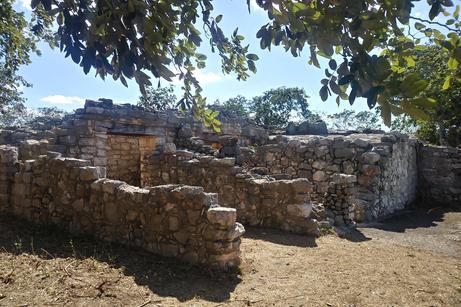 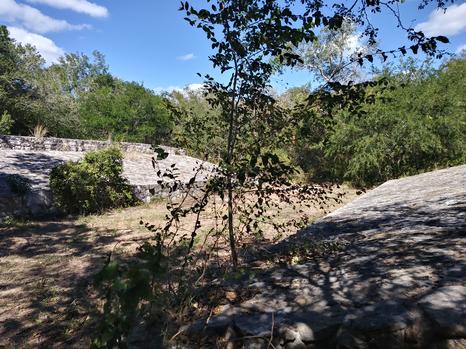 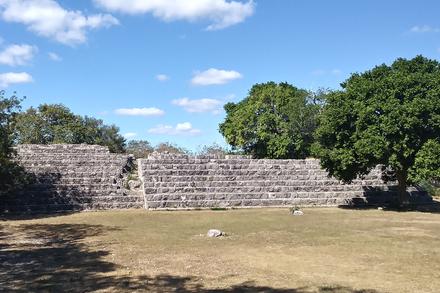 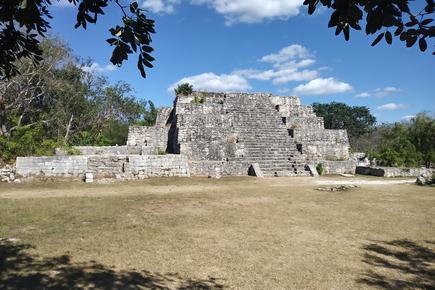 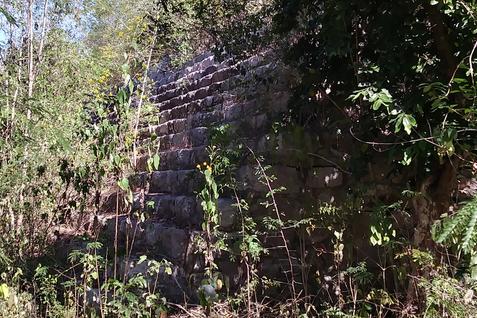 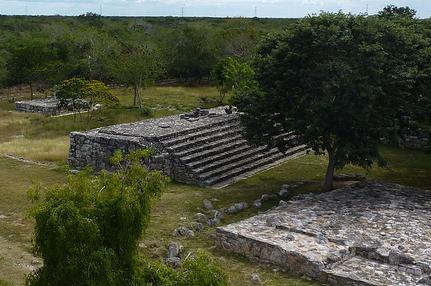 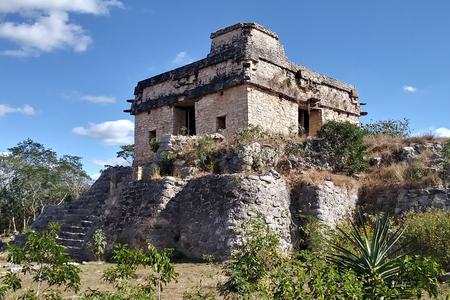 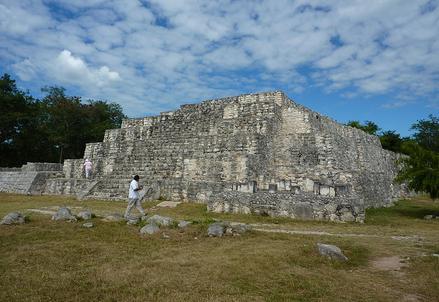 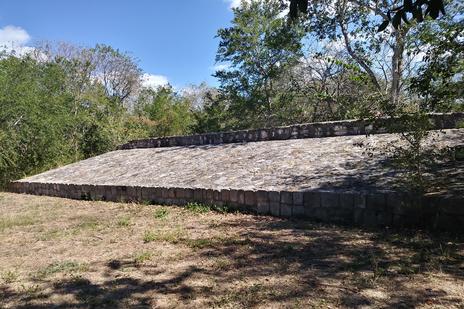 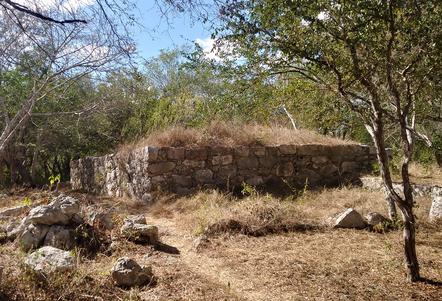 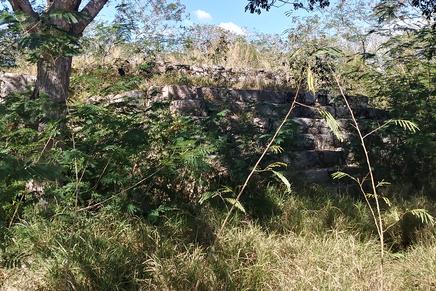 ​Dzibilchaltun was originally known as Ch'iy Chan Ti'Ho. This well-known site is renowned for the appearance of the sun shining through the doorway of the Temple of the Seven Dolls on the spring equinox. The ruins are a short drive north from Merida just off Highway 261 on the turnoff to Chablekal. The site at one time covered approximately 12 sq. miles/19 sq. kms, however the current core zone is much smaller and easily visited.

It has been estimated that upwards of 40,000 people inhabited the site and surrounding area. There are three main plazas in addition to the Temple of the Seven Dolls which is located at the east end of a long sacbe (raised stone causeway). Apart from being an archaeological zone it is also a National Ecological Park.

The site has a fine museum with numerous stone monuments and statues found at the site and surrounding area, along with a complete history of the Yucatan with an emphasis on the Caste War 1847-1901. Well worth a visit. There is a small restaurant as well.

History and Exploration
Dzibilchaltun is among the oldest sites on the Yucatan Peninsula dating back to as early as 500 B.C., and was still inhabited at the time of the Spanish Conquest making it one the the longest term populated sites in the Maya World. It is thought that the city was founded for exploiting the sea salt flats that are found along the nearby coast. Salt was a major Maya trade commodity, and the flats are still commercially worked today. Most of the buildings date from the Late Classic through the Terminal Classic period (600-1150 A.D.).

The first organized excavations of the site were carried out in 1956  by the National Geographic Society, and the Middle American Research Institute of Tulane University, though the site had been reported on earlier. Other investigations were carried out in the 1960's and 1980's. There has been recent restoration work, notably to the southwest and west plazas under the direction of Ruben Maldonado of INAH.

STRUCTURES
​The principal structure here is known as the Temple of the Seven Dolls, named after an offering found within the building. This is an early structure that had been covered by one of a later date. Due to the poor condition of the later building most of it has been removed to expose the well preserved temple found underneath. It is a square structure oriented to the cardinal points with entry openings on all four sides, and windows on the east and west sides. Inside is another square support chamber.  It is built atop a two-tiered platform. A frieze of stucco masks and other elements once decorated the exterior.

The building is renowned for the appearance of the sun at sunrise which shines directly through the east/west door openings of the temple during the vernal equinox. This was a significant agricultural and calendrical marker for the Maya. The temple is the central structure of its own plaza, and is located at the eastern end of Sacbe 1. The sacbe itself runs east/west and is .4miles/.64 kms in length from the Main Plaza, Plaza 1.

The west side of the temple plaza is made up of 3 structures similar in design and set on a north/south axis, each with double hallways, and having 3 entrances. There is a small single hallway structure just to the north. To the southeast of the temple is another small structure also with a double hallway. To the east of the temple is a single roomed structure with 3 entrances. Under the floors of the west structures numerous offerings were found containing sting ray spines, shells, obsidian, and objects made from green stone. The structures date to around 800 A.D.  On visits during hot summer days take the alternative route through the surrounding sub-tropical low forest.

Heading west on Sacbe 1 towards the Main Plaza is Structure 12 set in the middle of the sacbe. A worn, plain stela is set upon a platform base with short stairways on all 4 sides. It would appear that at Dzibilchaltun the necessary artisans to carve stone stelae were not always readily available. Which raises an interesting question. How and where, were artisans trained and employed? Were they mobile, going from site to site offering their services? Did visiting master craftsman give on-site instruction classes? Building these structures and monuments were massive undertakings. At any rate, it is probable that most of the plain stelae here were once covered with a coating of stucco, and then inscribed with the necessary information. Nonetheless, a few carved stelae are found at the site containing, among other historical information, a date of 830 A.D.

On the south side of the sacbe further westward are two areas of structures of a residential nature. They are mostly unrestored, but worth a look.

Just prior to arriving at the Main Plaza are three stelae on square platforms on the south side of the sacbe. This area is known as the Stelae Plaza. They are set up in a very deliberate manner about 100 feet/33 meters apart on a north/south axis. Again, these stelae are worn and plain. It would have been interesting to know what history they once recorded.

The very large Main Plaza measures 437 feet/133 meters x 343 feet/105 meters. Its surface was once completely covered with a layer of white stucco. It is anchored on the northeast by Structure 36. This is a four-tiered pyramid with a central stairway and rises to a height of about 33 feet/10 meters. In the center of the plaza is a 16th century open air chapel, a common practice of the early Spaniards. An interesting, and perhaps unique feature here, is that all the structures in the Main Plaza, excluding Structure 36, have plaza facing stairways that run the entire length of the structure.

Structure 44 is a wonderful structure of 425 feet/129 meters in length, on the south side of the plaza, with a continuous stairway that runs its entire length. It has a platform base that rises up 14 steps to the top, about 15 feet/5 meters. Very impressive! This structure was presumably of a civic/administrative nature with equal access to the two parallel hallways that run the length of the top of the platform. There are 35 entryways that open into the hallways. It has a near identical twin at the site of Edzna named the Nohoch Na.

The east side of the plaza consists of 3 structures. Structure 42 is the most notable, set on a long, raised platform with a west facing terrace. Backing the terrace are a number of multi roomed structures. A tomb of a 9th century ruler, Kalom Uk’uw Chan Chac, has been discovered here.

The next structure, Structure 41, is a raised platform of about 8 feet/2.5 meters in height.  The broad stairway leads up to a flat surface that has the remains of a central, masonry structure. The final structure is a simple, low, square platform that is placed in front of Structure 41.

On the west side of Plaza 1 is a cenote (natural water filled sink hole), Xlacah Cenote, that was the source of drinking water for this relatively dry site. Numerous ceramic objects have been recovered from its waters indicating its sacred importance. It is used as a swimming hole today.

The northwest corner of the plaza is anchored by Structure 37. This is a raised, rectangular platform about 102 feet/31 meters x 50 feet/15.25 meters in length. The upper level of this structure is flat containing no signs of masonry walls.

Behind Structure 37 is a group of 4 structures collectively known as Structure 38. They form around a small plaza with the east structure being a nicely restored one-room temple. The temple, like the Temple of the Seven Dolls, was exposed from under a later, ruined structure.

A sacbe, Sacbe 2, leads west from the Main Plaza between Structures 45 and 37. Structure 40 is located a short distance away built upon the sacbe. This is a raised, two-level platform of about 6 feet/2.5 meters in height having an east facing stairway. It is in a mostly overgrown state.

Further west along Sacbe 2 leads to the Standing Temple. This is a multi-chambered structure showing the remains of a twin corbeled vault. The sacbe is now completely overgrown making it difficult to access this structure.

A short sacbe branches off Sacbe 2 and runs behind Structure 45 and the cenote. It ends at Structure 55 whic is the formal entryway into the South Plaza. Structure 55 is a low terrace/platform with stairways on both the north and south sides. The central part of the structure incorporates several chambers.

The South Plaza, Plaza 2, underwent some restoration in the early 2000's. It measures 376 feet/143 meters x 269 feet/82 meters. The most significant structure here is Structure 46,  an acropolis style structure with numerous rooms and terraces set on tiered levels. A broad stairway leads down into the plaza. This area has been overtaken by vegetation and is currently closed to the public.

To the east of the South Plaza is a nicely restored ball court. The west side of the ball court may have been originally part of the South Plaza. Further to the west a sacbe, Sacbe 6  leads to Plaza 3, currently closed to visitors. This plaza has a high pyramid, Structure 89, as its main structure.

There are other smaller structures and platforms scattered throughout the site.  A very fine way to spend a full day.
​ 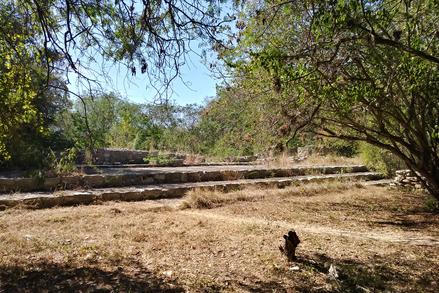 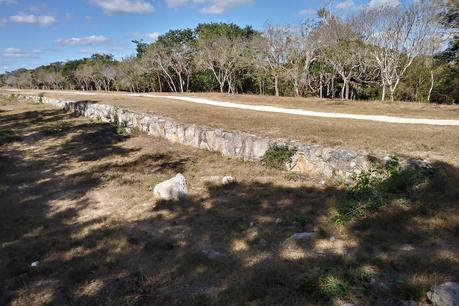 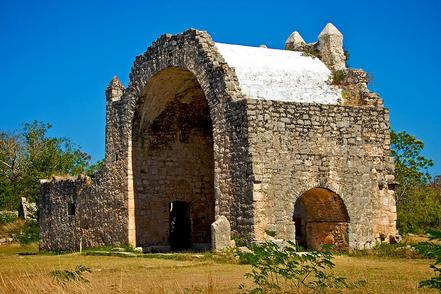 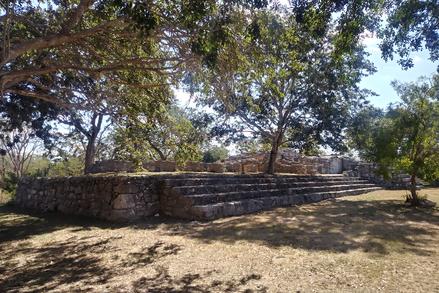 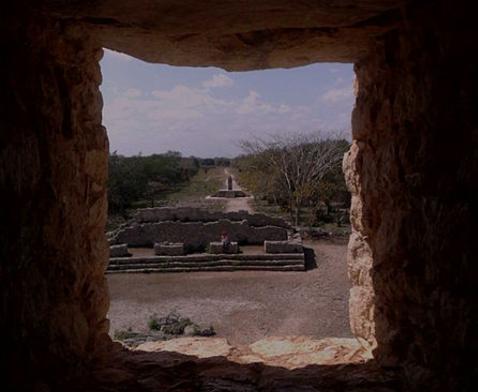 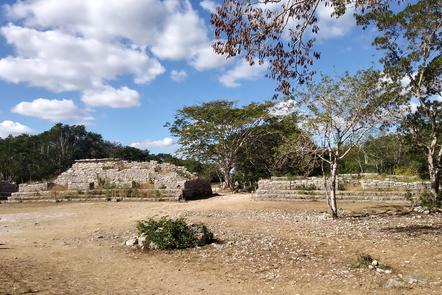 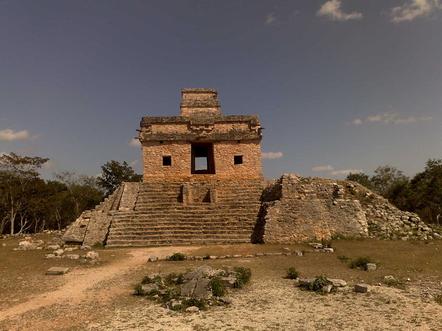 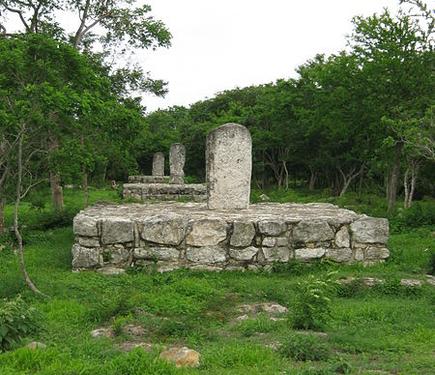 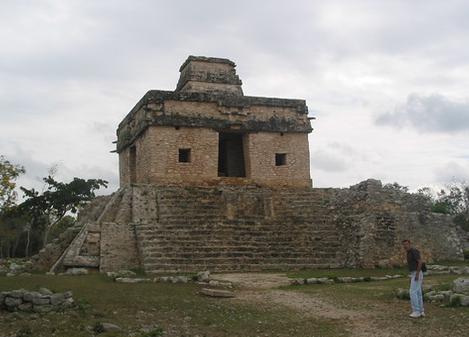 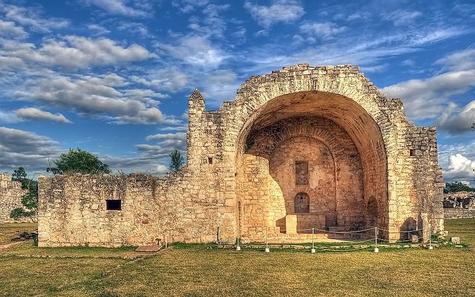 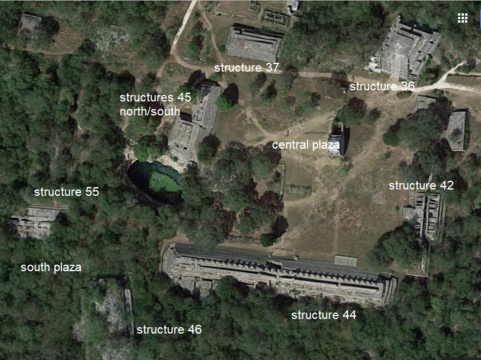