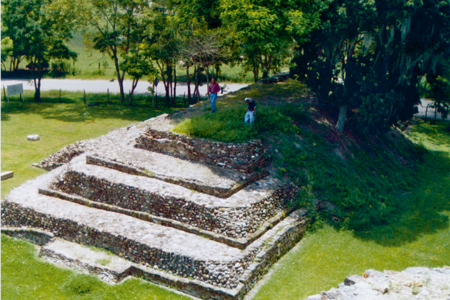 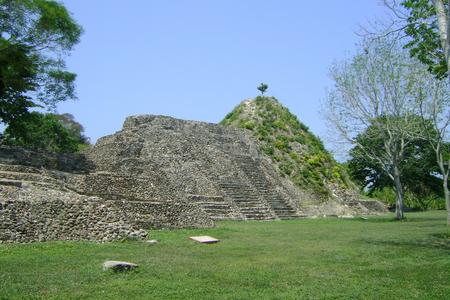 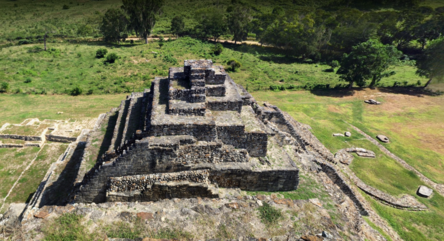 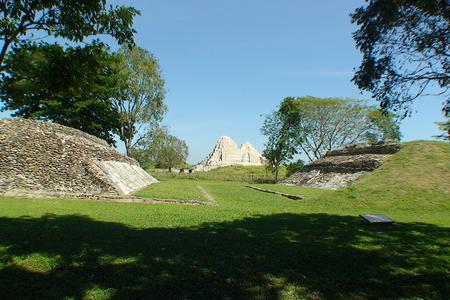 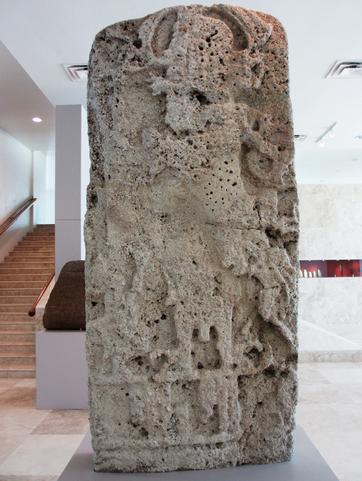 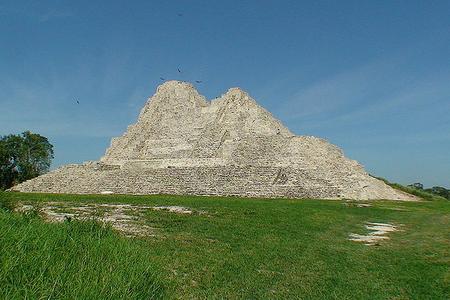 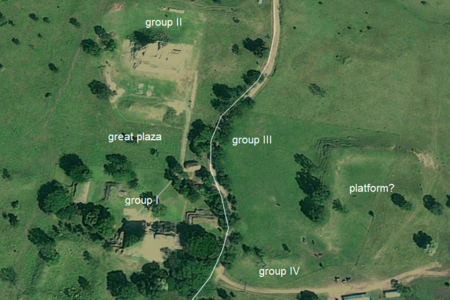 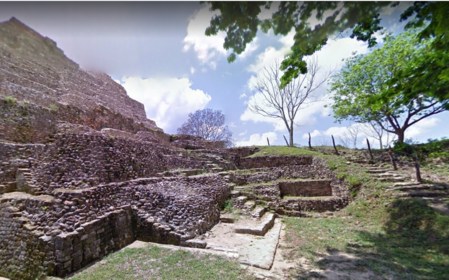 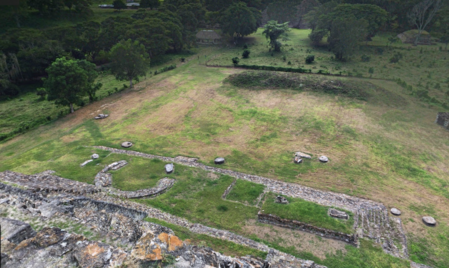 DESCRIPTION
Moral-Reforma is a Mayan archaeological zone situated close by the banks of the San Pedro Martir river within the Cascadas de Reforma Ecological Reserve. The ruins are part of a group of sites located within the Usumacinta River Basin, including such sites as Pomona, Santa Elena, Yaxchilan, Piedras Negras, and Palenque.  Its strategic position by the river enabled the site to take advantage of the extensive trade routes between the Peten and the Gulf of Mexico. The site was first settled in the Late Pre-Classic (300 B.C.-250 A.D) and abandoned in the Terminal Classic (900-1100 A.D.) around 1000 A.D.

The site’s original name has yet to be fully deciphered from the recovered inscriptions. Its current name was bestowed upon it by Teobert Maler, possibly in reference to a nearby hacienda. The zone includes numerous structures and mounds assembled into five groups. It is spread out over 215 acres/87 hectares, and oriented to the main points of the compass. Some of the structures exhibit characteristics of the Peten style, such as recessed/inset corners. A number of the mounds are situated on private property. Fifteen stelae and twenty-two altars have been recovered so far.

Moral-Reforma can be reached from either Villahermosa or Campeche. From Villahermosa take Highway 186 north about 95 miles/152 kms to a turnoff east to Balancan (good signage). From the turnoff continue about 34 miles/55 kms (beyond Balancan) to a turnoff south to La Chuchilla/Reforma. 7 miles/11 kms south of La Chuchilla a turn off to the west leads to the site, about 2 miles/3.5 kms.

From Campeche, take the Highway 180 south to Champoton, about 35 miles/57 kms. From there take Highway 261 south to Escarcega which is around 52 miles/83 kms. Once in town, take the Highway 186 west, then south to the Balancan turnoff, about 90 miles/145 kms. See above for the final segments.

HISTORY AND EXPLORATION
Ceramic finds indicate the site was settled by 300 B.C. The majority of the structures seen today date from its heyday, 600-800 A.D. Five stelae have been recovered from the site. Enough information has been obtained to relate a bit of the dynastic history of Moral-Reforma.

The site is located in the Usumacinta River Basin that was in the middle of a power struggle between the two great competing kingdoms of Palenque and Calakmul, and involving numerous subsidiary sites. It is a tale of shifting alliances and warfare.

In 659 A.D. inscriptions at nearby Santa Elena record an attack and subjugation of that site by K’inich Janaab Pakal, Pakal the Great, of Palenque. Lords from the site of Pomona, along with other lords of smaller settlements were captured during the campaign. It is likely that Moral-Reforma also came under the dominance of Palenque at this time. In 662 A.D. fortunes changed, with Santa Elena and Pomona being subsequently defeated by Piedras Negras, an ally of Calakmul.

Stela 4 at Moral-Reforma describes the birth of Muwaan Jol in 656 A.D. He acceded to the throne just five years later on May 7, 661 A.D. (9.11.8.12.9), most likely under a regent, and possibly under the influence of Palenque. Interestingly, there was a second accession ceremony that took place in 662 A.D. after the intervention of Piedras Negras in the region. This event was overseen by Yuknoom Chen II, the Great, of Calakmul. It can be surmised that the previous regent was replaced with a loyal Calakmul ally. But the story and intrigue doesn’t end here.

On July 4, 690 A.D. (9.12.18.4.19) yet another accession ceremony of Muwaan Jol takes place. This time under the auspices of Kan B’ahlam II of Palenque which would indicate another change of over-lordship and subjugation. It seems that Muwaan Jol was required to make the journey to Palenque to present his submission. So, back and forth it went for this beleaguered ruler. At least he kept his head!

Stela 1 is dated to 750 A.D. and does not indicate any intervention by either Palenque or Calakmul. It relates details concerning a subordinate ruler and prisoners, and a king of Moral-Reforma. By this time the entire Maya area was beginning to fragment and dissolve amidst continuous warfare.

Moral-Reforma appears to have survived the initial Late Classic collapse that affected other decimated sites in the region. Archaeological evidence points to its abandonment around 1000 A.D.

The first mention of Moral-Reforma is made by the renowned explorer Teobert Maler in 1907 who reported on the inscriptions he found there. Wyllys Andrews was next to report on the site in 1937. There followed Raul Pavon in 1945; Cesar Lizardi Ramos 1959-61; and Lorenzo Ochoa Salas 1975. From 1992-2012 INAH has led investigations, consolidation, and restoration of the site which opened to the public in 2009.

STRUCTURES
Moral-Reforma has been divided into five groups, I-V. Groups III and IV, which each consist of unexcavated mounds, are separated from the main site by a modern road and are located on private property. Groups I and II have received the most excavation and restoration work. They face each other across a large plaza, the Grand Plaza, which measures about 240 feet/ 74 meters north to south, with the east/west dimension unclear.

Group I is located on the south side of the Grand Plaza, also known as Plaza Oriente, and contains 6 structures set loosely around two small plazas. Structure 1 is a 7-tiered platform. It has a broad, north facing stairway divided by balustrades into three separate stairs. It has inset corners, and displays the remains of several chambers upon the summit. Attached to this structure is Structure 2. Both of these structures are on the south side of a small plaza.

Structure 2 has been recently excavated and restored. It is a very impressive pyramidal structure having an uncommon design. Two stairways that lead to the summit face to the north, with the west stairway being inset from the east stairway. The east side shows a stairway that leads up two levels to a series of ruined chambers. Attached to this side of the pyramid, and behind it, is a small, low acropolis type complex with numerous remains of chambers, and stairways. Strangely, a fence denoting private property ruins across the top of a portion of this small complex.

To the southwest, and adjoining the small acropolis, are two mounds. These are large, square palace type complexes with sunken interior courtyards. The largest measures about 185 feet/56 meters x 192 feet/59 meters. They are both located on private property. An aerial view shows what could be two or more of these complexes immediately to the west.

Structure 3 is set on the east side of the small plaza in front of Structures 1 & 2. This is a small, 4-tiered platform showing no masonry constructions on its upper surface. The structure has stairways on all four sides, and exhibits inset corners.

At a distance of about 275 feet/ 84 meters west from Group I is Group V. This group contains several unexcavated mounds, and is on private property.

Structure 14 is a very unusual complex composed of three main structures set upon an enormous platform base. The platform measures 163 feet/50 meters x 228 feet/70 meters. In front of the platform at plaza level are five altars, and the remains of two stelae. A broad stairway runs most of its length facing south onto the small plaza. These steps lead up to a terrace that contains three small structures. The west structure is a small rectangular platform with some masonry remains. Next to this platform is the foundation of a smaller, square structure. An interesting structure of semi-circular design is located on the east side of the terrace. In front of this structure are two stelae and an altar. Set at the back of the terrace are the three main structures.

Structure 14A is a pyramid on the west side of the terrace that reaches a height of 77 feet/23.5 meters, and is the highest structure at the site, and of any of the Maya sites in the state of Tabasco. It has a single, rather narrow stairway flanked by balustrades that leads directly to its summit. The summit appears to be a rather small, flat area with little or no masonry structure evident.

Next to the pyramid is Structure 14B. This structure is also of a pyramidal design with numerous stepped tiers, and reaches a height of 65 feet/20 meters. It has wide stairway that reaches half-way up the structure. From there a narrow stairway flanked by balustrades continues upward and terminates onto a small, square terrace. At the back of the terrace is a two-tiered platform with a single west facing stairway that leads up to a tiny, flat space.

The third structure is situated on the east side of the terrace. This structure is the smallest of the three, and is composed of a raised platform accessed by a broad stairway. The remains of masonry structures are found upon the platform.

The small plaza in front of Structure 14 is surrounded by three mounds. One on the northwest corner is of a small, pyramidal shape. The southwest and south mounds are range type structures. The east side has a small rubble pile. On the south side there also appears to be the rubble remains of two additional small rectangular structures set on a north/south axis that could be interpreted as a ballcourt.

Behind Structure 14 is another small plaza. The northside has the rubble remains of two, small range type structures. The northwest corner has a rubble pile. The east side has what appears to be a rather large, elongated mound.

On what might be considered the extreme east side of the Grand Plaza are the mounds of Groups III and IV. An aerial view of this area shows what could be a massive platform with an interior sunken plaza. This platform appears to measure about 326 feet/100 meters square. More information on this platform needs to be acquired to verify this possibility. 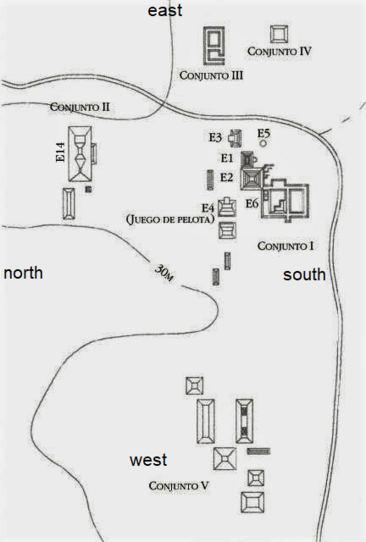 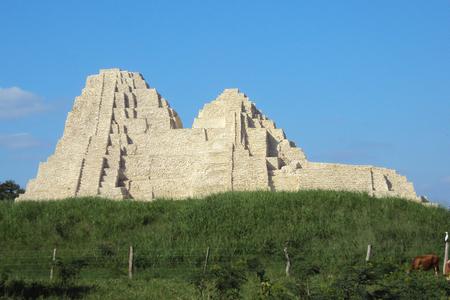 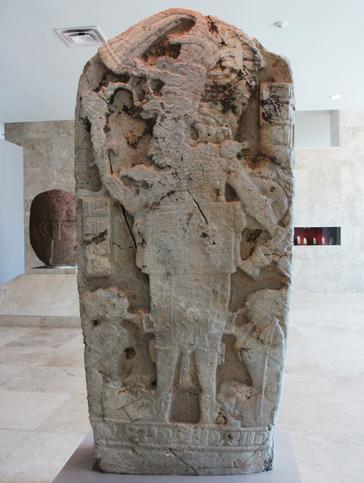