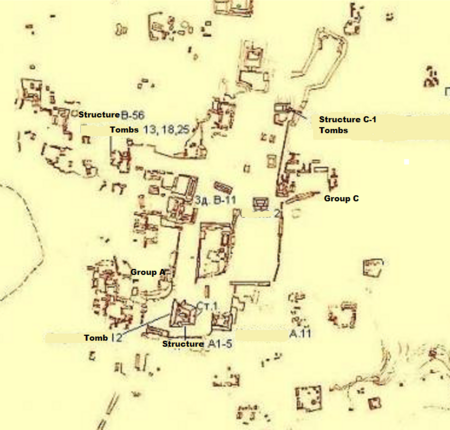 ​RIO AZUL-Peten, Guatemala
​DESCRIPTION
Rio Azul, Blue River in Spanish, is an Early Classic (250-600 A.D.) archaeological zone, located in a remote corner of Guatemala near the borders of Belize and Mexico. It is set in a dense tropical rainforest within the Rio Azul National Park, a part of the Maya Biosphere Reserve, 37 miles/60kms northeast of the major site of Tikal. The original name for the site has now been deciphered as Sak Ha Witznal/White Water Cave

Rio Azul is widely known for its elaborately painted tombs. The information obtained from these tombs has provided researchers a unique insight into the Maya of the 5th century. Unfortunately, these tombs are closed to visitors. There is scant glyphic information regarding the rulers of Rio Azul. Only one ruler, Six Sky has been identified from a glyphic passage found in his tomb, and dated to the 5th century.

There is a well-defined system of hydraulics, as the site was strategically located along a bend of the Rio Azul. Dams, channels, canals and other features have been identified.

Travel to the site is arduous, and is made via four-wheel drive vehicle during the dry season. It is recommended to visit the site through an organized tour. This multi-day tour can be readily arranged, and is usually a side trip combined with Uaxactun.

Flores is generally considered to be the jumping off point for sites in the Peten. It is an island city in Lake Peten Itza and is most easily accessed by air from Guatemala City. From there it is about 40 miles/64 km to Tikal, and then another 13 miles/20kms to Uaxactun. Buses are available from Guatemala City and Belize to Flores, and on to Uaxactun. Transportation/tours can be arranged from any of these locations.

HOURS: Hours are flexible, inquire ahead of time
ENTRANCE FEE: included in tour price
GUIDES: Guides are mandatory, and can be arranged through tour companies
SERVICES: None
ON-SITE MUSEUM: No
ACCOMMODATIONS: None, though camping is permitted.
MISC: Bring all supplies needed for your visit

HISTORY AND EXPLORATION
Rio Azul was first occupied during the Middle Pre-Classic (800-300 B.C.). Monumental architecture began to appear at the beginning of the Late Pre-Classic (300 B.C-250 A.D.), with the site experiencing its heyday during the Early Classic.

At the end of the 4th century A.D. the great city/state of Tikal conquered Rio Azul and installed a new ruler, possibly a son of Tikal’s king, Yax Nuun Ayiin I. Three circular altars dated to 385 A.D. allude to the takeover and sacrifice of the previous ruling elite. The site provided a strategic and important trade route to the Caribbean, and was part of the expansionist policies of Tikal; the creation of vassal and allied cities to face off against its arch rival Calakmul.

There is a strong influence of Teotihuacan found at the site. An inscription dated to 393 A.D. references the great warlord, Siyaj Kak, of Teotihuacan. Certain architectural designs such as the talud/tablero style have been documented here. There have also been a number of tombs discovered that contain ceramic styles associated with that great Central Mexican Kingdom, and appears to have been the final resting places of high-ranking individuals from there as well.

Tikal was defeated by Calakmul in 562 A.D. and Rio Azul may also have been conquered as the city fell into a steep decline at about this time. The site was resettled in the Late Classic (600-900 A.D.) only to face another devastating attack by northern Puuc forces around 840 A.D. The site then experienced the same collapse as was felt throughout the Lowlands, and by 880 A.D. was abandoned. The maximum population at the site has been estimated to have been between 3,500 and 5,000.

The first reports on the site were produced in 1962 by John Gatling, Richard Adams and Trinidad Pech. Ian Graham visited the site in 1981 after reports of extensive looting. He documented the carnage and hurried off to Guatemala City to request security staff to protect the site. Richard Adams returned and began an extensive and rewarding five-season archaeological project in 1983. There have been a number of excavation and restoration projects since.

STRUCTURES
There are nine major archaeological groups within Rio Azul along with numerous smaller groups, and agricultural and residential areas. The earliest settlement is located outside the current core area, and was again resettled during the latter part of the 9th century.

The main core of the site is centered along a north/south axis. This area consists of mostly Early Classic structures of a ceremonial/civic nature containing three main groups. There are over 40 plazas, 700 structures, a ball court, several stelae, altars, and more than 30 tombs so far discovered. Some of the walls of these tombs are elaborately decorated with glyphic texts, and have provided significant insight into the decipherment of Maya texts and of funerary practices from the Early Classic. Dedicatory caches have been recovered from throughout the site as well.

Group A is the main civic/ceremonial center, and is located at the southwest portion of the core area.  The main structure, AIII Complex, is a huge construction set upon a large, raised platform. It contains five temple structures. Structure AIII is a nine-tiered pyramid that houses an elaborate temple at its summit. Including its roof comb this structure rises to a height of 49 feet/15 meters, the highest structure at the site. Masks flank a central stairway. Temples I, II, IV and V are set upon a three-tiered, elongated pyramid base that is incorporated into the base of Structure III. A Rio Azul emblem glyph was discovered on the roof comb of Temple II. This complex has been heavily looted with tunnels and shafts penetrating all the temples, some of them 60 feet/18.5 meters deep into the structure.

Tomb 12 is located beneath Temple AII, and was emptied of its precious contents by looters. What is significant about this tomb is the wall paintings consisting of red paint over a white stucco surface. This tomb is the first to have been discovered that shows the cardinal direction glyphs in their relevant positions. Also, glyphs relating to the Sun (east); Ix Chel/moon (north); Akbal/darkness (west); and Venus (south) were positioned above them. Another group of glyphs refer to the ruler who is named Six Sky, and who was buried on 8 Ben 16 Kayab in either April 2 398; March 20 450; or March 8 502 A.D. The 450 date seems to be the preferred date. In the Mayan calendrical system, a Calendar Round date, in this instance 8 Ben (day) 16 Kayab (month) occurs only once every 52 years. This time frame was considered long enough to incorporate an average life span. See the FAMSI website under “Recommended Websites” for more info on the Maya calendar.

In front of this structure and located at the base of the Temple III stairway is Stela 1. It contains glyphic information on its north and south sides with a date of 393 A.D., and stands about 15 feet/4.6 meters high.

Group C is located to the northwest of Group B. The most important structure here is the CI Temple Complex. This is a four-tiered pyramid set upon a raised platform base. A central stairway leads up to a temple that at one time had an elaborate roof comb. The platform base also incorporates flanking one-tier temple structures on its north and south sides. Beneath these temples lavish tombs have been discovered, two of them untouched by looters.

Tomb 1, the most important at Group C, was unfortunately looted. The painted texts on the walls though, have yielded some information about the ruler who was buried there, referred to as Ruler X. It records his birthdate of September 29, 417 A.D. (8.19.1.14.6).

In 1984, during excavations of Structure C-1, Tomb 19 was discovered intact beneath the south temple. This tomb held the remains of an individual thought to have been from Teotihuacan. This has led to much discussion about how deep the actual influence was of that great city/state not only in Rio Azul but throughout the Maya area as well. Numerous tripod base cylinders and other ceramics were discovered that held residue which was removed for analysis, along with the remains of cotton fiber.

A beautiful ceramic pot with a twist-off lid was also discovered. The residue has been determined to be cacao, which the blue exterior glyphs clearly refer to. The pot has the only known screw top found so far in the Maya area. This is another example of heretofore unrecognized technical innovation that was being developed or incorporated by the Maya.

The 1985 field season led to the discovery of Tomb 23 beneath the north temple of Structure C-1. Again, this tomb was untouched by looters. An individual was interred who appears to have been from Teotihuacan, and with similar grave goods as found in Tomb 19 including carved bone and jade.

To the south of Group B is Group F. A stela, Stela 3, is set up in front of Structure F-1. Its’ style has been tentatively dated to the Early Classic as the glyphic inscription has been severely eroded.

Group BA-20 is located to the northeast of the site core. This is where the earliest construction dating from the Late Pre-Classic (300 B.C.-200 A.D.) has been discovered. The group consists of four platforms. Upon resettlement in the late 9th century, the residents built their simple abodes atop the existing platforms. 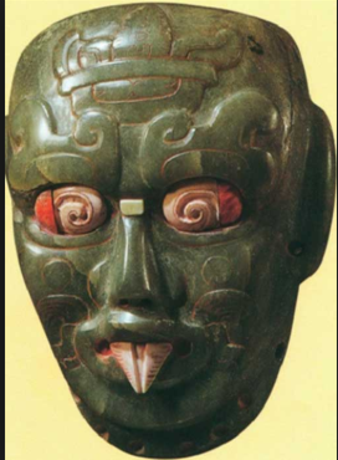 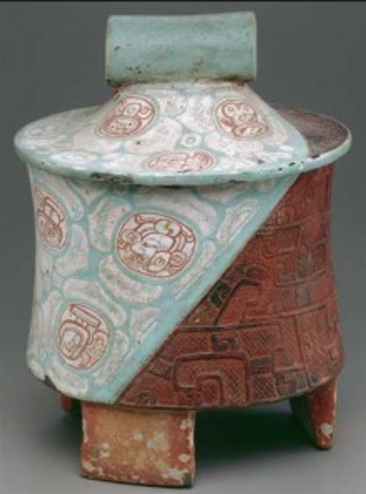 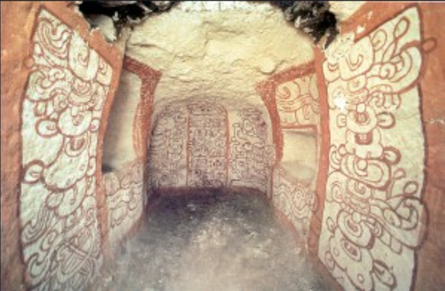 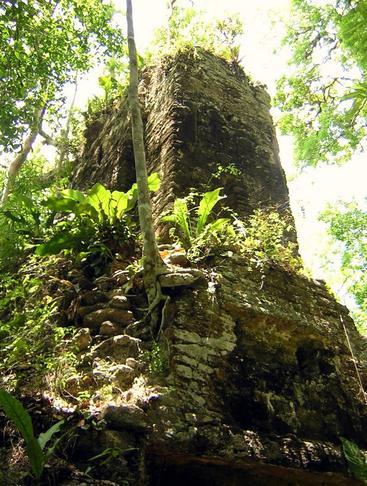 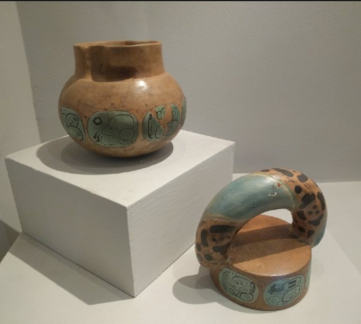