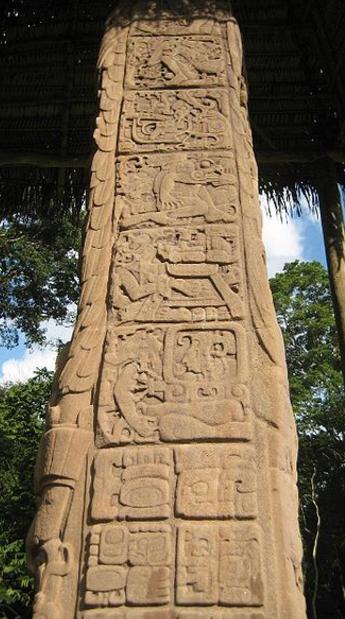 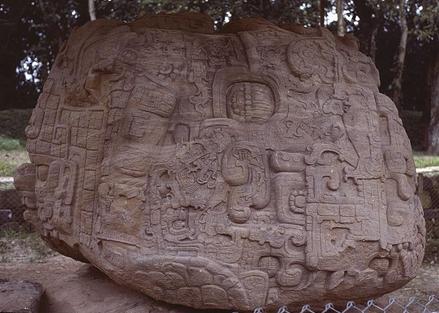 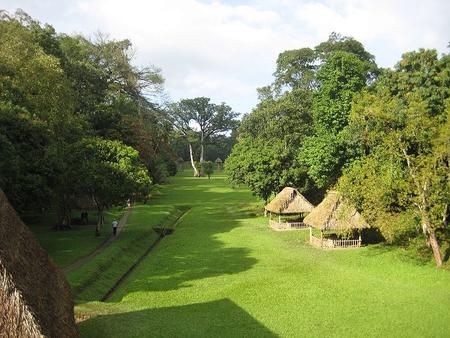 DESCRIPTION
Quirigua is a small, yet significant Maya archaeological zone originally located along the banks of the Montagau River, which forms part of the border between Guatemala and Honduras. The structures are very modest in design and size. It was declared a UNESCO World Heritage Site in 1981.

Quirigua is renowned for having the tallest carved monumental sculptures, and the most elaborately carved altars, in the Maya World. Monument 5, which depicts ruler Kak’ Tiliw Chan Yopaat is a stunning 35 feet/11 meters in height with a weight of some 65 tons. The Great Turtle Altar, Monument 16 ( Zoomorph P) is considered by many to be among the great masterpieces of Maya art.

The site and surrounding area was purchased by the United Fruit Company in 1909/10, with the company setting aside 30 acres as an archaeological zone. It is now owned by the Guatemala Government.

The underlying bedrock is made up of red sandstone as opposed to limestone that was the material of choice in most of the Maya area. Both of these materials are easier to carve when first exposed to the air and elements, and hardens over time.

The population, during its heyday in the Late Classic (600-800 A.D.), never exceed 1,600-2,000. The Maya were the ruling elite, but were considered to be in a minority as the site lies at the fringes of the known Maya area.

Quirigua is a four hour drive northeast on Highway 9 from Guatemala City, about 120 miles/200 kms. A good alternative is a two hour drive from Copan in Honduras if one is also visiting that site.

HISTORY AND EXPLORATION
Quirigua was settled by the Late Pre Classic (500B.C.-250 A.D.). In the Early Classic Period (250-400 A.D.), Copan, about 30 miles/48 kms to the southeast, established a subservient dynasty to control the jade and obsidian trade along the river. The great city state of Tikal, which had a hereditary alliance with Copan, has been named as the impetus for the site’s development as part of its strategy to counter the expansion of its arch enemy, Calakmul.

The first Ruler, Tok Casper was installed to the throne in 426 A.D., by Kin’ich Yax Kuk Mo, the founder and king of Copan, who had a direct association with Tikal. There is a uneven record of successive rulers, with an absence of textual monuments from most of the 6th and 7th centuries.

Beginning in the mid 7th century Quirigua’s fortunes increased, and in 656 A.D. the first new monuments were erected along with other monumental architecture, including a ball court. At this time Quirigua was still a vassal state to Copan.

With the probable collusion and instigation of Calakmul, the ruler of Quirigua, Kak’ Tiliw Chan Yopaat, captured the great king of Copan, Waxakajwn Ubaak Kawiil (18 Rabbit), and sacrificed him in the Great Plaza (738 A.D.). Quirigua attained its independence, and Copan never fully recovered from this deceit.

Quirigua’s last dated carved monument was completed in 810 A.D., and its last ruler was Jade Sky (c.800-810 A.D.). After this the site experienced a sharp decline and was abandoned a short time thereafter. There was a later occupation around 900 A.D. that was short lived, and which may have been the result of a trade relationship with Chichen Itza in Yucatan, Mexico.

Those intrepid explorers, John Lloyd Stevens and Frederick Catherwood, were the first to record and document the site in 1840. Their books make for a fascinating read. They were followed by Alfred Maudslay in the 1880’s/90’s who documented the site through his excellent photographic methods. Sylvanus Morley started systematic excavations in the early 1900’s. Excavation and consolidation continued throughout the 1970’s by the University of Pennsylvania, The National Geographic Society and the Guatemalian government, directed by Robert Sharer and William Coe.

STRUCTURES
Many of the structures at Quirigua are unexcavated mounds. The earliest structures were completed during the Early Classic Period (200-400 A.D.). These are found about 2 miles/3.5 kms from the current central core area located on a small hill, and known as Group A.  This was a small ceremonial complex wherein the earliest stela (Stela U) was found and dated to 480 A.D., and which represents a ritual scene attended by a king of Copan.

Activity eventually settled in the current core area in the Late Classic (600-900 A.D), and this is where most of the excavation and consolidation has occurred.

The Great Plaza stands at the heart of the civic/ceremonial city. This is perhaps the largest plaza in the Maya World measuring 981 feet/300m x 654 feet/200 m. It was here that Quirigua’s greatest ruler, Kak’ Tiliw Chan Yopaat, built and defined Quirigua as it was known in its heyday, and as it mainly exists today.

Anchoring the north end of the Great Plaza is a large platform structure known as Structure 1A.  In front of this structure is a series of stelae, and carved boulders of mythological creatures known as zoomorphs.

Looking south across the Great Plaza can be seen the largest monuments ever erected in the Maya World and which were commissioned by Kak’ Tiliw Chan Yopaat. These magnificently carved sandstone monuments vary in height from 16 feet/5m to a stunning 35 feet/11 meters.

Fronting the east side of the Great Plaza is a line of mostly unexcavated structures. The west side was open to the river.

At the south end of the Great Plaza is the Ball Court Plaza which backs onto the Acropolis. The ball court has an unusual east-west orientation.

The Acropolis is the largest complex at Quirigua. There are numerous structures that were built and later expanded/buried during different construction phases. An early ball court was found beneath a western portion of the complex.

The magnificent Monument 16/Zoomorph P, and Altar P are located in the Great Plaza in front of the Acropolis. They were dedicated by Ruler Sky Xul c.795 A.D. They contain long texts relating to the first rulers of Quirigua along with intricately carved mythological scenes.

On the western side of the Acropolis runs a long wall known as The Kin’ich Ahau Wall. On the exterior side of the wall that faces the river were five Sun God and serpent masks.

Structure 1B-1 is located on the south side of the Acropolis. It is a three chambered structure with glyphs located within each chamber. These have been dated to the reign of Jade Sky, the last recorded ruler of Quirigua (800-810 A.D), and date to 810 A.D.

There are smaller groups of structures that are found within and without the core center such as The South Group, The East group, Group B, and Group C. ​ 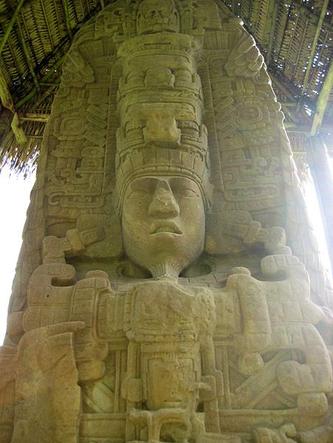 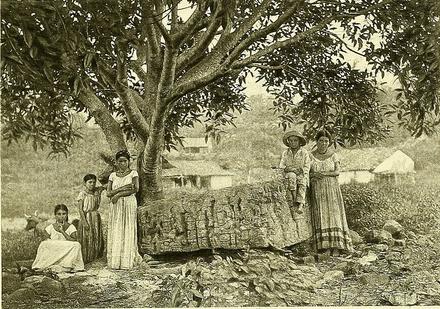 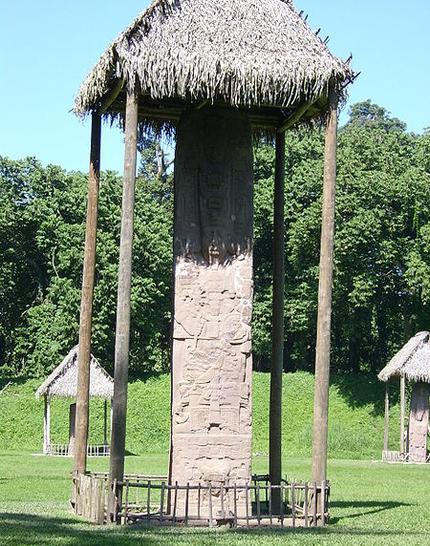 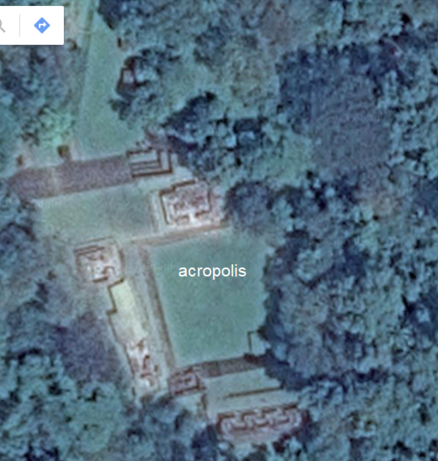 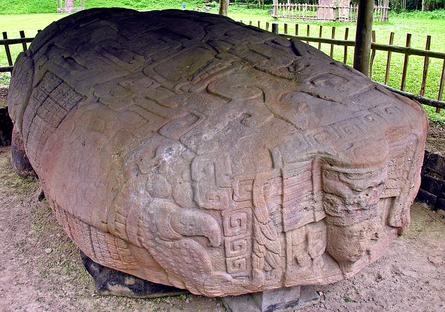 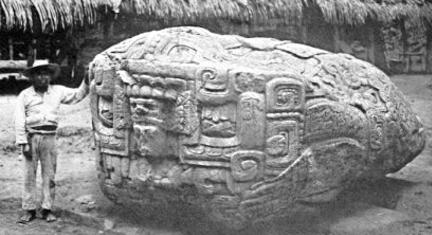 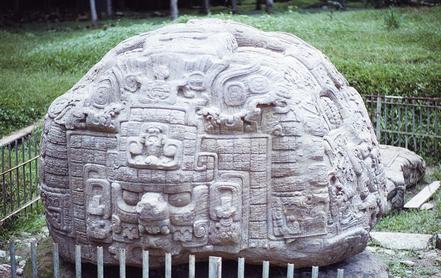 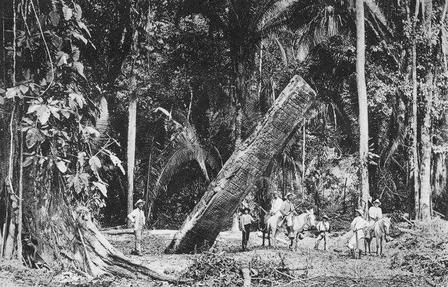 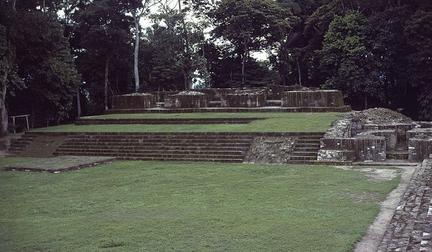 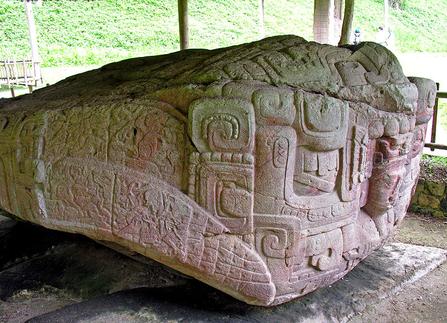 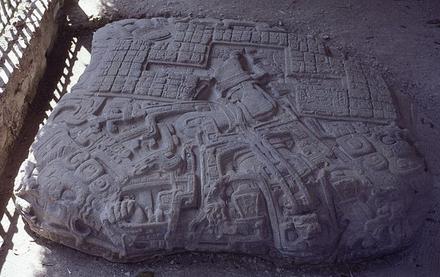 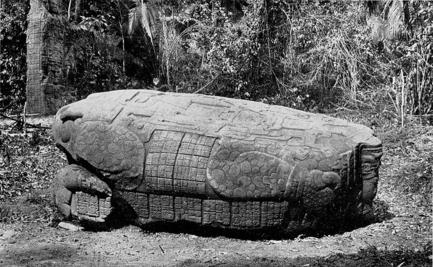