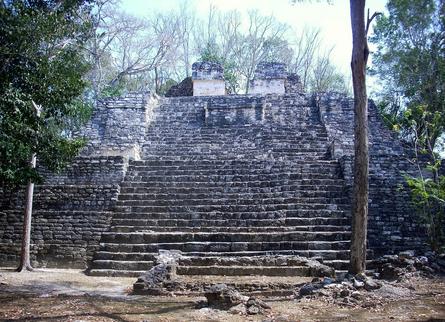 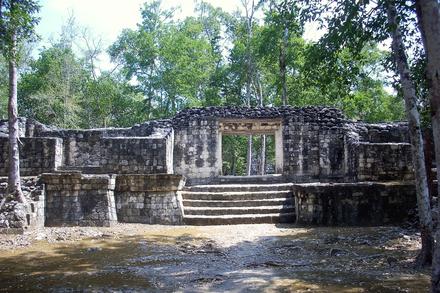 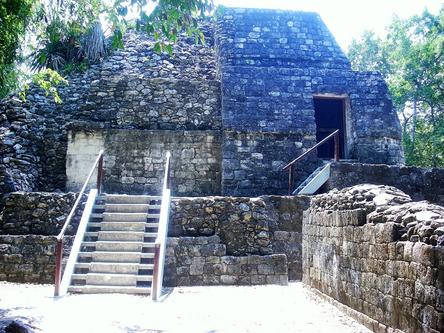 DESCRIPTION
Balamku (Divine Jaguar/Temple of the Jaguar) is an Early Classic (200-600 A.D.) archaeological zone named after stucco images of a jaguar discovered there. These images are part of a rare, well preserved stucco frieze which has generated intense interest among both researchers and visitors.

There are three main monumental groups that make up the site. It is located in the general Rio Bec archaeological area in the southern Yucatan Peninsula, the most famous of which is the grand site of Calakmul.

The site is located along the Chetumal-Escarcega road, Highway 186, at KM93. From Chetumal it is past the turnoff to Calakmul at the small settlement of Conhuas, on the north side of the road.

HISTORY AND EXPLORATION
Balamku has a settlement history that dates back to the Late Pre-Classic (300 B.C.-200 A.D.). The stelae that have been uncovered here are too deteriorated to provide any information on the sites’ dynastic history. The architecture of the site shows early influence from the Peten in northern Guatemala, and later of the Rio Bec style.

Most of the monumental construction took place between the Late Pre-Classic and the Early Classic (200-600 A.D.).  There are examples of later construction activity in the Late Classic (600-900 A.D.). The site most likely experienced the same decline as the other sites of the Rio Bec area, and was abandoned during the Terminal Classic (900-1100 A.D.).

The site was first investigated in 1990 by archaeologist Florentino Garcia Cruz following reports of looting in the area. In 1995 French archaeologists Dominique Michelet and Pierre Becquelin joined INAH archaeologist Ramon Carrasco in excavations and consolidations. Further work at the site was carried out between 1996-98.

STRUCTURES
There are three groups of structures that constitute the main core area of the site. Several have been restored while others await their release from the stranglehold of time. The site is set on a North/South axis a few degrees east of north.

The South Group is the first group encountered when entering the site. It contains four plazas that are set on a raised, leveled surface. It is dominated by a nicely restored, multi-tiered pyramidal structure, Structure D5-5, that borders both Plazas A and B. Both of these plazas reveal initial constructions that date to the Late Pre-Classic, and in the Peten style.

Structure D5-5, has its main orientation south on to Plaza A. This structure reaches a height of about 54 feet/15 meters. A broad stairway rises up to a terrace where it is interrupted by a central podium. The divided stairway then continues up to a summit terrace. A double chambered temple is set at the rear of the terrace which still retains portions of a corbeled roof and the remains of a monster mask which could indicate Chenes influence. Two small platforms with raised edges are located in front of the plaza stairway along with the remains of a possible stela that is intertwined within the roots of a fallen Ficus tree. The structure suffered severe damage from looters trenches and hurricanes during the 1990’s.

The south side of Plaza A reveals a rectangular mound identified as Structure D5-11. Other smaller structures have been identified to the south at a lower level, and on the west side of the plaza.

The east side of the plaza is taken up by Structure D5-10. It is set on a raised platform about 11 feet/3.5 meters in height. It contains a single chambered structure containing a bench and has been determined to be an elite residence. At one time it had a masonry vaulted ceiling. A terrace in front of the chamber contains four pillars that one supported a roof of perishable materials. The chamber is accessed by a north facing stairway that opens onto Plaza B. There are two deteriorated stelae that are positioned in front of the structure at the plaza level.

Plaza B has structure D5-10 on the south, the east side of Structure D5-5 on the west, and a small rectangular structure on the north side.

Plazas C and D are of a residential nature with Structure D5-4 being the most notable. It is a platform about 11 feet/3.5 meters in height, and nearly 98 feet/30 meters in length. It has the remains of a series of multiple, linear chambers. Nicely worked masks decorate the exterior. A pathway leads to the Central Group.

The Central Group is composed of three plazas that comprise about 30 structures.  Plaza A forms the south side of the group and contains a ball court and other unexcavated mounds. To the north of this plaza is Plaza B.

Plaza B contains several structures and is entered through Structure IVb which faces both plazas and serves as a type of controlled entry portal. It is part of a series of structures set upon a low, C-shaped platform base. At the east end of the platform base is a small, restored pyramidal platform having a temple structure on its summit.

Structure 1 is of the most importance, and is located in the north-west section of the Plaza. The structure is a multi-tiered pyramid with a broad central stairway that leads to a summit containing a multi-chambered temple. The pyramid is one of three separate pyramids that have been joined together over the course of numerous construction phases and extends along the entire north side of the plaza.

Structure 1 is where the stunning discovery was made of an enormous frieze that decorates one of its sides. The frieze measures 54 feet/16.6 meters in length with a total height of 17 feet/5.3 meters, and had been partially uncovered by a looters trench. The well-preserved frieze depicts an elaborate scene of gods, jaguars, amphibians, reptiles, and rulers. This iconography has led some researchers to identify it with similar themes found at Palenque, and which are related to certain dynastic rituals. It has retained some of its vivid colors. The frieze is accessed off a stairway at about the half way point, and is part of an earlier sub-structure.

This is not the first time a looters trench has led to a major discovery. The fabulous wall murals at San Bartolo were also recently discovered by archaeologists in this manner.

The west side of Plaza B houses Structure IV. This structure has a platform base with a wide stairway that leads to an unexcavated summit. The east side of the plaza exhibits a large, unexcavated mound.

The Central Plaza is to the east of Plaza B and contains several unexcavated structures. The largest is a pyramidal structure on the north side of the plaza.

The North group awaits excavation by archaeologists. It contains six plazas and numerous mounds. There are other smaller platforms and structures throughout the site, mostly mound covered. 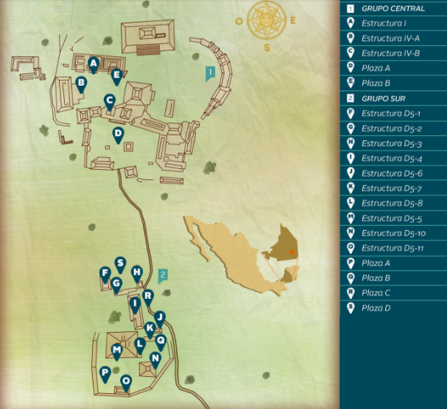 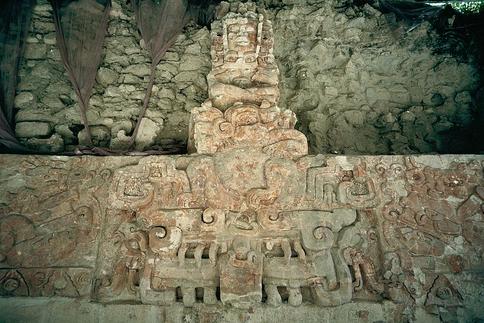 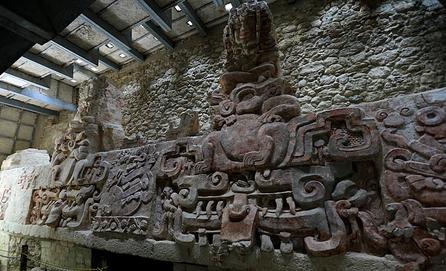 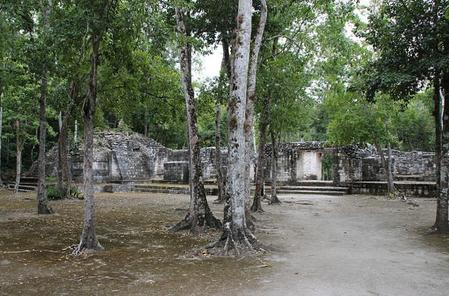 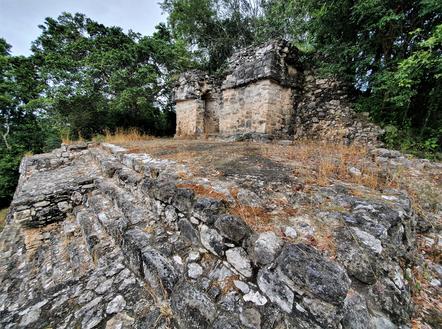 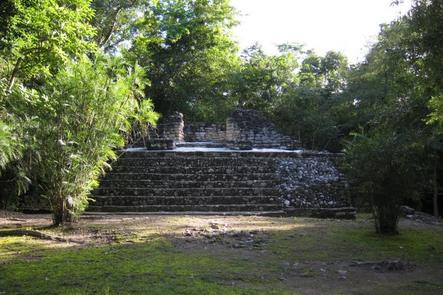 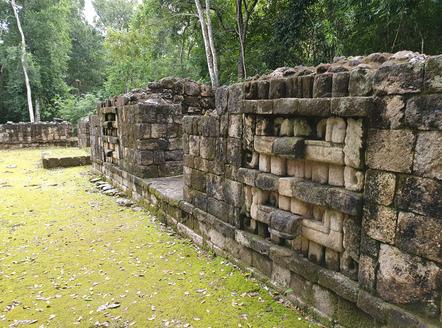 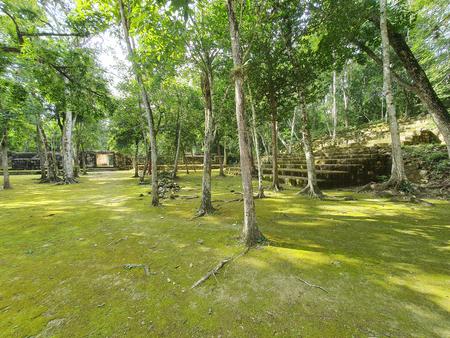 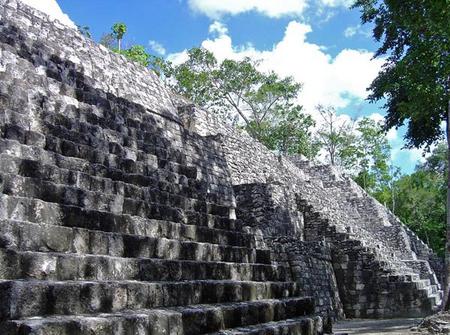 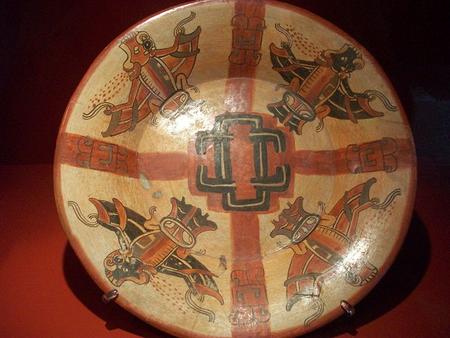 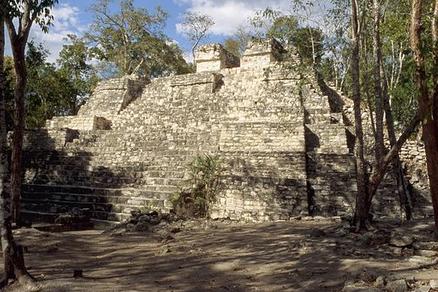 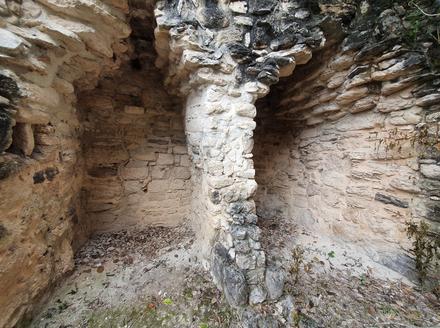 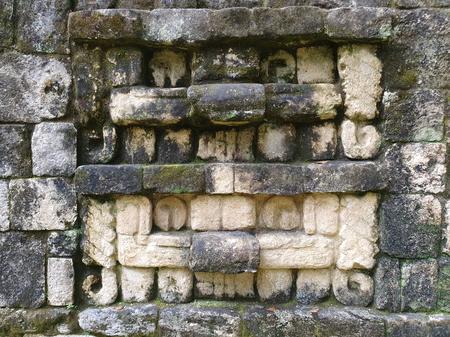 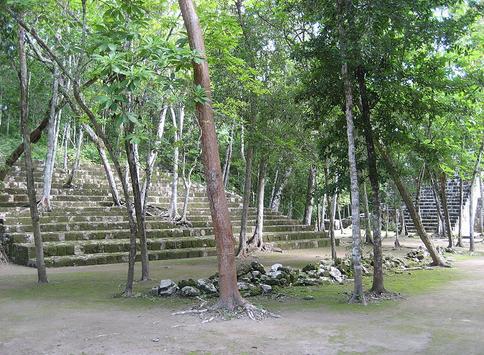 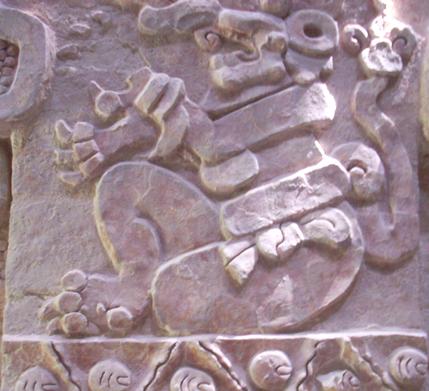