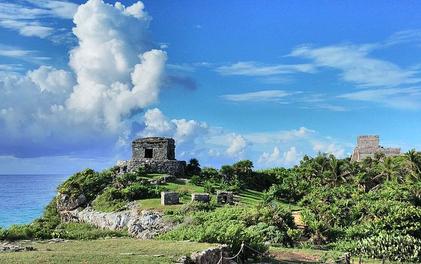 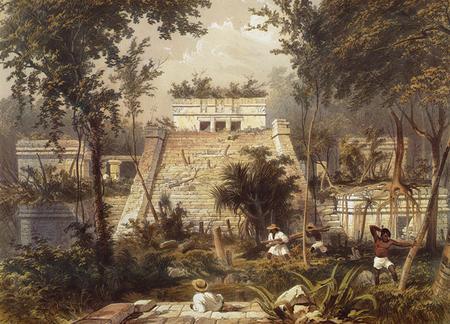 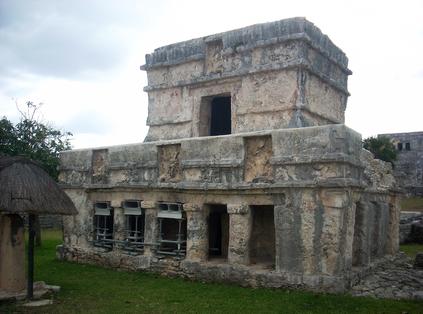 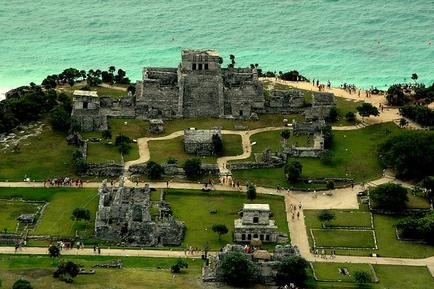 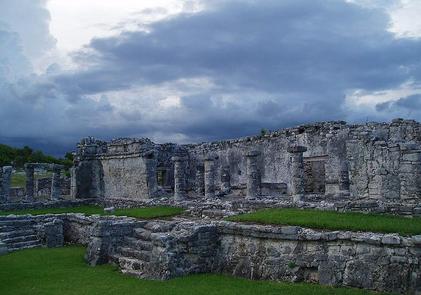 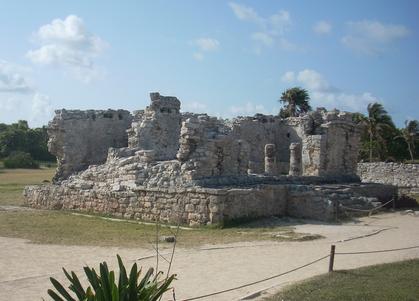 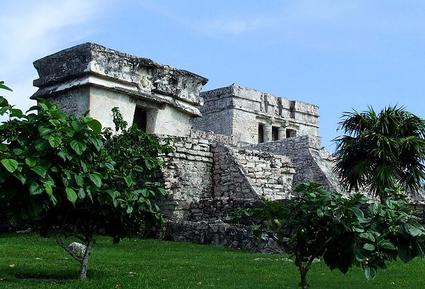 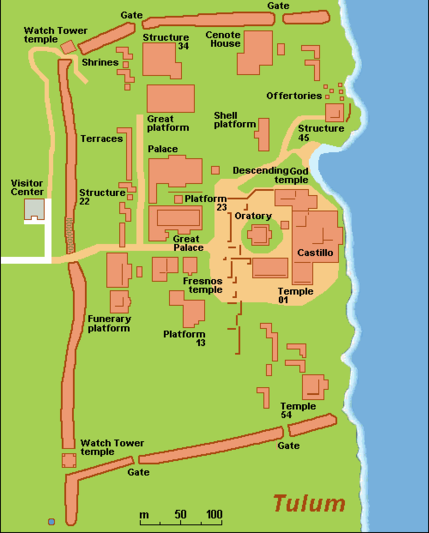 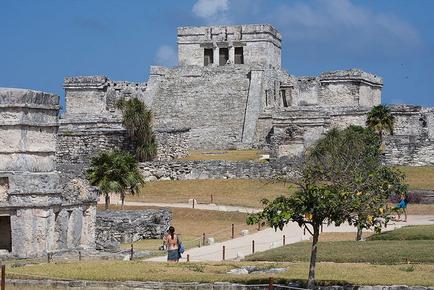 ​Tulum is a medium, well preserved, walled Post Classic (1200-1450 A.D.) archaeological zone bounded on the east side by the beautiful blue Caribbean. The original name for the site has been interpreted as Zama; Dawn in Yucatec Maya. It is noted for its well preserved murals and images of the Diving God. It features a type of architecture known as East Coast Style, with similarities to Chichen Itza and Mayapan.

Tulum is located on a high cliff which affords it a spectacular command of the surrounding land and sea. On the east side of the Castillo is a sharp drop off to the sea with a very nice white sand beach used in ancient times to land large ocean going trade canoes. Today it’s a great place to take a refreshing swim.

Tulum is about 2 miles east of the town of the same name which is located on the main coastal road, Highway 307, south from Cancun. Arrive early as the site tends to get crowded as the day goes on.

HISTORY AND EXPLORATION
Contemporary excavations have dated the majority of structures at Tulum to the Post Classic (1200-1450 A.D.) era, though a stela (carved stone slab monument) and perhaps one other structure date to the Classic Period (300-900 A.D.) indicating a probable earlier occupation. It is thought to have been the main trade seaport for the politically more powerful city of Coba to the northwest. Tulum’s importance as a major seaport can be attested to by the large number of trade artifacts recovered here that originated from throughout the Yucatan and as far away as Guatemala to the south, and the central Mexican valley to the north.

Unlike most Maya cities, Tulum was occupied until a time shortly after the Spanish Conquest. It remained a pilgrimage site, and during the Caste War (1847-1855) became a refuge for “The Talking Cross” of the Maya warrior clans.

Tulum was sighted in 1517 during the first Spanish exploration of the Yucatan Peninsula. The Spaniards were awed by the grandeur of the Castillo, and frightened off by the large display of warriors. The first widely reported exploration of the site was by the dynamic duo of John Lloyd Stephens and Frederick Catherwood in the 1840’s whose commentary and lithographs brought it to the world’s attention.

There was little work done at Tulum after their visit as the Caste War prevented any further serious exploration until the beginning of the twentieth century. In 1916 Sylvanus Morley began a series of investigations on behalf of the Carnegie Institute. More recent investigations and consolidations have been carried on by INAH.

STRUCTURES
​The most important complex is known as the Interior Precinct, and is enclosed within the site by a small wall with one archway still standing on its southern side. It encompasses several structures.

The largest and most impressive structure at Tulum is located here and is that of the Castillo. It rises three levels on the highest point of land facing west with its back to the sea. The second level has twin chambers with columned entryways that abut each side of the grand stairway. The whole structure is crowned with a two room temple and reaches a height of about 25 feet/8 meters. The façade contains an image of the “Diving God” which is found as well on other structures at the site. The “Diving God” also appears at Coba, and some other sites, and may be related to the planet Venus, the setting Sun and/or the Bee God. The corners of the temple once had stucco masks, and like most of the structures at the site was brightly painted. There is a wide balustrade stairway that descends to the main plaza, and is flanked by two smaller temples.

The Temple of the Diving God makes up the northern side of the complex. It is a rather square, one room temple structure that sits atop a high platform with a small terrace in front. It also faces west and is accessed via a single stairway. Above the entryway to the temple is a stucco figure of the Diving God.

The south-east part of this complex is made up of the Temple of the Initial Series. Its entryway faces to the north. The left side of the entryway has a stucco figure in relief, with the remains of a sculptured figure above. Within this temple John Lloyd Stephens recovered a stela which contains the oldest recorded date found at Tulum, 564 A.D. It has been suggested that this stela may have been relocated from another site such as Coba in antiquity. The stela is now in the British Museum.

In the center of the complex is a high platform once used for dance and other ritual. It has a single west facing stairway.

Just outside the Interior Precinct are a number of structures that run along a north-south axis. The most important structure here is the Temple of the Frescos. This is a two level structure that faces east/west. The first level consists of one temple within the other. The inner temple walls are decorated with painted murals and its outer walls have stucco figures in relief. The murals show central Mexican influence, very similar in style to the now destroyed murals at Santa Rita, Belize. There are three galleys that adjoin the outer temple room and are thought to have been a later addition. There is a representation of the “Diving God” found on the west facing central niche. A small one room temple sits atop with a single west facing doorway. Inside red handprints adorn one of the walls, similar to those found at San Gervasio on Cozumel Island. Stela 2 is set up on the west side of the temple.

Just to the north is the House of the Columns. This structure is built upon a low platform with a raised “L” shaped courtyard, and is considered an elite residential compound. The structure has two long rooms and is entered from the south between a series of 4 columns at the edge of the courtyard. There are small adjoining rooms on the west side.

Continuing north leads to the Palace of the Halach Uinic, or Grand Palace. This structure is entered from the south across a well defined courtyard. It consists of two long rooms with the interior entryway crowned by a stucco figure of the Diving God.

The next structure of interest to the north is termed the North West House. It is a double roomed structure with its main entrance facing west. It is the first building encountered if one would enter from one of the two north entrances.

The other north entrance leads to the House of the Cenote. This structure is comprised of three rooms and is built over a natural cenote. It is located in the north-east corner of the site.

Returning towards the Castillo is the Temple of the Wind God. This structure is situated on a small promontory that juts out to the sea. It is a small one room structure with three miniature temples in front of it.

The last structure of note is the House of the Chultun, probably a residential structure. It faces east and lies directly across from the Temple of the Frescos. It is accessed via a single stairway across a small terrace whose entryway is defined by two columns. The spacious front room leads into three smaller rooms. The interior entryway again has a stucco figure of the Diving God over the door lintel.

There are numerous other smaller structures, many just foundation outlines, located within the surrounding walls. The walls themselves are quite thick and rise about 14 feet. There are two entrances on both the north and south walls, and one on the west wall. The west wall has small temples/watch towers located at either corner. Within each temple is a small altar. 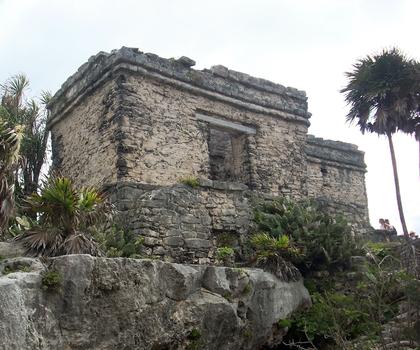 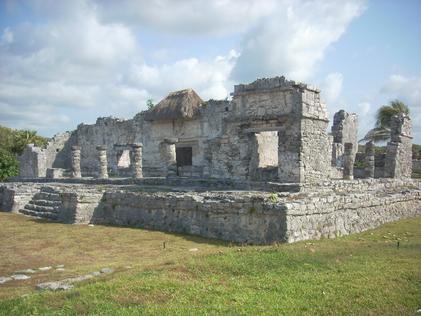 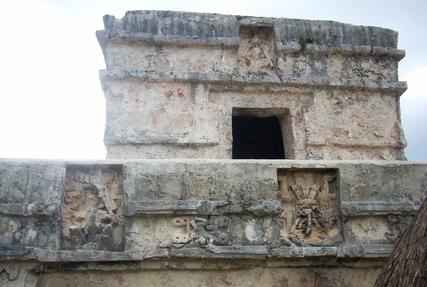 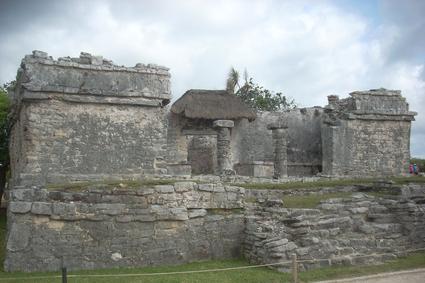