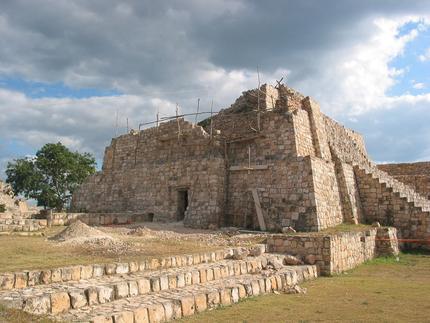 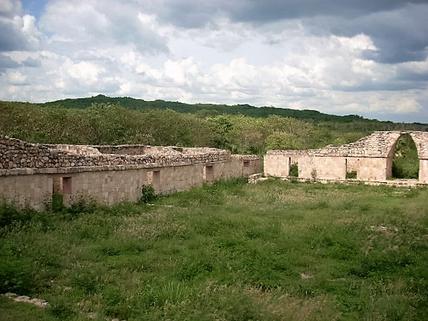 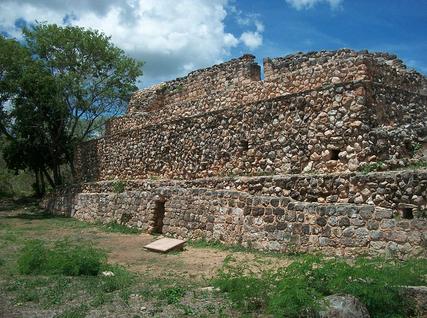 DESCRIPTION
Oxkintok, “Three Sun Stone/Three Flint Sun”, is a seldom visited site located in the western region of the Yucatan at the edge of the Puuc Hills. Most of the standing structures date from the Classic Period (200-900 A.D.).The site core consists of four main complexes. There are numerous pyramids, palaces, temples, courtyards, and at least two entry arches. Numerous tombs have been unearthed here containing beautiful funerary objects.

While the core center of Oxkintok is easily visited, the site itself encompasses a few square miles. There are mounds scattered all along the dirt road that runs to the site. It is a very rough road and might be a bit of a challenge during the rainy season.

It is reached off Highway 180 south of Merida near the town of Maxcanu. It can also be accessed from Calcehtok, where the well known caves are located. On the road from Maxcanu look for the rusted sign that reads “Actun Usil”. This is a small cave of special interest off the south side of the road and up a small hill. It has rare painted glyphic writing on the ceiling. Well worth a look. Bring flashlights.

HISTORY AND EXPLORATION
Early settlement patterns and ceramic shards have been identified that reach at least back to the Late Pre-Classic Period (100 B.C.-200 A.D.) and perhaps even earlier. The earliest carved date identified is from 475 A.D. The site spans different architectural styles indicating that is was continually enlarged over a long time frame. It reached its prominence during the Middle to Late Classic Period (650-900 A.D.).  The site was abandoned by the end of the Late Terminal Classic (1200-1450 A.D.).

The first thorough report on the site was done by those intrepid explorers John Lloyd Stevens and Frederick Catherwood in the 1840’s. Excavations and restoration continues today.

STRUCTURES
There are four main groups that make up the core area of the site. One enters the site from the north. Directly to the east is a very pleasing and well preserved entry arch. This leads to a small complex of low structures.

Following the path to the southeast is the best known structure called the Labyrinth or Tzat Tun Tzat. It is a bit isolated. This structure was reported in Stephens book, Incidents of Travel in Yucatan, where it was first thought to have been a cave as it was completely covered with earth and vegetation. It is an unremarkable, yet pleasant structure. Inside are a number of passages that weave a maze through different levels, and was most likely used for ritual purposes. It is unfortunately now closed to the public and used as a storage area. This single structure makes up the Satunsat Group.

There is a small structure located close by that has lovely decorative stone work in a pure Puuc style. It is reported that this is the oldest building at the site.

To the southeast the path leads to the main pyramid that faces onto the South Plaza. A temple structure crowns the summit. In front is a very nice sculpture that contains a Kin sign (Sun in Yucatek Maya). From the top of the pyramid one can get a great perspective of the site.

On the northwest side of the South Plaza is the Dzib Group, which contains several structures including the ball court.

To the east, adjacent to the pyramid, is a long multi-roomed palace built atop a raised platform. A large temple faces the east side of the plaza. Recent excavations unearthed a buried cache in front of this temple. This area is known as the Ah Canul Group.

Behind the plaza farther to the east is another complex built around a courtyard. The most eastern building has some very unusual sculpted statues standing in front of a columned palace. On the north side of the plaza is a palace structure with a chultun (cistern) located in front of it.

Passing through this complex leads to a large enclosed plaza with a well preserved arch in the east wall. There is a palace structure along the north side of the plaza.

To the south of the South Plaza is the May Group. This consists of a “C” shaped courtyard with a central pyramidal structure bracketed by low platforms containing smaller structures. There are numerous other structures throughout the site in various stages of preservation.

This is a site that is slowly opening up with ongoing excavation and restoration work. It is hoped that the recent addition of restrooms will help bring more attention and increased visitor traffic.​ 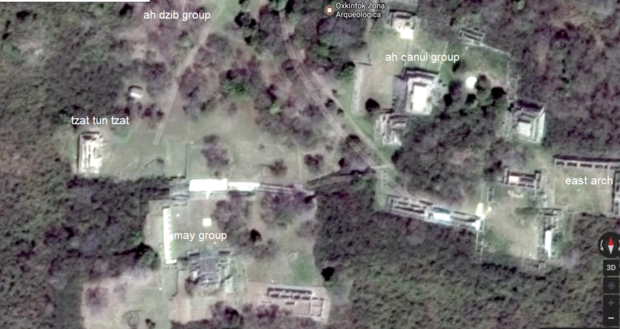 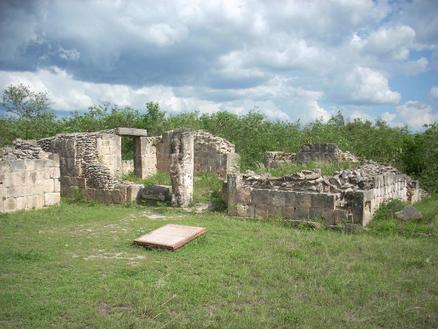 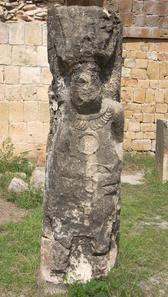 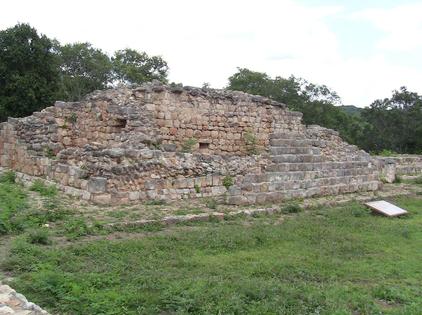 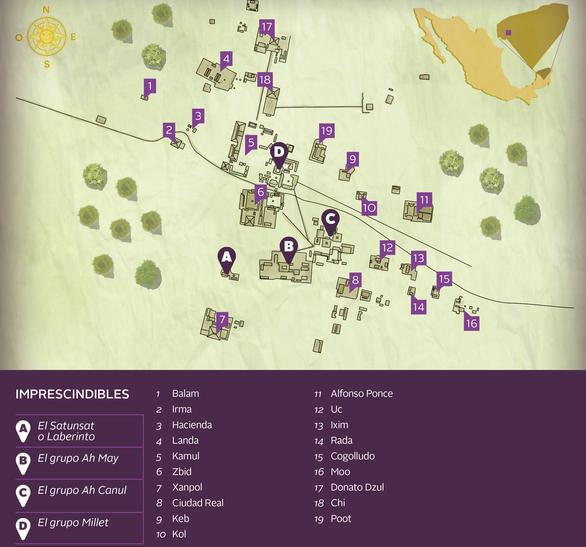 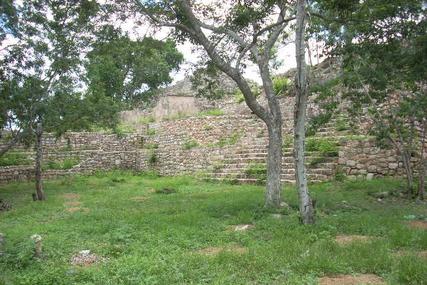 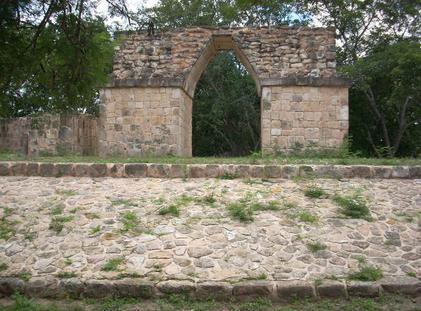 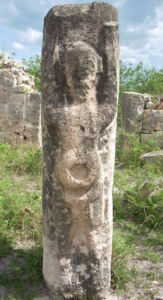 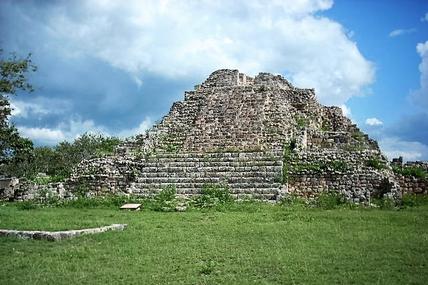