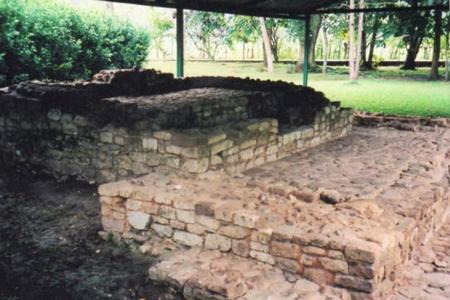 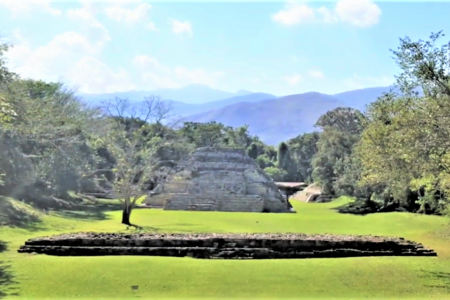 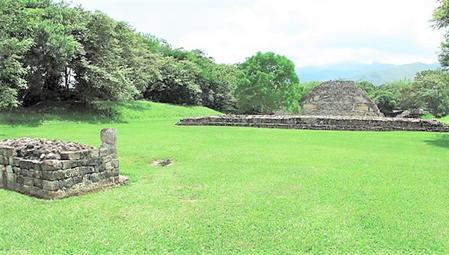 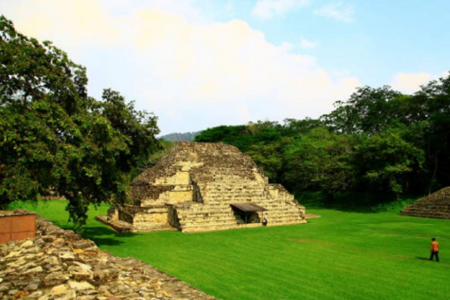 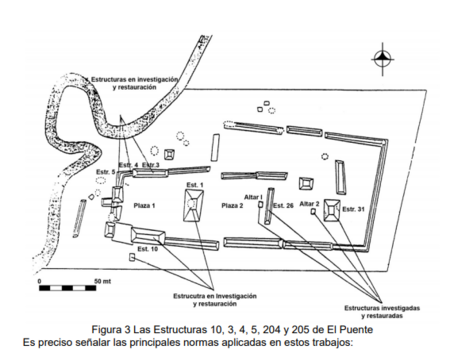 DESCRIPTION
El Puente, the Bridge, is a Mayan archaeological zone located in the northwestern part of the country. Its name is taken from the ranch on which the site was originally located, and references a stone bridge that crosses the nearby Chamelecon river. The original name is unknown. It is the second most important archaeological zone in Honduras after Copan, and was opened in 1994.

El Puente dates to the Early Classic Period (250-600 A.D.). It served as a satellite center of Copan controlling trade routes that meet at the confluence of two river systems that flow through the Florida Valley. It is the larger of several sites located within and about the valley such as El Abra and Las Tapias. The site is orientated on an East/West axis.

Looting and agricultural activities have had a serious affect on the site. Hurricane Eta in 2020 caused some damage as well, mainly flooding.

The archaeological park is located in the municipality of La Jigua, 7 miles/11.25 km north of the town of La Entrada, and 1.2 miles/2 km north of the convergence of the Chamelecón and Chinamito Rivers. The park encompasses an area of 13.5 acres/5.5 hectares.

El Puente has a very modern, multi-room museum. It features a fine selection of ceramics, stone monuments, and architectural elements from the site and surrounding area. Of special interest is a stela from El Abra, and some beautiful alabaster bowls and vases.

The site can be reached from the capitals of Guatemala, El Salvador and Honduras. The closest main city in Honduras is San Pedro Sula about 77 miles/123 km to the north. Take the CA4 out of San Pedro Sula, and pick up the CA11 at La Entrada. A few miles/km out of La Entrada take the RN127 north to the site. It is about 30 miles/49 km northeast of Copan as the toucan flies.

HISTORY AND EXPLORATION
El Puente has a fairly recent history that dates its beginnings to around 550-575 A.D. in the Early Classic. There have been no recovered stelae with glyphic inscriptions that could help identify its rulers or direct relationships to other sites. However, ceramic evidence and architectural styles exhibit a close tie to nearby Copan which is the largest Mayan site in Honduras. It is thought that the site was established by Copan to control the important trade routes that pass through the Florida Valley.

The site reached its peak in the Late Classic (600-900 A.D.), and was by now closely integrated with Copan. When Copan began its decline in the first half of the 9th century El Puente and surrounding sites were also affected. Sometime after 850 A.D. Copan was abandoned and it appears that El Puente may have received some of its inhabitants as the archaeological record indicates an increase in population there. The site was occupied into the 10th century and possibly beyond. New research may help to determine a more accurate date for abandonment.

El Puente was first reported on by Jens Yde of the Danish National Museum Expedition in 1935. He completed a site map and descriptions of the visible structures. His notes also indicated looting at the site. The next investigations were carried out by the Japan International Cooperation Agency and IHAH in 1984.  This was followed by the La Entrada Archaeological Project that began in 1991. The park opened to the public in 1994.

STRUCTURES
El Puente contains over 200 structures with the core civic/ceremonial area situated around 5 plazas. Nine structures have been excavated and restored. The architecture of the site exhibits a mix of Maya, Lenca and Central Honduras characteristics probably reflecting its frontier status. Early construction phases show a strong Copan influence, though the overall quality of the workmanship varies considerably and is not up to traditional Maya standards.

Plazas A-C run in a linear fashion on an east/west axis. The west side of the site borders on the Chinamito River with Plaza A being closest to the river. It is interesting to note that a stone retaining wall lines the bank of the river.

Plaza A is ringed by several structures. The main structure, Structure 1, is on the east side of the plaza. It is the tallest structure at the site with a height of about 39 feet/12 meters. It is a radial pyramid exhibiting six levels with stairways on all four sides. The east side of the pyramid has a broad stairway that reduces in width at the first terrace level. It then rises to the remains of a multi-chambered temple at its summit. This temple structure at one time had a corbeled roof. One of the temple walls had three recessed niches that contained human sculptures.

A number of burials and offerings have been found within Structure 1. One of the burials is now located within the on-site museum along with its offering of two ceramic vessels, a jade breastplate and other items. A very impressive censer was discovered that is also housed in the museum. It features a dignitary displaying a high turban, and a breastplate adorned with birds. Another burial has revealed an offering of green obsidian which has been determined to come from the Pachuca area in Central Mexico over 745 miles/1,200 km away, indicating the strong trade network that once existed.

The main structure on the south side of the plaza is Structure 10. This structure is a rectangular platform that rises up on two levels. It held structures of a perishable nature. Archaeologists dug tunnels beneath the platform to determine earlier construction phases This also allowed them to search for tombs and other artifacts to help understand the timeline and history of the occupants. These tunnels are now open to the public.

The north side of the plaza is anchored by Structure 3. It is similar in design to Structure 10 across the plaza.

The northwest corner of the plaza has two, joined platforms that form a right angle to each other. These are Structures 4 and 5 and are believed to be of an elite residential nature. Each housed a structure, with some walls still intact, and was roofed with perishable materials. Several burials have been located within the platform. Remains of a still functional drainage system are associated with Structure 5. A series of small mounds completes the west side of the plaza.

The main structure in Plaza C is Structure 31. This structure is of a pyramidal design and rises up on three levels. It displays six construction phases, and reaches a height of 16 feet/5 meters. A degraded, two-chambered temple structure crowns the summit, the main chamber containing a bench. There are stairways on all four sides of the structure with the main stairway facing Plaza C. In front of this stairway is an altar-stela complex. The stela presents no glyphic information, and may never have been carved with any. The east side of the structure faces onto a small plaza.

The south side of Plaza C has low, range type mounds, while the north side of the plaza has a small pyramidal mound. The north side mounds of both Plaza B and C in turn face onto two smaller unexcavated plazas. To the north of these two plazas, and outside of the core ceremonial/civic area, is a small residential courtyard surrounded by a number of restored, low housing platforms including Structures 204 and 205. Further to the north other residential compounds have been detected, most notably Plaza P which features four mounds. 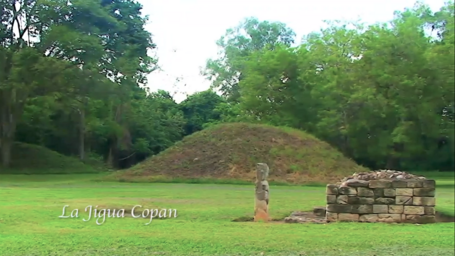 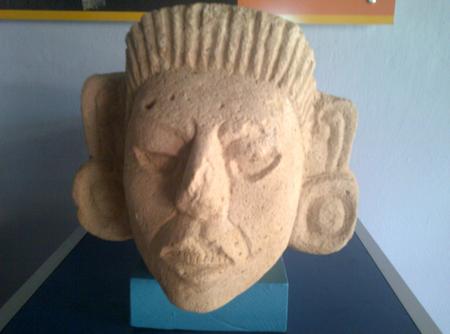 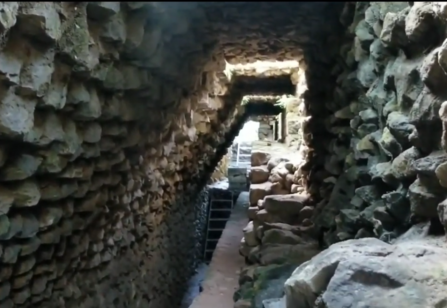 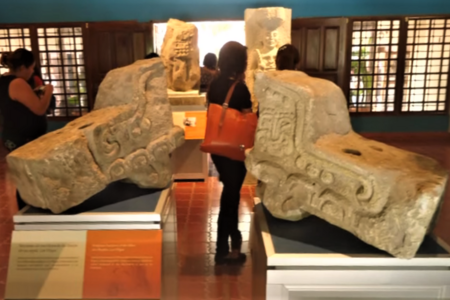 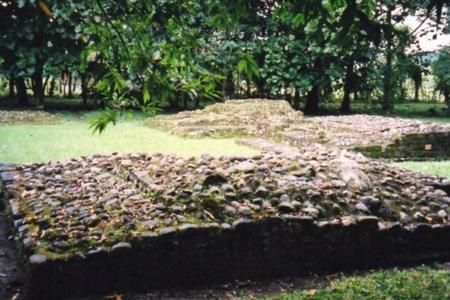 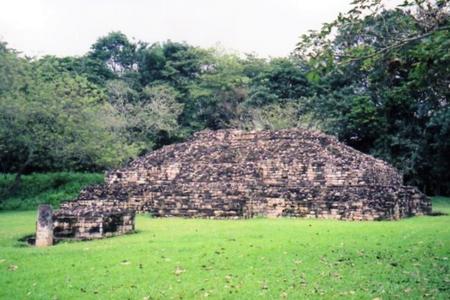 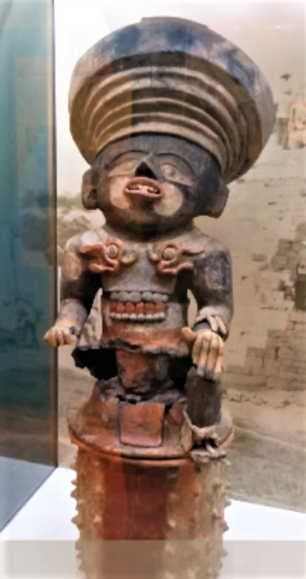 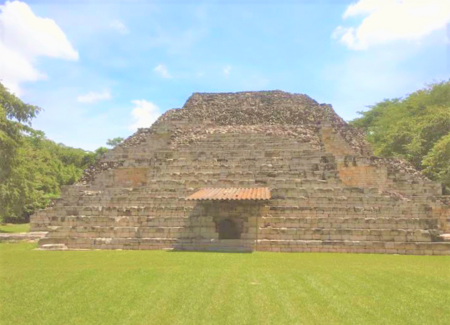 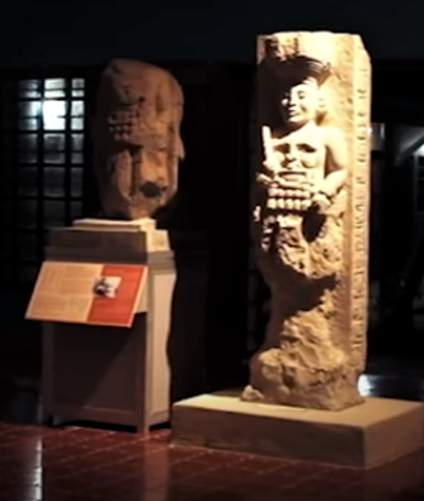 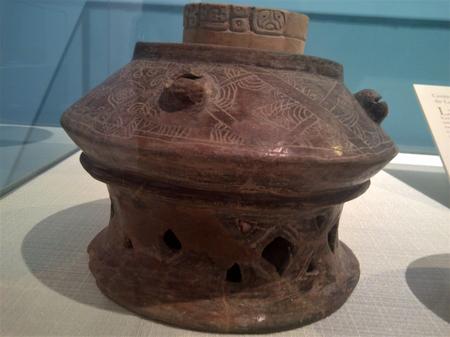 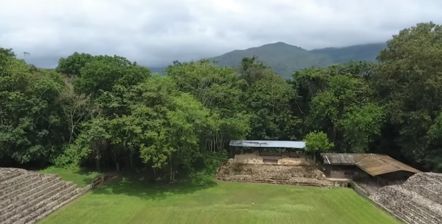 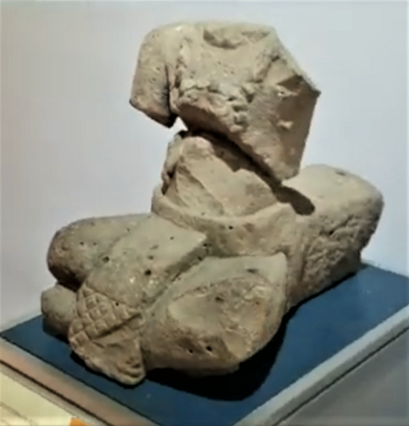