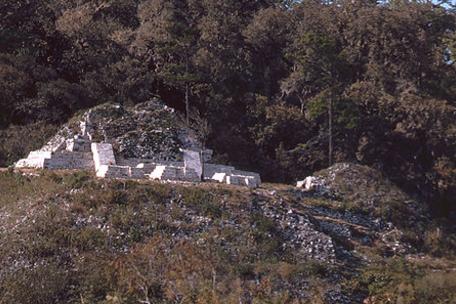 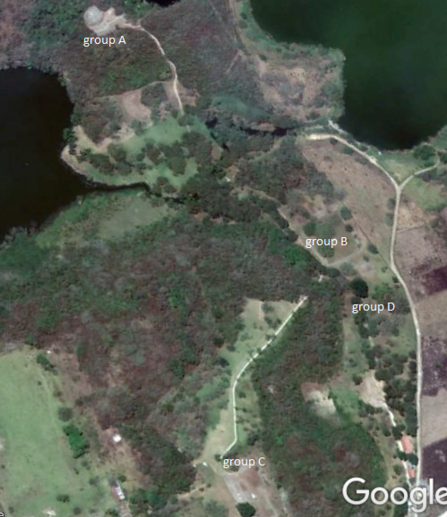 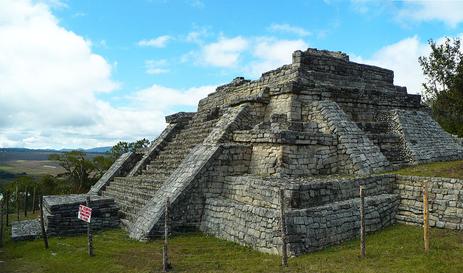 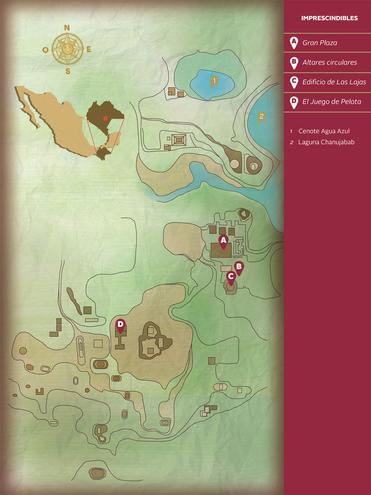 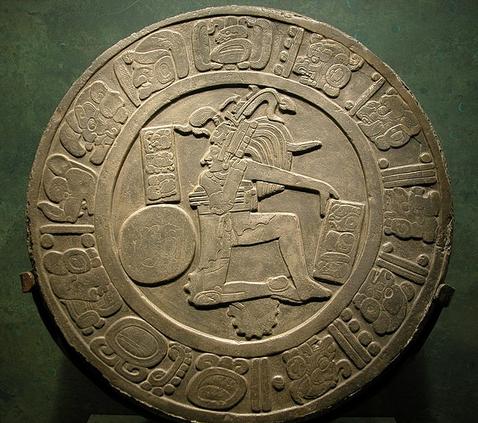 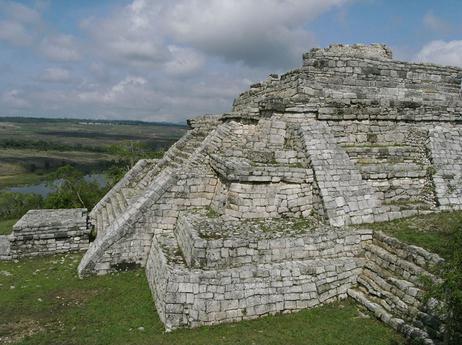 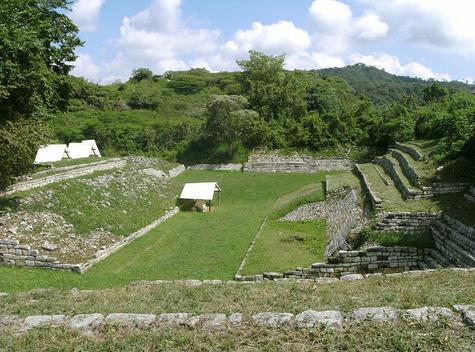 DESCRIPTION
Chinkultic, Cave with Descents or Stepped Cenote in Maya, is a seldom visited, medium size archaeological zone located in the Eastern Highlands near the Lagunas Montebello National Park. It is some 28 miles/46 kms southeast of the city of Comitan (from San Cristobal de las Casas 75 miles/122 kms) and was inhabited from the Late Pre-Classic (300 B.C. – 200 A.D.) through the Early Post Classic (1100 – 1250 A.D.). The site contains over 200 structures, 38 recovered stelae, and the largest cut stone building blocks known in Mesoamerica.

Four main groups of structures are spread out over 100 acres/40 hectares. The structures are very similar to those found at the larger, nearby site of Tenam Puente. Many of the structures are built into the sides and leveled summits of the interspersed hills in a most harmonious way using retaining walls and terraces. It is aligned along a northwest/southeast axis.

The site is set between two lakes, Lake Tepancuapan and Lake Chanujabab, and amongst a series of low hills and outcroppings at an altitude of over 4800 feet/1,464 meters. A stream runs through the center of the site connecting the twin lakes. Beautiful, panoramic views are obtained from the pyramid platform of Group A. A very scenic setting.

Chinkultic is reached traveling south on Federal Highway 190 from the city of Comitan. At the town of Trinitaria take Route 307 east 19 miles/31 kms to the small village of Hidalgo. Take the first road north out of town a short distance to the site.

HISTORY AND EXPLORATION
Ceramic and sculptural evidence places the beginnings of Chinkultic to around 200 B.C. during the Late Pre-Classic (300 B.C.-250 A.D.). Some sculptural features are similar in style to those found at the important site of Izapa located along the Pacific Slope. The site reached its apogee during the Late Classic period (600-900 A.D.) when most of the structures seen today were built.

Numerous stelae contain glyphic information with reference to the rulers of the site, and which date between 561 A.D. to a late 874 A.D. Unlike most Maya Lowlands sites, Chinkultic was inhabited into the Late Post Classic (1250-1521 A.D.). The site was abandoned in the 14th century.

The first recorded visit to Chinkultic was made by Edward Seler in the 1890’s. He was followed by Frans Blom and Oliver la Farge of the Tulane University expedition (1925); Enrique Juan Palicios (1926); and Eric Thompson and Sylvanus Morley (1944) among others. In 1969 INAH dredged and explored the Agua Azul cenote and recovered numerous artifacts. Major restoration projects have been carried out by Carlos Navarrete of the Autonomous University of Mexico.

STRUCTURES
The site contains four main groups of structures. There are other smaller groups and individual structures, mostly in an unexcavated state, found throughout the site.

Group A is at the far northern end of the site, and is known as the Acropolis. It is set into the side of a hill and is the highest group at the site. Behind this group is the Agua Azul cenote. A steep drop-off on the east side of the hill descends down to Lake Chanujabab and to a small group of structures thought to comprise a residential area.  A panoramic view of the entire site as well as the plains of Comitan and distant mountains are viewed from here.

A monumental stairway leads up from the valley floor to a created level area which has been built out with retaining walls. Six structures occupy a pyramidal platform.

The largest structure here is Structure 1 also known as El Mirador and is located at the north end of the platform. It is a stepped pyramid accessed by a south facing two-tiered stairway flanked by sloping balustrades. Stairways on the east and west side of the pyramid reach up to a lower terrace. A ruined series of chambers crowns the pyramid. On either side of the pyramid are adjoining terraces which may have once housed structures of perishable materials.

At the bottom of the pyramid stairs is a low altar/platform. Three other small platforms are arranged in front of this at the head of the monumental stairway. A number of burial urns have been discovered within the platforms dating to the Early Post Classic (1100-1250 A.D.). Fragments of Stela 19 were found here that display elements of Izapa style iconography.

The east side of the Acropolis is taken up by a multi-tiered platform with the remains of a chambered structure atop. In front of it retaining walls extend along the hillside.

At the bottom of the stairway is a plaza containing four raised platforms of different size. A trail leads south from here crossing a stream to Group B.

Group B, also known as Plaza Hundida, is a large plaza measuring about 188 feet/57 meters square. Three pyramid platforms about 33 feet/10 meters in height take up the north side of the plaza. Low ranging platforms form the other three sides. Behind the south end of the plaza is a single platform structure. Further beyond is Group D.

Group D is a partially excavated area set about a plaza. The most notable structures here are a large pyramidal platform base and the Lajas platform. The Lajas Platform is constructed using huge stone blocks weighing up to several tons each, and measuring some 8.5 feet/2.6 meters x 130 feet/40 meters. These blocks are the largest known cut stone blocks in all of Mesoamerica.

The path continues on in a semi-circle to Group C. This group is centered about a large plaza with a few structures of note. The largest number of stelae are located throughout this group. The most important structure here is the Ball Court. It measures 188 feet/57 meters in length, and a very narrow 16 feet/5 meters in width. The “end zones” of the ball court are expansive, with the north end much larger than the south end, typical of the Eastern Chiapas Highlands. The incorporated structures rise up on a set-back, and have a number of open-air chambers, the whole structure of finely cut stone with some stucco remains. A stela is located at the base of one side of the ball court.

The famous Chinkultic Ball Player disk was actually discovered in nearby Colonia La Esperanza. It was discovered during demolition of a modern house. How it got there is unknown. A glyphic reading of the disk refers to a Lord of Chan who has been associated with Chinkultic. The disk is a beautiful example of Maya craftsmanship. There is a Long Count date on the disk that reads 9.7.17.12.14, 11 Ix 7 Zotz, and equates to May 19, 531 A.D. The date can be clearly read from the bar and dot numbers starting at the 1 o’clock position. The disk is currently housed in the Museum of Anthropology in Mexico City.

A small acropolis is located adjacent to the ball court on a terraced hillside. Three structures are located around a small plaza. An altar/platform is in the center of the plaza. Mounds of a residential nature are located further up the hillside.

The rest of the Ball Court plaza is surrounded by low, stepped platforms. The north platform contains six stelae, and the south side platform has four. There are numerous other residential mounds, and other smaller groups located throughout the site.

While looking over historic satellite imagery of the site, what appears to be a second ball court shows up quite clearly. This potential ball court structure is on private property to the northwest of the main Ball Court of Group C. Further research is required to ascertain this possibility (see map image). 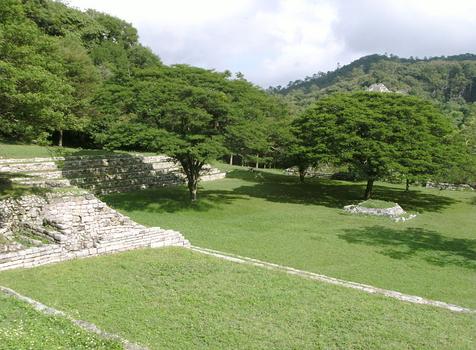 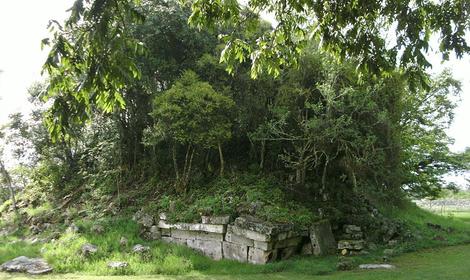 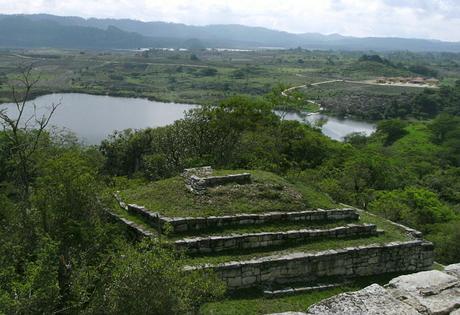 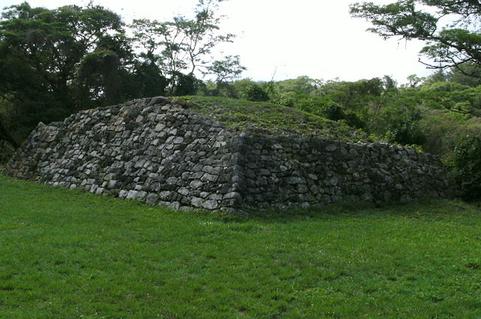