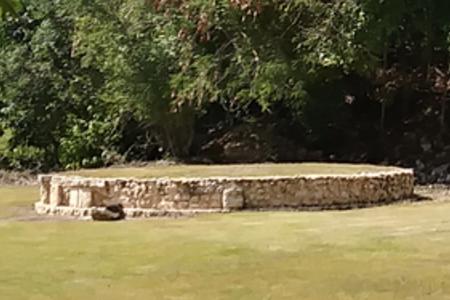 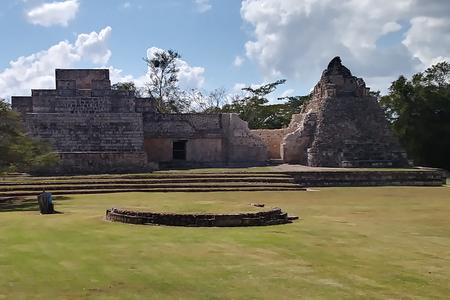 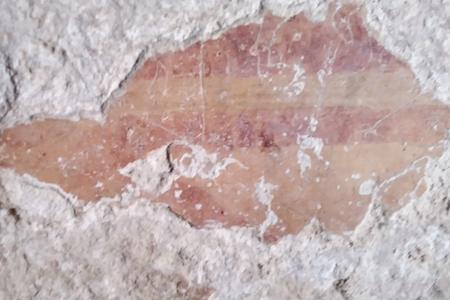 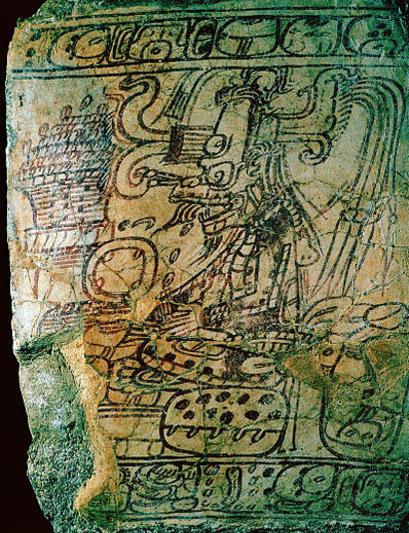 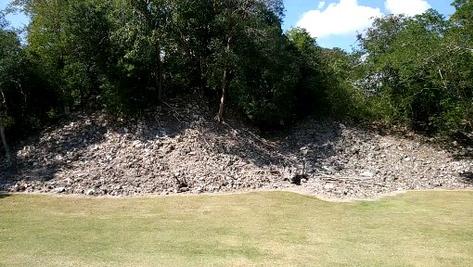 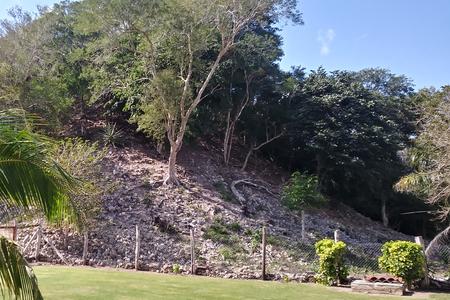 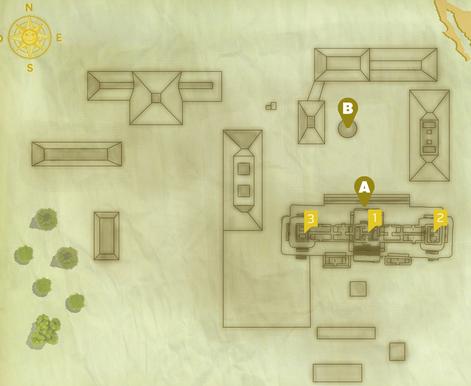 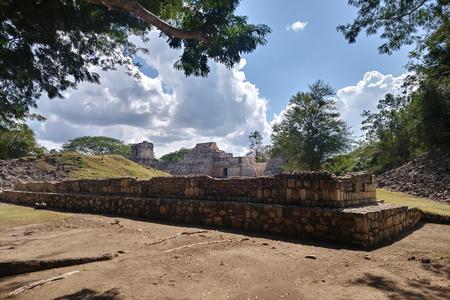 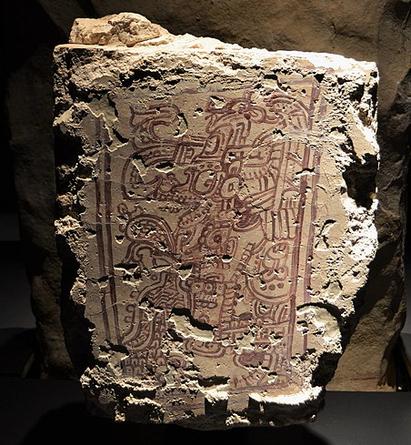 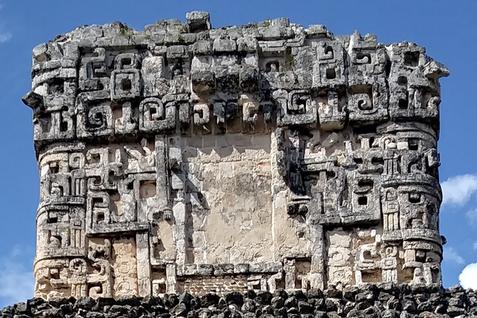 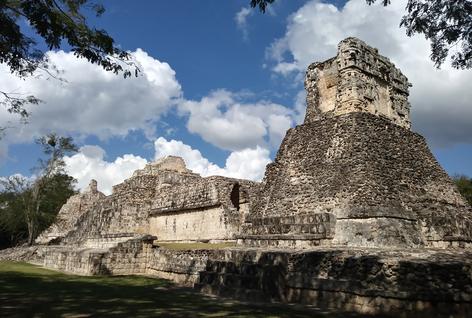 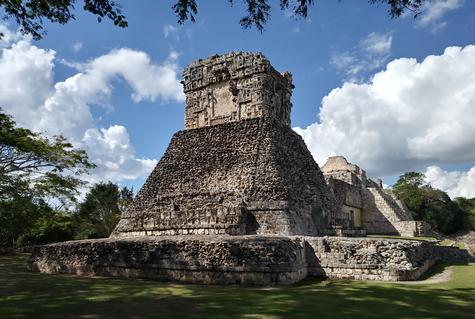 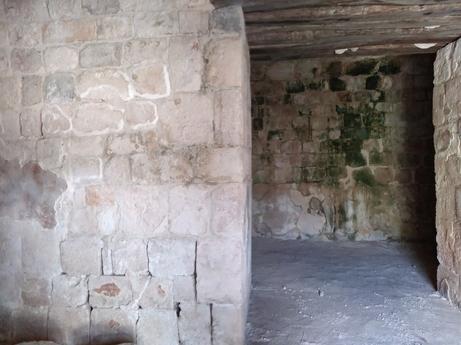 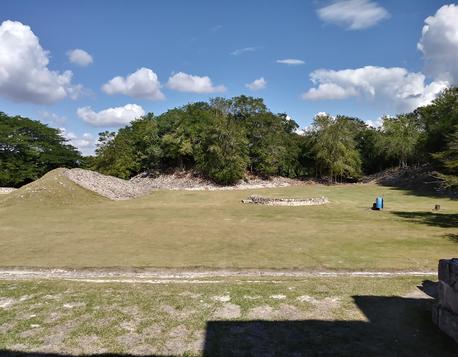 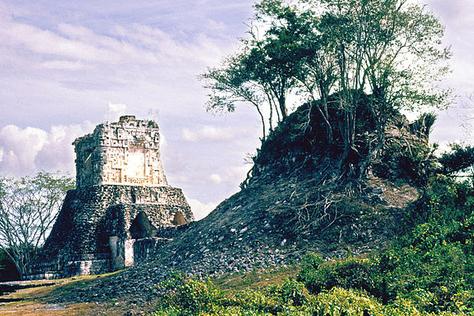 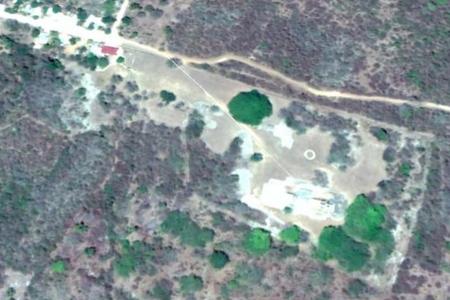 DESCRIPTION
Dzibilnocac, “painted vault” in Yucatek Maya, is a Chenes archaeological zone located within the modern town of Irtubide (Vicente Guerrero). Parts of the site are now buried under the sprawl of the town with the current area now confined to about 1 km square. While the architectural motifs mostly express a Chenes style, identified by the profusion of elaborately decorated facades, the main Palace has a distinct Rio Bec design.

There are two main groups of structures along with other outlying smaller groups. Two stelae have been recovered that have readable dates of 731 A.D., and a fragment of another with the year 764 A.D.

From Campeche the site is reached by taking Highway 281/262 west to the town of Hopelchen. From there drive south on Highway 269 to Dzibalchen. Follow the signs out of town to Vicente Guerrero/Irtubide. Once in the town center signs will direct you to the site via Calle 9.

HISTORY AND EXPLORATION
Ceramic evidence places Dzibilnocac back to the Middle Pre-Classic (600-300 B.C.) around 400 B.C. The site grew in importance and became a regional capital during the 8th century of the Late Classic (600-900 A.D.). It was part of the general decline that affected many Maya sites and was mostly abandoned by 1000 A.D.

The stelae recovered have not been deciphered, outside of calendrical dates, to determine the names of its rulers and its associations with other sites. However, the different architectural styles including Chenes, Rio Bec and Puuc, indicate a wide-ranging interconnection. When this information becomes available it will be included here.

Dzibilnocac was first reported on by that dynamic exploration duo of Catherwood and Stephens in 1842. The next explorations were undertaken by Teobert Maler in 1887 who took the first photographs of the site. There followed Harry Pollock in 1936; George Brairned in 1946; and Ricardo Robina of INAH in the 1950’s, along with others. In 1982 INAH began restoration of Structure A-1 and again in 2002, 2011 and 2013. In the 2013 season a game board known as “patolli” was discovered upon a floor within the central pyramid/tower of Structure A-1.

STRUCTURES
In 1842 Stephens recorded 34 mounds. There are about two dozen or so mounds that currently make up the core area of the site today. These are formed around two main plazas, along with other smaller groups. Most of the constructions were built between 600-800 A.D.

The principal structure of the main group is Structure A-1, the Palace. This is the only structure that has seen significant restoration. It is very similar in design to Structure 1 at Xpuhil, and has some similarities to Structure II at Chicanna, both in the Rio Bec area of Campeche.

Structure A-1 rests upon a large platform measuring about 250 ft/76 meters in length by 98 feet/30 meters wide on an east/west axis. It commands two sub plazas. The platform exhibits some nice rounded stone corners. On the plaza side a broad series of steps leads up to the structure.

There were two construction phases. The first involved a long, double chambered building containing 10 corbel vaulted chambers. Stairways were placed on the north and south side of the platform terrace. The second phase involved the construction of temple towers at either end, and a central pyramid tower.

The temple towers have been mostly restored especially the east tower. The east tower has the remains of stairways on three side that at one time led to the summit. Both towers have a square temple located atop the summit with four doorways. Two of these are false doorways and the other two lead into a chamber. All four sides around and above the doorways are intricately decorated with mosaic monster masks. The corners display an array of stacked Chac masks. Very impressive!

The central pyramid tower has been recently restored. A grand stairway ascends the structure from both sides. The remains of a mask of the earth deity, Itzamna, has been located at the base of the platform. Recent excavations turned up the patolli game plan found on a floor level, along with the remains of painted flora and fauna. A number of painted capstones featuring the Maya god K’awill, and two sculptured figures were also located here and are now housed in various museums. At ground level on the south side of the central pyramid tower stairway are the remains of two structures having a single entryway.

Two chambers that flank either side of the central pyramid tower stairway are still intact. Inside, one can still see traces of horizontal bands in orange/red and purple/blue. There are several minor mounds located behind Structure A-1.

A sub-plaza, here called the East Sub Plaza, measures about 175 feet /53 meters x 99 feet/30 meters and extends northward to a series of unrestored, low mounds. A second sub-plaza, here called West Sub Plaza, has at its center a recently restored circular platform/altar. It measures about 26 feet/8 meters in diameter, with a height of about 3 feet/1 meters. It was originally stuccoed and possibly painted. There is a set of stairs on the west side. The plaza also has about five mounds of different height that enclose its sides.

To the west of the West Sub Plaza is another series of mounds set about a plaza, here named the West Plaza. Only one structure here has been partially restored, here called the north structure. It is of a linear design showing three chambers that face south onto the plaza. A restored platform/altar is also located here similar to the one in the West Sup Plaza.

At the far west end of the core site are other mound groups some of them on private property. One of them has a good height of about 18 feet/5.5 meters and may have been a pyramid. Upon entering the property and examination, no standing architecture or set stone was observed.

Across the road from the core site, and to the west, a number of mounds have been reported. This is an interesting site that could be combined with visits to nearby Hochob and Tabasqueno. ​ 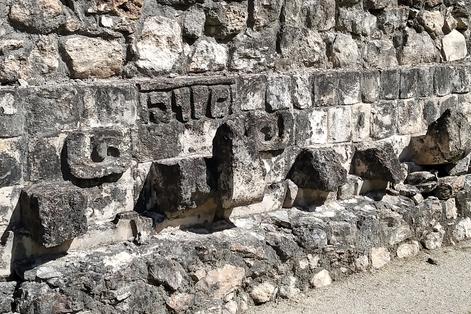 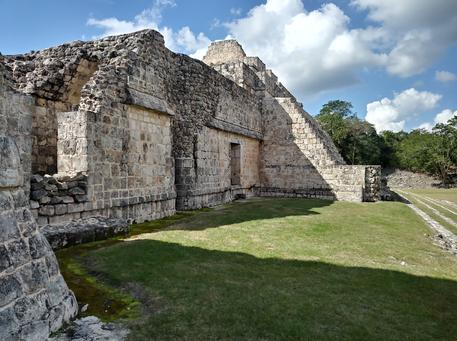