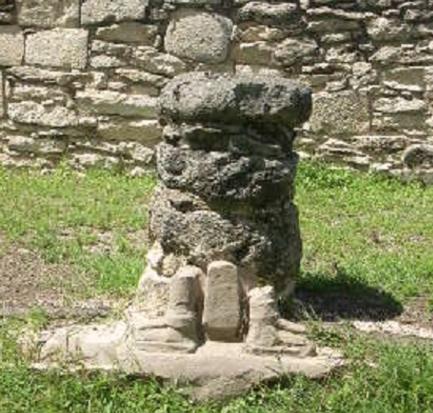 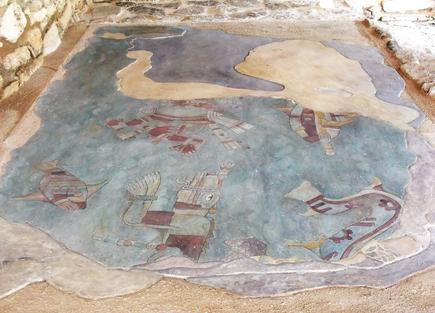 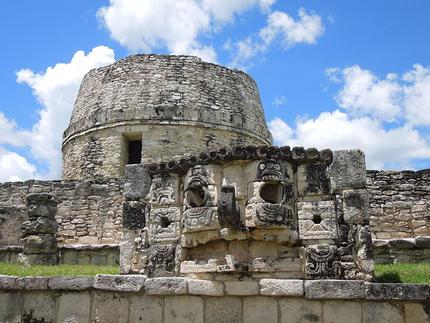 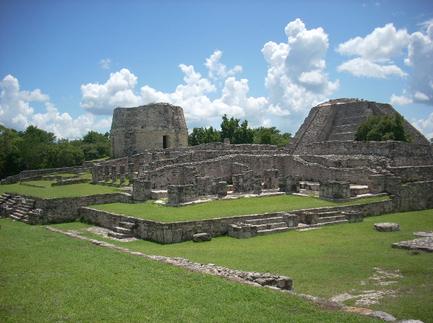 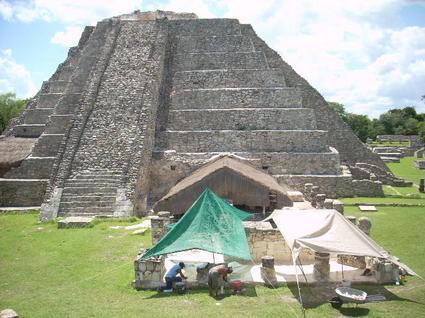 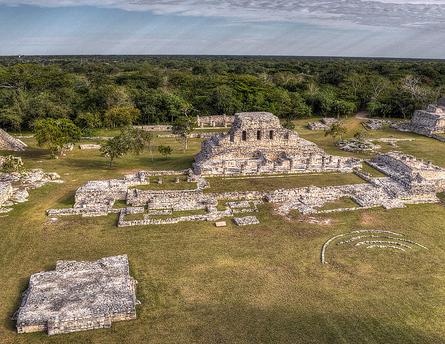 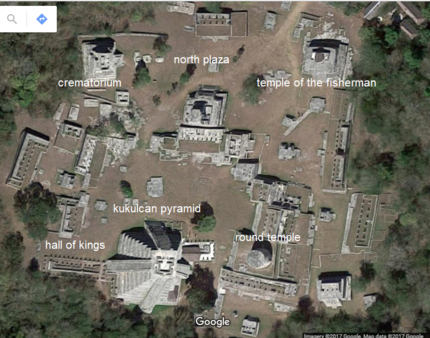 round temple and & temple of kukulcan      steve mellard

view of temple of the painted niches          pavel vorobiev 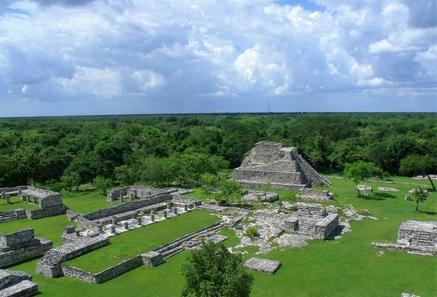 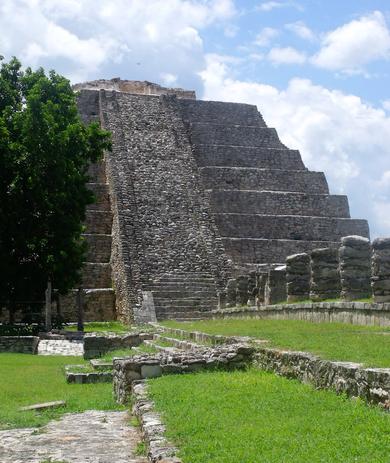 DESCRIPTION
Mayapan, is a seldom visited walled Post Classic (950-1500 A.D.) compact site. It is located in west central Yucatan just off Highway 18, south of Merida along the “Convent Route”. The site encompasses 2.5 square miles and contains about 4,000 structures, though the core area is easily visited. The population at its peak is thought to have been around 12,000 inhabitants.

There is on-going excavation work being performed, most recently on the western platforms behind the Pyramid of Kukulcan. This was the last capital of the Maya and it has a wonderful layout.   There are some oscillated turkeys that hang around at the turnoff to the site. Give them a “gobble gobble” and they’ll answer you. This is a site that should not be overlooked.

HISTORY AND EXPLORATION
Mayapan is a Post Classic Period (950-1500 A.D) site that lasted until the 15th century, when it was destroyed and abandoned through internal strife. Continuing excavations appear to be pushing the date of founding further back. There is ceramic evidence of earlier underlying settlement. In many aspects it mimics the architecture at Chichen Itza, the earlier, great Maya site in central Yucatan. It was a shared capital between the two major cultural groups of the time period, the Xiu and the Cocom.

Despite the fact that the city was wracked by civil war in the end, it was a vibrant cultural and economic power. Long distance traders and foreign ideas were welcomed into the city. There is evidence of Aztec influence in some of the mural paintings. It has even been suggested that the Aztec had their eye on the city as a future vassal state. The city had a cosmopolitan atmosphere and an expanded world view.

There was however, apparently low level feuding between these groups which eventually broke out into open warfare. The Xiu, perhaps, felt they were being marginalized. Some of the construction at the site seems to support this as certain buildings intruded into older sections and blocked them off from their ceremonial precinct. The main focus of this feud seems to have been with the Ahau Katun calendar used by the Maya at this time. Both groups had different beginning and ending calendar dates which caused the same ritual events to be held at different times. There was an attempt at a compromise, but still it was insufficient.

Ultimately, as told by the chronicles, during an auspicious twenty year time period known as Katun 8 (1440-1460 A.D), the Xiu revolted and wiped out the ruling Cocom. The Xiu later abandoned the site and returned back to their homeland in the Puuc Hills. The feud didn’t end there however, and continued into the Spanish Colonial Period, to the benefit of the Spanish.

An infamous event took place during the early part of the Colonial Era. During an extended drought the Xiu wished to undertake a pilgrimage to the sacred well at Chichen Itza to make offerings. They were granted safe passage by the Cocom who controlled Chichen at the time. At the site of Otzmal the entire pilgrimage group, which included important Xiu dignitaries, was wiped out by the Cocom.

The first reports on the site were done by the explorers John Lloyd Stevens and Frederick Catherwood in the 1840’s. This book, Incidents of Travel in Yucatan, is an amazing read and contains some very well executed and accurate engravings.

There are a few cenotes (natural wells ) within and without the core center. There have been reports of rain ceremonies still being performed at one of the more remote cenotes.

The small neighboring town of Telchaquillo has an ancient church at its entrance. It was common practice throughout Spanish Mexico to use the ready cut stone blocks from the “pagan” structures to construct their churches and other buildings. It is interesting to see here some of the ornamented stone blocks from Mayapan conspicuously placed on the façade of the church. The Mayapan area was quite a distance from Merida in the 1500’s, and the isolated Catholic priests were perhaps attempting to appease the local indigenous people by incorporating these architectural relics into their church.

In front of the pyramid is a series of stone markers that form a semi-circle, with the closed end facing east. No reason for this layout has been offered, though it may have had solar implications.

Adjacent to the north side of the pyramid is a series of columns called the Hall of the Kings that again reminds one of the same type of grouping found at Chichen, but on a much smaller scale. The interesting thing to note here is that at the base of some of these columns are the remains of original stuccoed feet. It is reported that during excavations molded stucco faces were recovered that once graced the columns. It is amazing to think that these now plain columns once were graced with full sized stucco representations of warriors, priests, or kings. With the similarities to Chichen Itza in some of the structures one can only imagine if the Temple of a Thousand Columns was once similarly adorned. It would have been a stunning sight.

Attached to the pyramid on the south and east sides are some small structures. One, the Room of the Paintings, contains the still visible remains of wall murals. In the plaza in front of the pyramid are a series of small platforms, the largest being dubbed the Dancers Platform.

Off the southwest corner behind the pyramid is the Temple of the Cenote, Chen Mul, built around a cenote of the same name. This structure is rather early in design and showing clearly Puuc architectural influence. It is here on this building that one can see some of the same decorative carved stone motifs as were incorporated into the façade of the church at neighboring Telchaquillo

To the south of the pyramid is a temple complex on a raised platform. Most prominent of the structures here is the Round Temple reminiscent of the Caracol at Chichen Itza. This is a very stark, plain, solidly built structure with entrances on all four sides. These entrances open to a pathway that leads around the interior. The purpose of the building has not been confirmed as it could not have been used as an observatory as was the case with the Caracol.

On the southeast side of the Temple of the Niches is the Temple of the Fisherman. This important and well known structure has a beautifully painted floor with still vivid colors depicting a range of marine creatures. A must see at this site.

There are a number of other structures and platforms throughout the site, the most interesting being a small truncated pyramid called for some reason the Crematorium. This is a very well maintained, enjoyable site, with a fascinating history.