DESCRIPTION
Zaculeu, “White Earth”, is an Early Classic (200-600 A.D.) archaeological zone located on a hilltop plateau protected by ravines, and a river that runs along the north and west side of the core area. It was situated on an important trade route linking the Central Highland site of Kaminaljuyu to the Central Mexican site of Teotihuacan. The site was the Western Highlands capital of the Mam Maya kingdom, and was continuously occupied until its defeat by the Spanish invaders in 1525. There have been no stelae, carved altars, monuments, or any evidence of glyphic inscriptions found here. There has been only one mural discovered so far. The ceremonial area is still used today by small groups of the local Mam Maya for ritual purposes on special occasions.

The civic/ceremonial center is rather compact (10 acre/4 hectares), and there are a total of 43 structures grouped around a series of plazas. The architecture as viewed today dates from the  Terminal Classic through the Post Classic (900-1525 A.D.).

The site is easily reached from Guatemala City north on Highway CA-1 to Huehuetenango. From there it is about 2 miles/3 kms to the site.

HISTORY AND EXPLORATION
Zaculeu was settled as an Early Classic (200-450 A.D.) ceremonial center, though little remains of these earliest structures. The architecture from this period shows strong Central Mexican influence. Construction activity continued throughout the Classic period (200-900 A.D.) on through to the Spanish Conquest, and was one of the last Maya strongholds.

The Mam Maya of Zaculeu were in a constant rivalry with the neighboring K’iche Maya, with the K’iche defeating and occupying the site on at least two occasions beginning in the 12th century. The K’iche were in control of the city for the final onslaught by the Spanish invaders in 1525. The city was not conquered, but fell victim to a prolonged siege, with the last K’iche king, Kayb’il Balam, surrendering to the Spanish in October, 1525. There was a subsequent rebellion and the city was burned with the population forced to relocate to nearby Huehuetenango.

The site was first investigated by those intrepid explorers John Lloyd Stephens and Frederick Catherwood in the 1840’s. A later investigation was undertaken by Sylvanus Morley in the 1930’s. The United Fruit Company undertook a restoration project in the 1940’s under the direction of John Dimik, and this is how the site is viewed today.

Some purists have decried the application of a modern stucco finish to the structure surfaces. On the other hand, the way the structures are viewed today is how the Maya would have finished them, and not left exposed rock as is seen at nearly every other restored site. Most all of them were finished with a coat of stucco in antiquity. The only other exception for a modern cement/stucco application may be the restored Structure 1 at the site of Tazumal in El Salvador, though this was mostly removed during recent restoration work.

STRUCTURES
The civic/ceremonial core is centered on a northeast-southwest axis. The structures here were formed with a fill/base of dried adobe, which in some cases was faced with stone. A veneer of stucco was then applied and usually painted. There are several structures that have lower level double stairways with some having a single central stairway to the summit. They also exhibit the tauld-tablero style of architecture indicative of Central Mexican influence.

Plaza 1 is located in the northeast quadrant, and has the most prominent structure located here. Structure 1 is an impressive Post Classic pyramid that reaches a height of 39 feet/12 meters, the highest at the site, and is located on the southeast side of the plaza. It rises up on 8 levels surmounted by a temple at the top with 3 doorways. The lower portion of the structure has a double stairway that reaches to the 5th level, and from there a smaller set of stairways extend to the summit temple. In front of the pyramid in the plaza are two small 2 tiered platforms.

An Early Classic tomb was discovered under Structure 1. This red-painted tomb contained a very rich offering of jade, pyrite mirrors, and ceramics.

Structure 6 is located across the plaza from Structure 1. This is a nicely restored 4 tiered platform with a temple on the upper level.

Structure 4 is located in Plaza 2 which is in the southeast quadrant. It is a truncated pyramid with a small temple at its summit, and flanked by two long galleries. There are benches that line the interior wall. A tomb was discovered here of a single individual, and contained obsidian knives, jade, ceramics and gold fragments.

Between Plaza 1 and Plaza 2 is Structure 13. This rectangular platform consists of three levels with a 3 room temple structure occupying the upper level. The first level is accessed by a double stairway. A single central stairway runs from the first to the third level.

The Ball Court is located behind Structure 13.  This has a raised playing field and the remains of two structures that formed the sides of the ball court.

Adjacent to the Ball Court and forming the central southwest quadrant is Plaza 8. Structure 2, the main structure, is an unrestored pyramid. There are several other smaller plaza complexes located around the core area.
​ 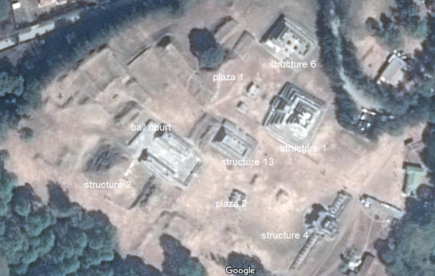 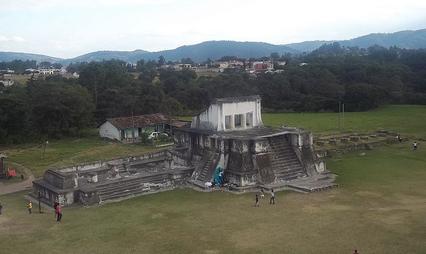 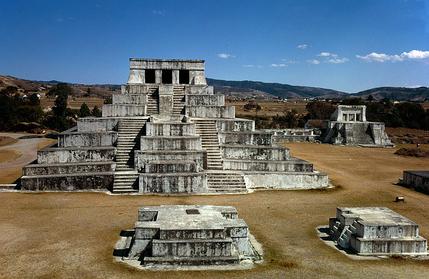 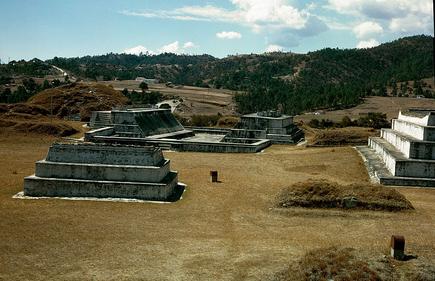 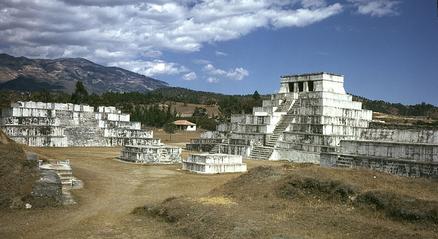 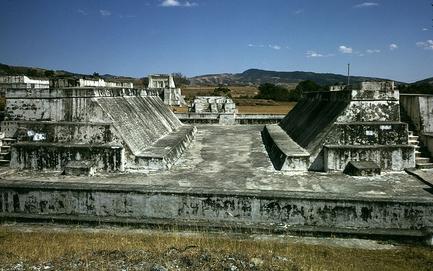